So one fine day, out of the blue, Dad decided to head down to Muar for a gastronomic food trip. A few years ago, we have done a couple similar trips where the main and sole purpose of the trip was to eat all the acclaimed food (usually found on the streets, old school kopitiam and no frills restaurants) in the particular area, nearby or on the way. We did Ipoh, Taiping and also Malacca. Top on my list is Penang, but we have yet to cover that.

This time around it was the Muar town because there was a local food show which featured the Muar town. Dad headed online to the food blogs for suggestions and guides on where to eat in Muar; he compiled a list of them and we were off to Muar. We started the trip early because we were told that these stalls are only open for breakfast and lunch. It’s a small town so the mornings are where the action is. The journey to the town took us three hours and we arrived just slightly before nine.
* * * * * * * * * * 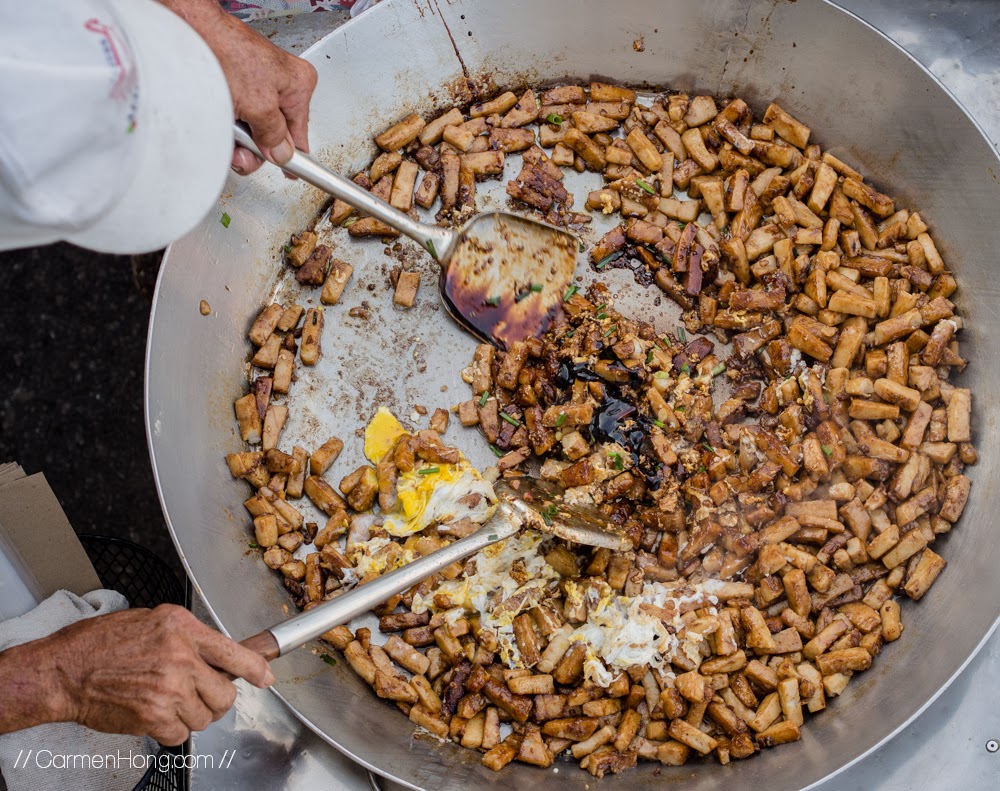 Fried Carrot Cake | Roadside stall, ftw.
Once we reached Muar town, we decided to go a few rounds around the streets to roughly know where the food places are and which roads they were on. After a couple rounds, we decided to park our car on a red street (the buildings on the street are all paint the same colour, so they are colour coordinated buildings on each street). When we got off the car, we saw a queue building up for fried carrot cake at a roadside stall. Since there were so many queuing up, we decided to join in and ordered one pack to eat and share. 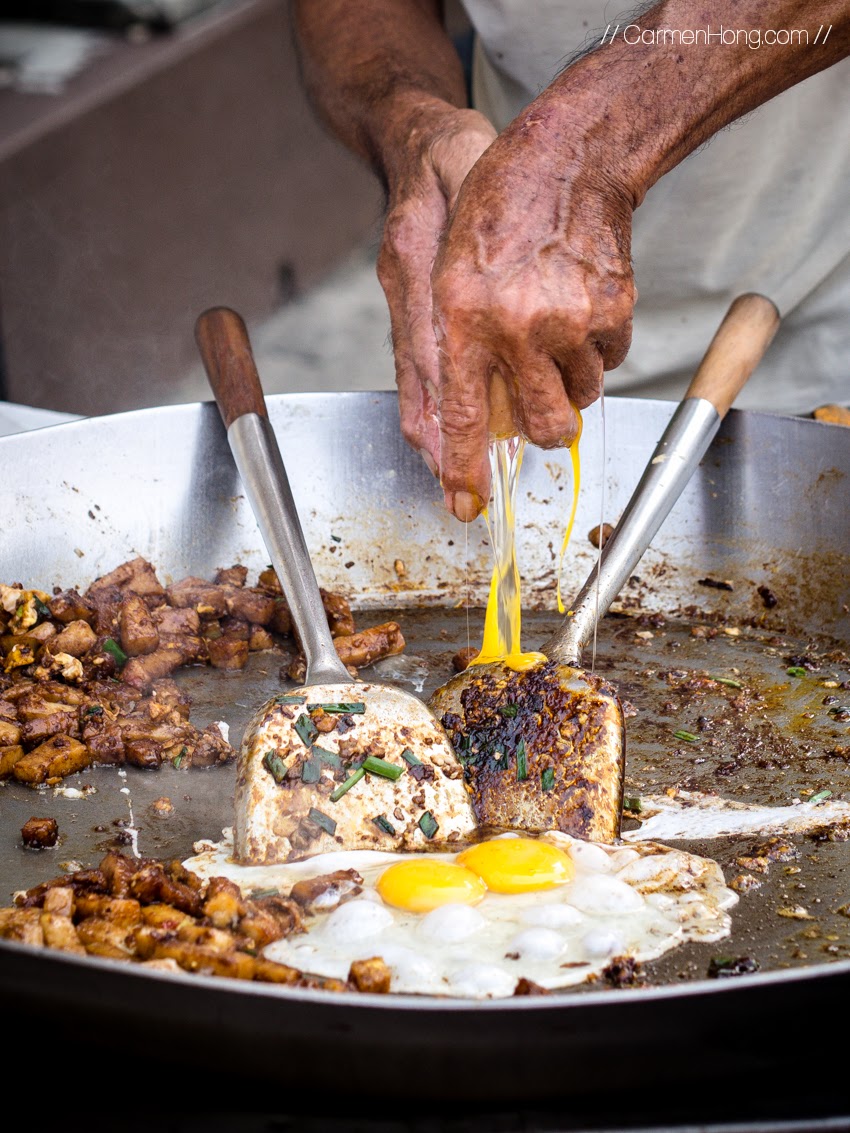 I found it extremely amusing to watch this uncle cook the carrot cakes, he was cracking like 5 eggs at one go and then frying them up with the carrot cakes. Like the earlier picture above, it looks pretty much like that and he was doing it on repeat. Scoop pre-fried carrot cakes in, fry them a little, add sauces, crack eggs and fry more. 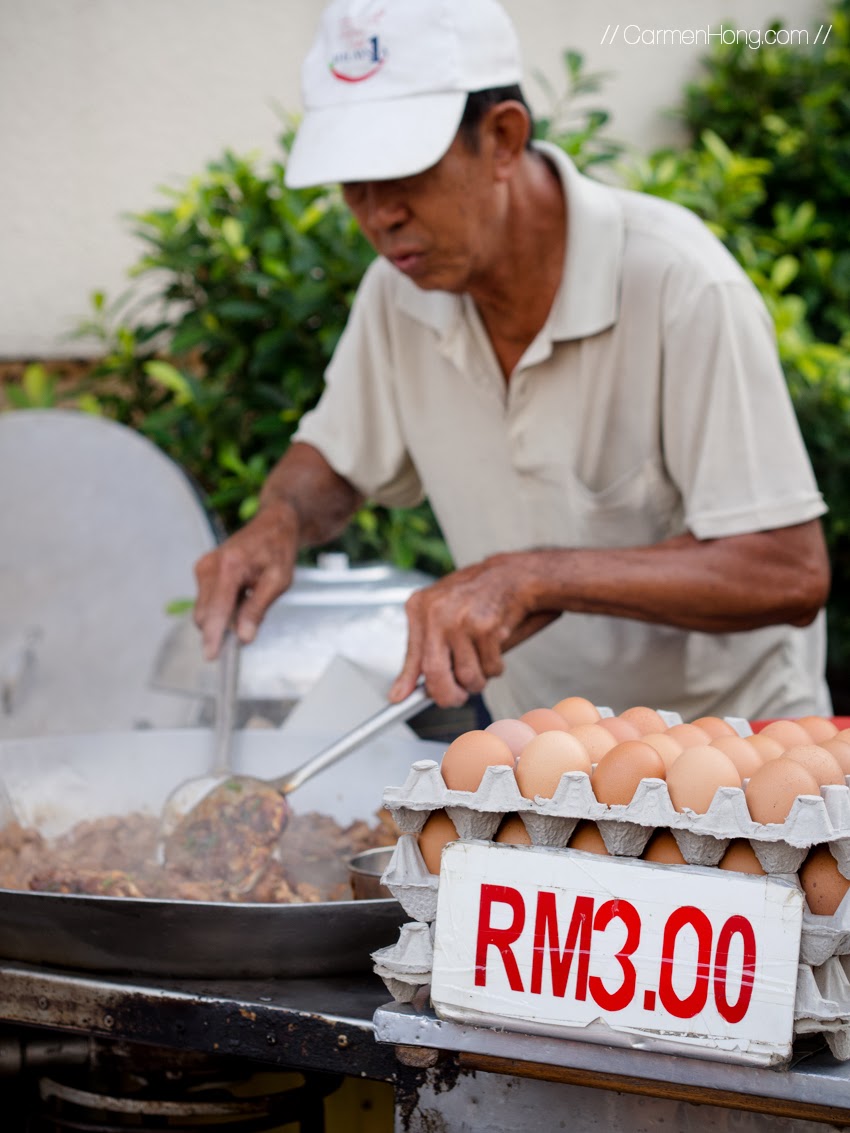 And all this for just RM3.00. Food is so much cheaper in small towns compared to bigger cities like Kuala Lumpur. I am not usually a big fan of fried carrot cake so what I can tell you that it was tasty and the style is different than the KL ones. Here, it is a milder version compared to KL. Oh, this was a roadside stall so there was no tables and chairs provided, the locals usually pack them up and eat them elsewhere like a local coffee shop. So, we continued walking around until we reached a local coffee shop.
Just a note before I move on: For this trip, I was shooting with my Olympus 45mm f/1.8 ED M.Zuiko Digital. I was pretty much in a hurry to get my shots, so the pictures are not as focused and clear as I wanted it to be. I am still learning how to use this lens for food, bit tricky. 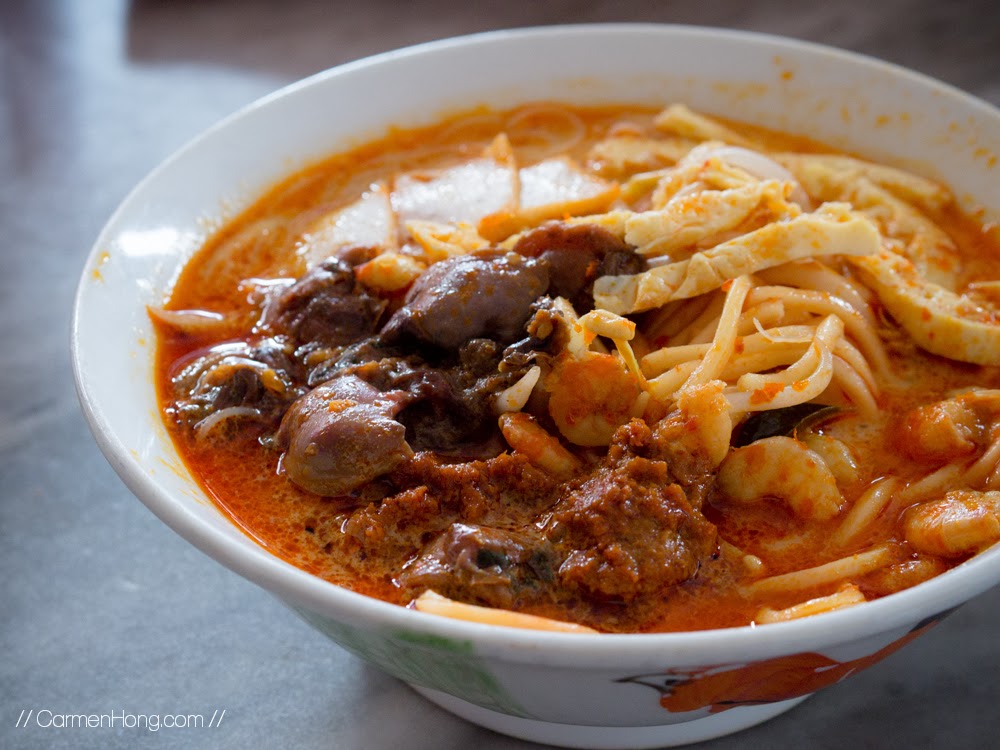 Muar Laksa | Hua Nam Chinese Kopitiam
When this arrived, it looks sinfully delicious. It probably also appeared that way for me because I was pretty deprived from ‘laksa’ for quite a while. Unfortunately though, this laksa, as good as it looks was rather disappointing. The soup wasn’t the thick, milky curry goodness I like. Taste wise, it was so bland, the Maggi curry flavoured instant noodles tasted better. =.= 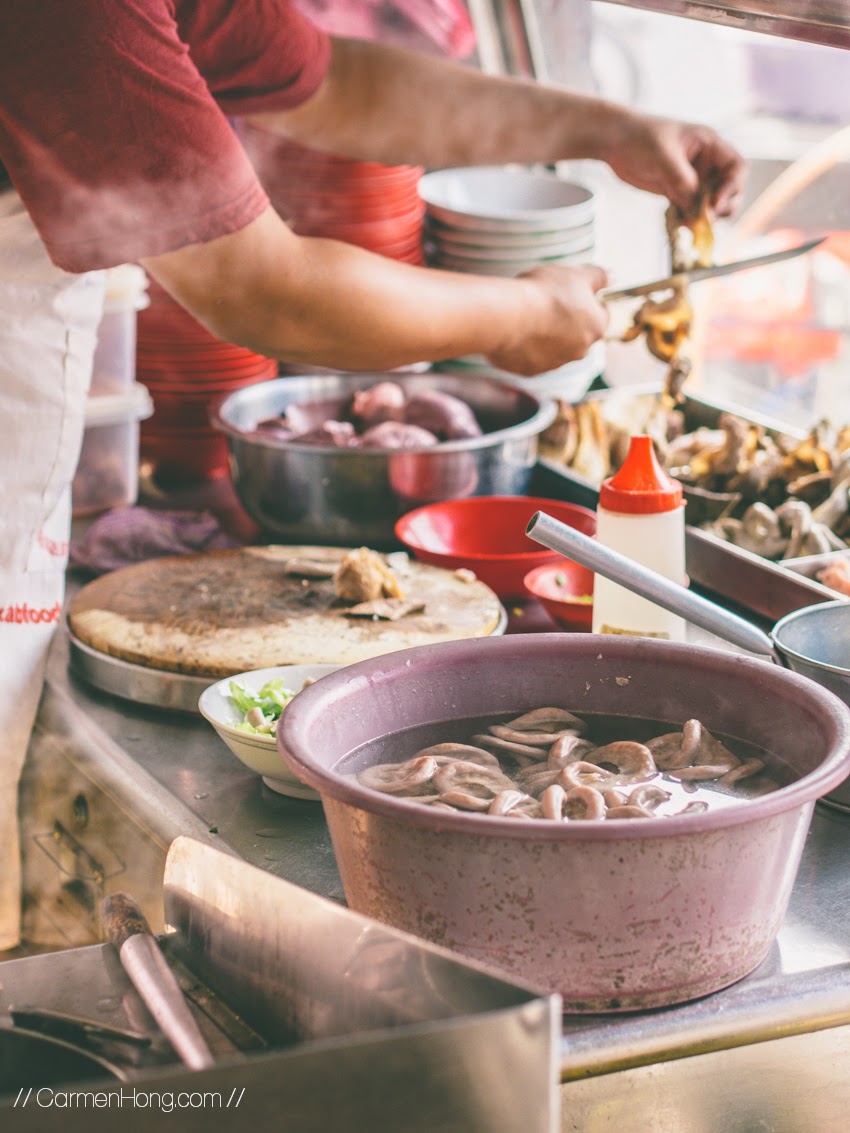 Mixed Innards Pork Stall | Hua Nam Chinese Kopitiam
I remember my dad saying that you can eat all parts of a pig, pretty much everything of or from a pig can be eaten. And in this stall, you’ll find at least five different types of innards of a pig. They didn’t have pig’s blood here though, but it was probably because it won’t go well in the soup. 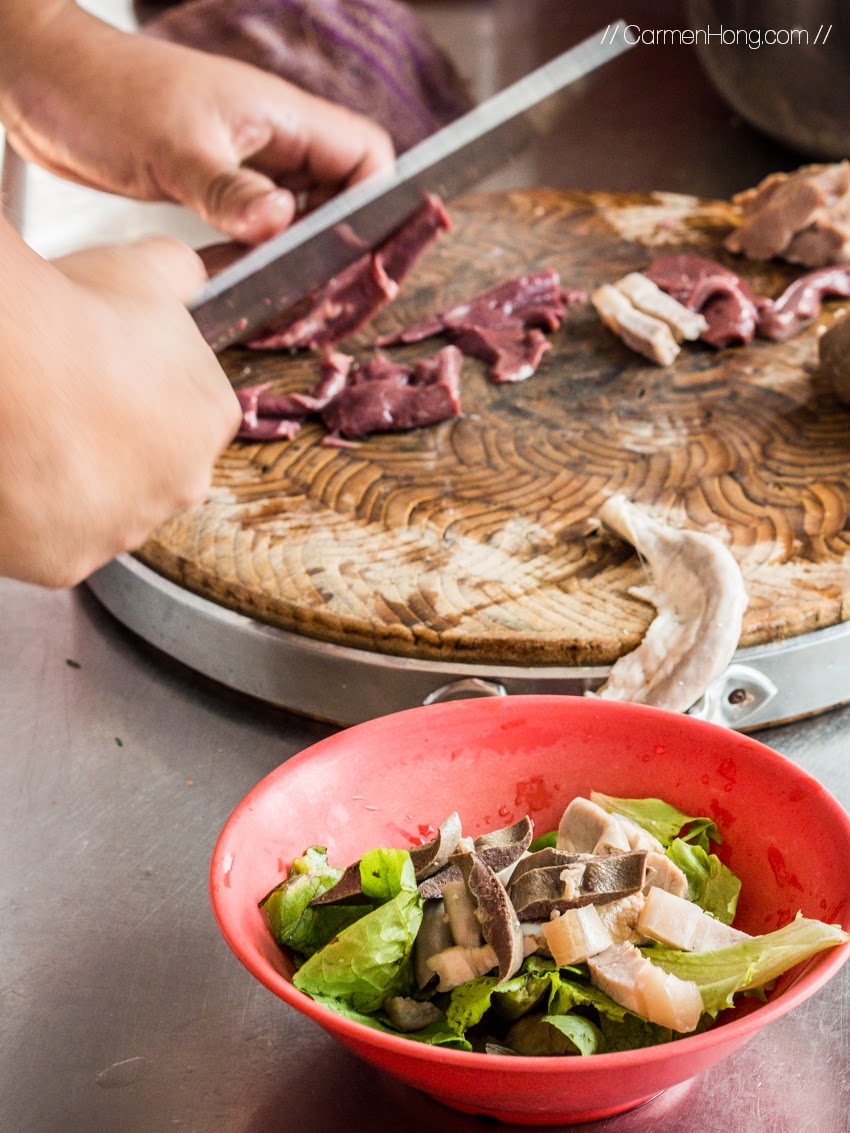 Mixed Innards Pork Soup | Hua Nam Chinese Kopitiam
The soup didn’t taste like much of overwhelming porky-ness, but it was a rather clear soup. There isn’t much to shout about this dish. This was served with a bowl of white rice. As for the innards, I don’t know how I should describe them further. While I don’t loathe them, I do sometimes enjoy eating them. So, this dish was fairly okay but not fantastic. 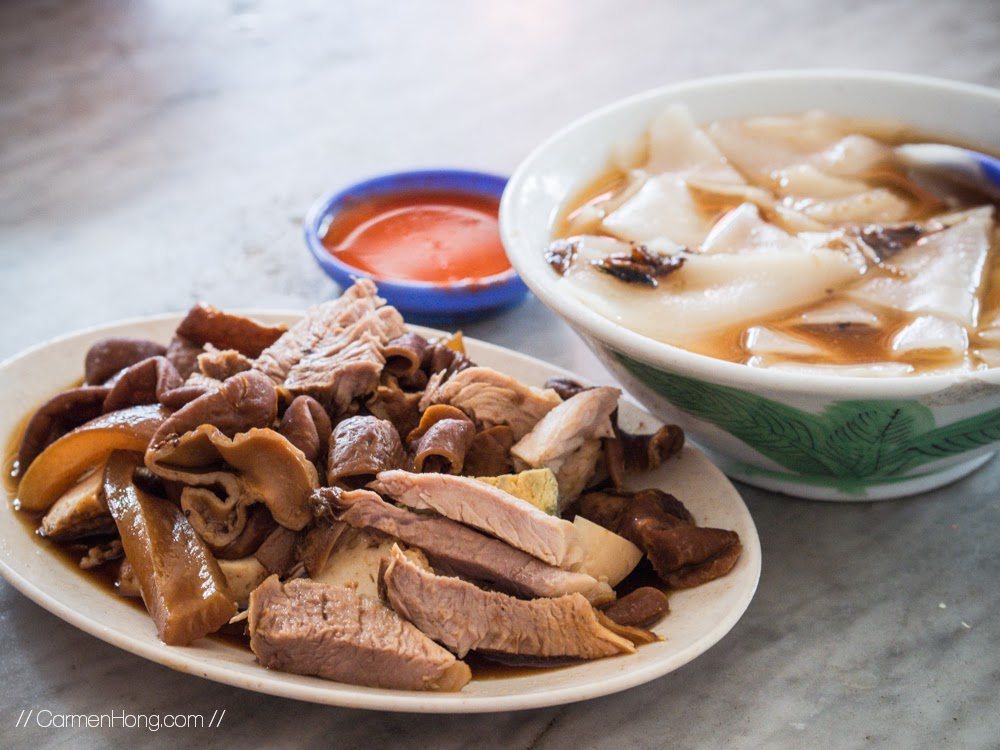 Kuey Chap | Roadside stall just right outside Hua Nam Chinese Kopitiam
I was introduced to kuey chap, a flat, broad rice sheets in soup, served with a mixture of braised pork meat, innards (yes, again!), tofu and eggs. I’m a rather huge fan of anything braised, especially braised duck, tofu and eggs. This was only my second time trying this, the first was in Damansara Uptown and I loved that. So, I have my expectation set against that. Having that as a comparision, I would say the taste for the kuey chap here was milder and there was less “kick” I would say. The plate of braised goodness, was nice nevertheless. Just that the soup fell short. 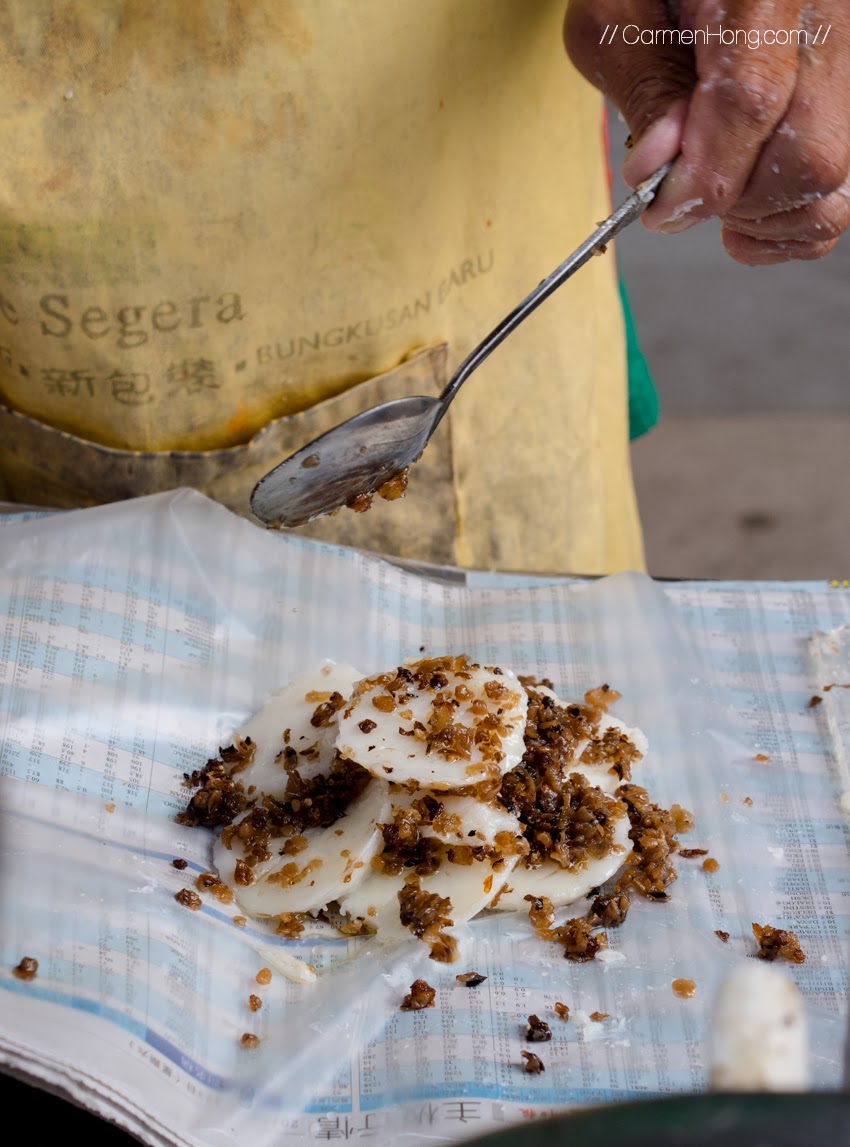 Steamed Rice Cake With Preserved Radish | Roadside stall just right outside Hua Nam Chinese Kopitiam
I have always fancied these rice cakes ever since I was young. The ones sold in KL are the size of flat bowls and the topped with a mixed of salty and sweet preserved radish. But in Muar, the rice cakes are really really ridiculously tiny. 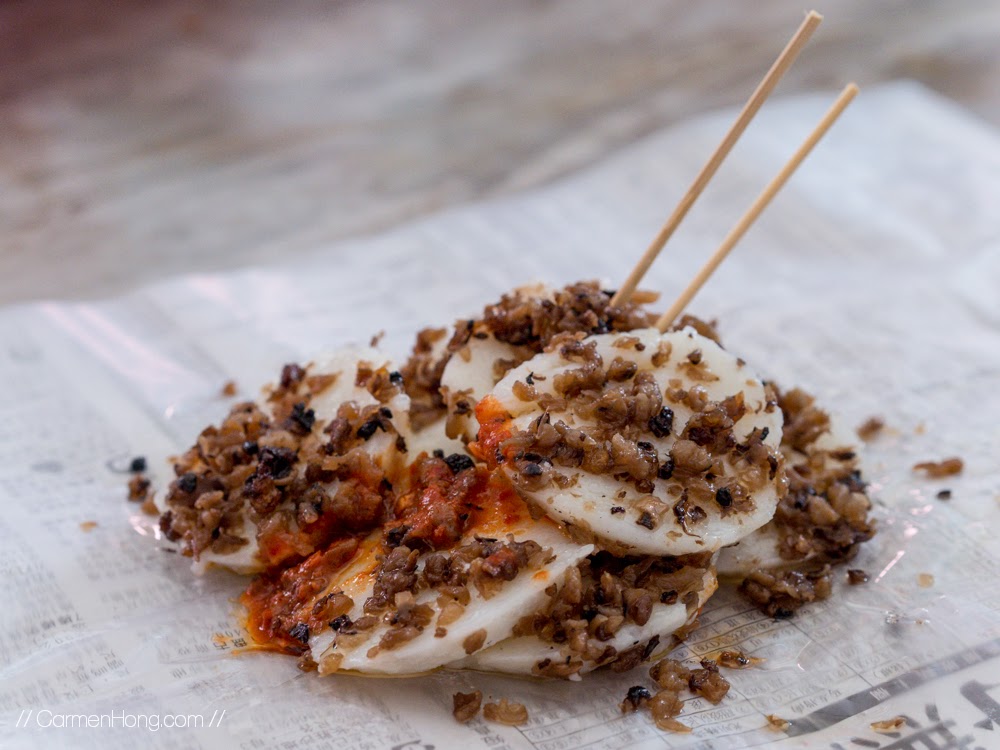 There are 8 pieces in the picture above and the uncle who sold it mentioned that he sells hundreds of them in a day. There were just so much effort to make them so tiny, I do not understand why. Actually I do. It was tastier to have them in bite sized pieces than one huge chunk. I quite like this.

After that, we left the kopitiam to do some walking around the town. It was a rather pleasant day, the wind was blowing and the sun was shining. It wasn’t the intense type, so it made walking around the little town a rather fun, easy feat. Like most old towns, there are plenty of photo opportunity everywhere. Unfortunately though, because I was there with my family, they were pretty much walking really quickly which made it so much harder to take pictures of any subjects. Here are some that I managed to, anyway. 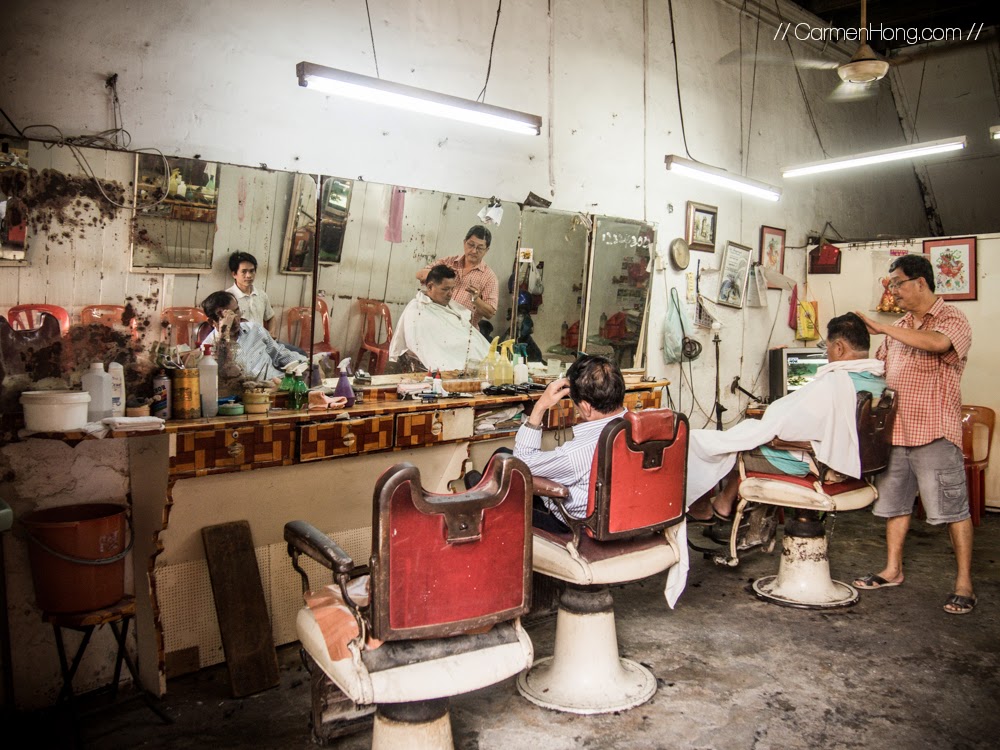 | Inside an old barber shop | 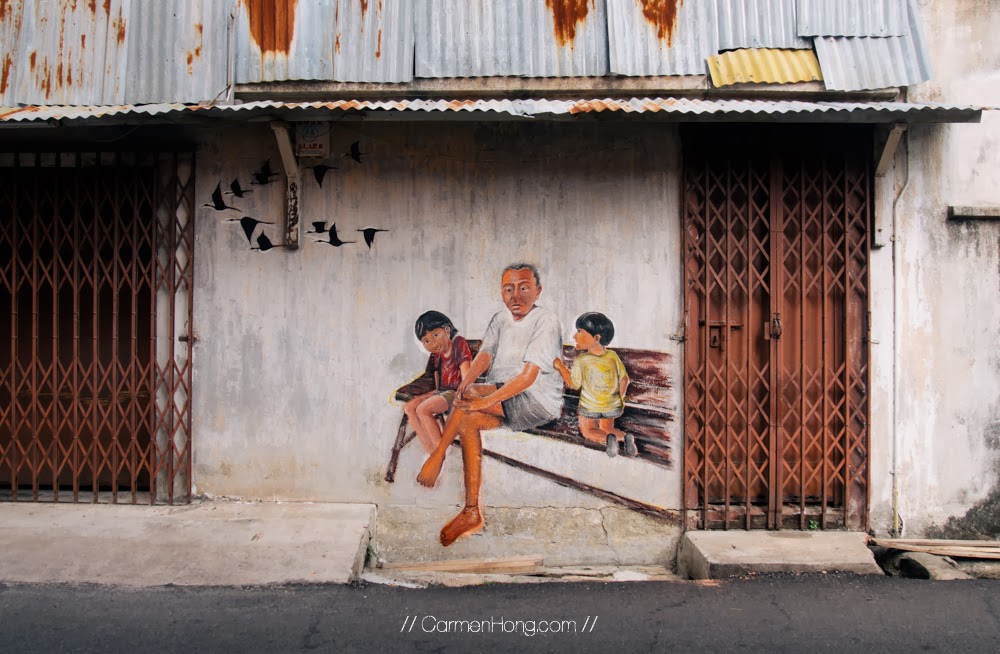 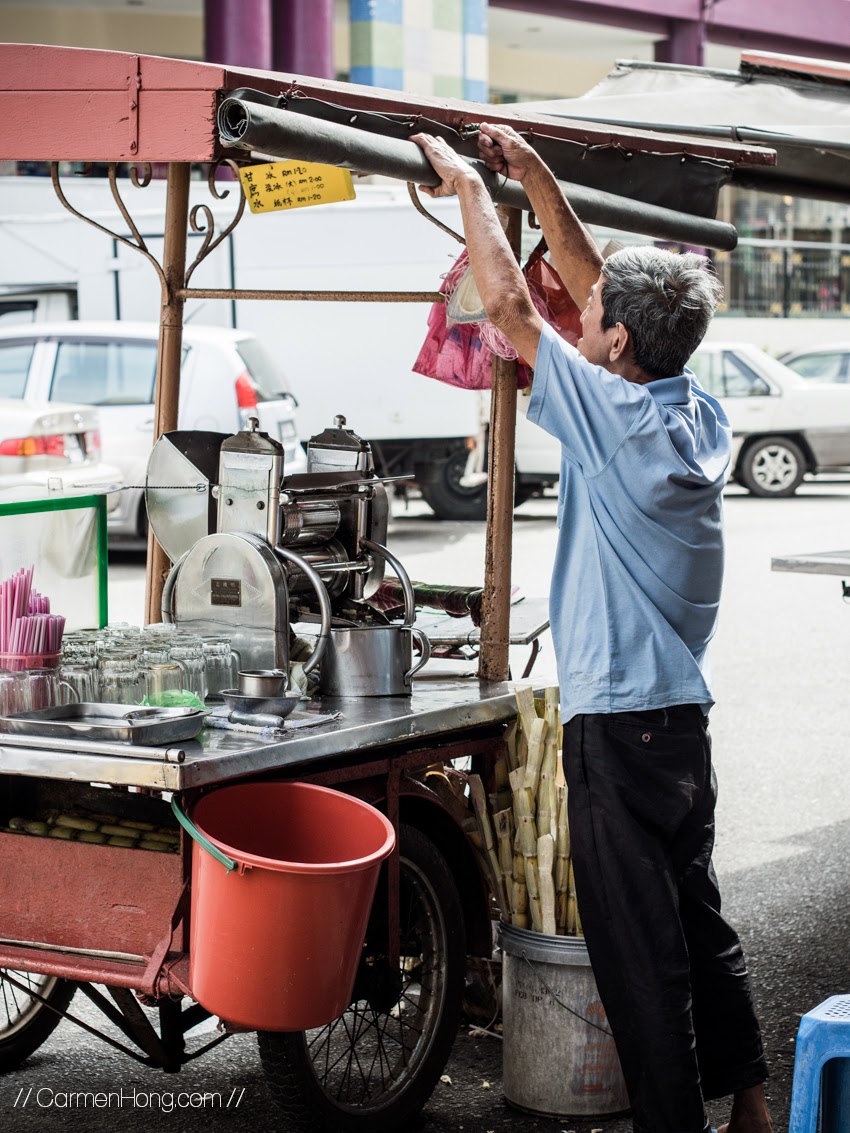 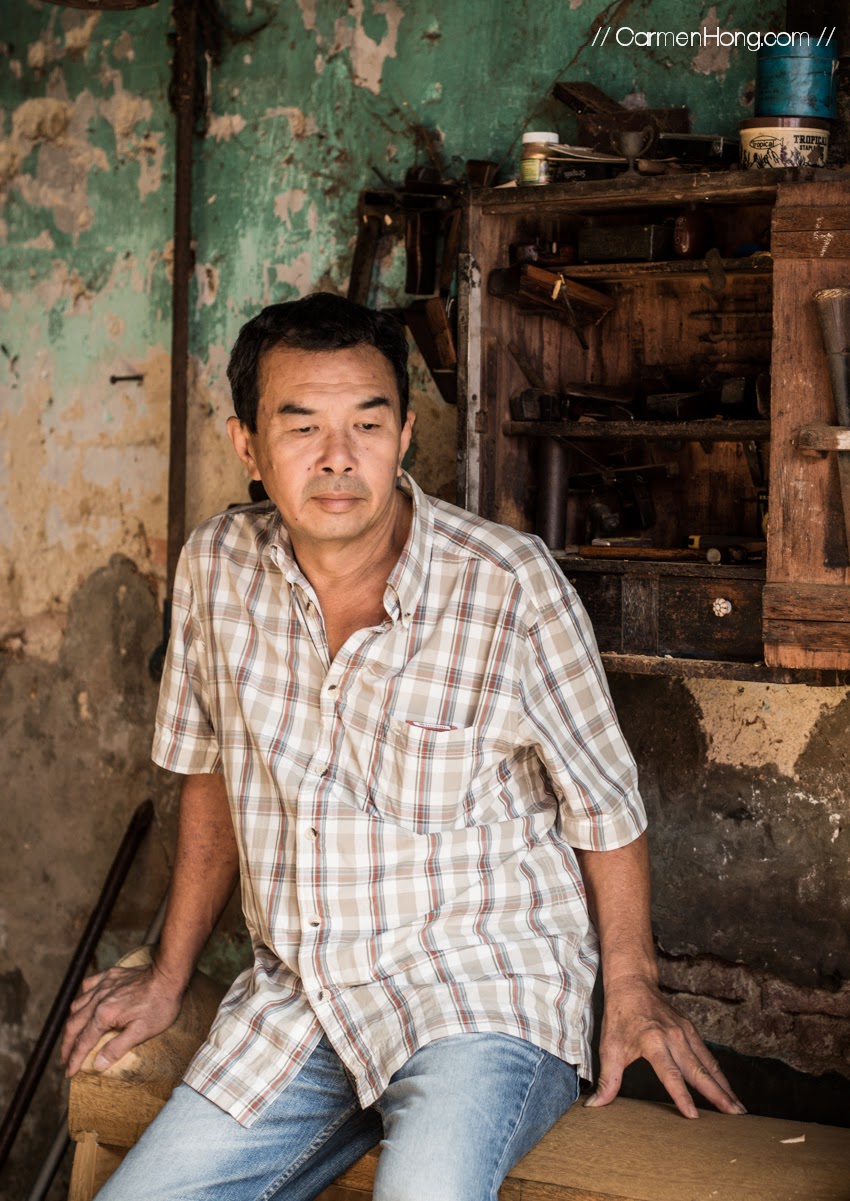 | The man who makes wooden coffins | 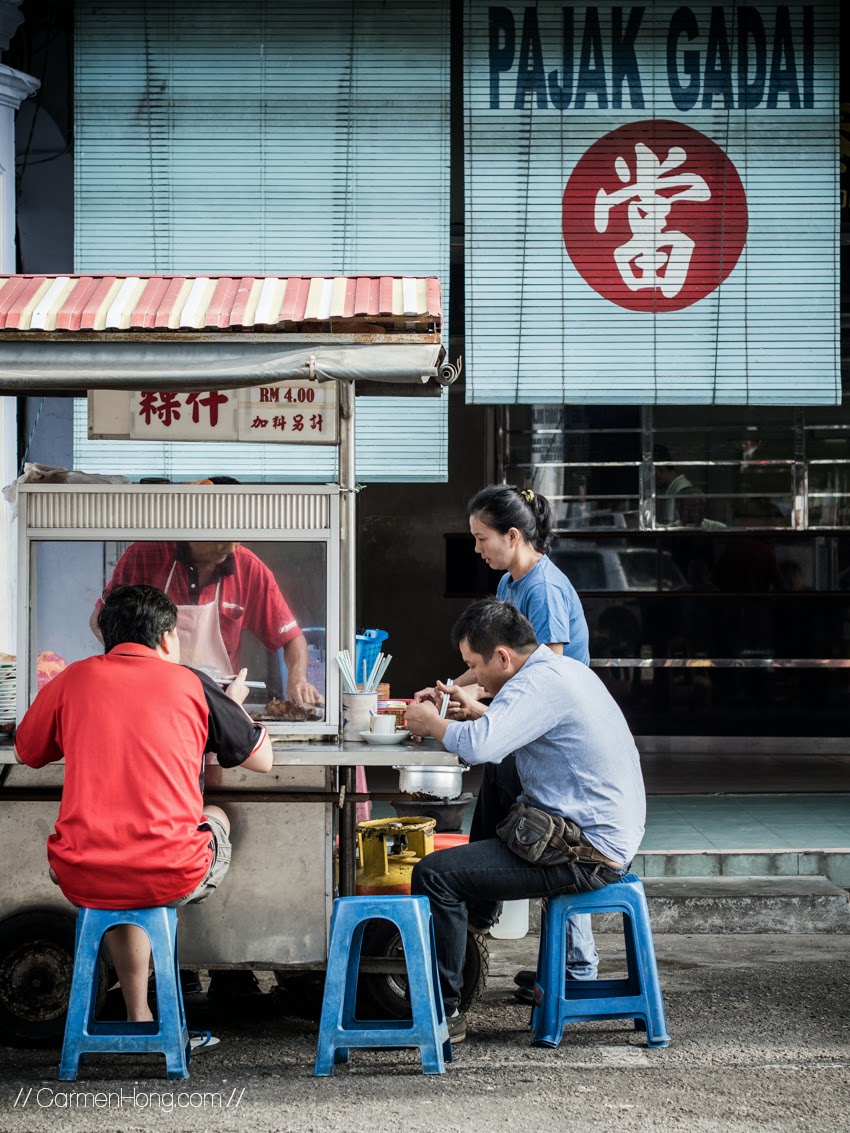 During the walk about, there were actually plenty of roadside stalls selling all kind of food. But most of them at 10am were either close or they have just started opening their stall, so there actually wasn’t a need to arrive in Muar so early. 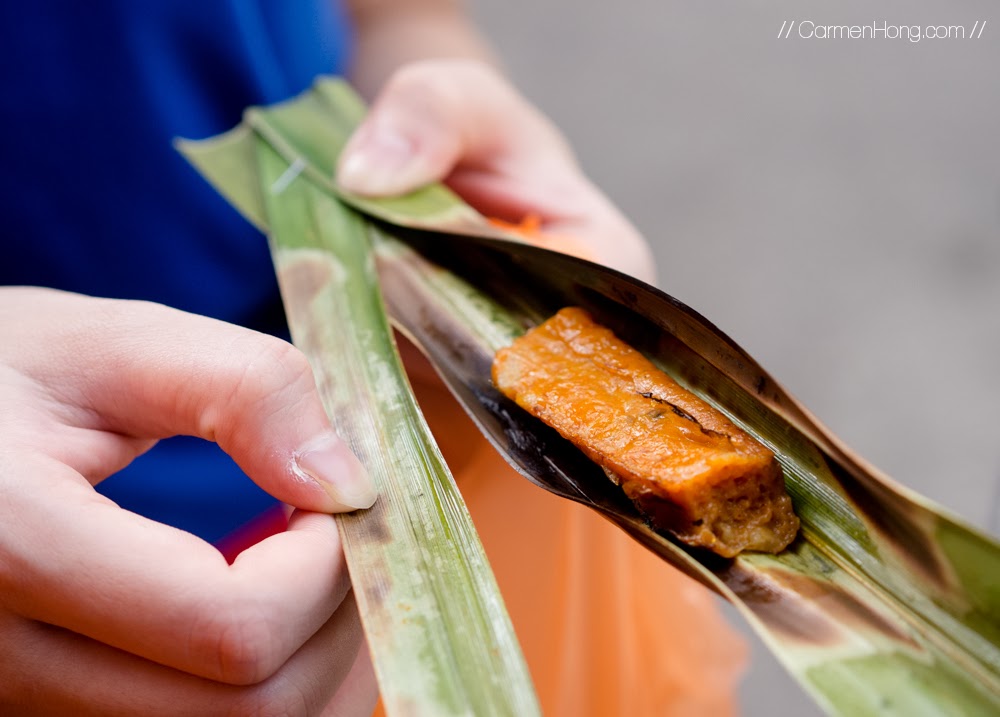 We came across many stalls selling otak-otak and I must confess that those were my favourites. I couldn’t resist one. Well, actually I had more than one. This was really good, I don’t think you can go all that much wrong with otak-otak. 🙂 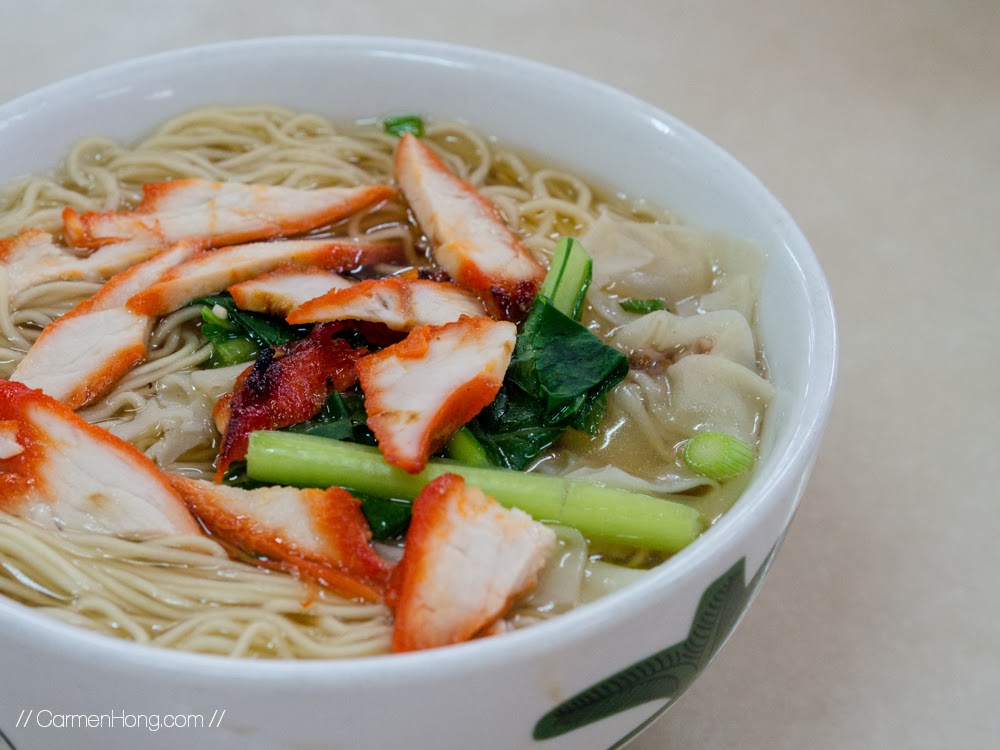 Wantan Noodles | RM3.50
After much walking around, we arrived at an acclaimed wantan noodles stall which was said to be the best in Muar. They were still setting up their stall when we arrived and we saw countless plates of wantans being placed in the fridge along with boxes load of noodles. At that point, it crossed my mind that it was so good that they sell so much in a day. And boy, was I wrong. It was the worst noodles I have ever eaten in my life. Even for RM3.50 I wouldn’t pay for it. The wantans skin was so thick, you might as well eat flour sheets. The soup was tasteless and the noodles was just bland. The char siew was meh. 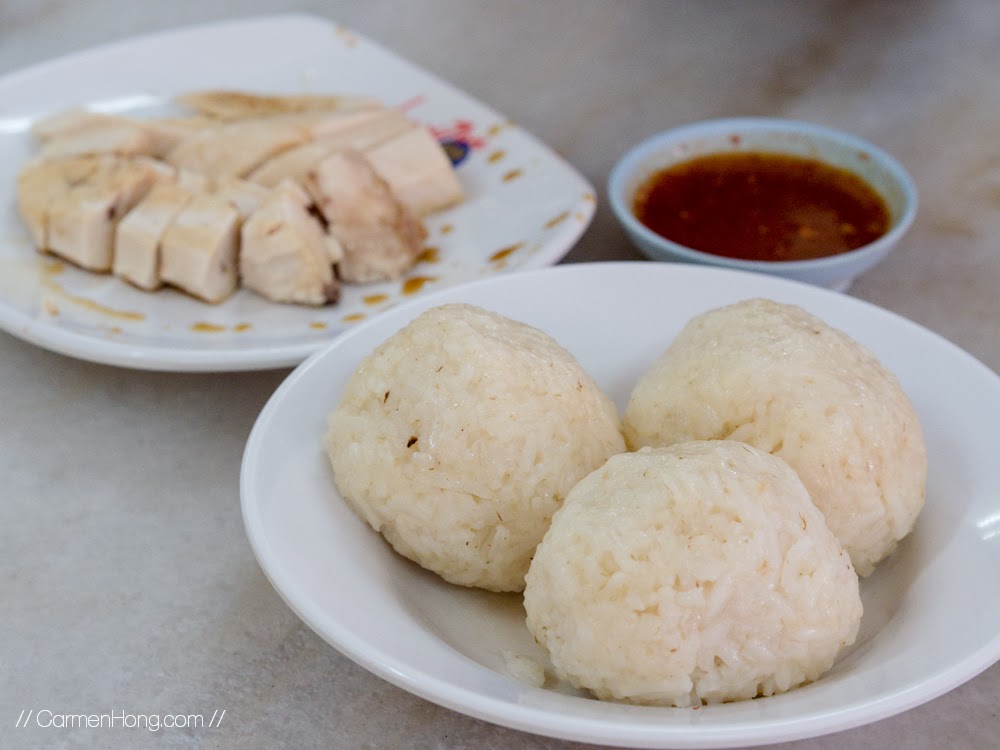 Chicken Rice Balls | Jit Fatt Restaurant
After such disappointing luck with the noodles, we decided to head off to another recommended place to have chicken rice balls. I was with my dad when he was reading the review for this place. The blogger had claimed that it was really delicious and what not. BUT GUESS WHAT HE MUST HAVE NEVER TRIED CHICKEN RICE BALLS FROM MALACCA. BECAUSE THIS WAS THE WORST CHICKEN RICE, don’t even say chicken rice ball. Even just as a plain chicken rice, it was easily one of the worse chicken rice I have ever tasted.
I was pretty much so frustrated, that I told my Dad, “Can we just leave Muar for Malacca? There are so many better food in Malacca than here.” And my dad agreed! So, we were off to Malacca then. But before that, I wanted to try so badly this lime and lemon drink from one of the roadside stalls. 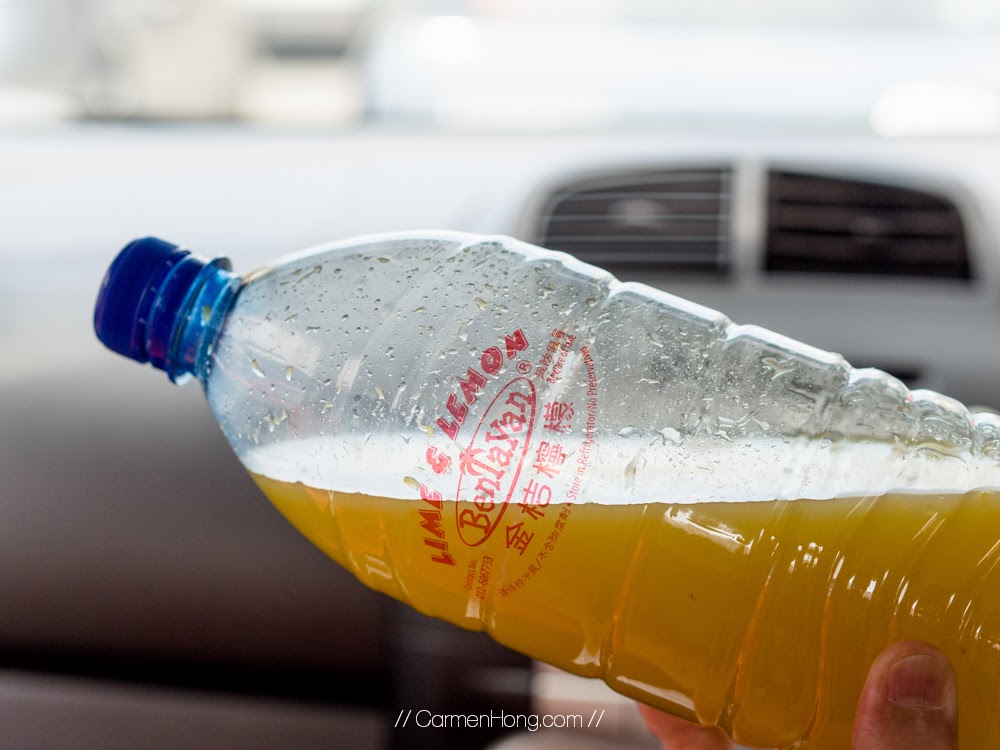 Lemon Lime Juice | RM 5.00
And damn, it was the best lime and lemon drink I have ever tasted. It was so strong, rich in the natural flavour of the lime and lemon. You can tell that this was 100% pure juice, it was one of those powerful drink you have for when you have an impending sore throat and you’ll be cured from it immediately. It was that good. So good, that we got a huge bottle of it for only RM5.00. 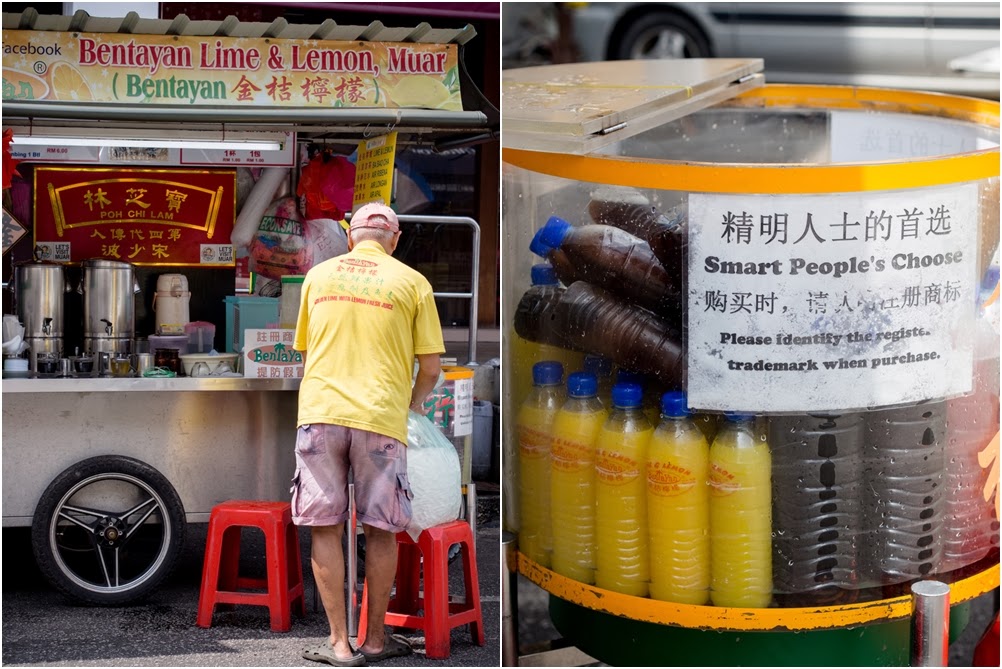 If you are ever in Muar, please just get this. This is Muar’s only saving grace, Muar is hardly a place for any gastronomic feast, I probably will never step my foot there anymore. Or I’m just having the worst luck in Muar when it comes to food, because one of my friend mentioned that food in Muar was nice. I didn’t go the same places she did, but the ones I had were disappointing.
* * * * * * * * * *
I’ll end this post now, and I will continue the Malacca part in another blog post. Do look out for the other post! 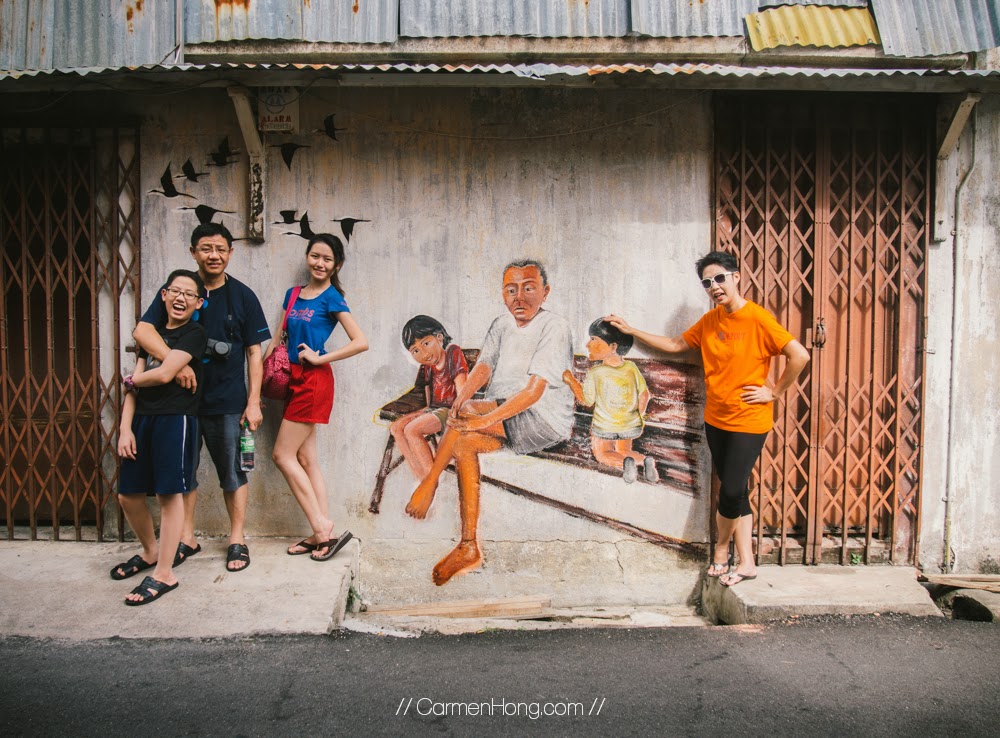