Before my visit to Antonio’s this time around, I have only visited them once last year. I have always been meaning to drop by again because I was absolutely smitten by the delicious food I had then. What I had during my first visit then, was their set lunch. It was a tuna pasta (I forgot the exact name of the dish), I don’t usually take tuna but I loved that! I honestly didn’t have much high expectation of it since it was only a set lunch. But it was good, quality food at a fraction of the usual price. That left a pretty good impression on me, and I vowed to revisit the place again.
So about one year later, I was back at the restaurant along with my favourite ladies for our Valentine’s Day dinner date. I had initially planned to head to a cafe for dinner, but a day before the dinner, the cafe called me to inform me that they would only be serving Valentine’s Day set dinner starting at RM79.90 for 3 course meal, with the main being some roasted chicken. Truth to be told, it was over priced for a cafe and I decided to head elsewhere. Lucky thing, I managed to make last minute reservations at Antonio’s just 24 hours before the actual dinner. I didn’t appreciate being told so last minute by the cafe, but I still respect that they did have the courtesy to at least inform me after all.
Anyway, back to Antonio’s. Before I go on further, photographing food in the restaurant was pretty difficult because it was dimly lit. The restaurant has a very cosy and comfortable ambiance, with no direct lighting at all. So, for me that was just a nightmare. I initially planned to shoot with flash, but I am a noob at it and the ceilings were pink in colour, so bouncing light of it is a no-no. I am left with either flashlights from phone or just shooting wide open, f/1.8. I personally didn’t want to use those pictures but I really did wanted to post about this place, so here it goes. 🙂
* * * * * * * * * * 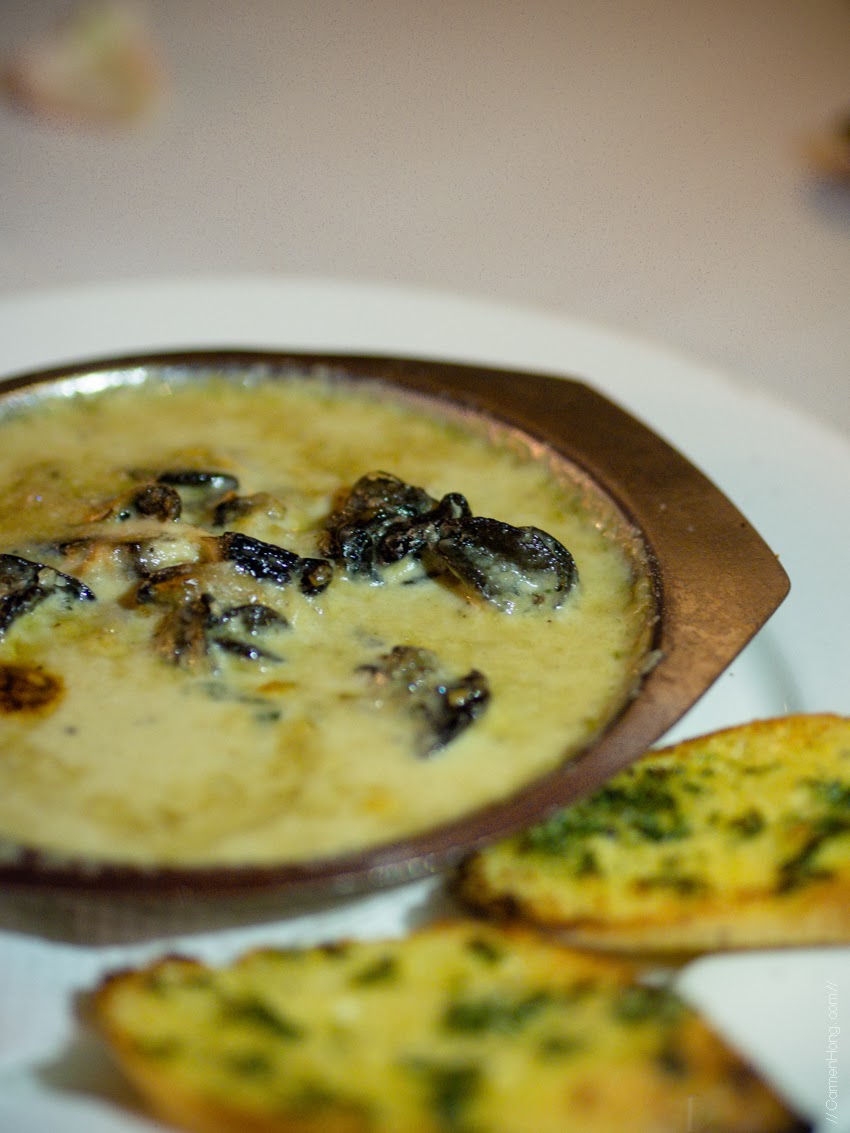 Escargots | RM22.00
I have an extremely weak spot for escargots, every time I see them on the menu… I’m most likely to order that. Pictured above is half a dozen of shelled escargots drowned in a creamy mushroom sauce and baked with parmesan cheese. This is heaven on earth, there were chunks of mushrooms in the sauce too. As perfect as it is, I wished larger escargots were used and perhaps, should be served with the shells (but still peeled, nevertheless). Without the shells, this dish looks ridiculously tiny and almost isn’t worth it. But luckily, the taste made up for it. My friend and I polished everything from the bowl. It is that good. You can also opt for a different cooking method; sautéed in olive oil but I am sure, the sauce would taste better. 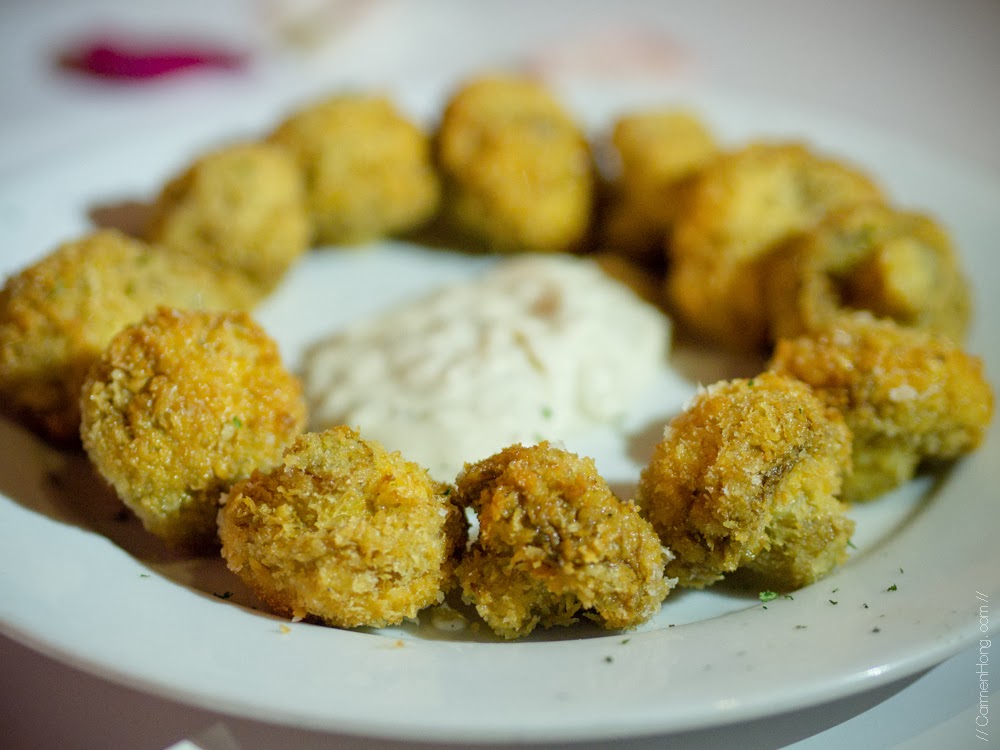 Breaded Mushroom | RM22.00
I wasn’t quite listening to my friends when they placed the order so when this came I was a little surprise. I didn’t know what it was, I took a bite of it and mhmm, it was juicy mushroom but fried with breadcrumbs and it was bit crispy on the outside. The texture for this dish was really different, it was soft and juicy inside, and outside, there were rough crumbs. Now try to imagine that. 🙂 Having said that, this was a dish too simple for me. I would have rather order Baked Mussels for RM23.00 instead. Well, there’s next time. And I’ll try to cook something like this at home and see if I can. 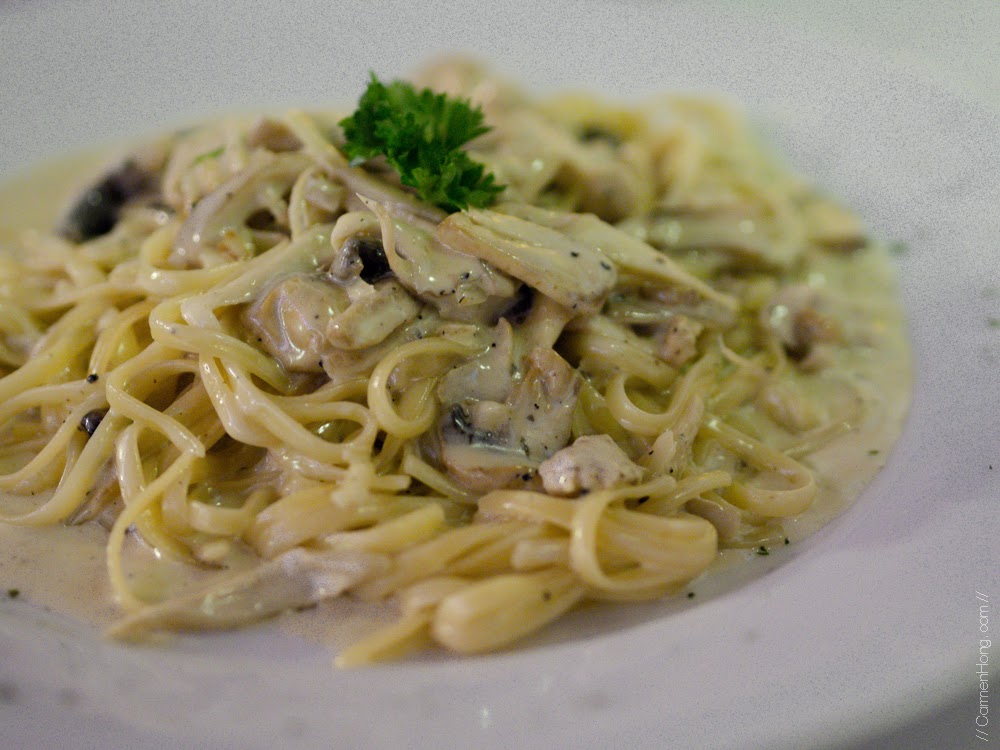 Carbonara | RM30.00
Two of my girlfriends decided on this, and personally, I would have too. But then again, I never really ate carbonara outside since my mom cooks them pretty mean, so my usual pasta choice is usually seafood when I’m having Italians. I had a quick bite of this, and it was the yummy creamy goodness that would rocket any cheese lovers to the moon. This was loaded with cream and parmesan cheese, but it wasn’t too thick for me. Although you may beg to differ if you do try to finish the whole plate, serving size was pretty huge and it is perfect for sharing. There is an option to have beef bacon or just chicken (as pictured above). 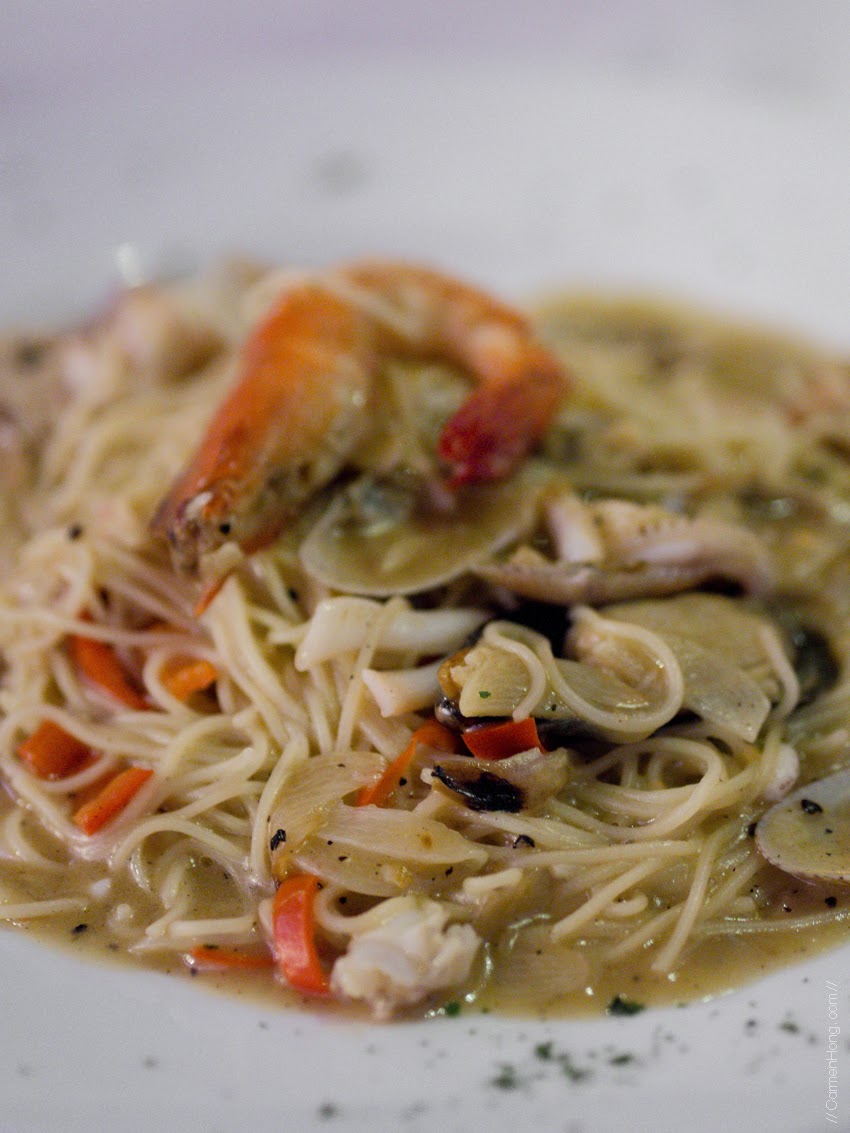 
Please excuse me for my picture, but this was one of the better ones of all. It was a bit more difficult to compose this shot, because of the presentation of the dish. Personally, it was really messy to start out with, and it does feel as though the chef tossed everything together and he just wanted to get done and over with this dish. When I ordered this, I had no idea what the name meant, I had a feeling I would like it based on the description.
This had prawns (two to be exact), squid (tiny bits here and there), mussels (two also) and clams (plenty of shells, with not much clams’ meat), cooked in garlic and seafood sauce. My choice of pasta was angel hair, thanks to the waiter’s recommendation. I absolutely loved the taste of this, this was completely unique to me and it was just delish. There were plenty of garlic and the sauce, went really well with the whole dish. However, what I thought was a waste was the quality of seafood used in this. I can tell that they weren’t fresh and there were pretty small in size, unfortunately. Another thing was that, as I was finishing the dish, I could feel tiny residue of something that leaves a sandy feeling when you eat it. It could be sand from the clams (if it wasn’t properly cleaned or it could be bits of clams’ shell). I still enjoyed this, but it could have been much better.
The last time I was at Porta Romano with two of my friends, who were also here today, they preferred to order something more authentic Italian, staying away from the usual of spaghetti and pizza. We had salmon ravioli then and this time around, both the girls picked Ravioli – RM28.00 and Cannelloni di Pollo. I didn’t manage to get a decent picture of the Ravioli, so the picture of the Cannelloni di Pollo will do. The girls loved their ravioli, which was a vegetarian dish of pasta parcels stuffed with spinach and ricotta cheese, served in cream sauce. There’s an option for tomato and herb sauce too. The serving size though was little smaller, there were only like less than 5 parcels. 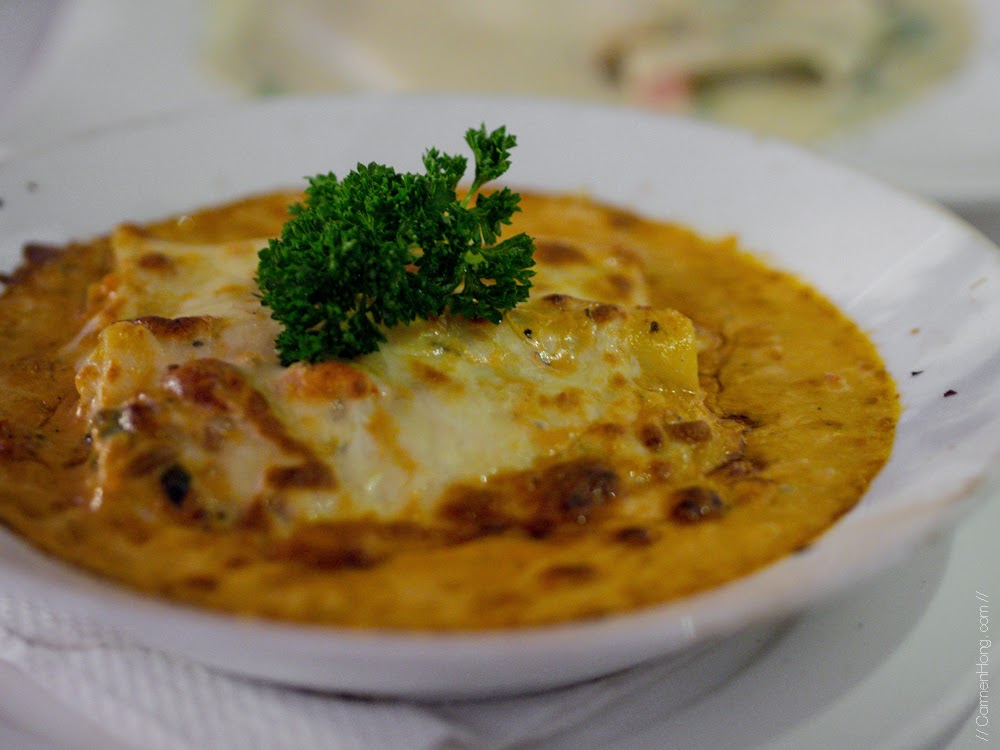 Cannelloni di Pollo | RM27.00
As for the cannelloni, I had no clue that they were actually stuffed pasta tubes. When the dish arrived, I thought it resembled the lasagne a lot since it is also baked in a creamy tomato sauce with mozzarella cheese. I did give this a try and it was pretty tasty, because the tubes were stuffed with chicken and spinach. When I took a bite of it, as yummy as it was I felt that the stuffing was tad dry. It’s probably best to eat it with a spoonful of the tomato sauce too, so that it’ll be less dry. The serving size for this was pretty decent, can be shared between two persons. 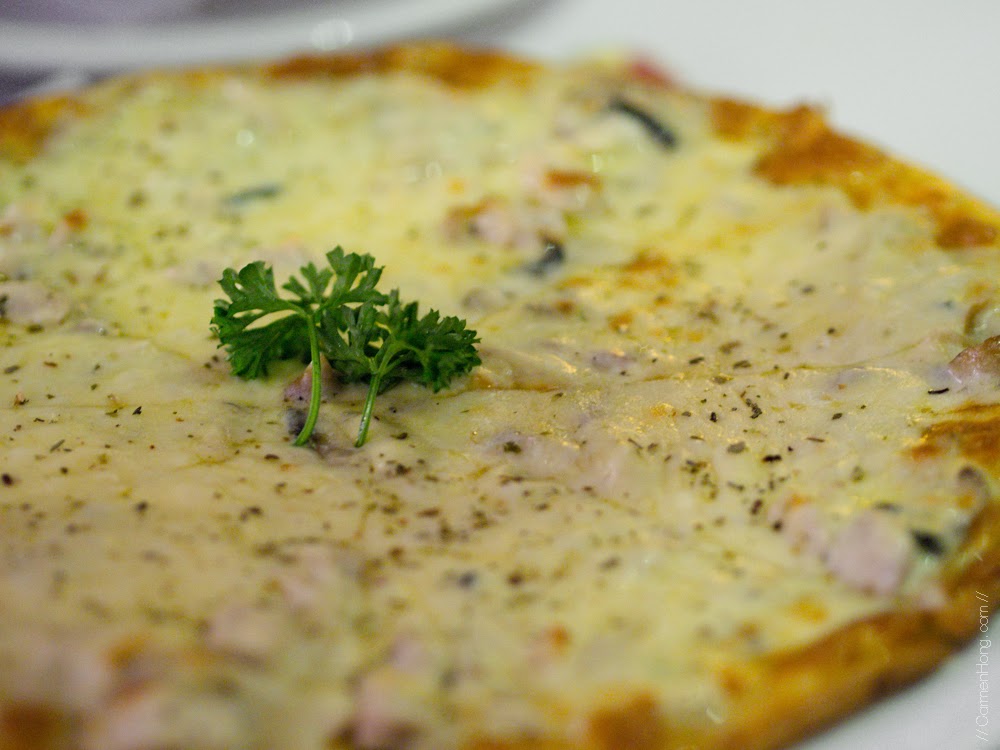 Bianco | RM31.00
One of my friends was feeling really adventurous and she wanted to try the pizza, so she ordered the Bianco flavour. It had sautéed chicken breast and mushrooms in creamy white sauce topped with mozzarella cheese. The cheese though as you can see from this picture is pretty much overflowing and if you love cheese, you will absolutely love this. I love cheese and I liked this, but I would still pick Domino’s any other day. I’m sorry, but actually not so sorry for my choice. The pizza is a thin crust with 8 slices, definitely made for sharing. My friend ended up eating two slice only, I ate half of a slice and another friend ate another piece. She ended up packing the rest of the pizza. Haha.
* * * * * * * * * *
And that’s all we had for the night. Since it was Valentine’s Day, the serving time took a longer time than the usual and I had a feeling that some of the dishes were cooked in a rush. I said so because the chefs has got the taste right, but very much lacking the oomph and yes, I am rather forgiving this time around. In fact, I would very much like to drop by again to see if what I thought was right. The price of the food was fairly reasonable; we ended up paying RM50 each per person including a drink we each ordered. We didn’t have any alcoholic drinks, btw.
// Antonio’s Trattoria Calabria //
32A Jalan Wan Kadir 4, Taman Tun Dr. Ismail, 60000 Kuala Lumpur, Malaysia
03-7725 4164
Open daily from 10.30am till 3pm and 6pm till 11pm
* * * * * * * * * *
PS – It is located in the shop lots opposite TTDI Plaza. If you use Waze, you’ll be able to locate this restaurant. Parking is aplenty here, and you can enter the restaurant from the front entrance (facing the main road) and the back entrance (facing TTDI Plaza).
Share

Snaps: CNY Dinner at The…