Another one of my favourite places to head to for good food would be Taman Tun Dr Ismail. In this year alone, so many new cafes opened in the TTDI neighbourhood; I’m thinking it would be the next Bangsar (in the sense of that, it’s like a food-concentrated area). If you ask me, some of my favourite places are around that area. And I have another to add to my list now.
If you read my reviews often, you’ll know that I almost never say that. To add a restaurant to my list, would mean that I do love the place so much that I would revisit and most likely recommend it to my friends. The place that I’m talking about is none other than Dukes & Duchess, which is a place that I first know of as a bar. That was mainly because I was there a year back for a couple of drinks with my friends. I never did stepped foot back in there until last week, thanks to a food review session organised by HungryGoWhere Malaysia.
Much to my surprise, they now have a complete and extensive food menu on top of their drinks menu. The bar and grill place now serves real, solid food which are not just your average pub/bar grub. This is all thanks to chef Don Daniel Theseira, who now helms the kitchen of Dukes & Duchess. Let’s begin with food that we had that night, shall we? 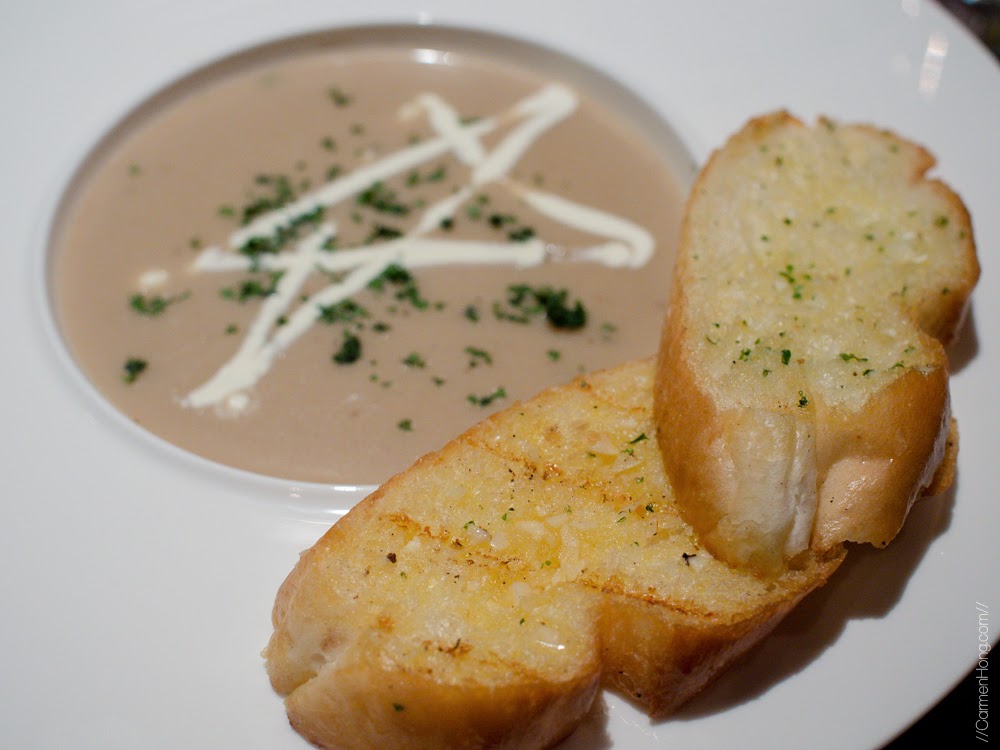 Roasted Mushroom Soup | RM15
The soup arrived looking rather photogenic, and pretty much artsy I would say. Haha, so jokes aside, I found that the mushroom soup has a somewhat peculiar sour-ish note to it which I was unable to identify. Needless to say, I didn’t quite enjoy this. Serving size is pretty huge, by the way and the garlic bread was crisply delicious I would say. 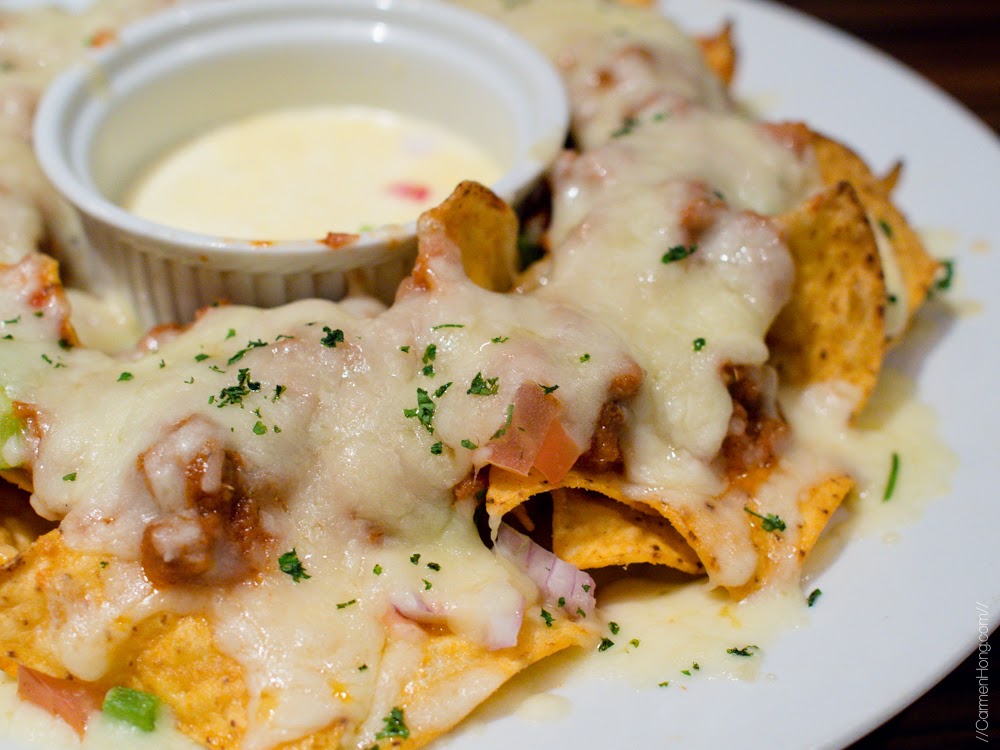 Nachos Chilli Con Carne | RM28
I have never been an appetizers-type of person, I would always find myself heading straight for the main course and I never quite fallen in love with appetizers. But this time around, I have and it was with the Nachos Chilli Con Carne, which has crispy in-house made nachos drenched in Chef’s Don homemade chilli con carne, topped with melted cheese & jalapenos. This was the most amazing things I have eaten to date, I might have sounded a bit exaggerating but the nachos were crispy thin, coupled with the cheese and the beef sauce.. OH SO AMAZING. 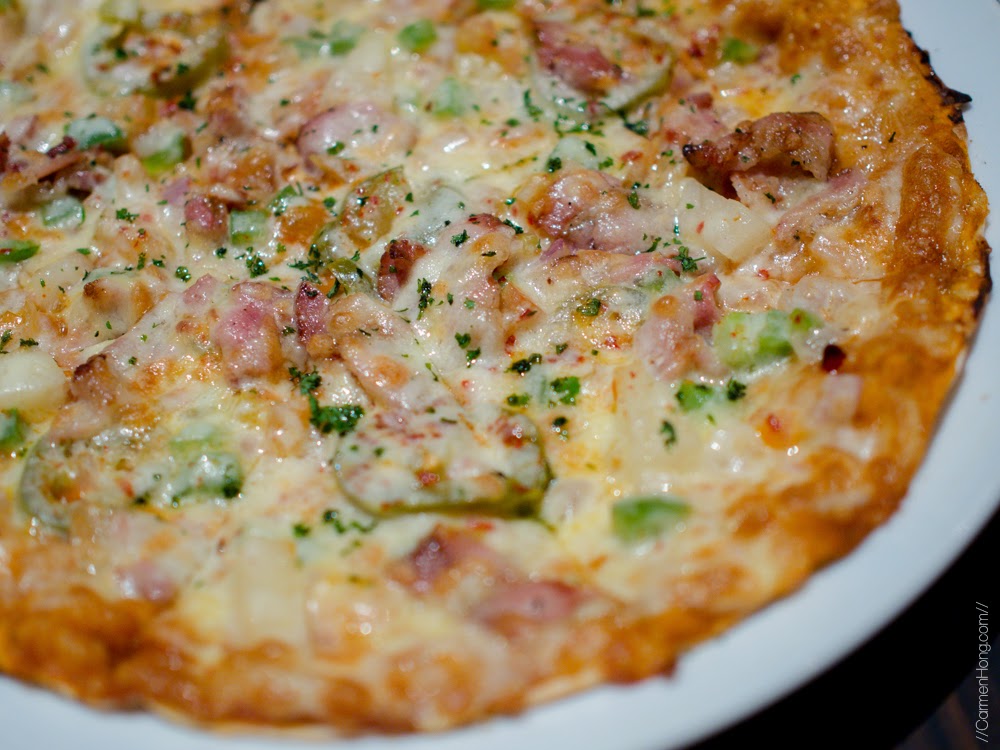 Spicy Bacon Pizza | RM28
Next up, we had the Spicy Bacon Pizza, a thin crispy thin crust pizza with tomato sauce base and topped with spicy pork bacon, capsicum, olives and cheese. This pizza has bacon with a generous amount of cheese on it. With that combination in hand, the pizza was nothing short of delicious! Didn’t quite taste the spicy bit tho, or my tolerance is much higher than I expected. 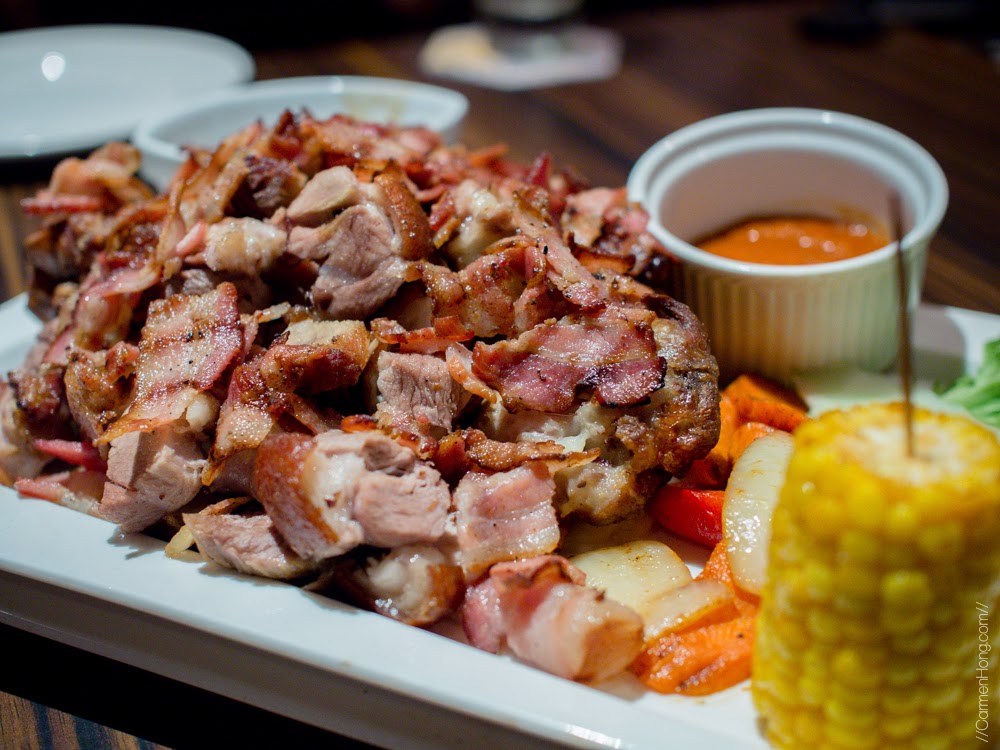 Crispy Pork Knuckle | RM 88
The Crispy Pork Knuckle is another one of the glorious looking dish, a pork knuckle buried under piles of grilled bacon, served alongside with roasted vegetables and corn-on-cob. Taste-wise, however I was rather disappointed because it tasted rather bland and the skin wasn’t all that crispy (it was chewy more, which was a turn off for me). However, the special home made chilli garlic sauce by Chef Don which accompanied the Crispy Pork Knuckle was the saving grace for the dish, as the chilli sauce was rather unique. It was also pretty appetizing when paired together with the pork. 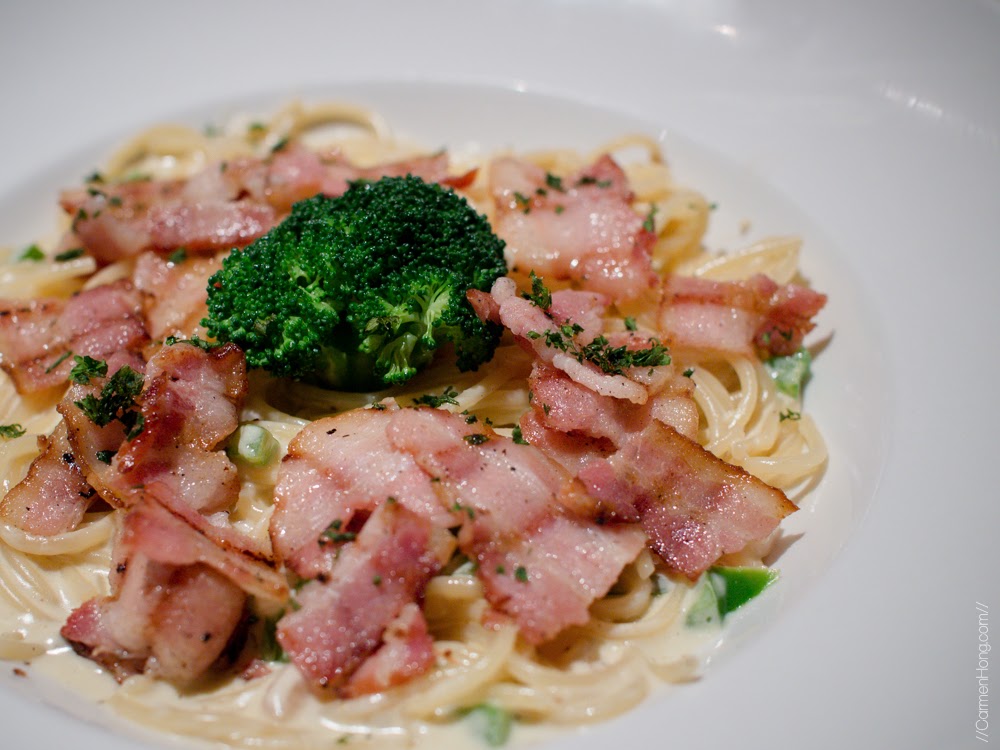 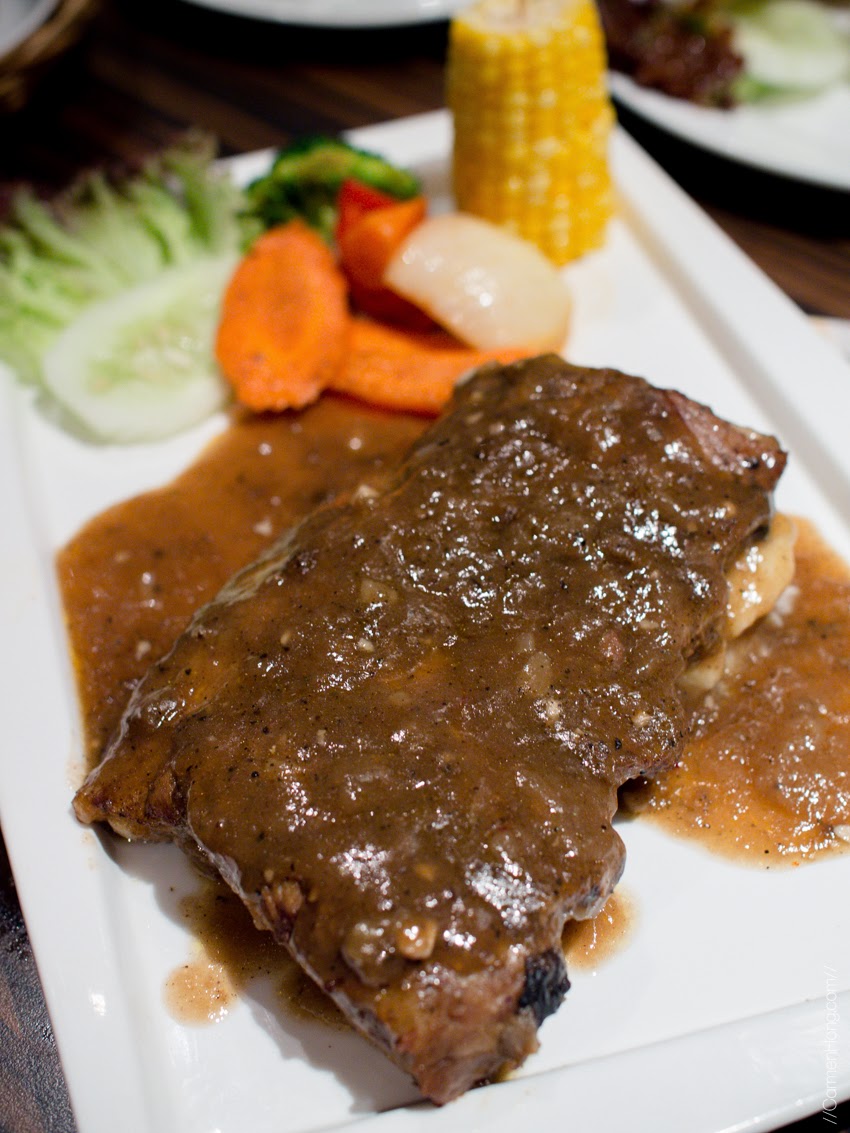 Australian Sticky Pork Ribs | RM 42 (Half Slab)
And those were some of the Western dishes that we have sampled, which was (aside from the nachos) are pretty common dishes that you would find in most Western food joints. Now, comes the interesting bit because on top of the Western dishes Dukes & Duchess also serves local dishes and they served pretty “mean” ones I would say. It was the last thing I was expected when I saw the local dishes, that it would be an average one. Except it turned out to be completely the opposite. 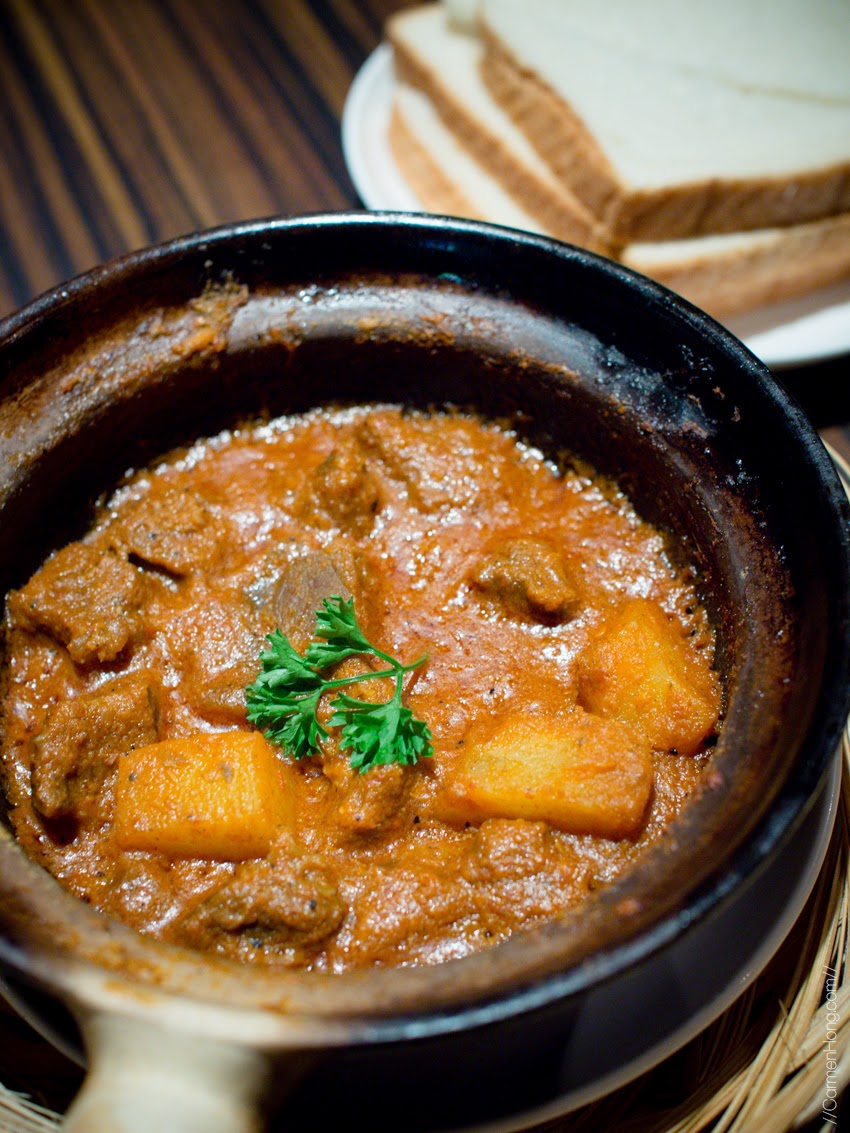 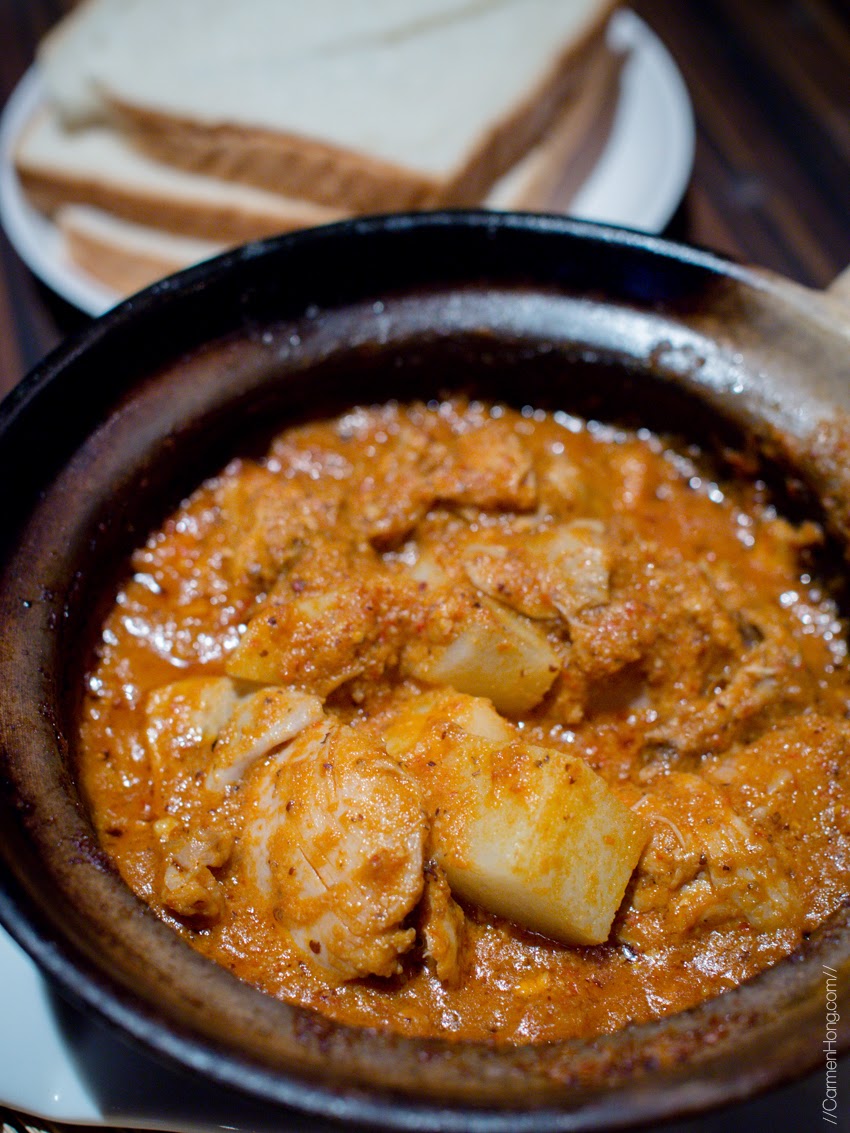 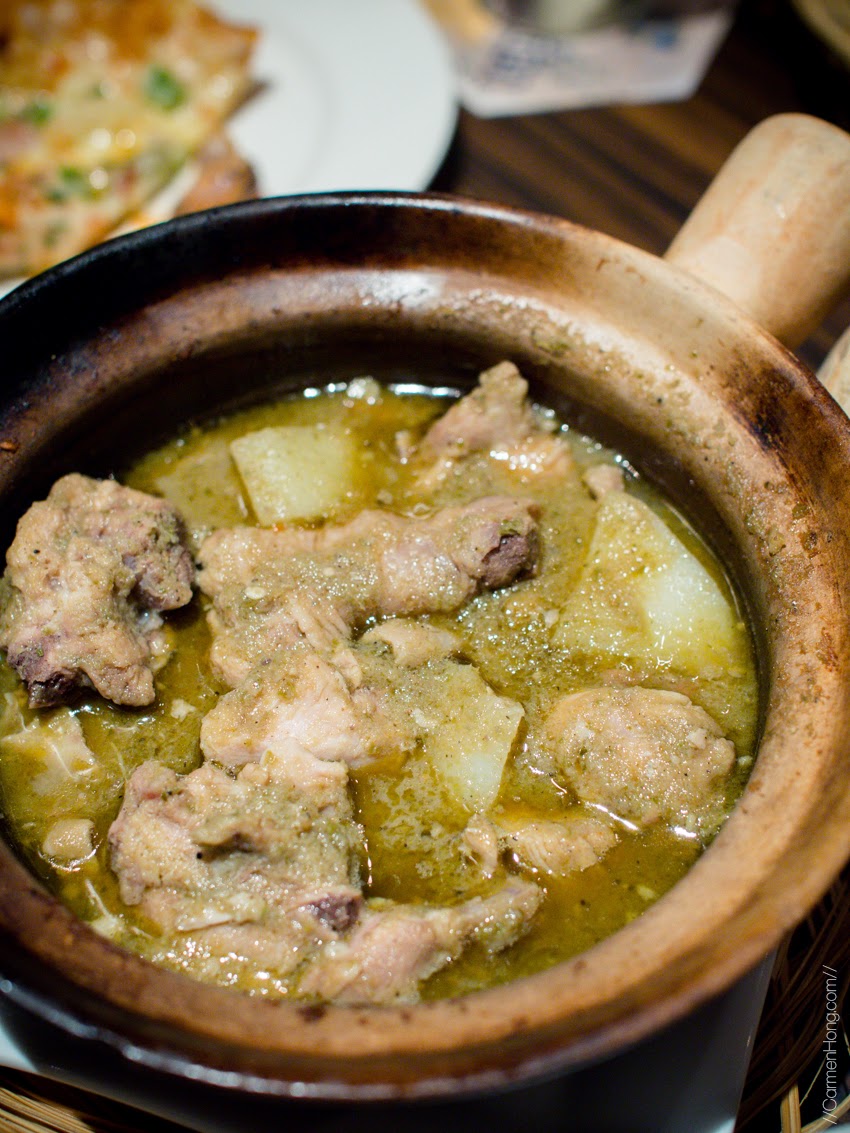 Chilli Padi Chicken | RM16
The mutton curries that I have had are usually rather overwhelmed with the rich curry flavour, which to some can be a warm welcome. I, myself like mine with just the right amount of curry taste to it and the Mutton Dry Curry here, had the perfect balance between curry and the intensity of the flavour. Then, there is the Devil’s Curry, which is an already famous dish on its own. Known for its super spicy, mind-blowing curry… the Devil’s Curry is usually not for the faint hearted. But in Dukes & Duchess, the one served here is a milder version which for me was already rather spicy. The spiciness, was rather addictive though and you’ll end up finishing the whole dish, then crave for more.
The best of the three, I would say would be *hands down* the chef’s own recipe of the Chilli Padi Chicken dish. As dauntingly spicy as the dish appears to sound, it is actually rather decent (in terms of level of spiciness). What I found to be more amusing for the generous usage of herbs which worked really well with the chillies and resulted in a rather delicious chicken dish. All the dishes above are served with a choice of bread or a plate white rice which comes with keropok and mango pickle. 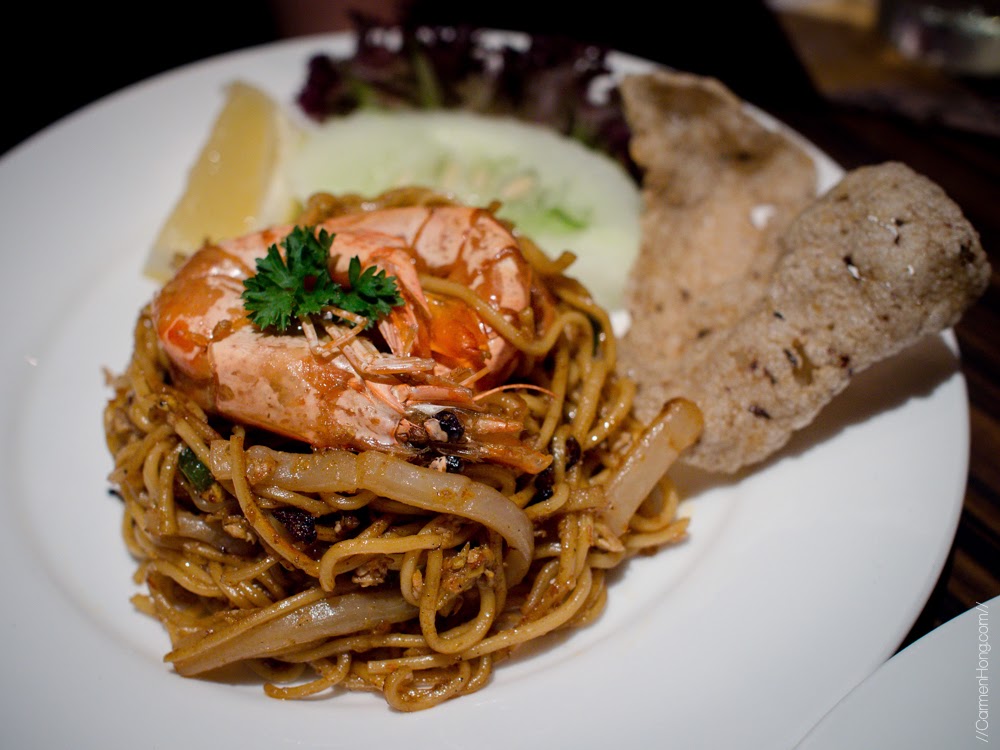 Malaccan Portuguese Spicy Noodles | RM 14
We ended our feast that night with just the Chef’s specialty dessert, the Molten Lava Cake. Each of the lava cakes sold were made by the chef himself, and only himself, so it’s awesome-ness is pretty much guaranteed. Haha. I have to say, from a person who dislikes chocolate, I loved this cake to bits. The cake was not too sweet and the chocolate was rich, but not in the overwhelming-let-me-stick-on-your-throat type. And that’s what I loved about this, and it’s one of the exceptions to my I-do-not-eat-chocolate-but-I-eat-this. Best to eat this while it’s hot because then, the chocolate sauce will flow as you dig into the cake. 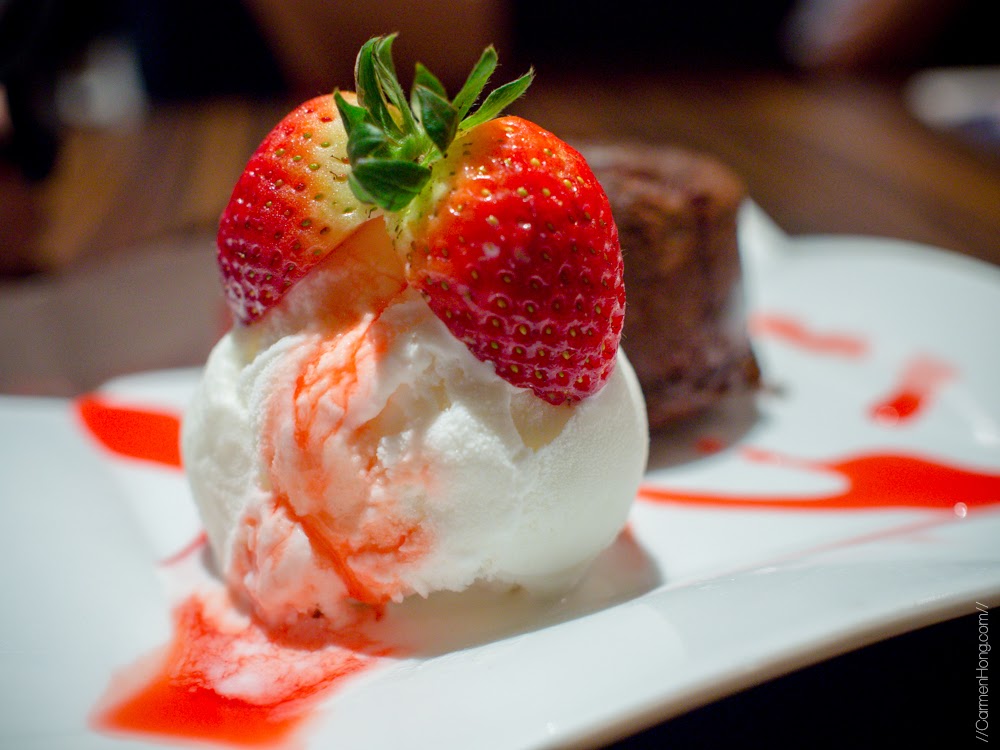 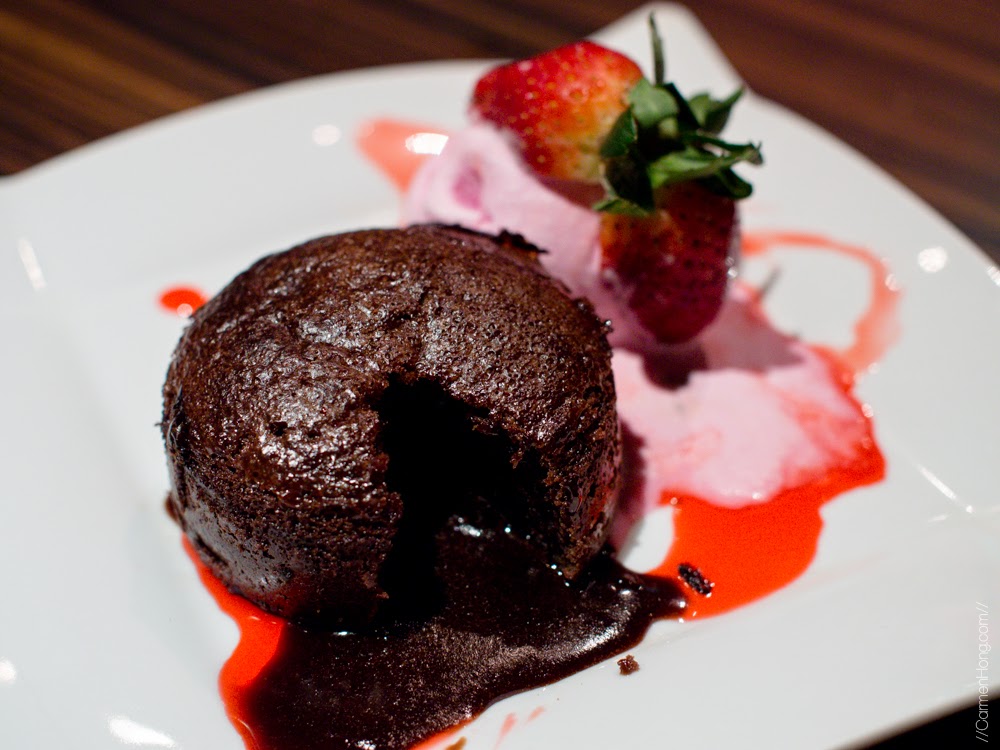