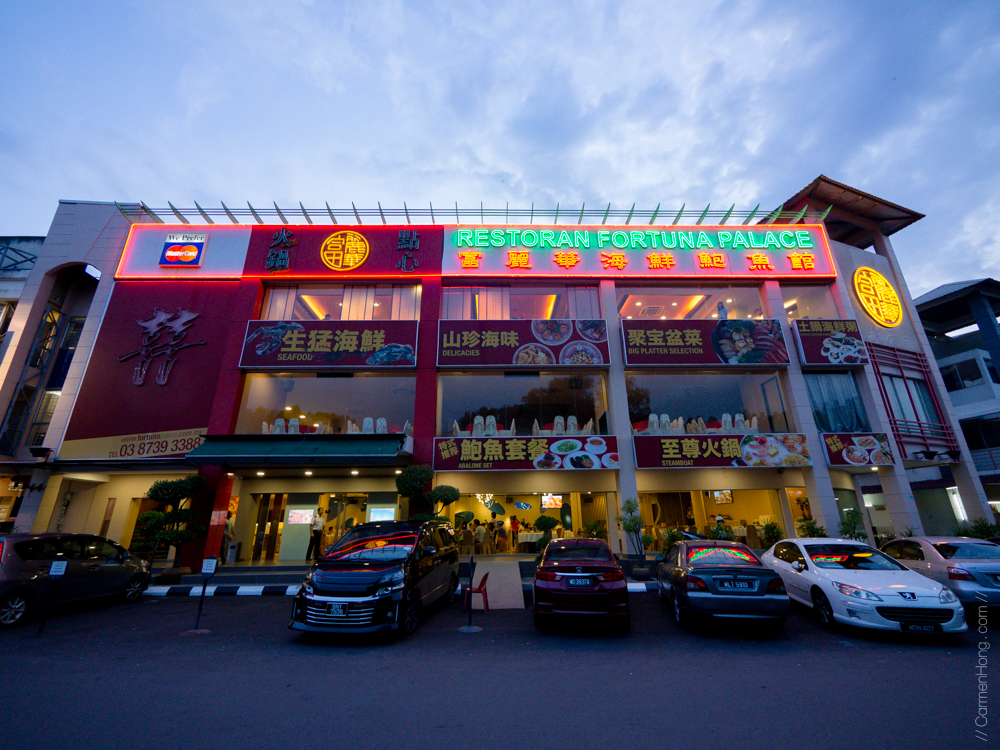 When it comes to food, the distance travelled to get there is negligible when the food is deliciously amazing. This time around, my gastronomic adventure brought me to the quaint Kajang town. Located along a row of shops, stood a grand restaurant called Fortuna Palace and true to its name it feels like a palace of three storeys high.

The first floor is for the usual walk-in dining customers, the second floor is the banquet hall where wedding dinners can be held at and the highest floor are filled with private rooms for customers who would like a private dining session. There are no charge for using these rooms but there is a minimum spending of RM450.

As its name suggest Fortuna Palace Seafood Restaurant, specialised in serving seafood dishes of many different varieties of cooking styles. I had the privilege to sample a 9-course dinner meal, which includes a couple of new dishes introduced  by the Head Chef. We started the meal with Fried Prawns with Potato Shreds and Salad Sauce. 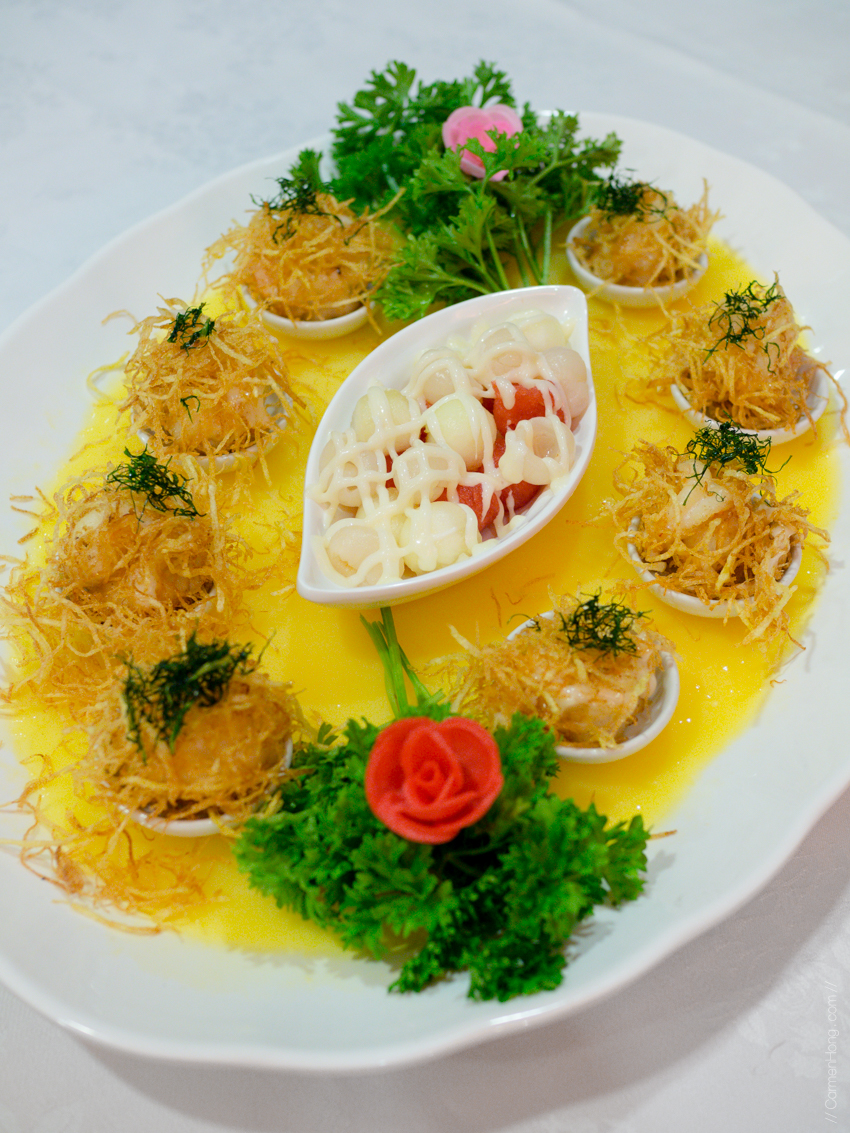 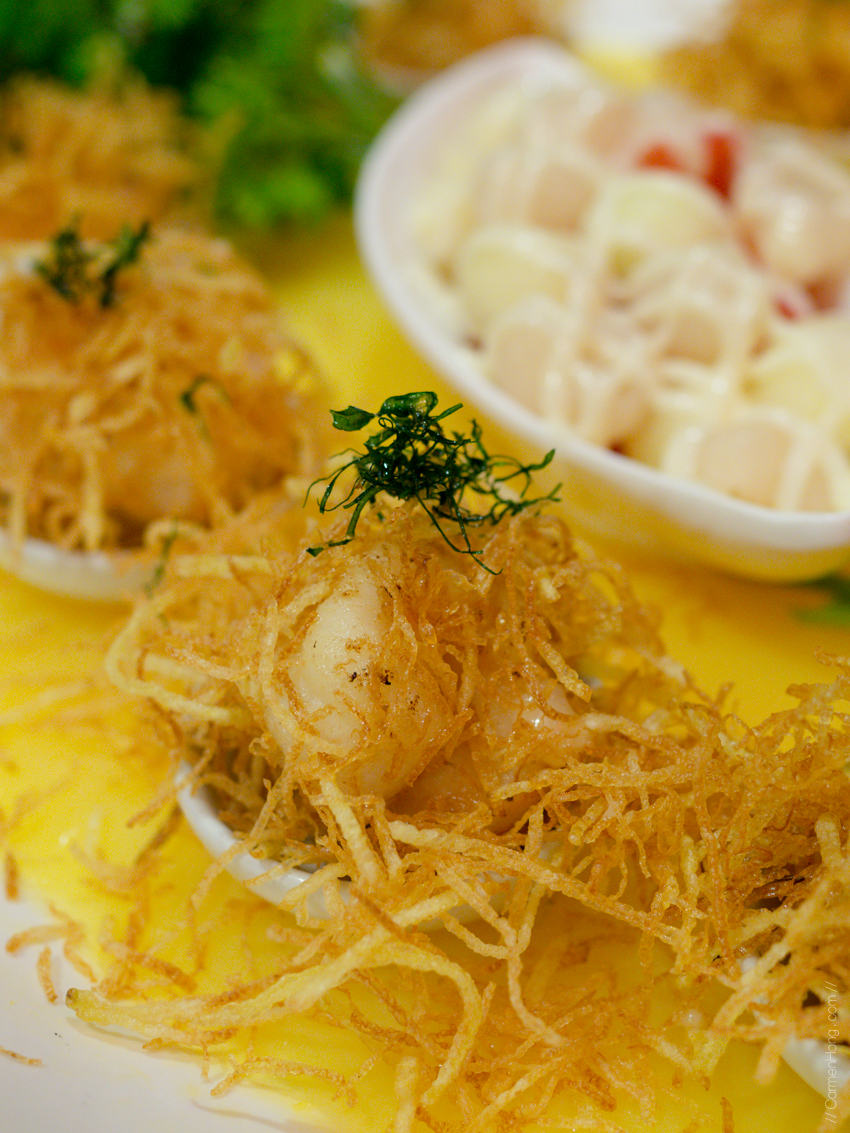 Fried Prawns with Potato Shreds and Salad Sauce | RM80
This gorgeous looking dish is made up of fried crispy battered tiger prawns topped with fine shredded potatoes, served with fruits salad of lychee, watermelon and honeydew. Do you also see a yellow layer in the dish? That is actually the mango jelly, which is edible! It’s a very interesting way to present the food, creative too! 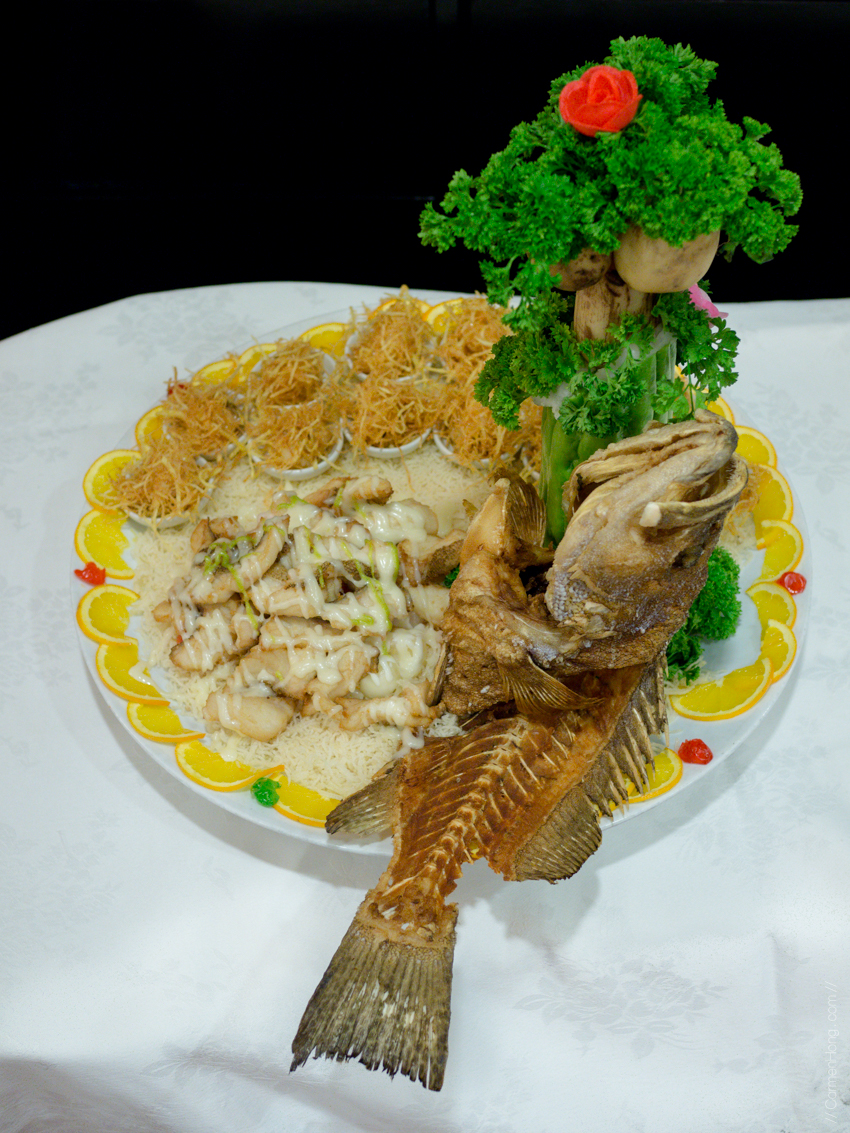 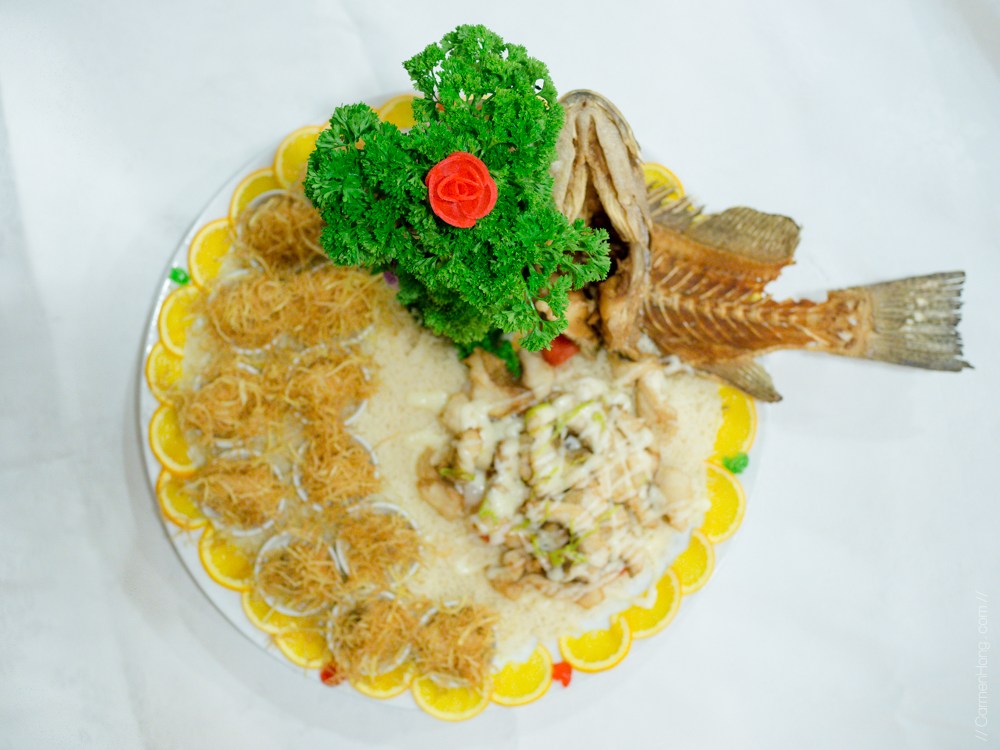 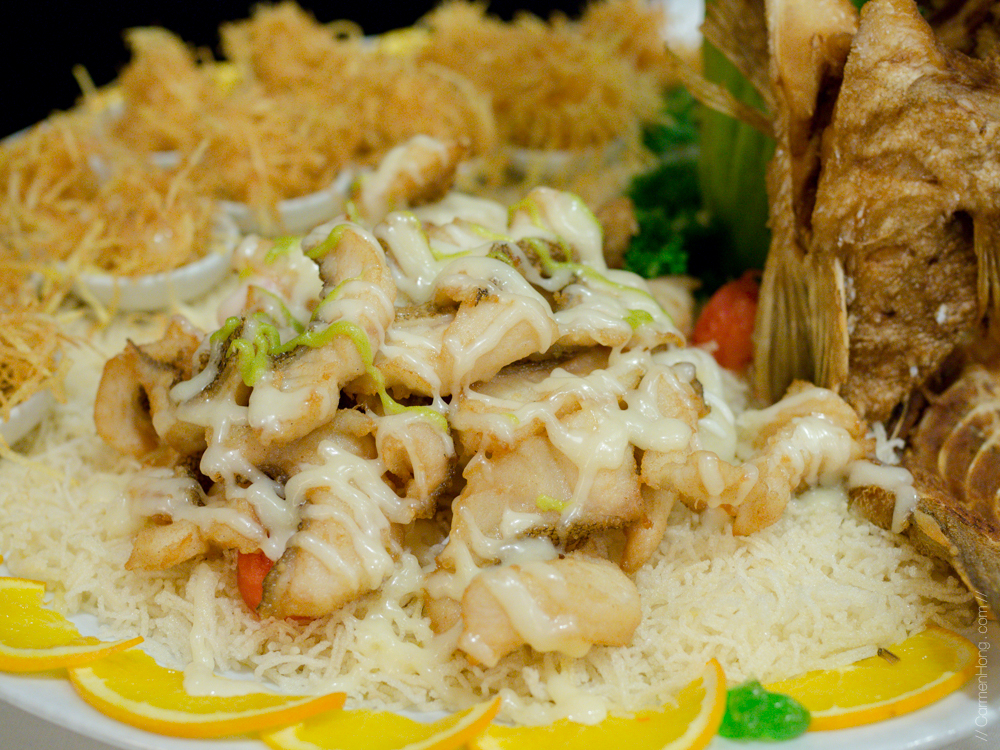 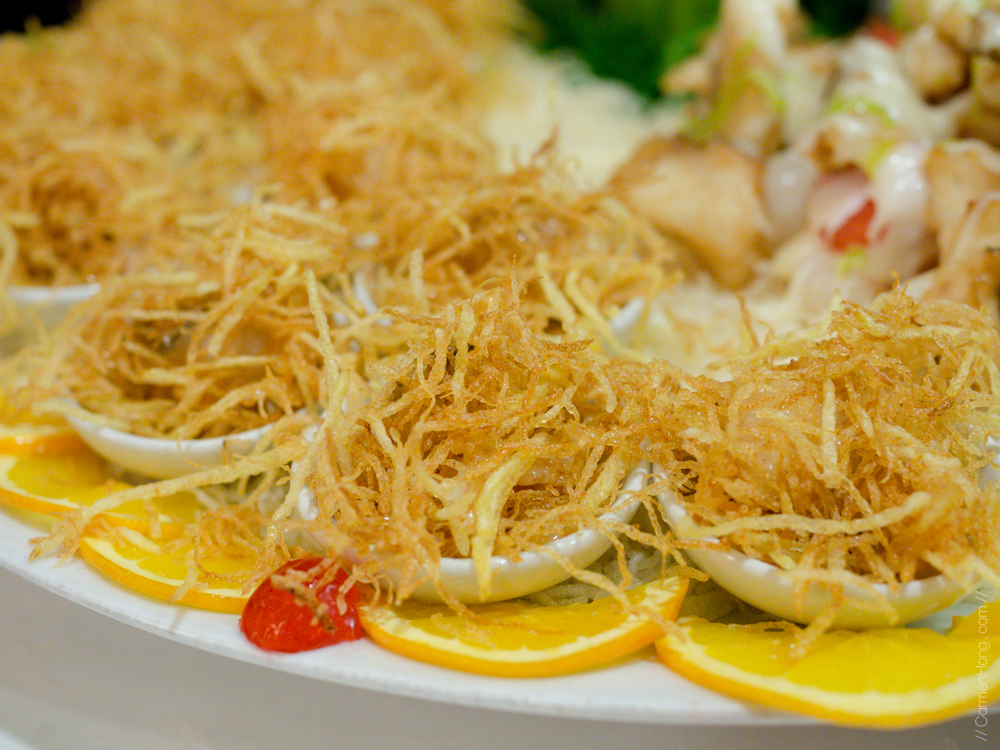 Two Varieties Sea Garoupa (Pre Order) | RM 120
When this dish arrived, I was blown away with how it was presented. Just like the presentation, I was similarly amazed with the two different styles cooked. The first was fried Garoupa fillet, topped yet again with the crappy shredded potatoes. And the second cooking style was also deep fried fish but the parts used is the meat with the skin attached. Wasabi mayonnaise is drizzled over the fish, to give it that extra oomph! 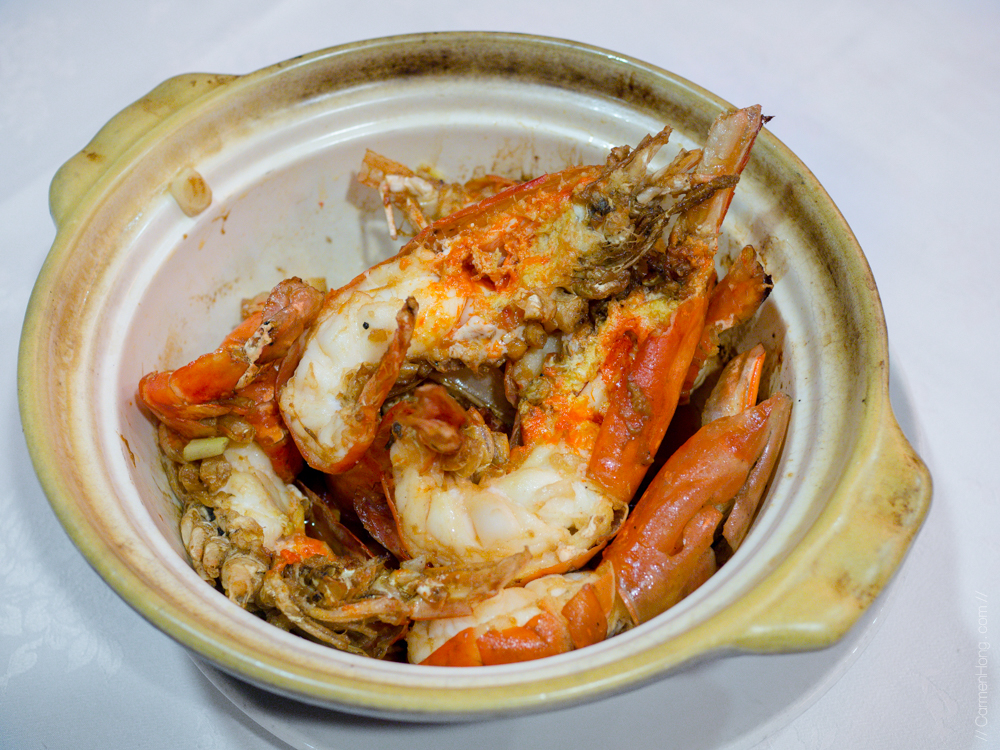 If you’re like me, then you are just the type of person that will never get bored of eating prawns especially when they are gigantic freshwater prawns with plenty of roe in them. To get the best flavours from the prawns, Chef have used three different wines to cook the prawns which is the yellow wine, rice wine and Shao Hsing wine. Personally, I loved it when my seafood dishes are cooked without overpowering sauces. 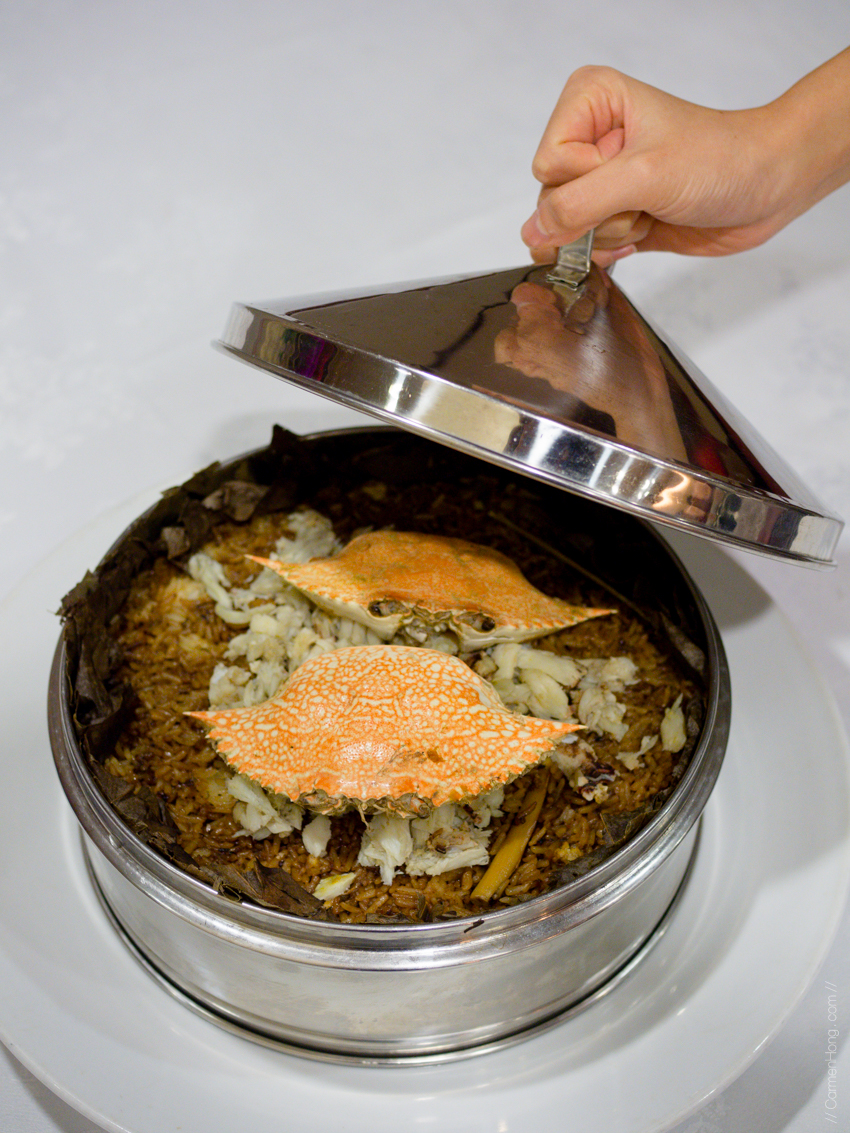 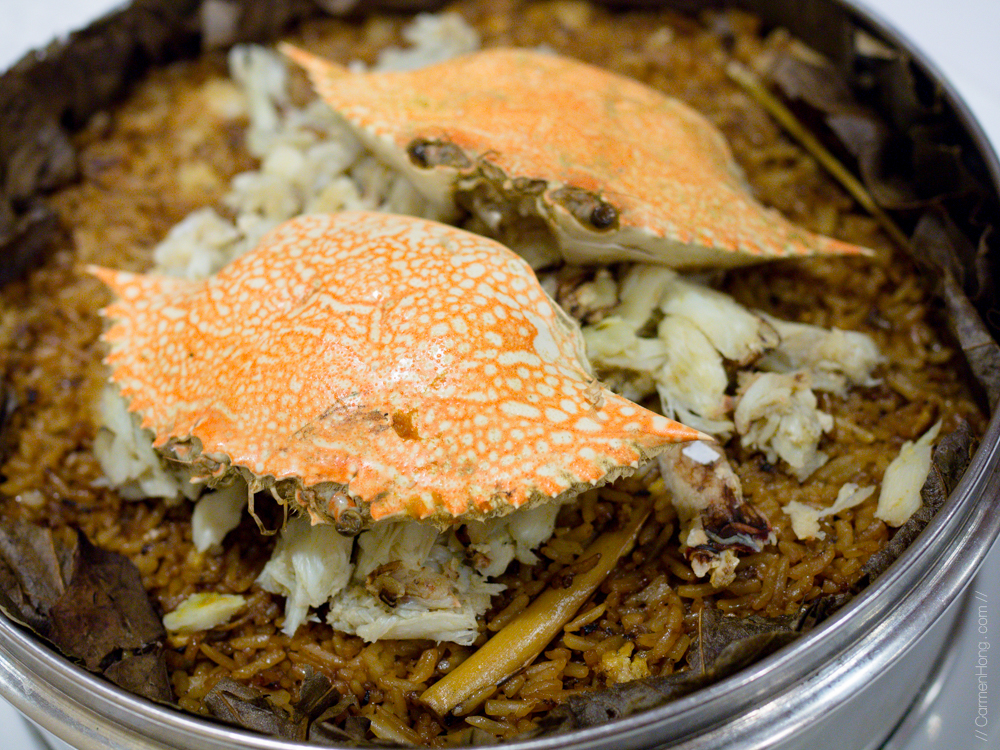 Padi Field Crab Rice | RM 48 (S) / RM 68 (L)
This rice dish originated the Hainan Island, the very same place where you can trace back the origin of Hainanese Chicken Rice. This Padi Field Crab Rice is similar to a chicken rice dish but different in the colour of the rice and this is topped with generous serving of crab meat. With this dish, you can eat crab meat without the hassle of peeling off the shells off! 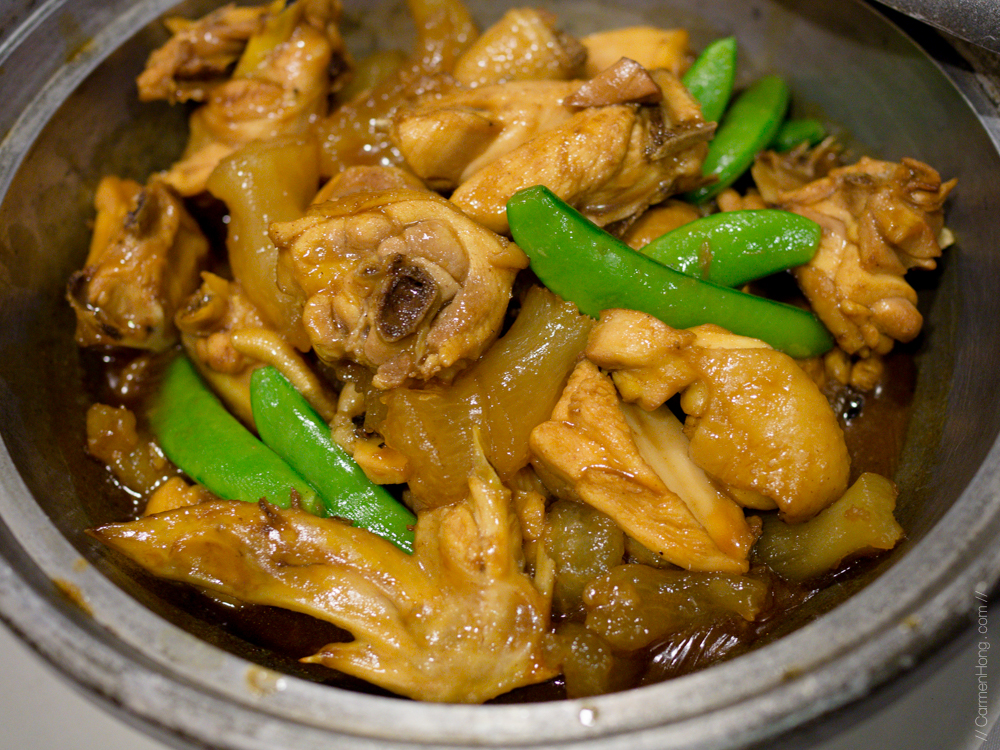 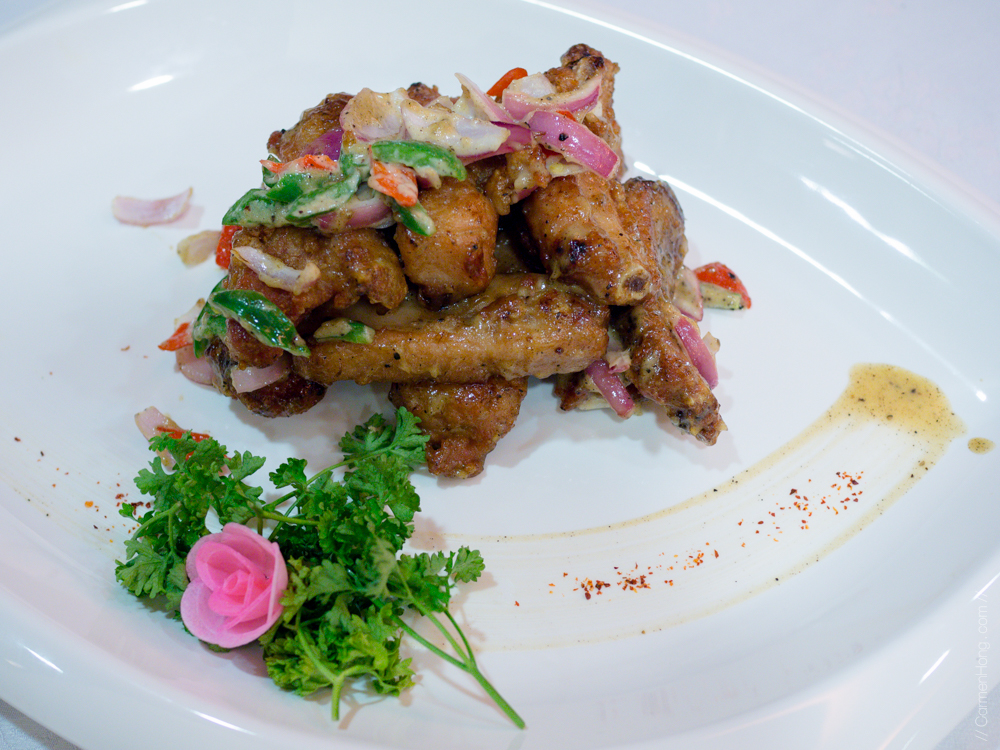 Fried Pork Ribs with Black Pepper Sauce | RM 5 per rib (minimum order of 4 pieces)
Other than seafood dishes, the chefs in Fortuna Palace Seafood Restaurant can also cook various other dishes of chicken and pork. We had the chance to try the Braised Kampung Chicken with Pig Tendon and Fried Pork Ribs with Black Pepper Sauce, which were both very delicious. The braised chicken tasted like comfort food for me, and was something I’d imagined grandmothers be cooking for their grandchildren. The fried pork ribs, is yummy too which was lightly fried and coated with black pepper sauce. 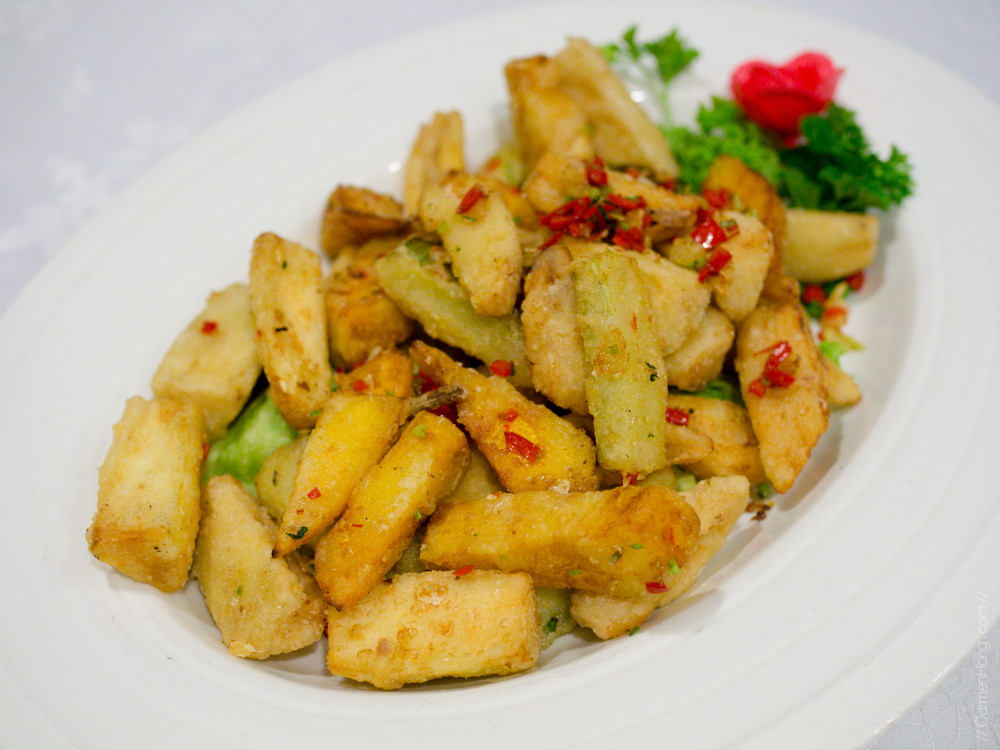 Four Varieties Vegetables with Salt &Pepper | RM 18 (S) / RM 25 (M) / RM 35 (L)
This dish is one of my favourite vegetables dish I have ever tried because of how simple its cooked but yet, super yummy! It’s lightly fried and seasoned with just salt and pepper. The four vegetables used for this dish is actually pumpkin, bitter gourd, lotus root and aubergine. I love the lotus root the most, because was crispy on the outside and very crunchy too! 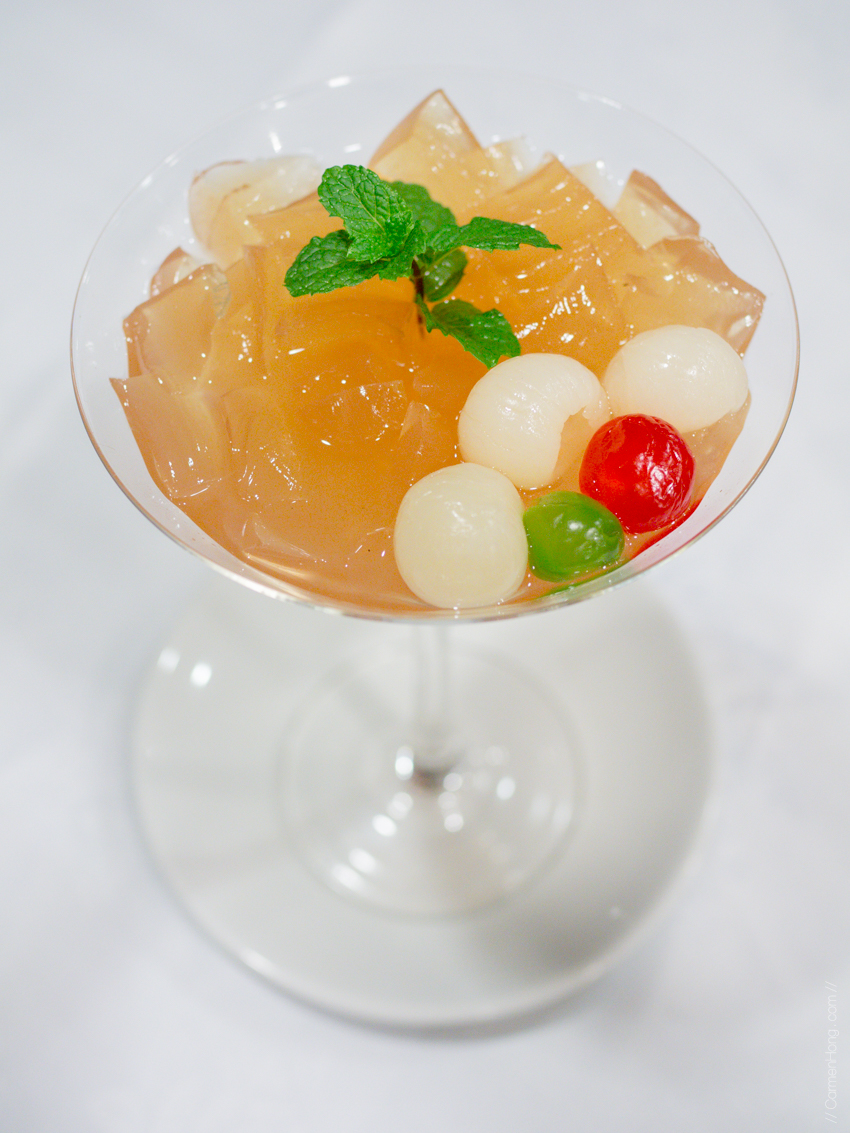 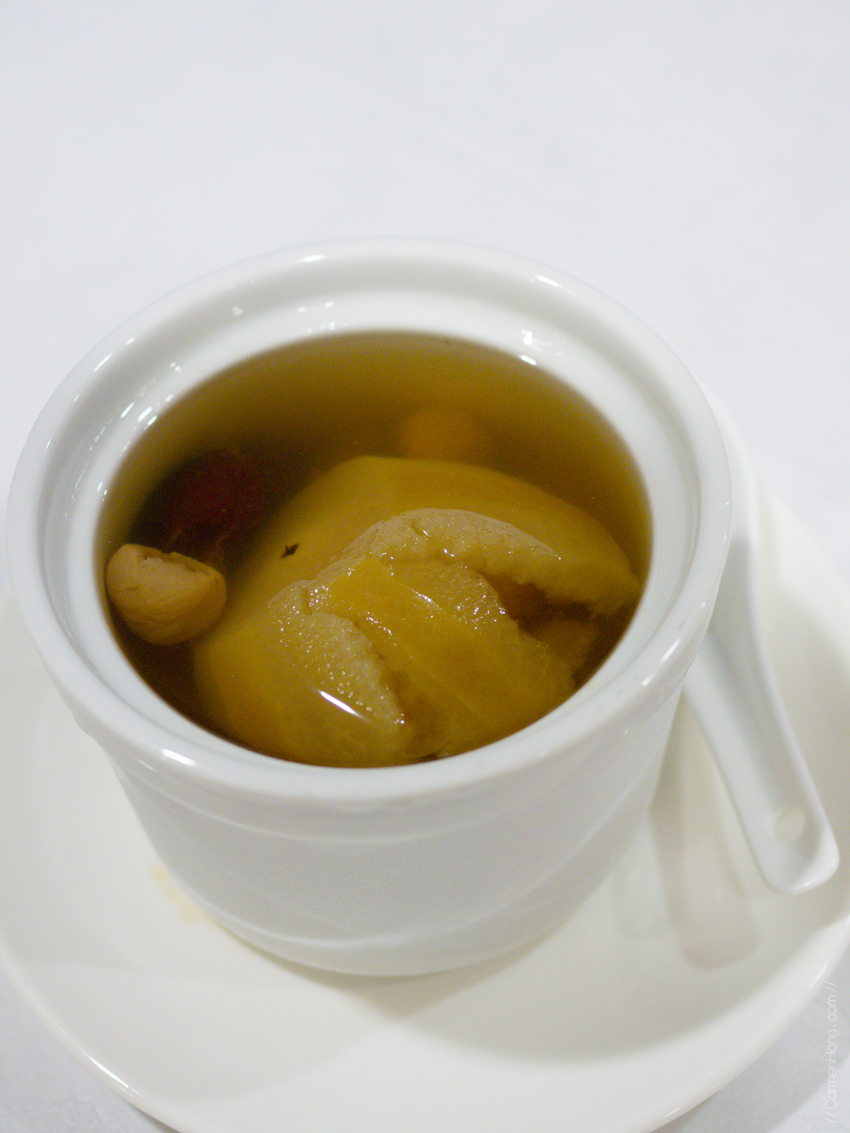 Double Boiled Apple with Dates | RM 5.90
We ended the amazing course dinner with Lemongrass Jelly which very refreshing and rich with the lemongrass flavour. This is obtained by boiling lemongrass for two whole hours and then, infusing it into the jelly. Another dessert we had was the Double Boiled Apple with Dates. It’s a very nutritious sweet soup, cooked via the traditional Chinese method.
* * * * * * * * * *
// Fortuna Palace Seafood Restaurant //
No. 17-20, Jalan KP 1/2
Taman Kajang Prima
Jalan Kajang-Semenyih
43000 Kajang
Selangor
03 – 8739 3388
Open from Monday To Sunday
11am to 230pm and 6pm to 11pm
// www.facebook.com/fortunapalacerestaurant //
* * * * * * * * * *
Share