I have mentioned more than once how much I loved Publika (or more accurately Solaris Dutamas area) for the abundance of good food located over there. The best part of it is you don’t really even need to be trying too hard to look for one. This time around I’m back in Solaris at one of the oldest Mediterranean and tapas restaurant in Kuala Lumpur. It’s called Moussandra (Mediterranean and tapas restaurant). I have tried many different cuisines before but I never tried those of the Greek, Spanish and Italian cuisine where Moussandra serves tapas and dishes from these cuisines. 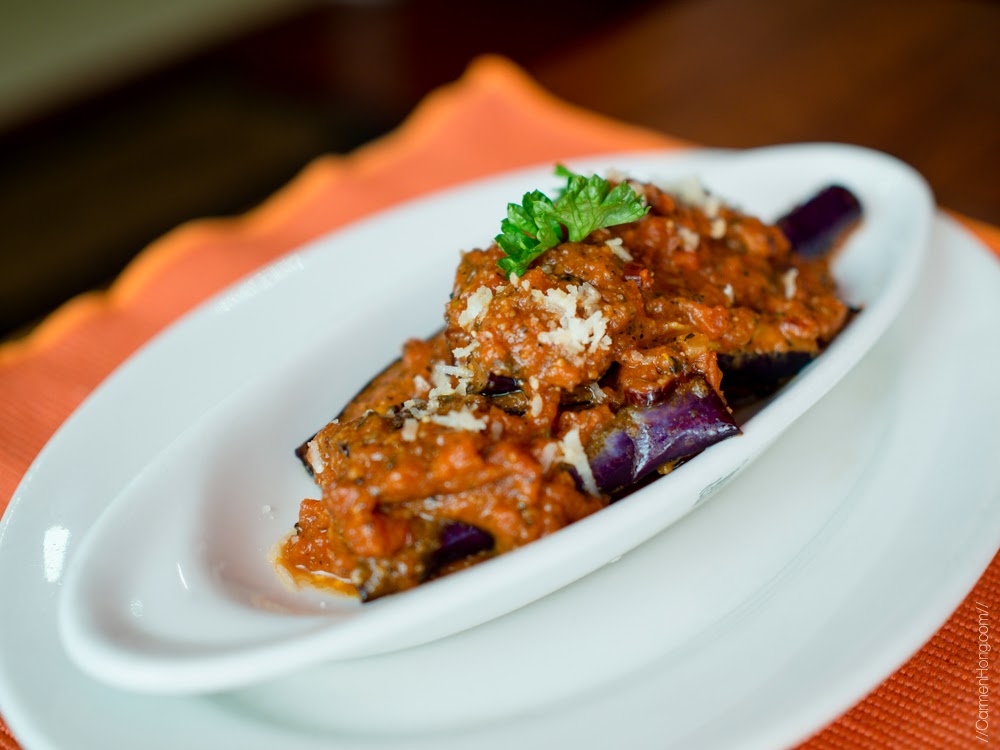 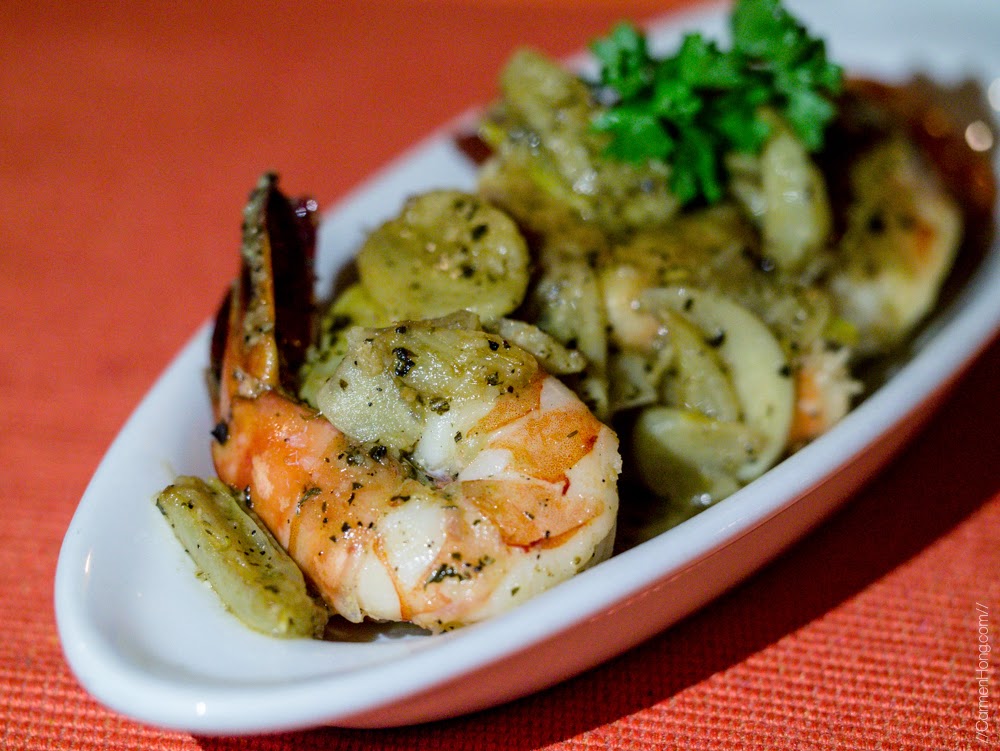 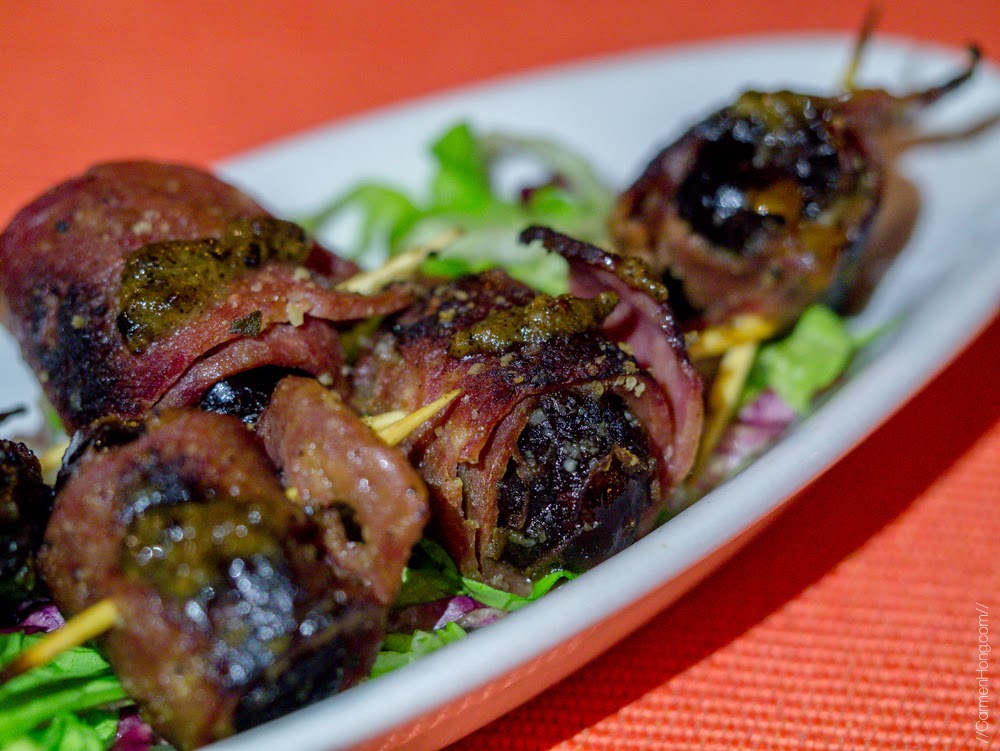 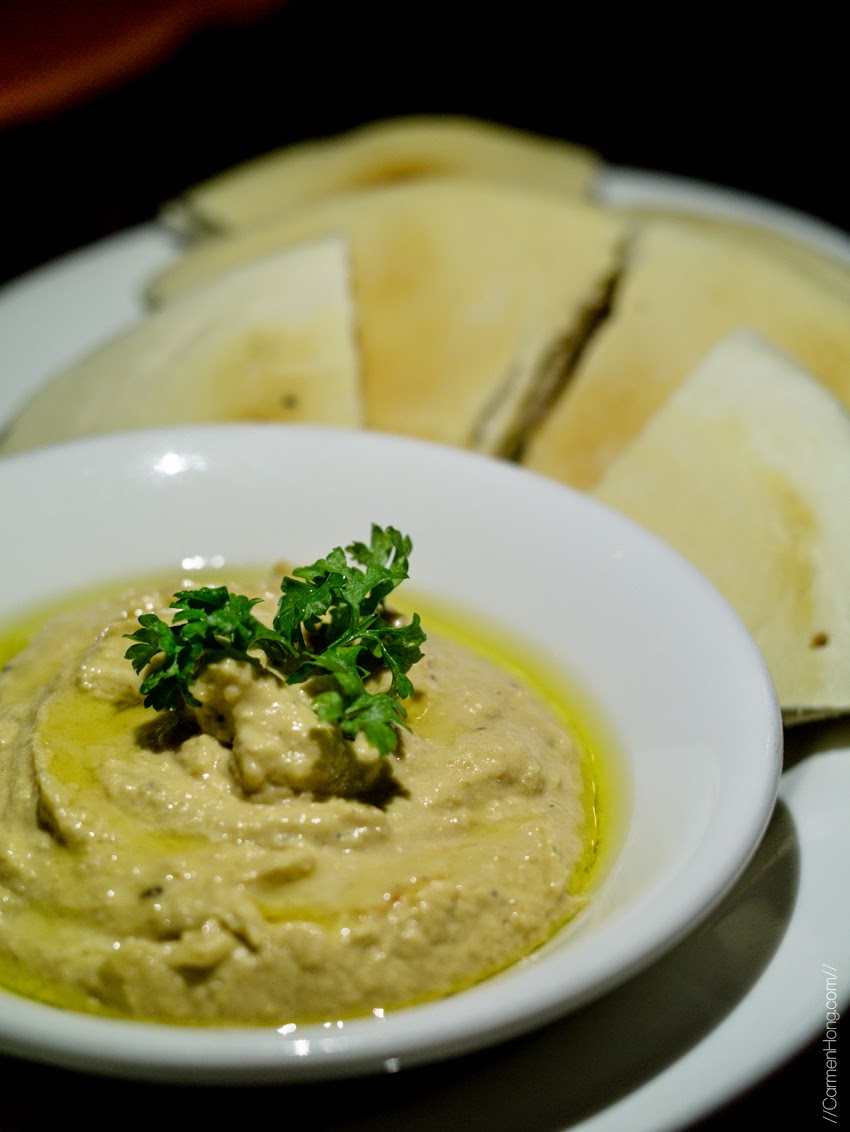 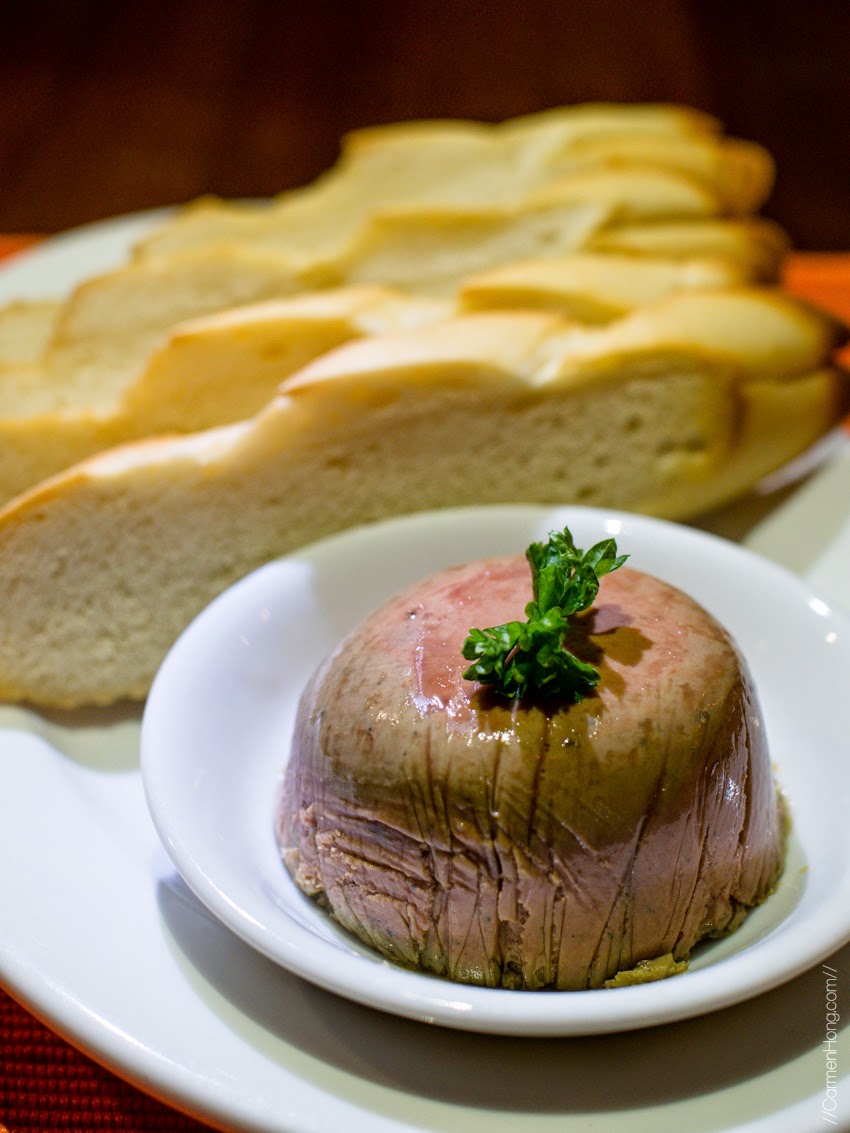 Terrina De Pollo ; Chicken Liver Pâté with Baguette | RM17
All together we sampled these five tapas, and it is probably no surprise which my favourite one was. The Gambas Al Ajillo (Garlic Prawns in Olive Oil) won my heart over because it was prawns, so succulent with the rich aroma of garlic. I do realise it is also one of least adventurous one, with the palate being somewhat similar to the local Asian flavour; garlic and prawns.
The other tapas which left an impression was the Terrina De Pollo (Chicken Liver Pâté with Baguette). I have only ever heard of pâté from watching movies and I never had the chance to try them till now. Here in Moussandra, the pâté is made from chopped chicken liver. I can literally hear some of you going, “Uhh, really?”. Yes! It is so. I expected it to smell rather strong but was surprised that there wasn’t any. It was almost odourless. The way to eat the pâté is by spreading it over the baguette. I did just that and I felt as though my tongue was immediately engulfed with a strong aftertaste of liver. If you never liked liver, you will most definitely dislike this. On the contrary, I was told that there were some customers who never liked liver, found this dish rather nice.
On a first look, I thought the Datiles Con Bacon (Beef Bacon wrapped Dates stuffed with Almond) was similar to the Grilled “Bacon” Wrapped Snails that I had in Acme Bar & Coffee, The Troika. But instead in the first bite I was welcomed by a sweet savoury taste of dates and almond, together with a hint of beef bacon. I would say the sweetness of the dates did sometimes overpowered the bacon. 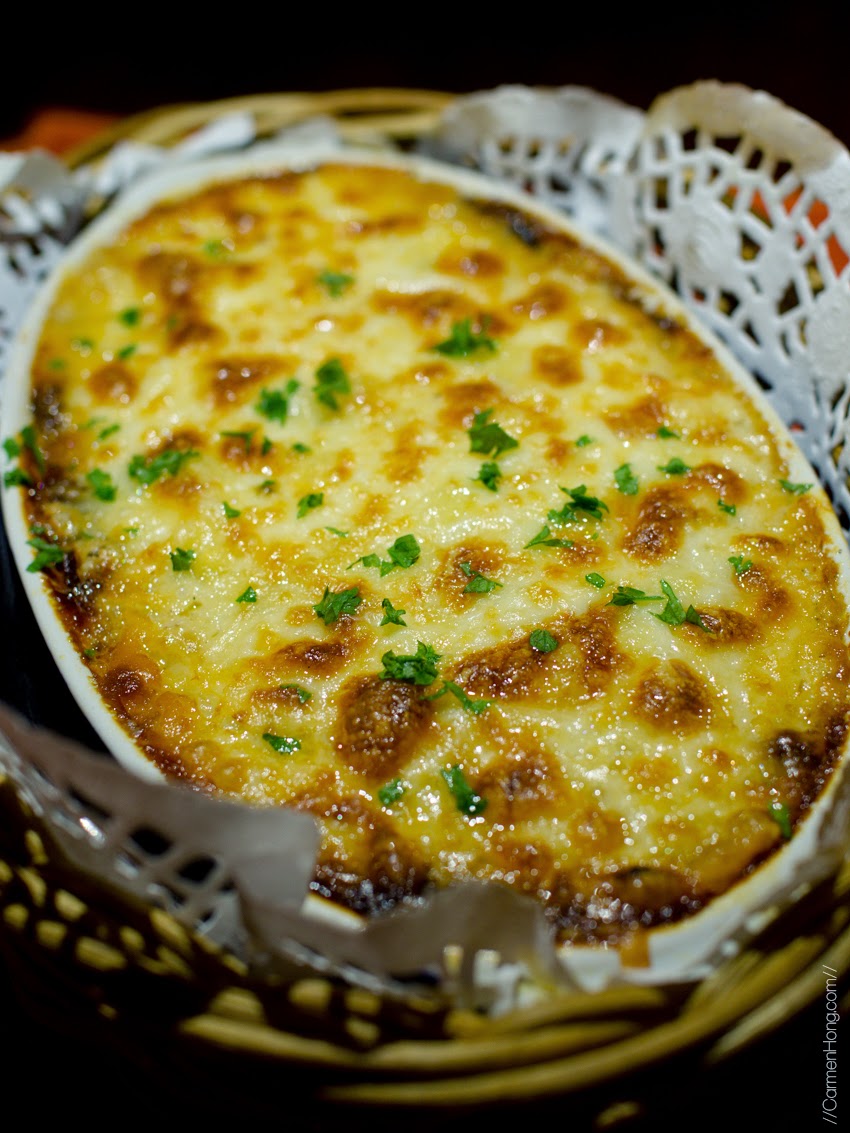 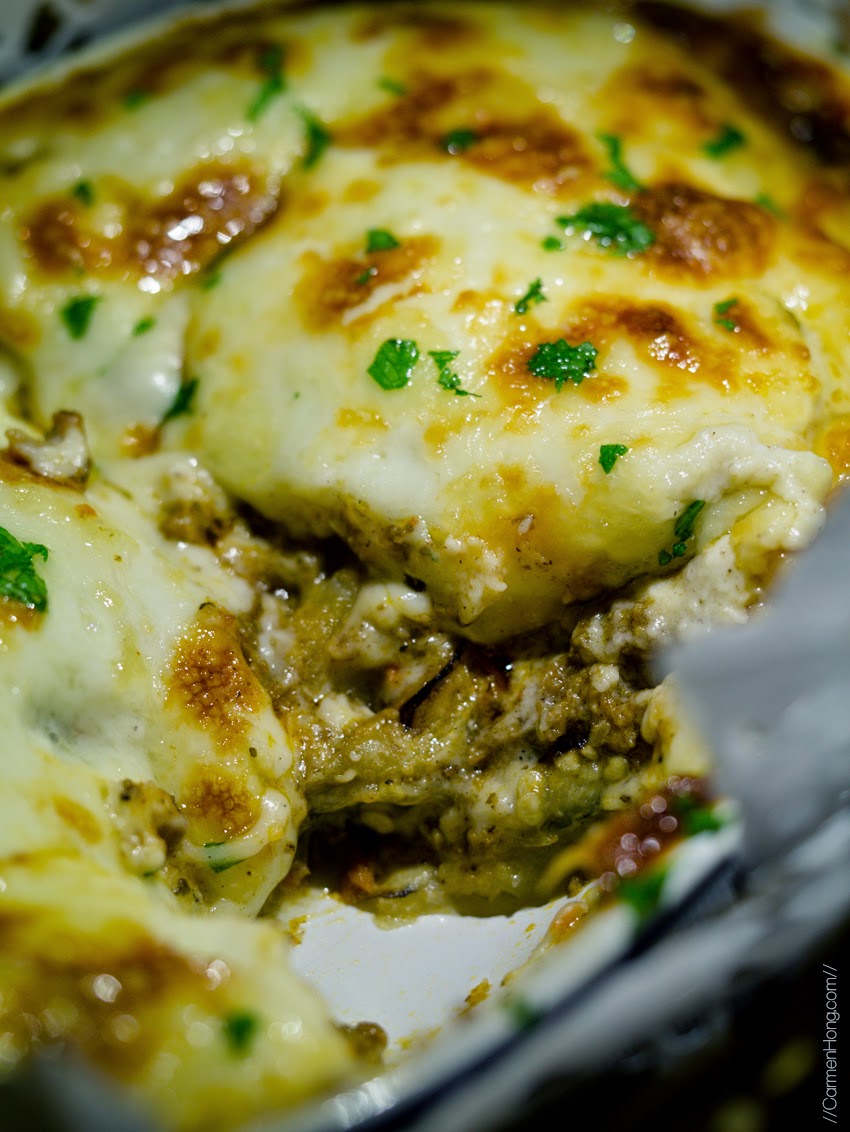 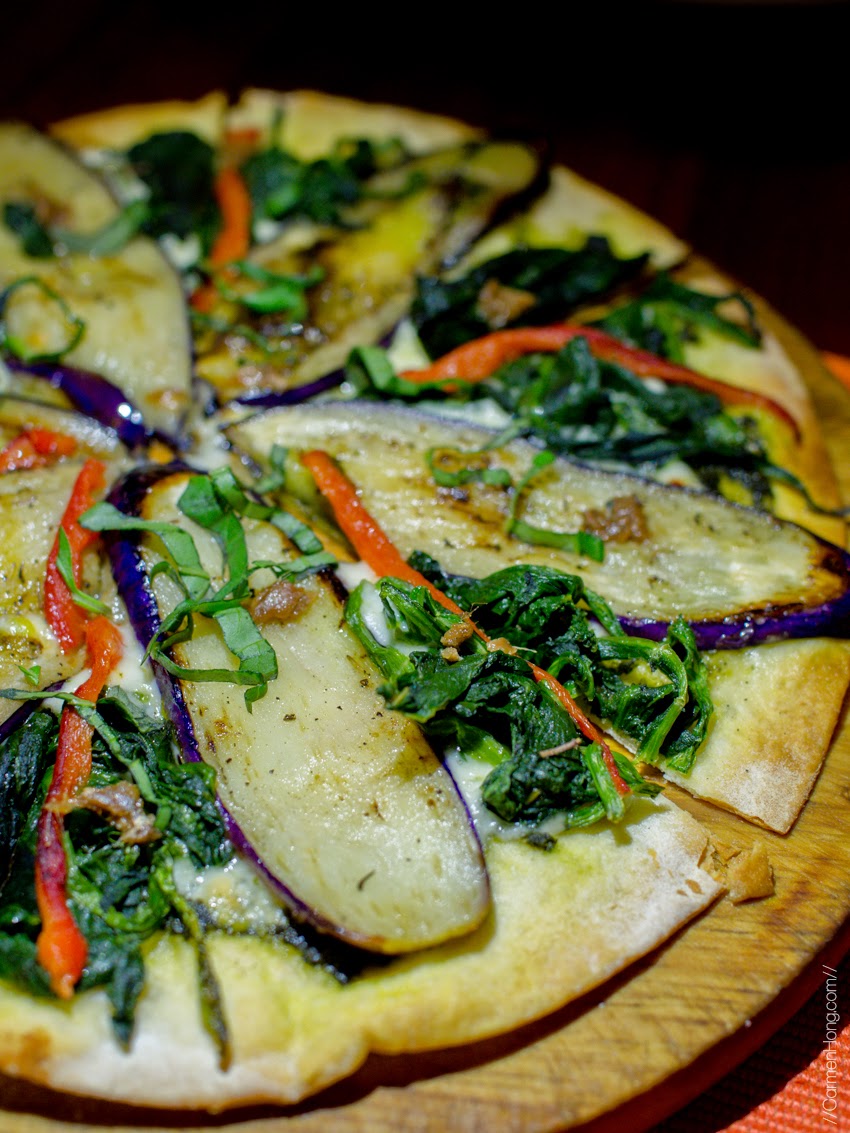 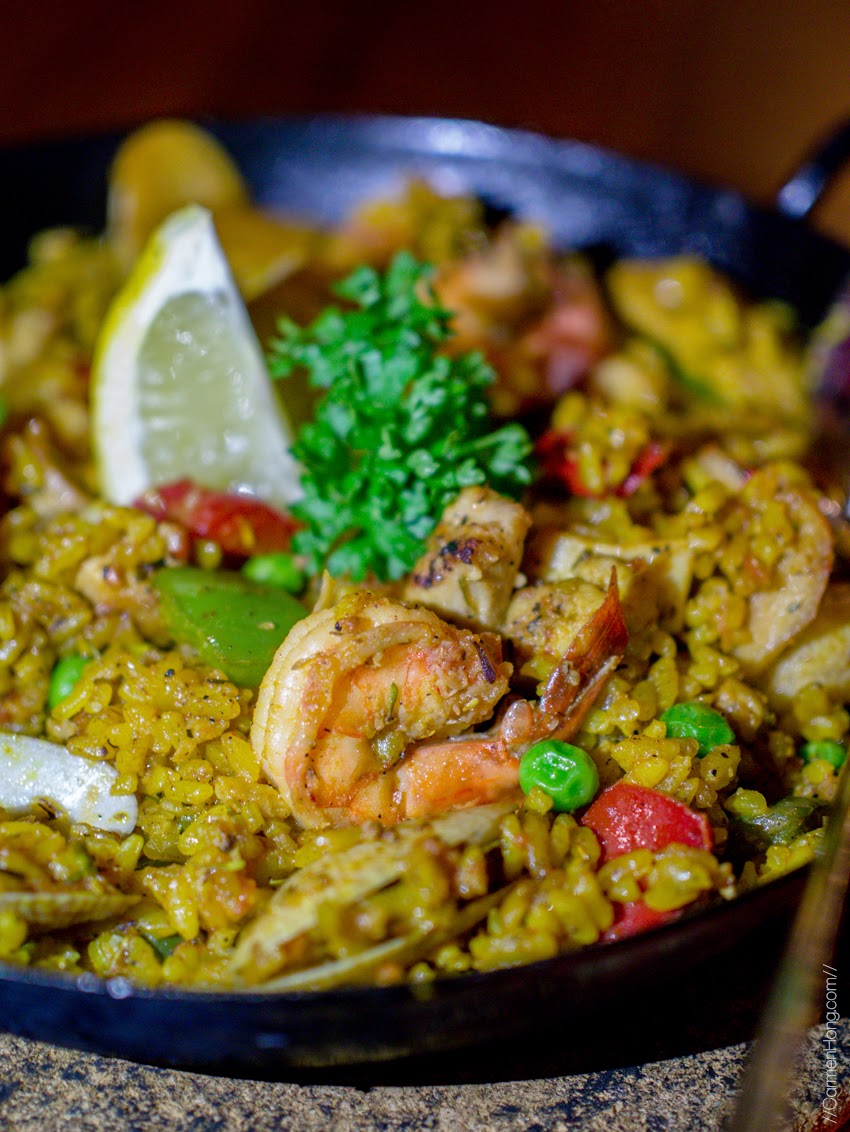 Paella Valenciana | RM45
Much like the tapas served earlier, I have never tried these few mains before elsewhere so I have to tell you that it is a new experience eating these unique cuisines. You have to excuse me because I also don’t happen to have any ideas on how these should taste like. So what I’ll be sharing will be what I personally tasted and felt.
For the Moussaka, it came with an option of chicken or lamb in which they were minced and cooked together in layers of eggplant, potatoes, white sauce and cheese! As cheesy as it looks, the cheese used for the dish was just the right amount for me. I can imagine why this was the crowd favourite in Moussandra, it’s a comfort food on its own! As for the Pizza Primavera, it is a (extremely) thin crust pizza topped with more eggplants(!), slices of red peppers, spinach and mozzarella. While I never had been a fan of an almost vegetarian (they had bits of anchovies which I didn’t taste of), this didn’t convert me. Never been a fan of so much veggies on my pizza, but kudos to the chef for perfecting the pizza’s crust! It was crunchy even after 15 minutes.
Last but not least is the Paella Valenciana, (my first paella everryybody!). I have heard so much about paella, I was rather excited to try this when it arrived. There is nothing more scrumptious than having most of my favourite food all in a pan! There were squid, clams, fish, prawns, mussel, chicken, chicken sausage and vegetables all over the pan. The rice was more starchy but oh-so-flavourful. It was cooked with saffron, something that again was my first time having it. Yums! 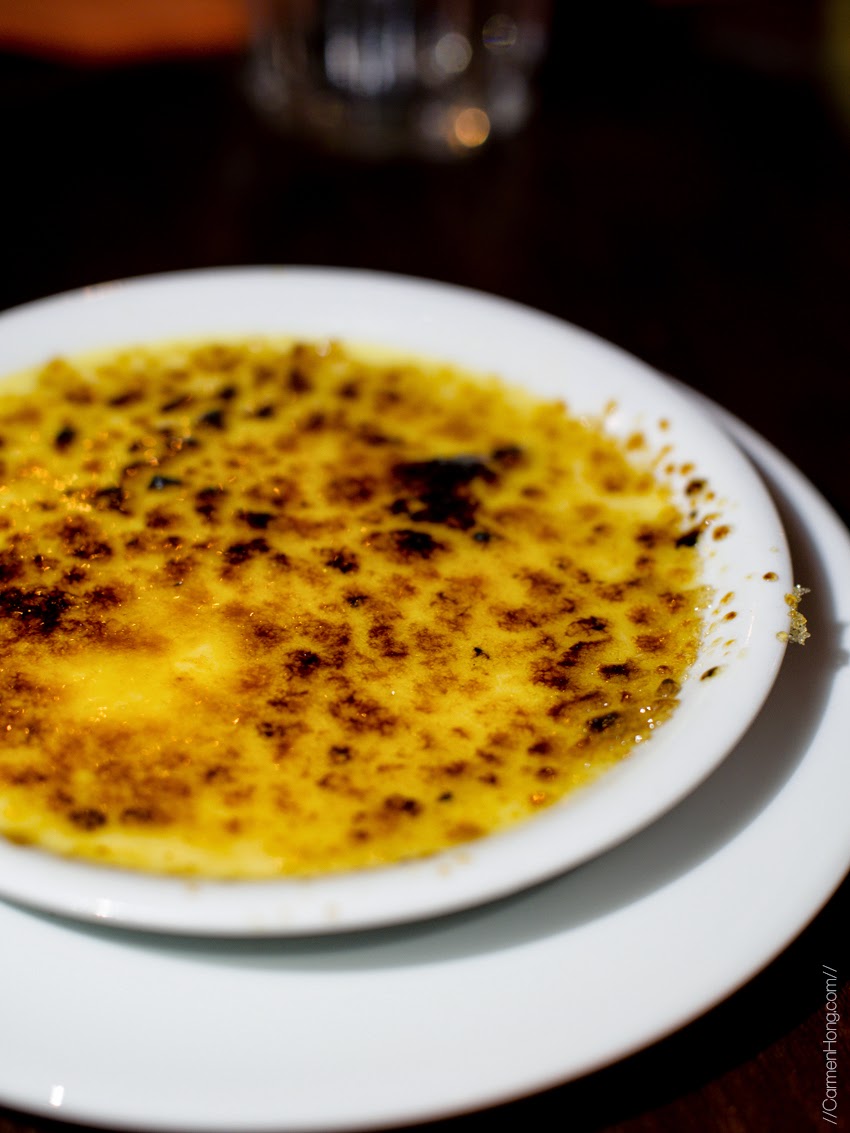 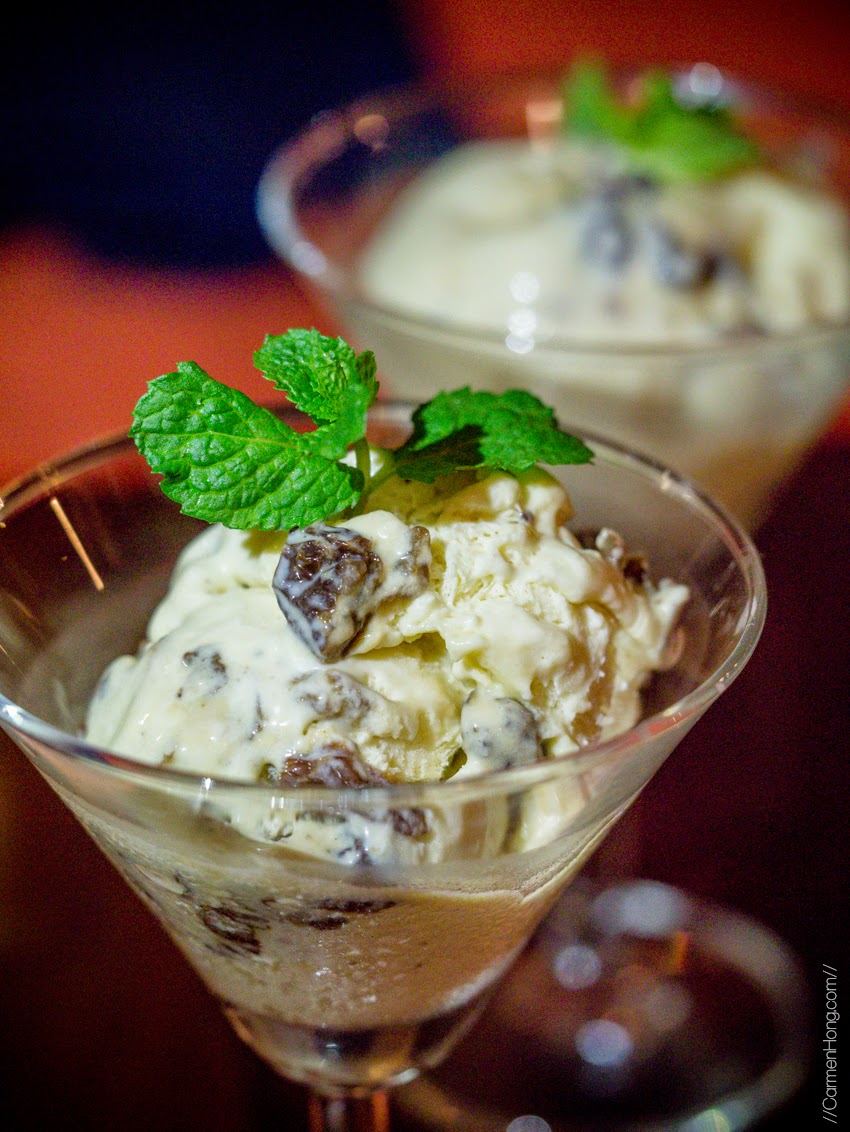 Helado Del Ron Y De La Pasa ; Homemade Rum & Raisin Ice Cream | RM12
We ended the dinner feast for the night with an oh-so-delicious Vanilla Creme Brulee ; smooth custard with a coating of a hard top of cooked sugar over it. Yums! And then we also had the Helado Del Ron Y De La Pasa (Homemade Rum & Raisin Ice Cream), where all you need is a tiny scoop of the ice cream and *bam* delicious smooth ice cream with notable rum taste hits you! There is then plenty of raisins in the ice cream too, providing different texture as you savour the dessert.
Overall, I loved the dining experience at Moussandra! It was unique and definitely tickled my taste buds in the Greek, Spanish and Italian cuisine. I may not be able to visit any one of those countries just yet, but being able to taste their local food right here in my home country is one of the reasons why I love my country even more. Or my city to be exact, Kuala Lumpur!
* * * * * * * * * *
&. Thanks to HungryGoWhere Malaysia and Moussandra for having me. +
This food tasting session was organised by HungryGoWhere Malaysia – Discover, Eat, Share today!