It’s no secret that Bangsar is pretty much a food haven, so much so that if you close your eyes, randomly head to any direction, you would end up in a decent restaurant. But have you ever found yourself in Bangsar and actually craving for some comfort Chinese food? I know I have, and I couldn’t think of any place in Bangsar that serves just that. 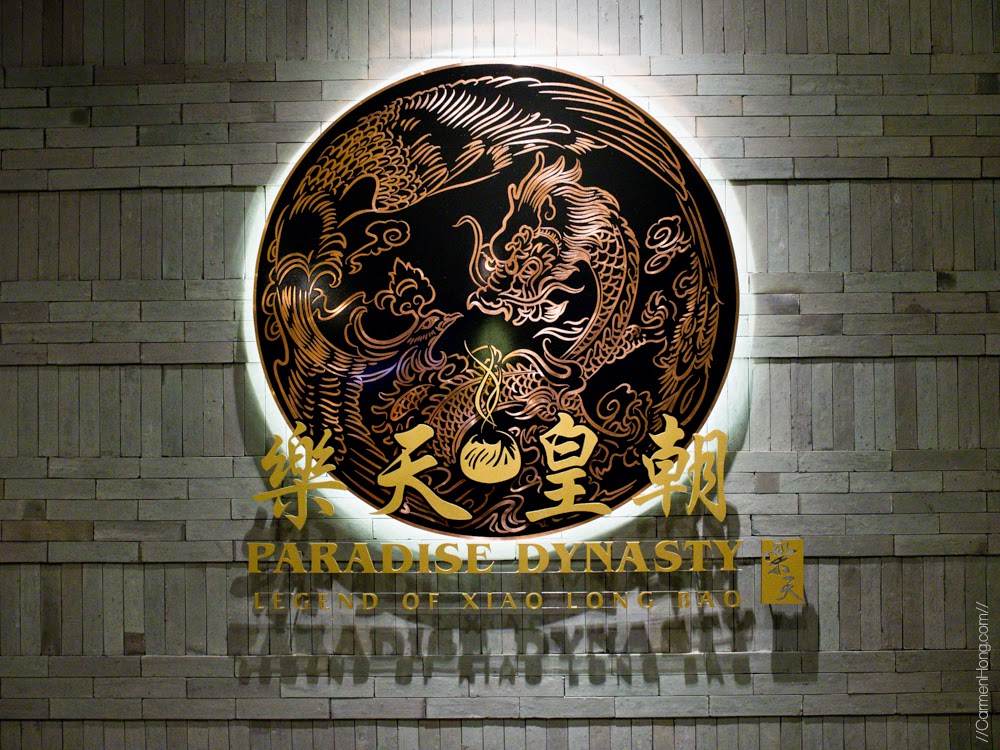 Well that was that, until I found out that Paradise Dynasty actually had a branch in Bangsar Village. Paradise Dynasty is famous for the World’s First 8-Flavoured Xiao Long Bao, or the rainbow xiao long bao as I would prefer to call it. They also happen to serve one of the best ‘la mian’ with their amazing pork bone soup.
I absolutely love their pork bone soup, I remember the first time I had it at their Paradigm mall outlet. The first sip, and that was all it took for me to fall in love with the soup. Mind you, that happened about a year ago and up till now, it is still one of my comfort food.
And now, just at their Bangsar Village branch, Paradise Dynasty have just launched their ala-carte Chinese dishes in addition to their existing menu. Their ala-carte menu is introduced for customers who are looking to eat Chinese food, those with rice and dishes type. These dishes are from the same chefs who brought the xiao long bao and the delicious la mian, so needless to say I was expecting the dishes to be delicious. So, were they? 🙂
* * * * * * * * * *
For this post on the food review, I would be giving a short summary of each of the dishes I sampled..paying more attention to those I loved. And here it goes! 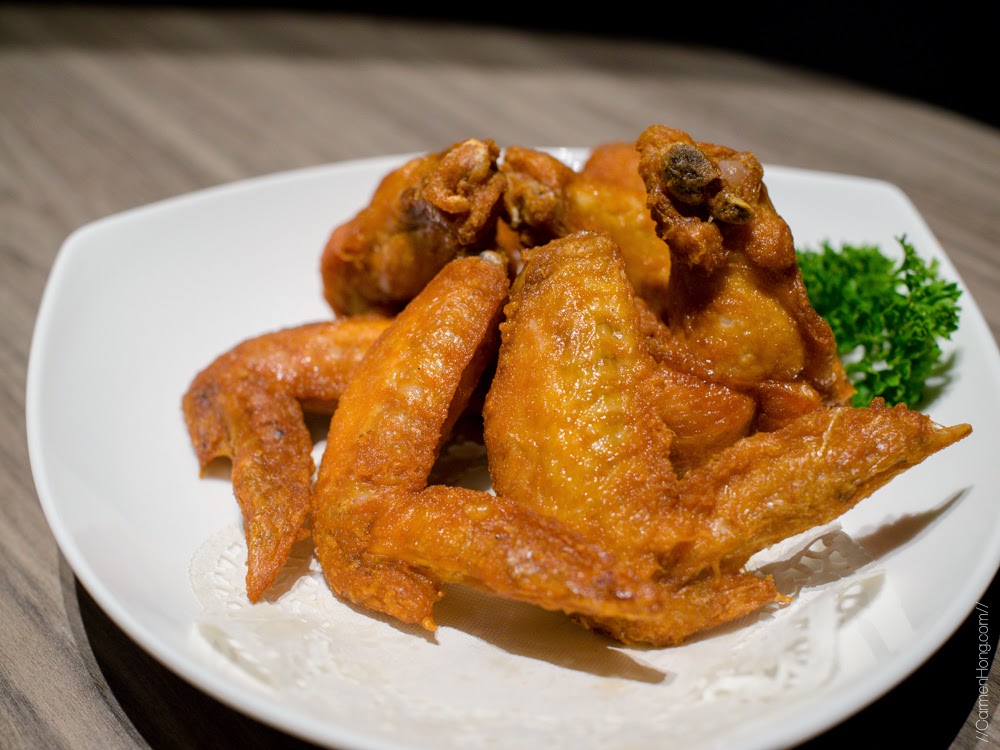 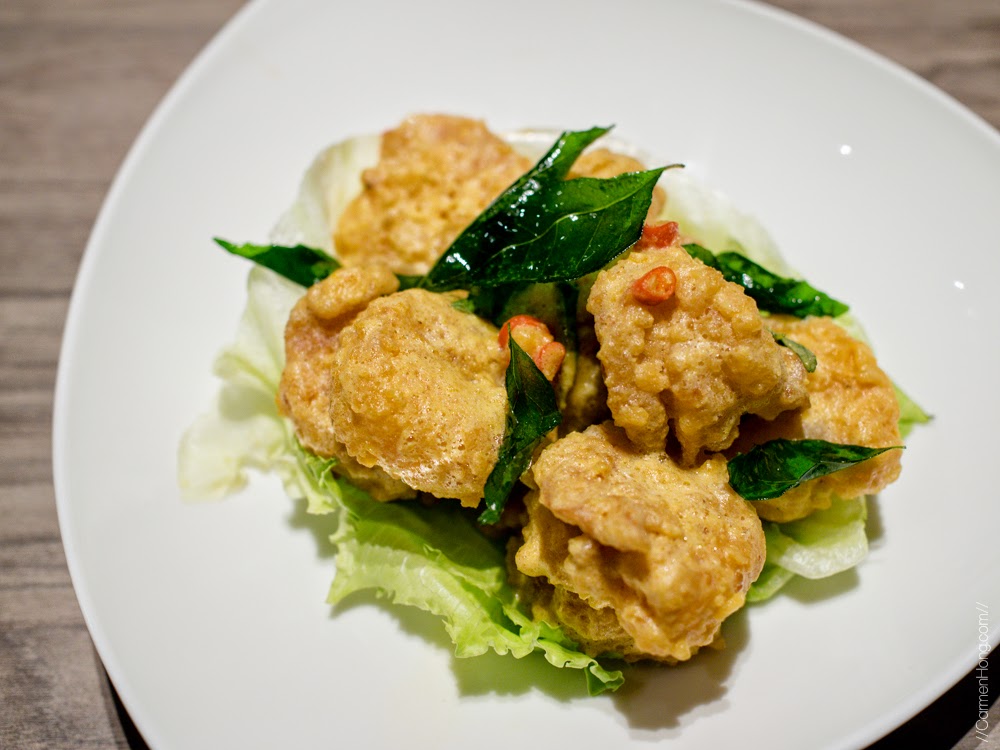 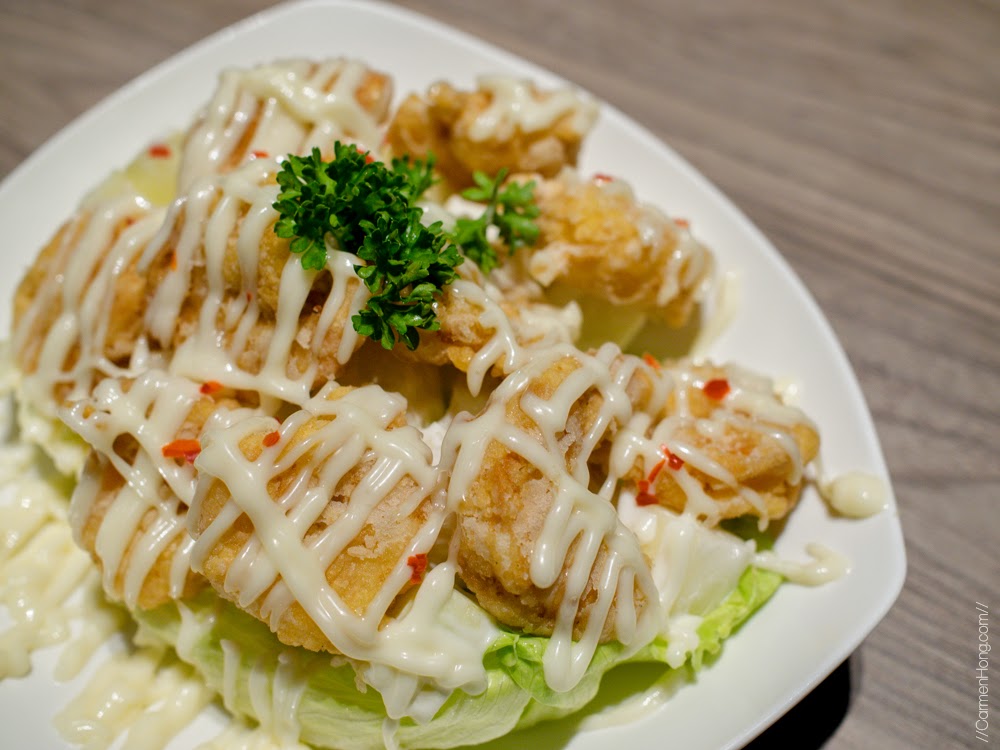 | Crisp-fried Crystal Prawns in Fruity Salad Sauce |
I might be biased when I say that I love the two prawns dishes I had because prawns are my favourite type of seafood. I have tasted crabs cooked with salted egg yolks but I never had the one with prawns. I must say I quite like it, although I would prefer the prawns to have a stronger, salty egg yolk taste. As for the prawn in fruity salad sauce, this is the favourite among kids and I can tell why. It is served with a tangy mayonnaise sauce with fruits, yums. The combination works wonder and is quite refreshing. 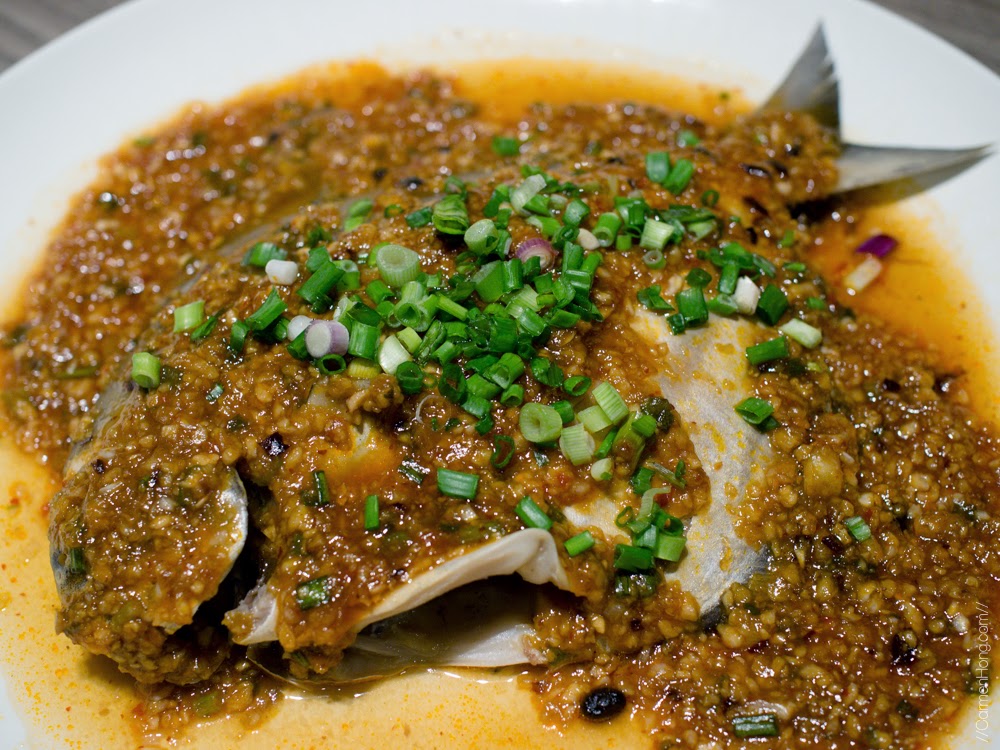 | Steamed Promfret Fish with Homemade Garlic Chili (Spicy) |
This dish arrived looking absolutely glorious, buried with a combination of garlic and chilli sauce. Besides prawn, my next favourite meat is fish. This fish served was very fresh and the sauce went well with the fish meat. I was also impressed by the waitress’s ability to de-bone the fish so skilfully. Here is a picture of her in the midst of that process. 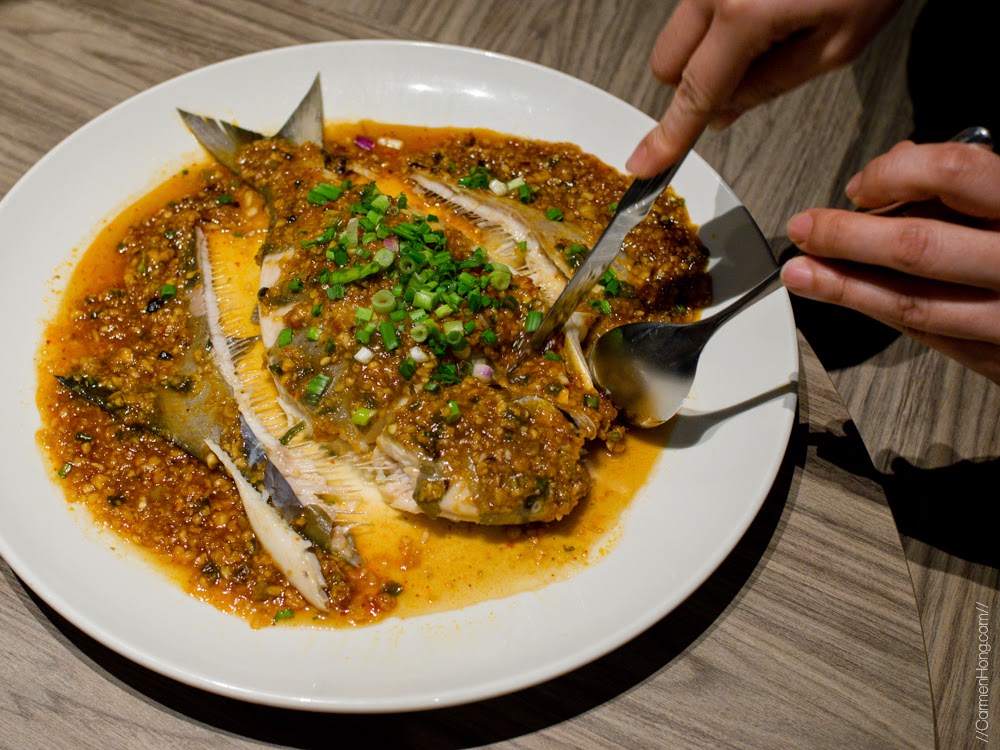 | Steamed Promfret Fish with Homemade Garlic Chili (Spicy) |
So, the next time you’re here in Paradise Dynasty and you ordered this fish, you can ask the waitress to help you de-bone your fish. Then, you can sit back and watch how she skilfully does it. I was rather impressed by it, it is quite amusing to watch and it was all done within minutes! 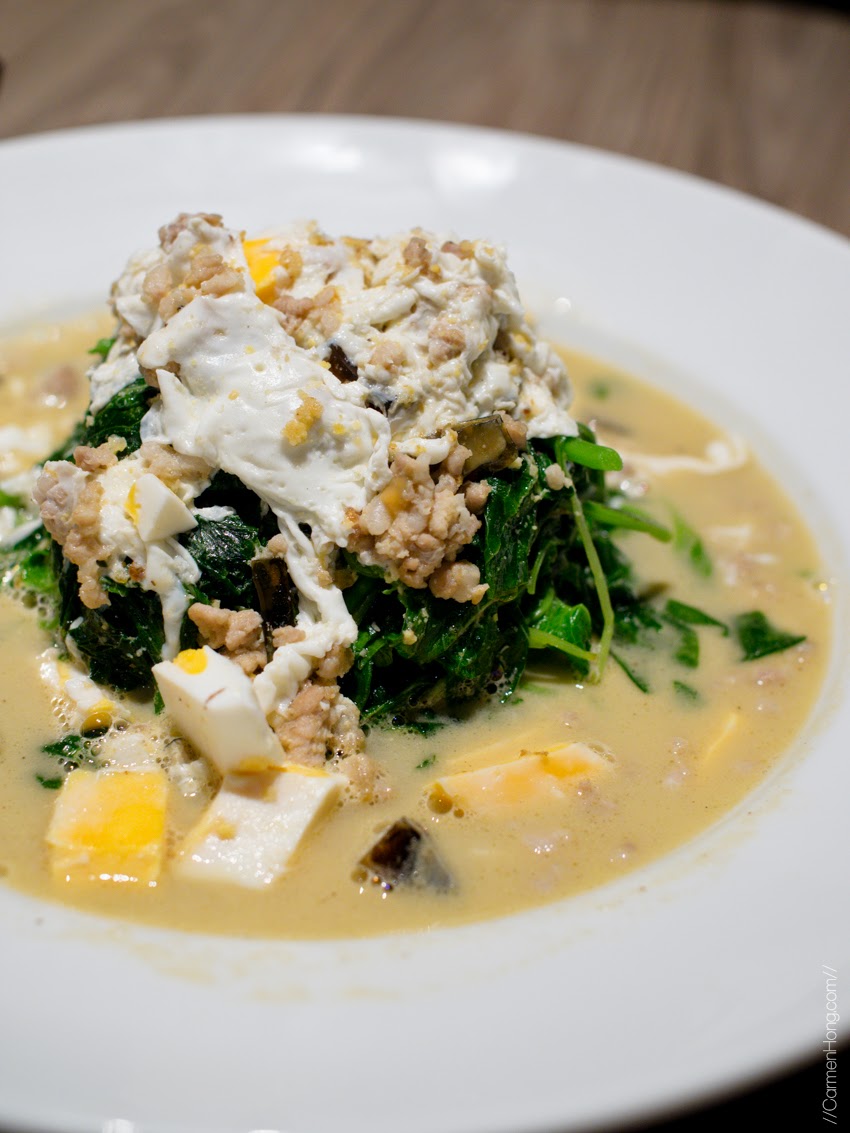 | Poached Chinese Spinach with Egg Trio and Minced Pork |
When I first saw this in the menu I was expecting something completely different than what arrived at our table. Poached would actually meant that the spinach is cooked with soup, along with three different types of eggs (chicken egg, salted egg and century egg) and minced pork as well. It was unique because this felt so much like a home-cooked dish and it was delicious, making it perfect for comfort food on a rainy days or in fact any day would be perfect. 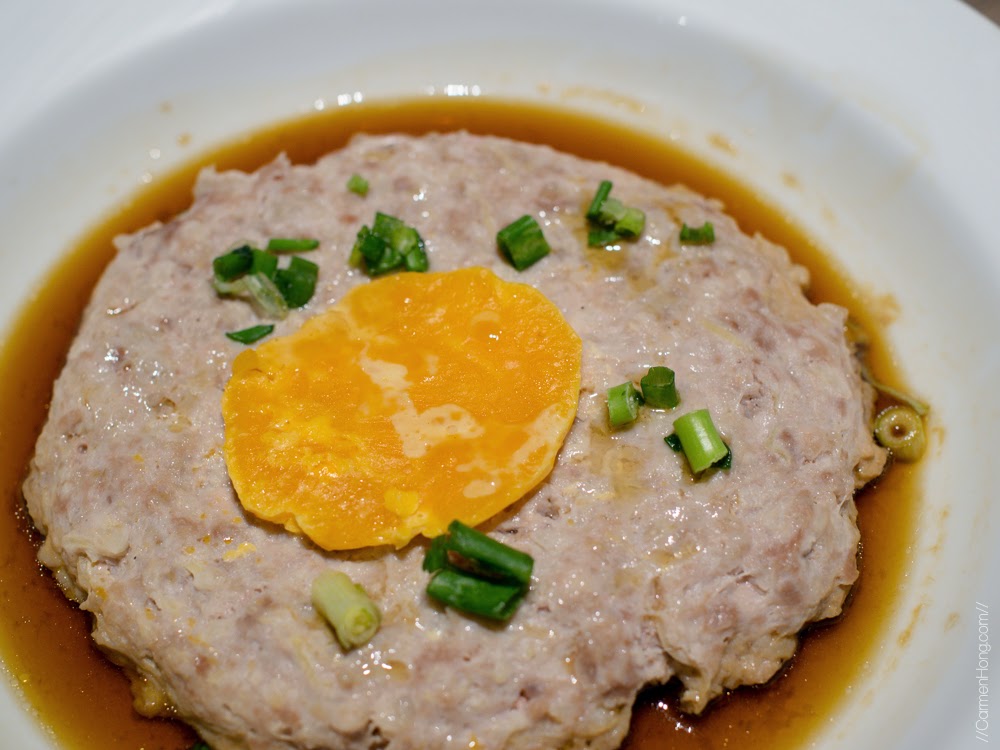 | Steamed Minced Pork with Salted Egg and Water Chestnut |
Just like the Poached Chinese Spinach with Egg Trio and Minced Pork dish above, this steamed pork dish felt pretty much like something my mom made at home. The only difference was that Paradise Dynasty’s version have salted egg yolk. The salted egg yolk gave the dish a twist, and that made it stand out from most of the common minced pork dish we would have tasted before.
* * * * * * * * * * 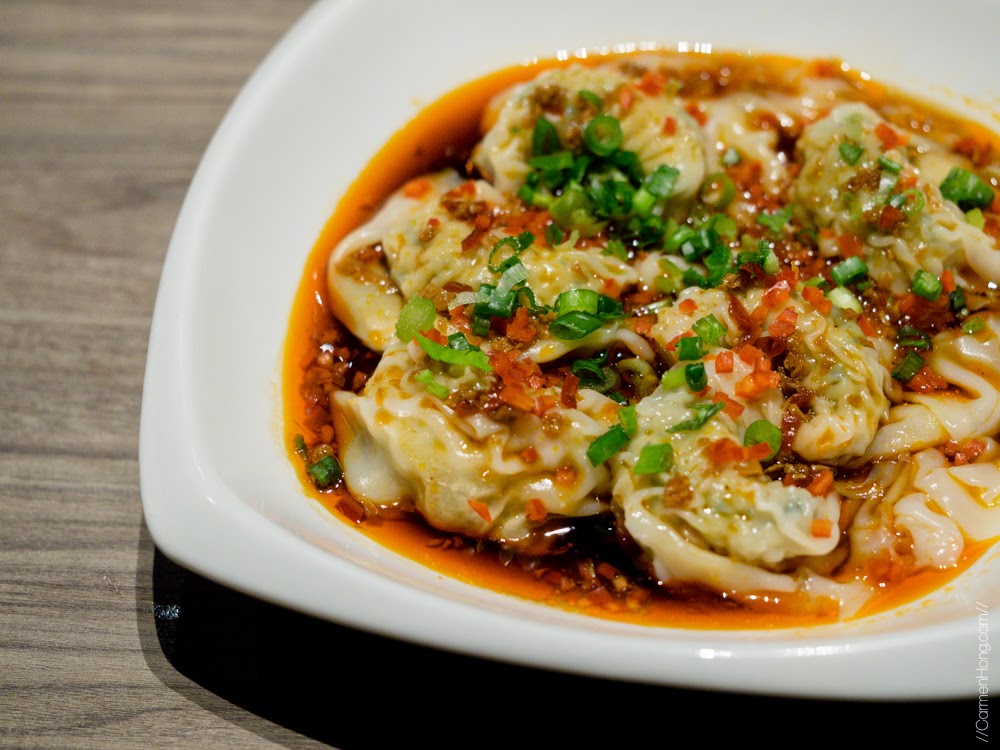 | Pork Dumpling with Hot Chili Oil |
As spicy and daunting this looks like, it actually was bearable in terms of spicy-ness. I don’t personally like my food to be too spicy but I felt this was still mild. The dumpling’s skin used was smooth and the fillings were meaty too. I would say this was an interesting dish, because I never seen dumplings served in oil. 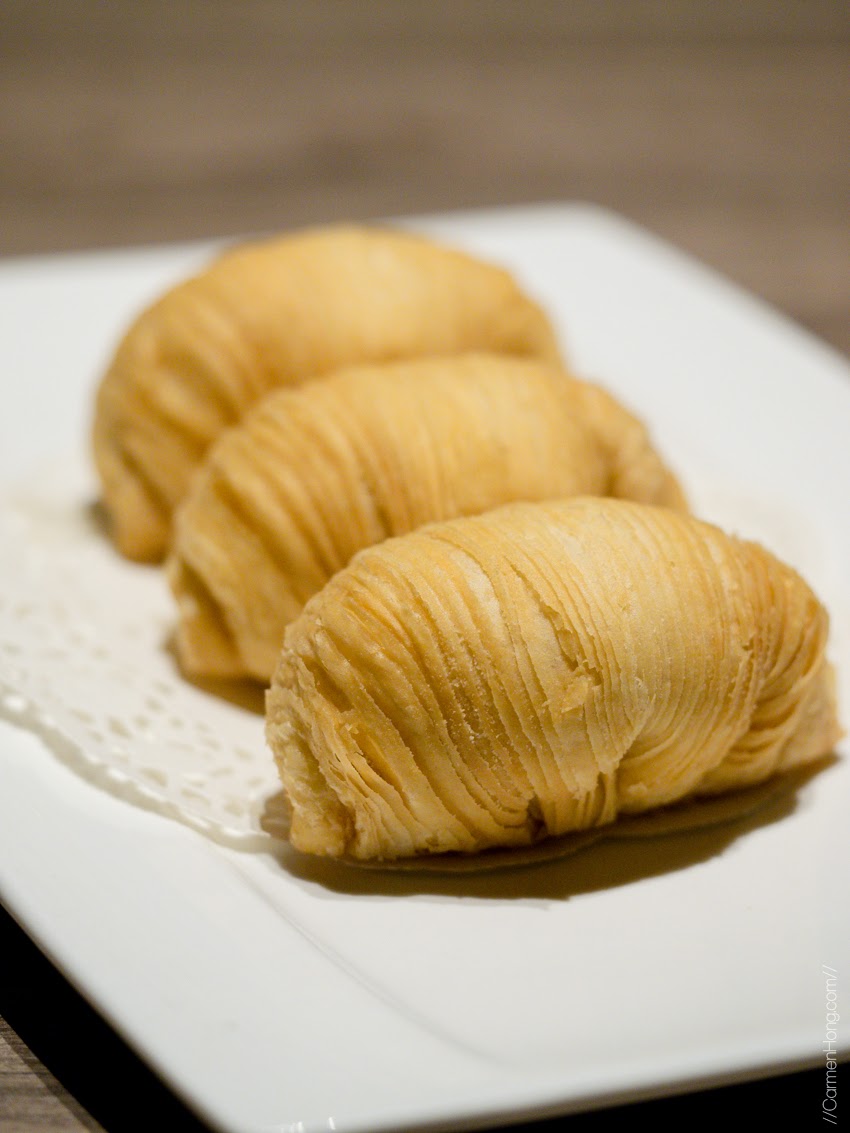 | Radish Pastry  |
And meet the deliciously intricate radish pastry; you can see the delicate layers on the pastry. Don’t be deceived to think that it is only filled with radish because it actually has some minced meat inside it as well. If you ask me, this was lovely to savour as the pastry crumbles in your mouth. 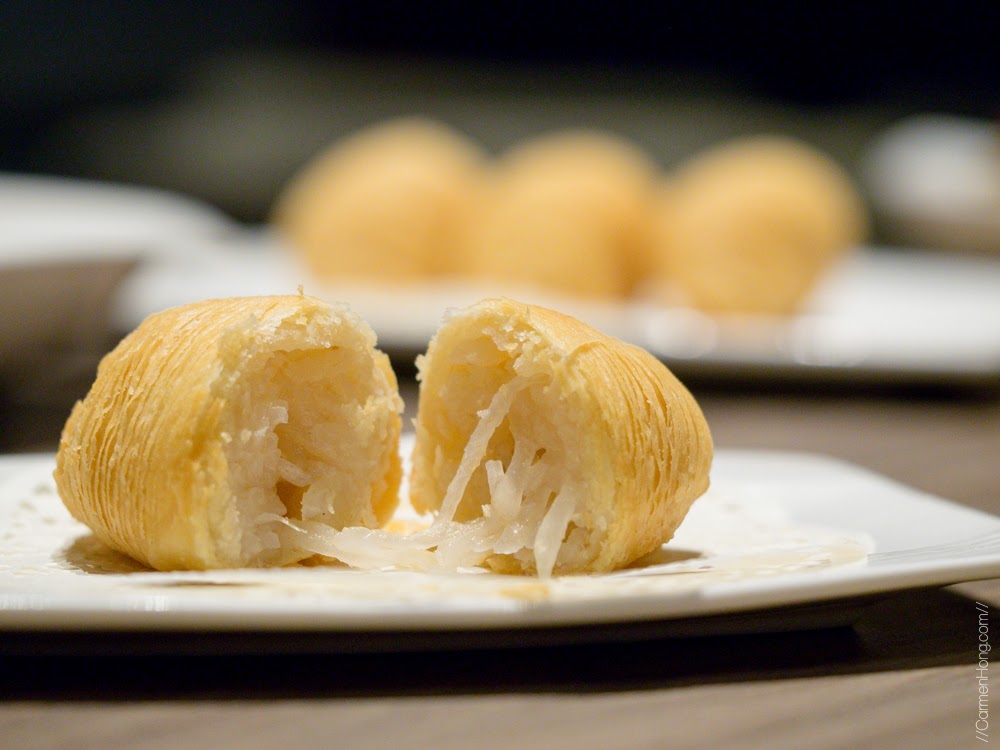 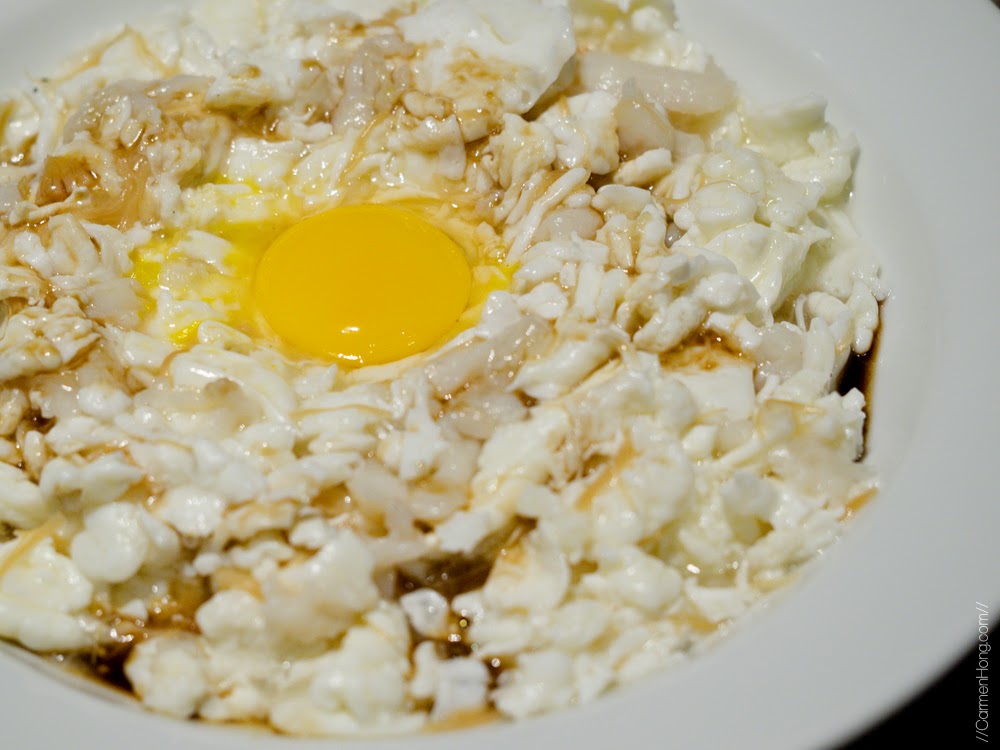 | Scrambled Egg White with Fish and Dried Scallop |
And here is another one of my favourite dish from Paradise Dynasty that I loved before this review. When my friend introduced this to me, I loved it instantly but I didn’t know the story behind it. I found out now, that this dish was created centuries ago.
Back then, the queen in China (during those dynasty period) was craving for crab and it would take days just to get crab. But she wanted to eat it now and the head chef knows that if he can’t produce the dish, he would be sentenced to death. Hence, he came up with the idea of using fish and scrambled egg white. The result, is a meat so smooth and tender that if you eat it with your eyes closed, you would think you were eating crab meat. 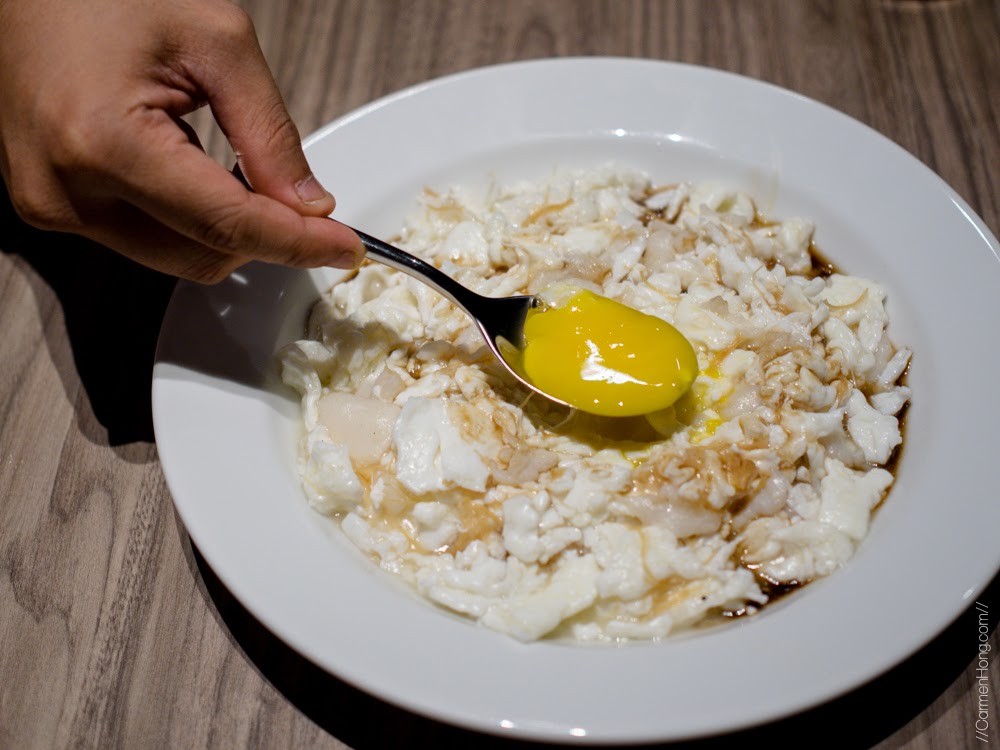 | Scrambled Egg White with Fish and Dried Scallop |
The egg yolk is to mask the fishy smell and there is actually a technique to eat this dish. You’ll need to scoop the egg yolk and pour it all over the dish gently, without stirring too much of the dish. If you do that, the dish would end up very watery. So, there is also an art of serving this dish. 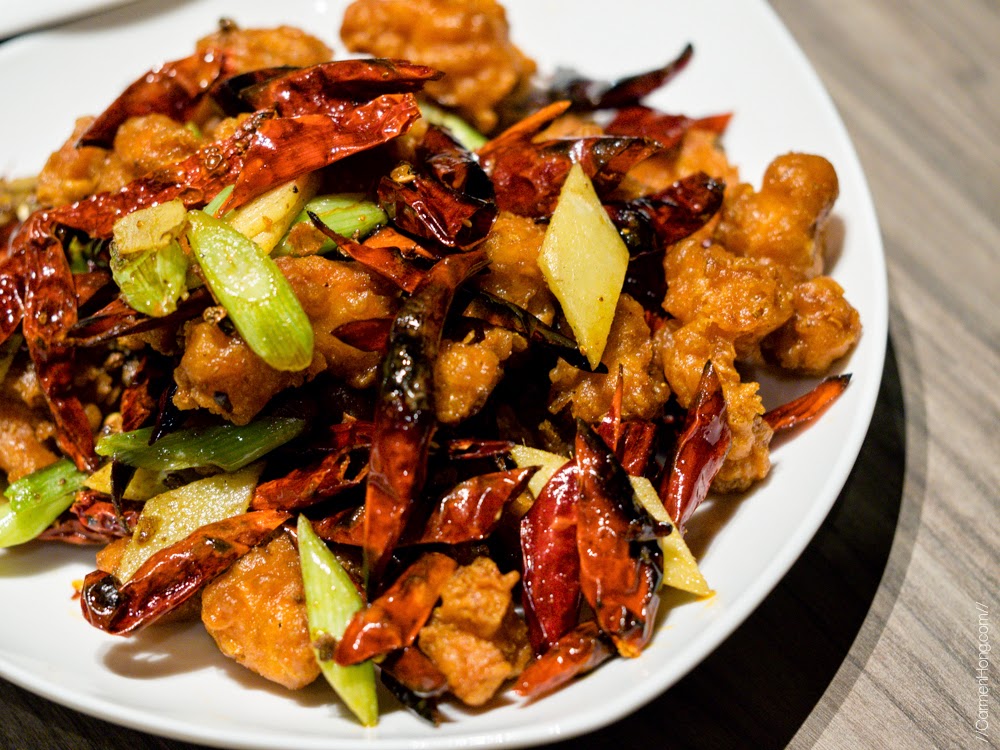 | Deep fried Diced Chicken in Szechuan Style |
Here’s another dish which looks ridiculously spicy, but thankfully looks can be rather deceiving at times. This tasted like a way better version of popcorn chicken with less batter and healthier option than those deep-fried ones. I like it, but it didn’t leave much of an impression on me.
* * * * * * * * * * 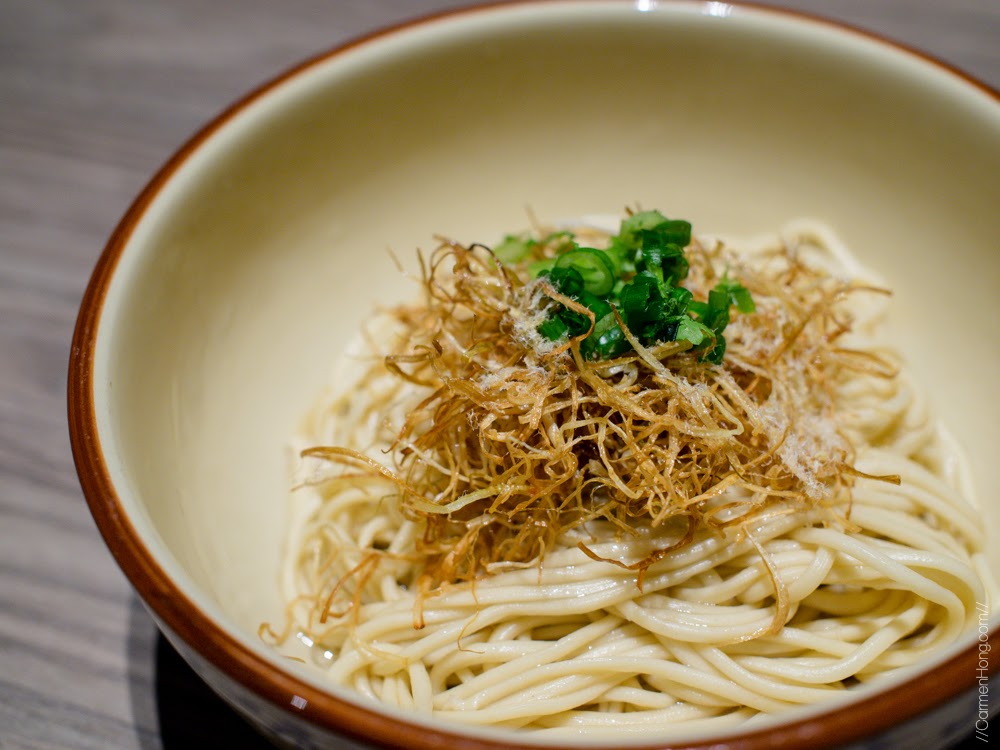 | La Mian with Dried Shrimp and Scallion with soup | 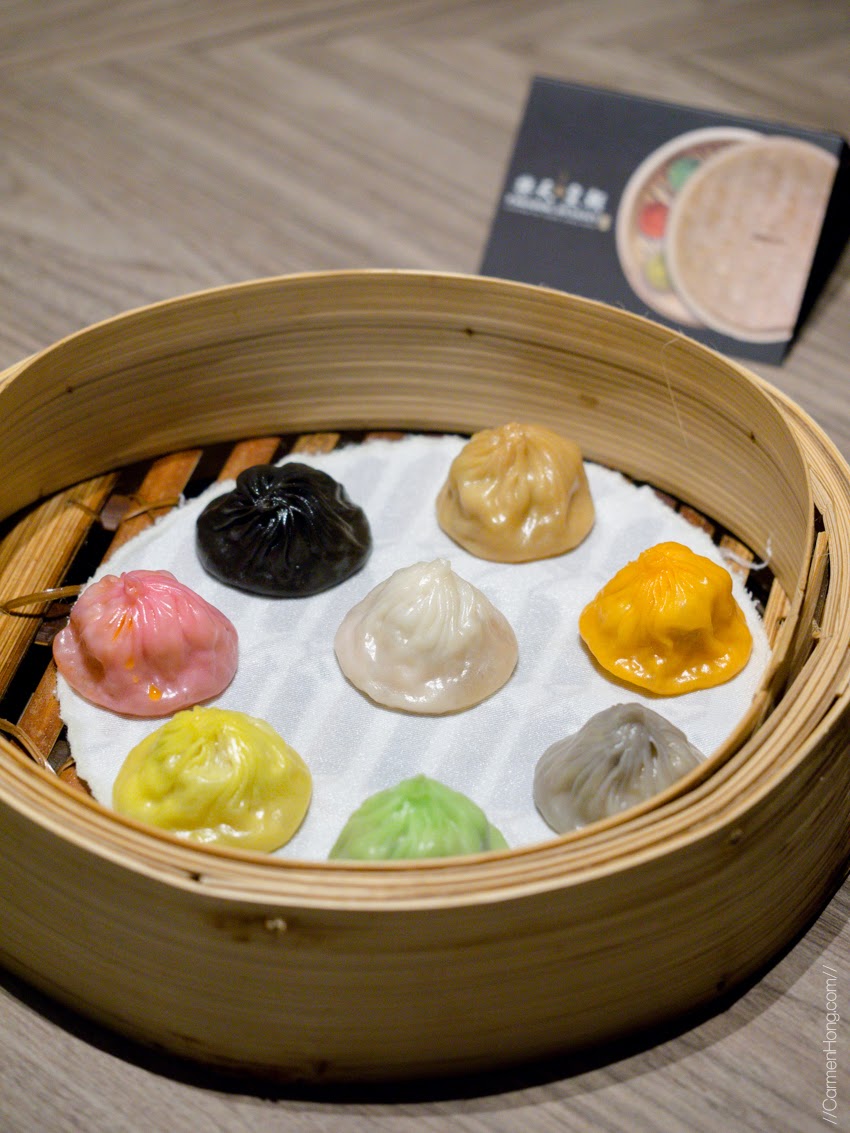 | Signature Dynasty XLB |
And then there is their signature dishes which need no further introduction. The la mian was a dry one which has been tossed with sauces and then served with dried shrimps and scallion, along with the pork bone soup. So delicious, I can have 10 bowls of it and probably eat it everyday. Then, there is the xiao long bao, with 8 different flavours! My favourites would be the black truffle and cheesy one. 🙂
* * * * * * * * * *
And with that, my post on the delicious food I had in Paradise Dynasty comes to an end. The next time if you’re craving for good Chinese food around Bangsar, you’ll know exactly where you can head to for them. You’ll find it in Paradise Dynasty located in Bangsar Village II, on the second floor.
// Paradise Dynasty //
Lot 2F-15, Level 2, Bangsar Village II, Jalan Telawi 2
03-2201 7022
Open daily from 11am to 10pm
Till next time,
xoxo
Share

Out & About: BE BRAVE’s Campaign