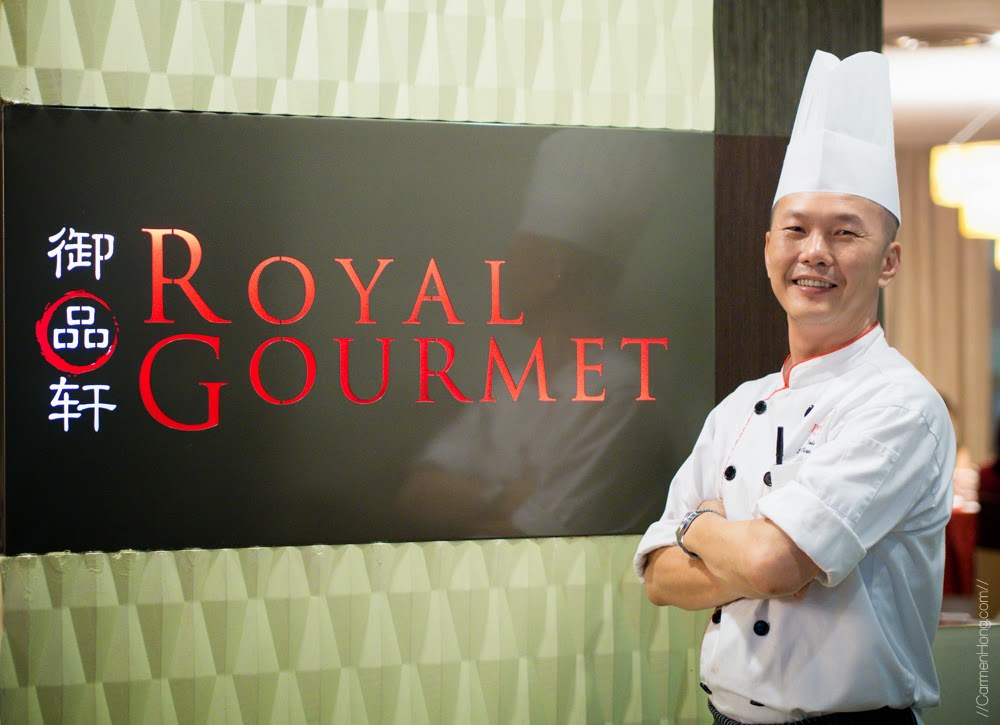 Now, it never occurred to me that I would be in Klang one day and not be eating the ever so famous authentic Bak Kut Teh from Klang itself. Instead, this time around I was in Première Hotel to sample some of the speciality dishes created by Executive Sous Chef Johnson. Frankly speaking, I had no inkling what was on the menu that night, but the chef will dish out his special dishes which he came up with. We were not even given a list of the dishes, so basically we were up for a surprise. 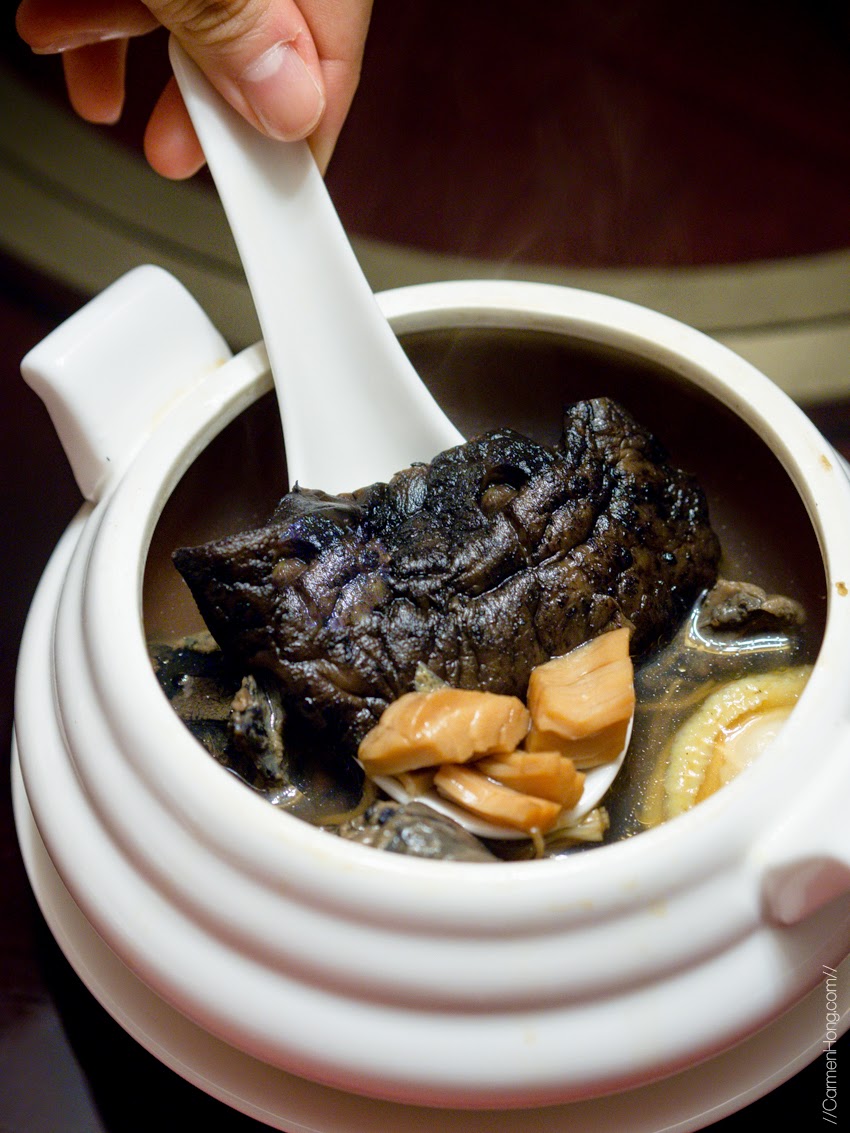 We kicked things off with a nutritious soup which seems to be laden with many ingredients I couldn’t identify. 😛 I took one look at the soup, and the next thing I did was to fish around the soup (I know my parents thought me not to play with my food, but I swear I was just trying to find a better angle). Later I found out that the soup was known as Double Boiled Black Chicken Soup with Chinese Herbs. 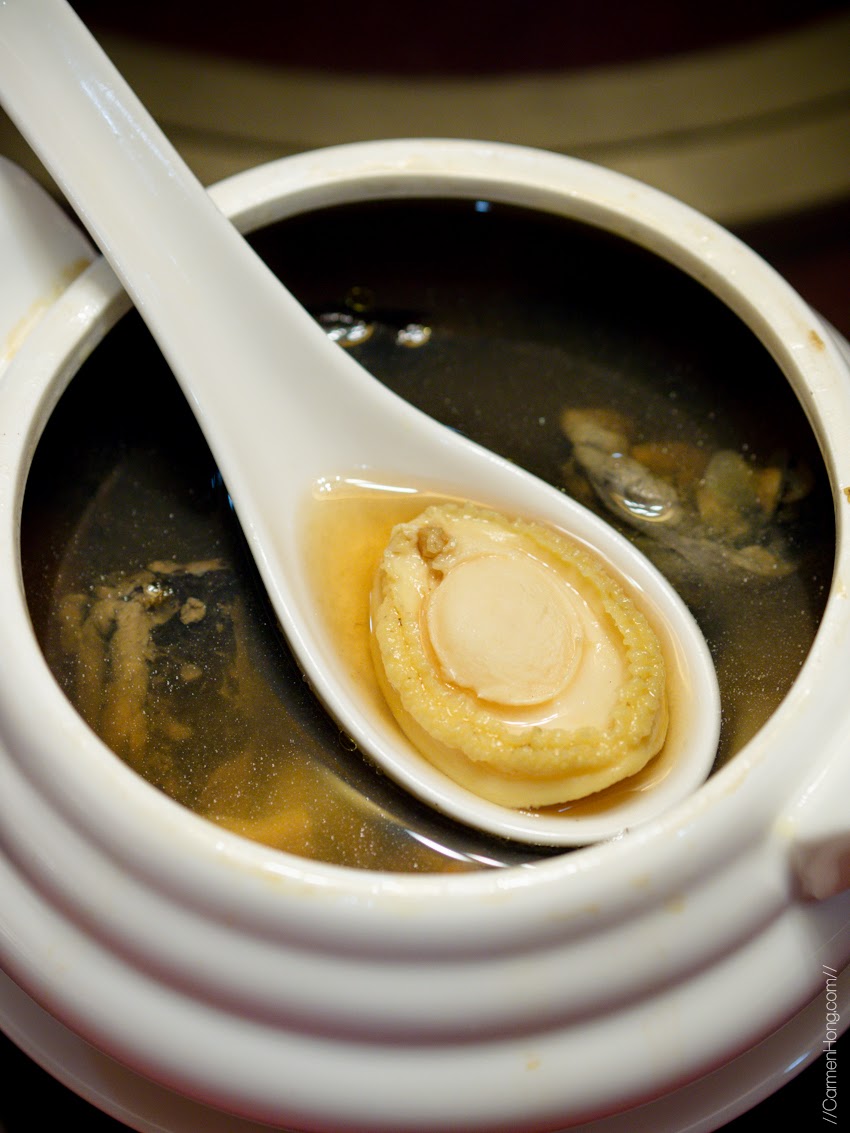 As the name suggest, the soup was double boiled in clay pot for hours long before served. The main ingredient of the soup would a mushroom look-a-like called Fresh Black Tiger Palm. It is as pictured above and is actually fungus mushroom. The soup also contains scallops and an abalone! And that’s just my favourite from the soup. 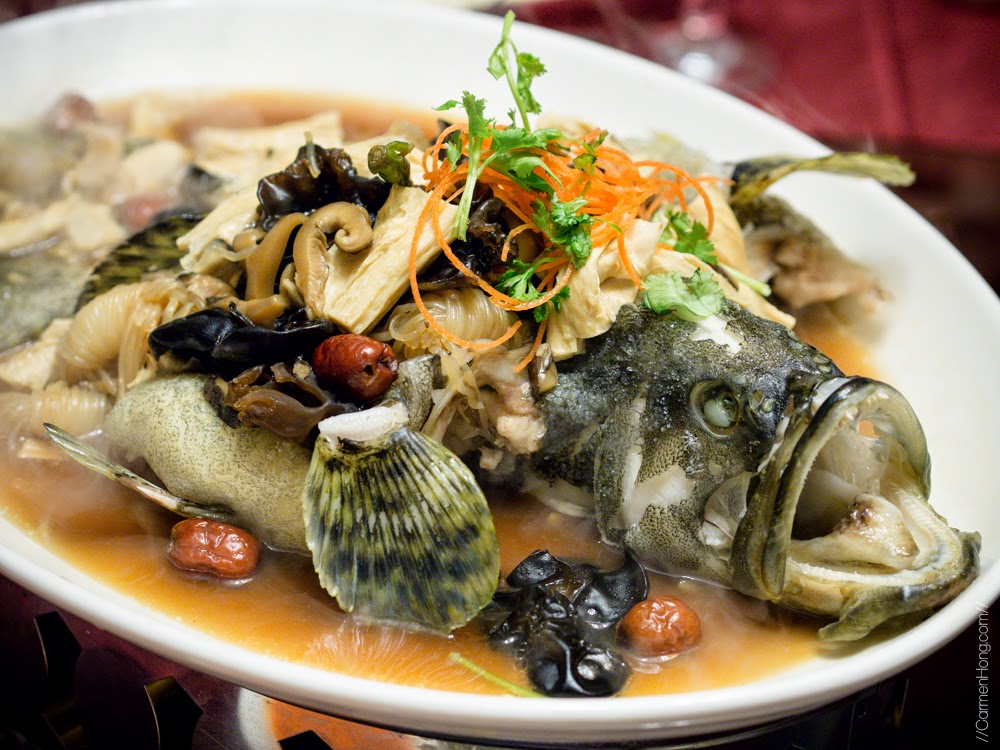 The next dish served was steamed fish (one of my favourite type of meat!) and I was half-expecting the usual soy sauce steamed type. So, when this arrived I was surprised. The fish was pretty much buried underneath ‘treasures’ , or should I say even more nutritious ingredients. It was loaded with shiitake mushroom, bean curd stick, black fungus, red dates and vegetarian glass noodle. I didn’t know this was how village style fish was cooked. While more is always good, I still prefer my fish to be cooked in a simple manner. This was good nevertheless, fish was superbly fresh, cooked in a simple broth-like sauce. 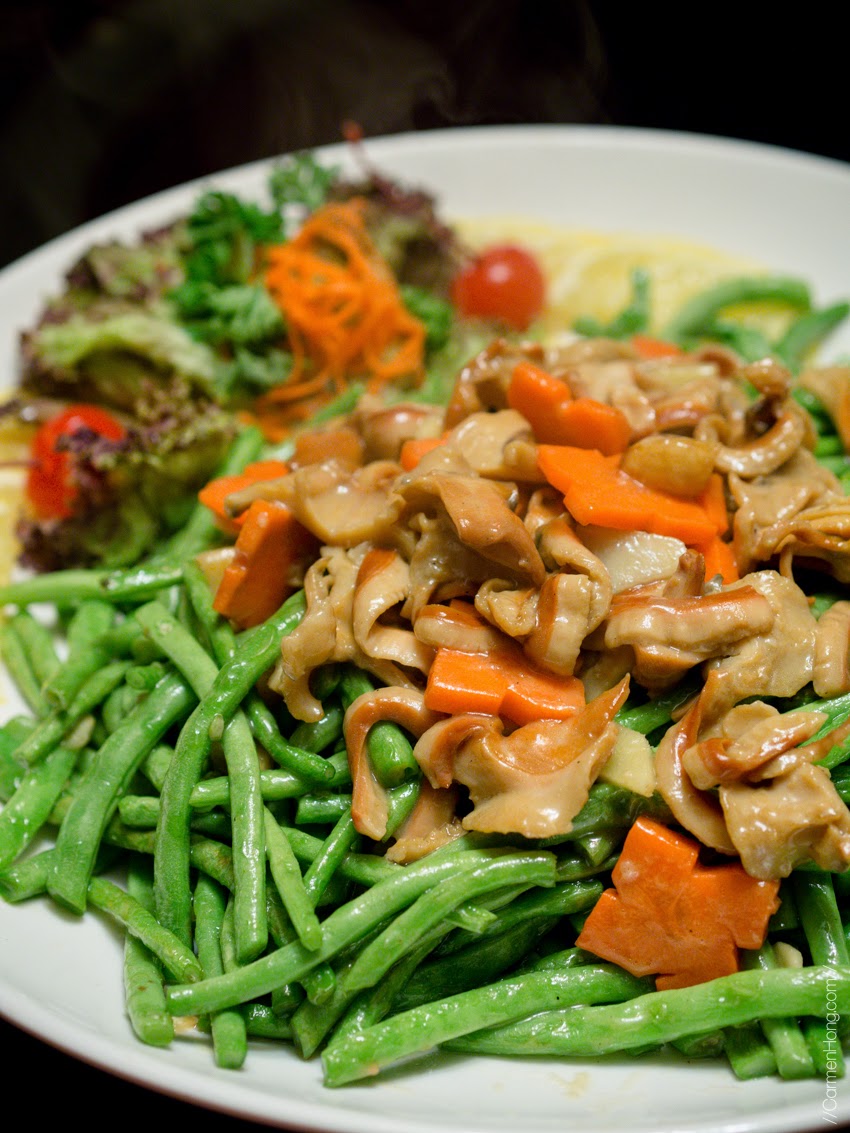 Remember when I said earlier that at the beginning of the dinner, we had no idea what was on the menu? Well, when this arrived we knew it was stir fried French beans but what we didn’t know was the orangey bits of meat. We were thinking maybe cuttlefish, but doesn’t quite look like that. Then Chef Johnson, told us it was actually snails! 0.0 More accurately, it was top shell snails which if you haven’t tried before, is darn awesome. It was chewy and mhmm, so good. This was cooked with baby French beans  from Cameron Highlands, so it’s crunchy and fresh too. The combination with the top shell snails work wonders. 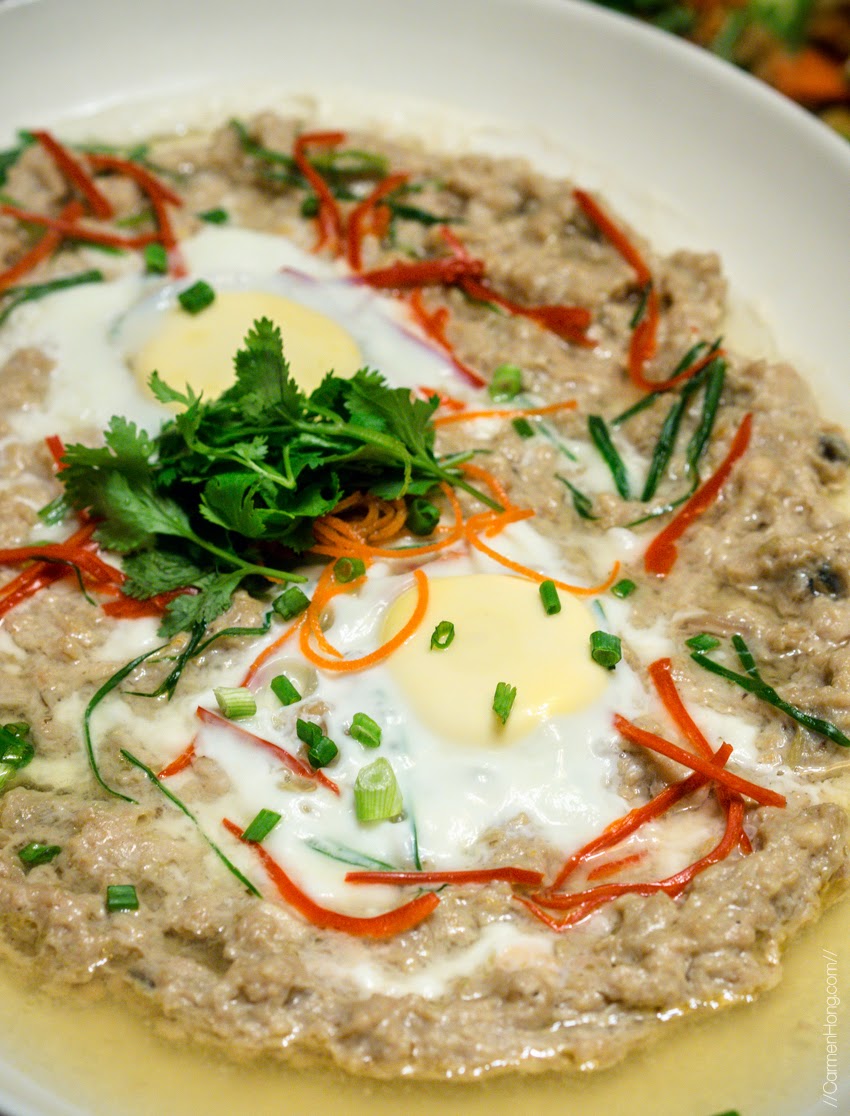 | Steamed Minced Chicken with Salted Fish |
The steamed minced dish was something my mom cooks for me at home, and a dish that I came to love albeit it being a rather simple one. To have this served in restaurant, was different, especially in a Chinese restaurant of a hotel. But Chef Johnson’s take on the simple dish was amazing. First, he used chicken which was minced till it’s tender but not mushy instead of pork. I really couldn’t tell the difference because texture wise it was similar to the pork ones. And, he used my all-time favourite food to spruce up the dish, eggs! It is such a genius idea. 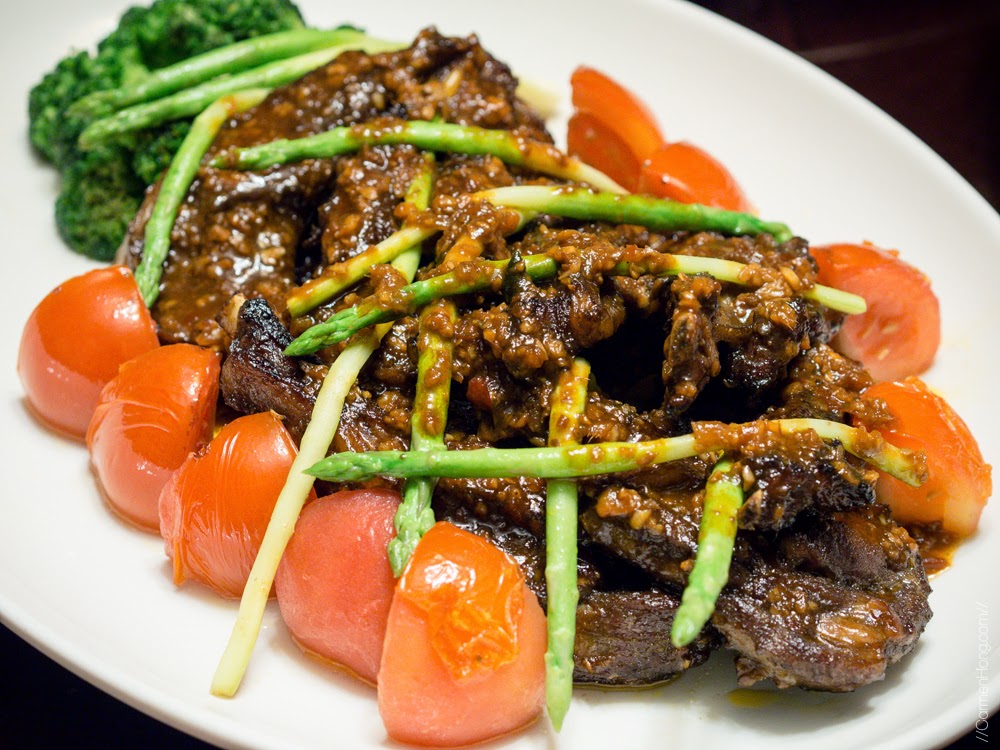 | Baked Lamb Rack with Chef Special Sauce |
We were then served with an awesome platter of huge chunky lamb racks (did I just one too many adjectives in a sentence?), which looks glorious. According to Chef Johnson, it is an original recipe that he had came up with whereby the method used to prepare the racks was unique. He used Chinese and Western ingredients which includes Chef’s special sauce, garlic and shallots. The lamb was marinated for 2 hours and was then oven baked and topped with savoury sauce of ginger, shallots, garlic and fermented bean paste. And in the end, we have a perfectly roasted lamb racks infused with Chef’s special sauce and a hint of fermented bean paste. I may not be a fan of these two, but it was definitely a unique combination. 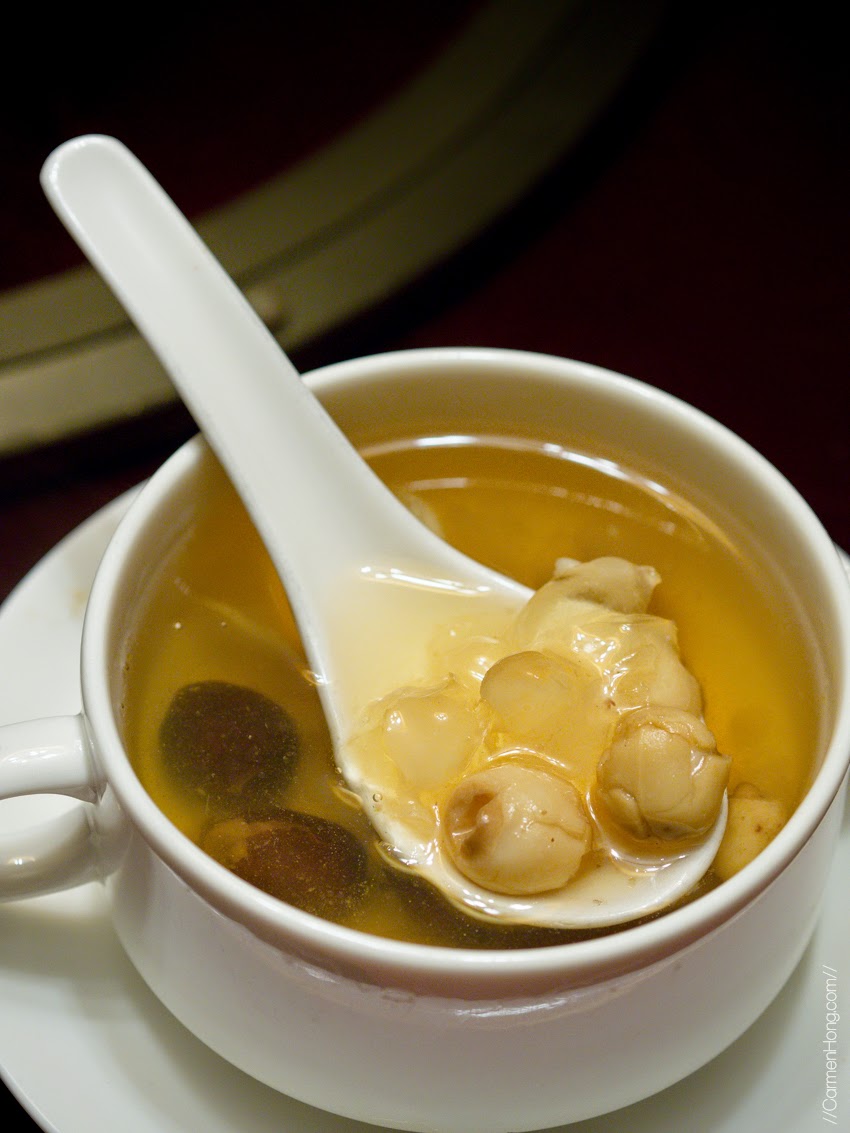 We ended the dinner with a hot dessert, this looks seemingly similar to the ones we usually had at the end of the Chinese wedding dinner. I can’t seem to recall what they were called at the moment. But this was different because it was definitely sweeter, with the note of sweetness coming from the dates and the jelly like stuff. When asked what the jelly was, it was actually wild snow lotus. It is very likely something from the wild snow lotus plant. (The chef was explaining in Chinese and I’m a certified banana, so this was the best I can do.)
Overall, the culinary experience here in Royal Gourmet had me surprised for more than a couple dishes. I would say in all, the dishes were of a odd combination but if you see them individually, they were rather unique and amazing. According to the General Manager of the restaurant, they were considering into making in to MIGF this year. Here’s to seeing them in MIGF this year! 🙂
Share

Out & About: Astro on the Go’s Campus Roadshows