Like fashion, there are trends for just about anything else. It was trendy to get an iPhone when it was first launched some years back. Of course, now Samsung spawns devices every few months. It’s getting hard to catch up, you know. Just like how there are so many burgers joint mushrooming faster than I can say “Buuuurgers”.

Honestly, I have lost count. The first I know was myBurgerLab, thanks to a friend who was very fond of them. Next thing I know, there are places like Burger Junkyard, Burgertory… you get what I mean. And now, will you be glad to know that they is another burger place called Smashies? The peeps in Setapak would probably be, considering the other burgers places are in PJ. 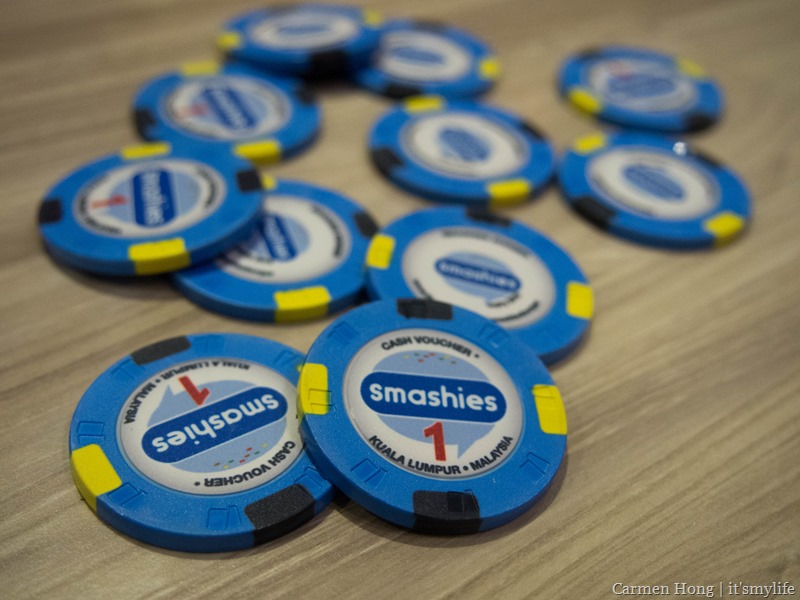 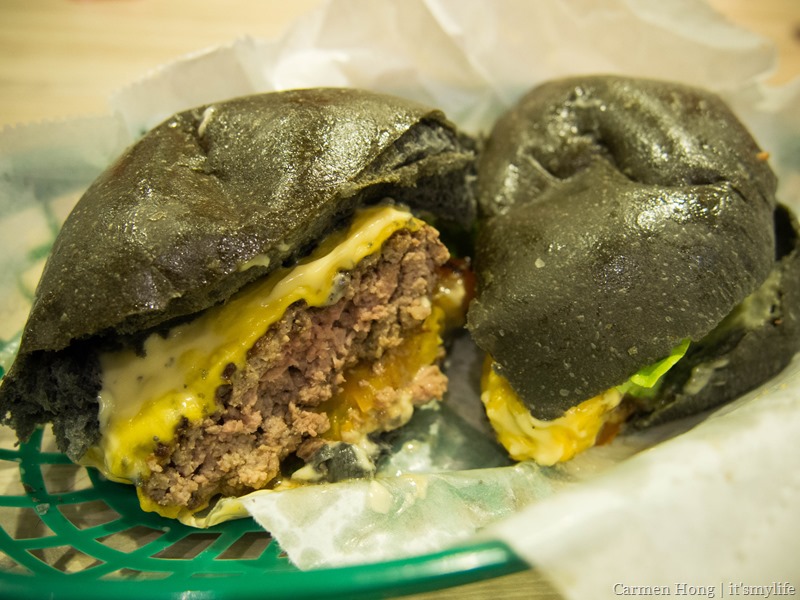 I Am Single, RM11 | Black bun, single beef patty and cheese (veggies too).

This was my first bite from Smashies Burger, i.e the one that sets the first impression for me. I like the beef patty, it was juicy and chewable soft. As the name of the restaurant would suggest, this burger joint ‘smashes’ their patty to cook them, hence Smashies. From what I understand, there is a technique to smash cook these patty. Leave them too long, they would be too dry. But these patties I had here, were juicy, nice and fresh. 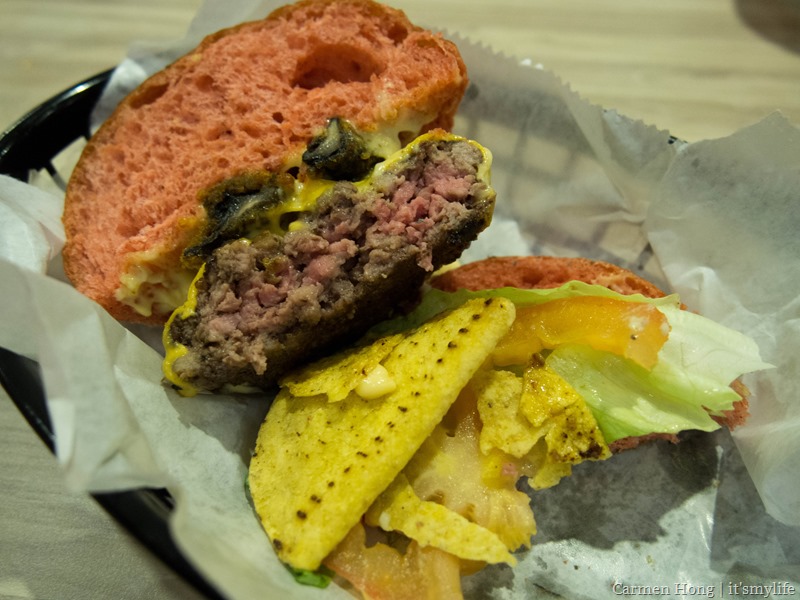 This was something different with nachos, but because the burger was so huge it was difficult to eat them all together that I ended up eating them bits by bits. As usual, I loved the patty. I wished they had more portobello mushrooms for this, though. 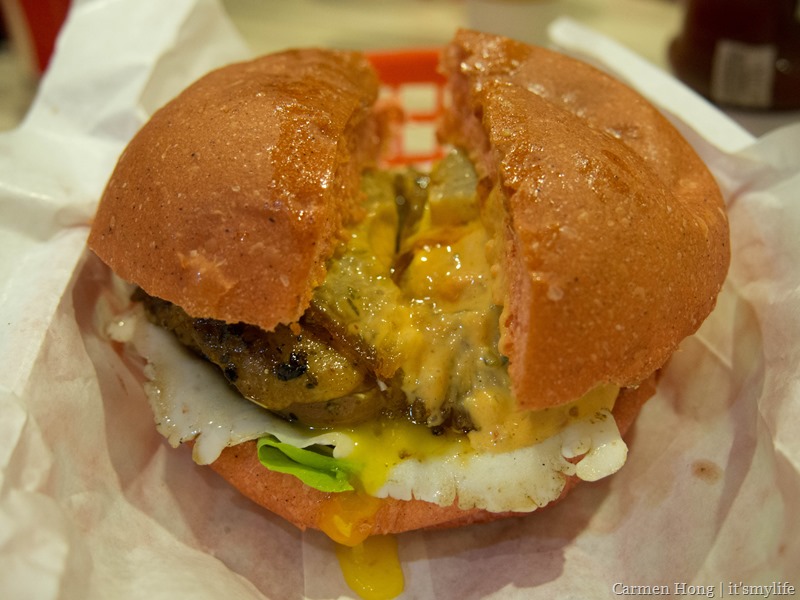 This is one hot gooey juicy goodness, I can’t get enough of. I had no idea there were pineapples in them, until I took a bite and then, the sweet pineapple taste coupled with the tangy hot sauce… ahhh, so good. It is very very messy, use all ten fingers to fully enjoy the experience. Haha. Chicken patty was okay, nothing fantastic. 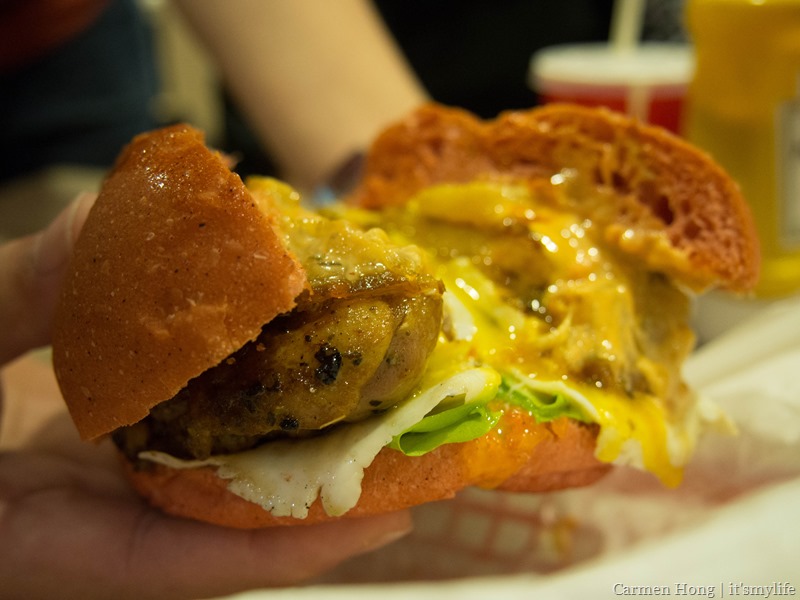 Hot Chicks, RM14 | Another picture because it’s too delish! You can see the golden juicy goodness here. Trust me, it’s not too sauce-y. 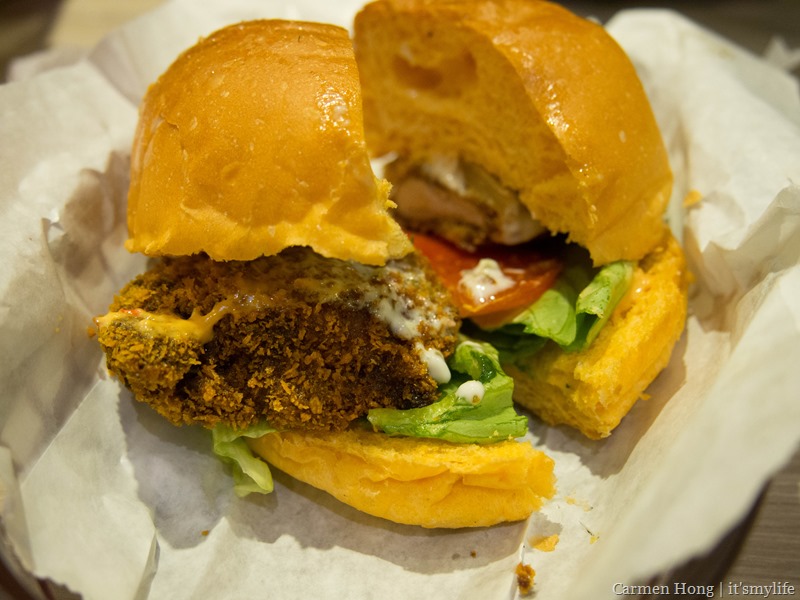 I didn’t try this because I personally am not a fan of fried chicken patty. 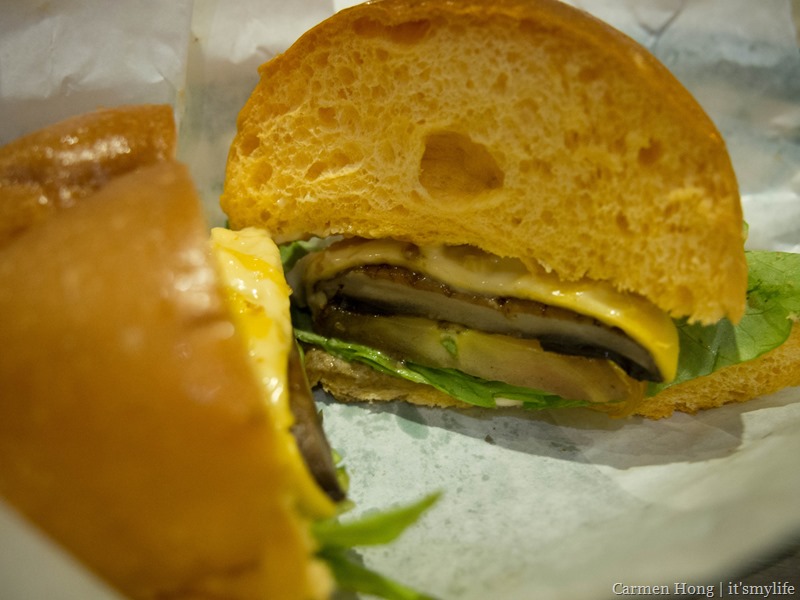 The buns for these were really soft, it almost felt like sponge cake. Especially since it was the orange flavoured ones. The mushrooms were good, but I’d still pick patties over this. If you’re a vegetarian though, this is quite nice and something different. 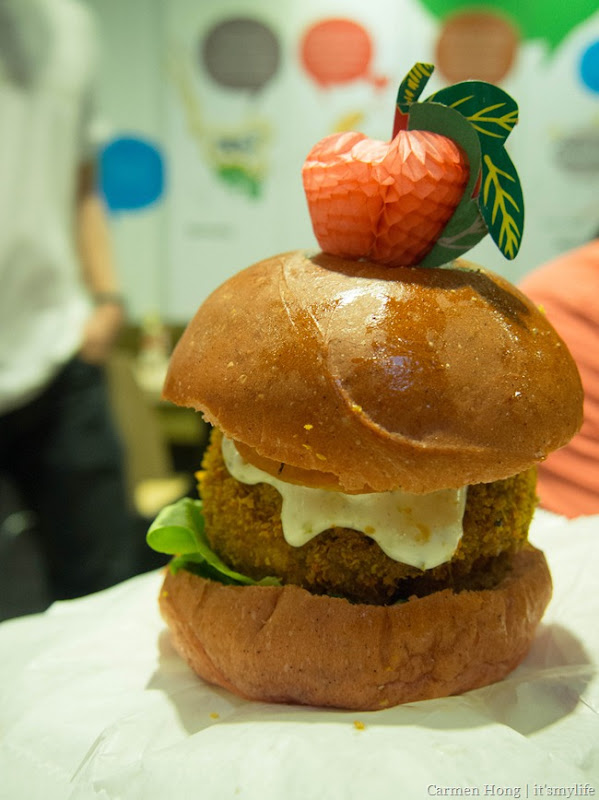 This was so so freaking mega huge. Like really huge I cannot imagine even eating it. Haha. I didn’t try this, but cheese lovers should. It has no meat, vegetarian since it is just mushrooms and loads of cheese. Some commented that the batter masked some of the taste of the cheesy mushrooms. Shroom Bomb, RM17 | It is oozing with cheese, overloaded with them! 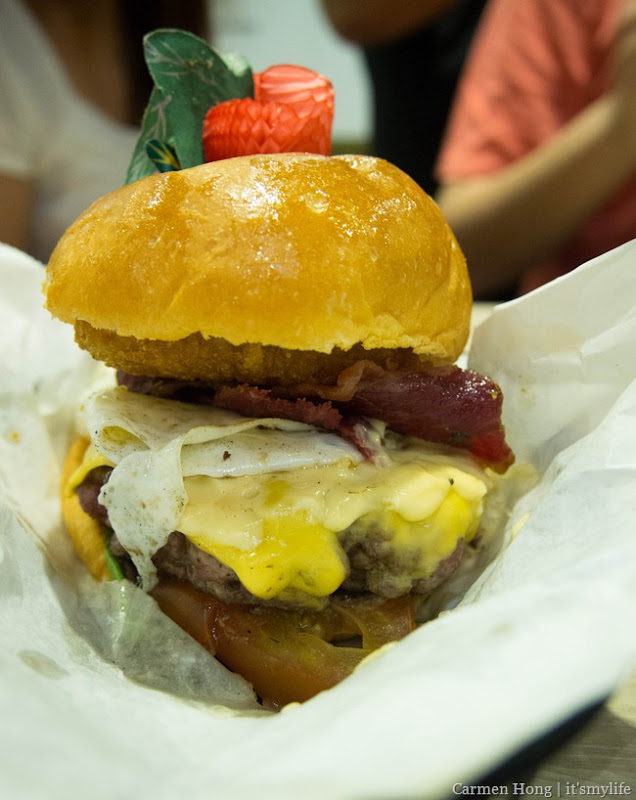 I didn’t get to try this, but it does look really good. I mean it has bacon, patty, egg and hash brown all in one burger! Can it anymore perfect than that? I will probably hop by there again and will try this the next time. 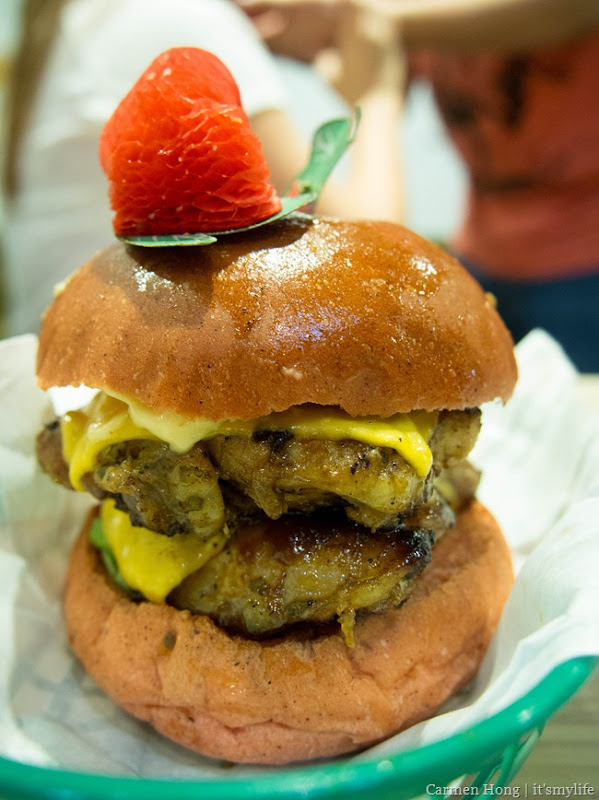 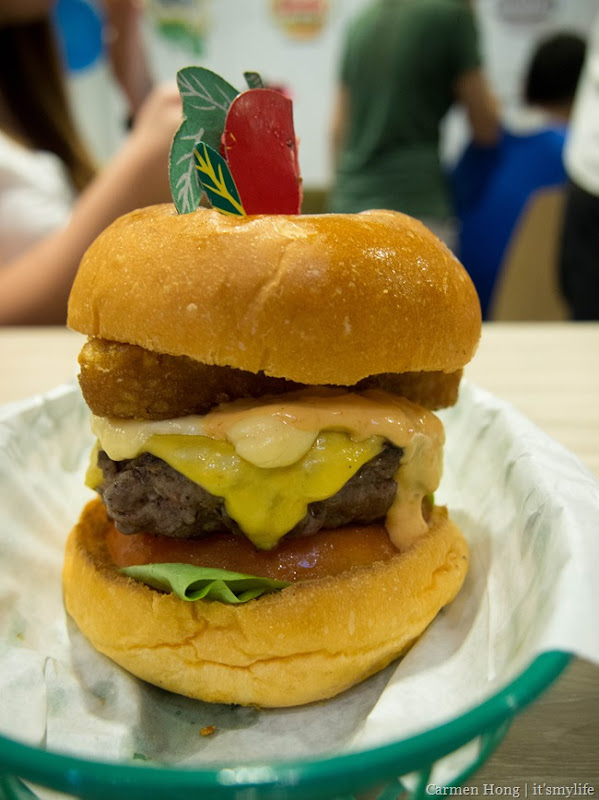 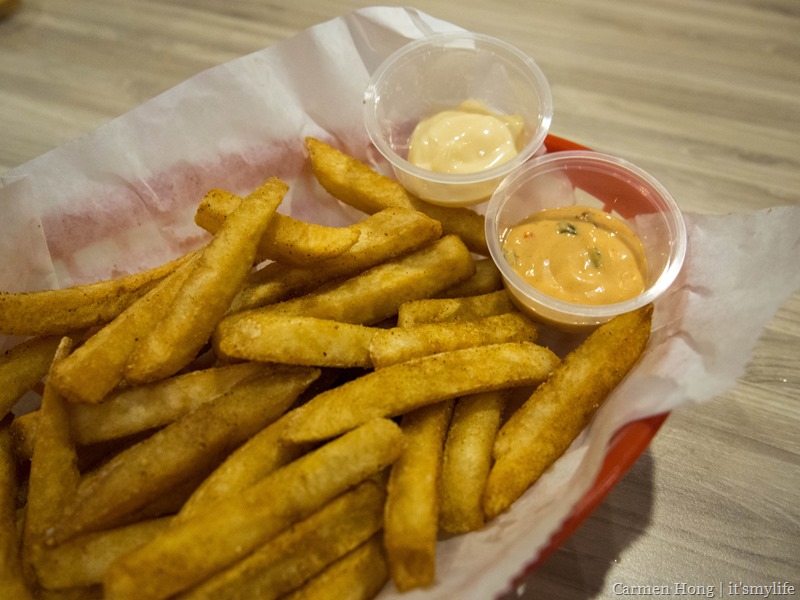 I didn’t like the fries one bit, it wasn’t fluffy or soft. It was bit hard and just plain salty. The sauces were also just mediocre. I don’t think it complemented well.

Onion Rings, RM7 | Served with the same sauces as the fries.

Never fancied onion rings and after having these, I still don’t. So, you can say it was just okay. It’s onion rings, not that mind blowing of a food if you ask me.

This burger joint may just be another burger place, with a couple hits and misses but it would still be worth a shot. Especially for burgers like Hot Chick. That is probably one burger I would actually have cravings for, because it is that good. 🙂