I only ever heard of all the amazing food abroad, and up to date, I have yet to try many foreign countries delicacies. I’m keeping my fingers crossed that hopefully next year onwards, I’ll be travelling elsewhere to eat and photograph it! But, while I’m still here in Kuala Lumpur, I can strike Macau Pork Bun off my list of food to eat! This delicious porky buns can be found in none other than Tai Lei Loi Kei.
The restaurant which is similarly modelled after a fast food franchise, where it is self service and you place your order over the counter. You will conveniently find the complete menu in a board close to the ceiling, like many other fast food chain. And just like a fast food chain, they have various outlet locations as well. At the moment of publishing, they have a total of 17 outlets in KL alone and they are looking into expanding into other states. You can find the complete list here.
* * * * * * * * * * 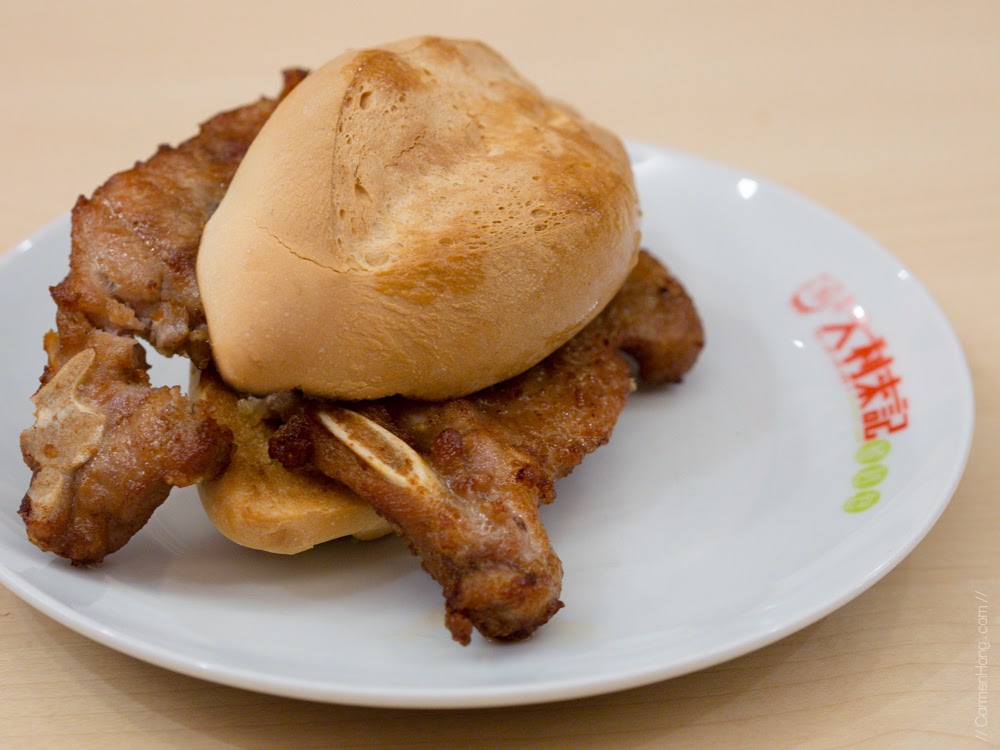 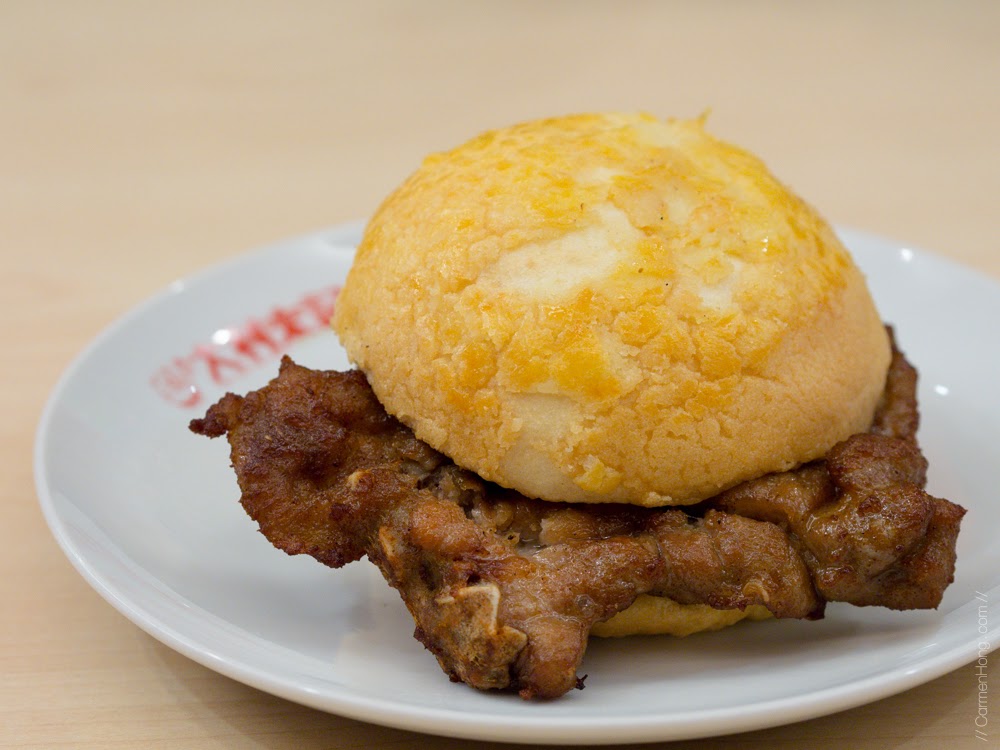 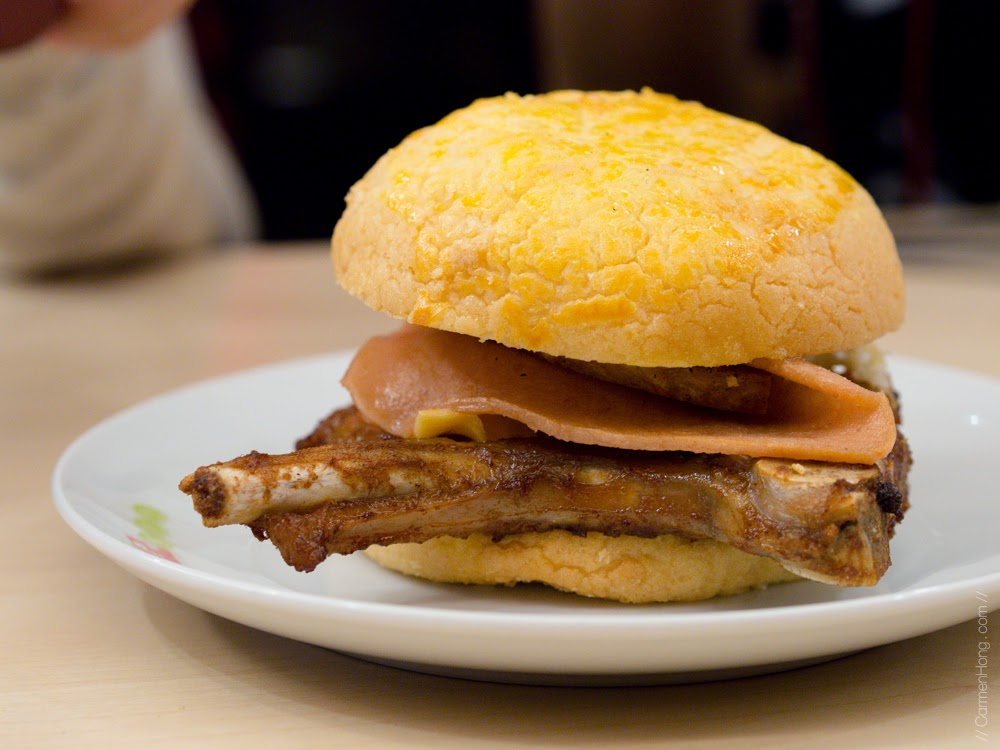 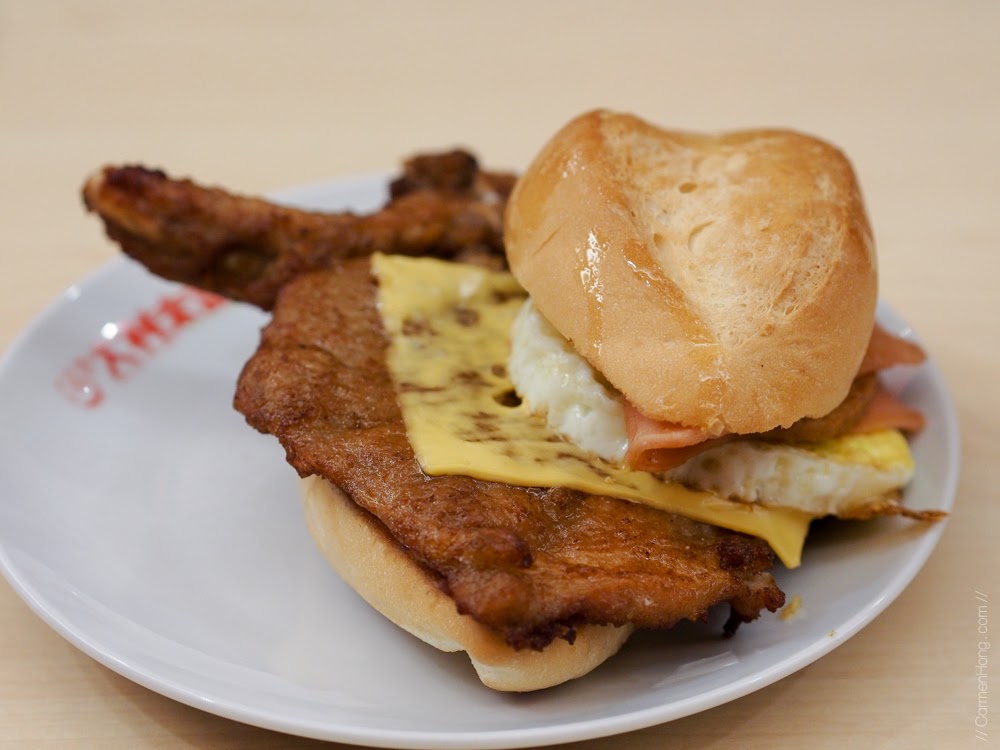 Signature Pork Chop Bun with Egg, Ham, Luncheon Meat & Cheese | RM20 (approximately)
I knew I’ll be eating pork buns but what I didn’t expect was to have a whole slab of pork chop snadwiched in between my buns. It had a different feel to eat pork chop this way, I tried to eat it first all together like how you’ll eat a burger, and the next time, I ate it separately. Not because it was tastier the second way, but because I wanted to try just the pork chop on its own. And with that, I can tell you just how amazing their pork chops are. I have eaten other types of pork chops before, but this was very well marinated and even though there is no accompanying sauce, the meat itself was tender and juicy. YUMS.
There are two options for the bun; signature bun or Polo bun (pineapple). I would say the Polo bun appeals more to me because I have in my lifetime, always always wanted to try these pineapple buns  but I never been to Hong Kong/Macau and I don’t know where to find it here. Even though the Polo bun is sweet and the pork chop is salty, I found the combination savoury and rather lovely. 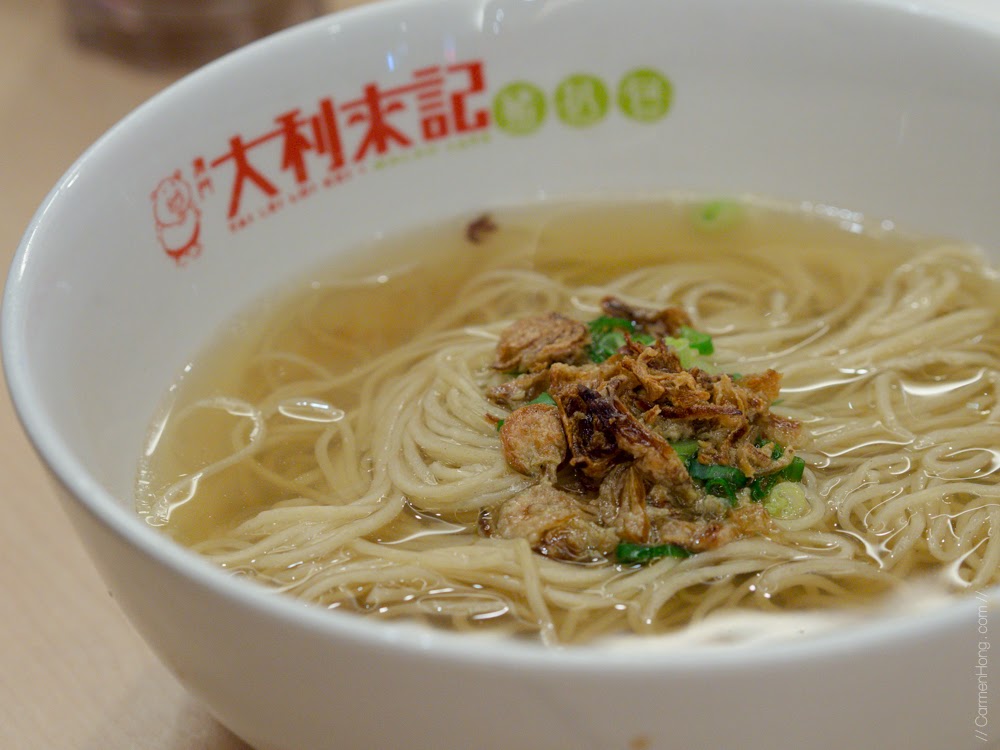 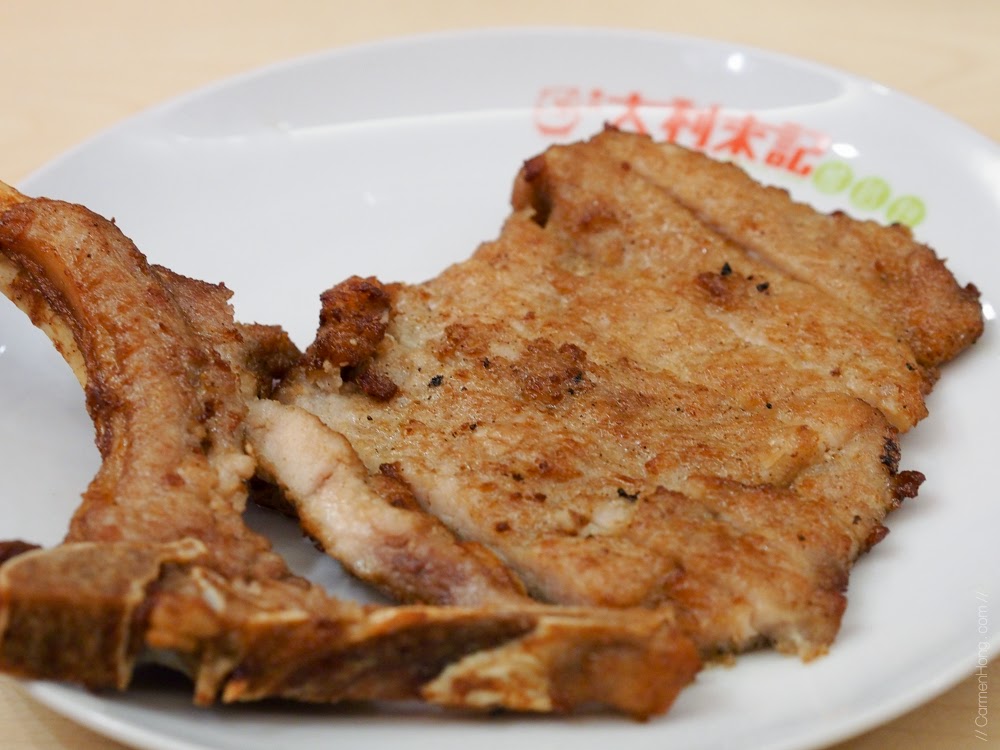 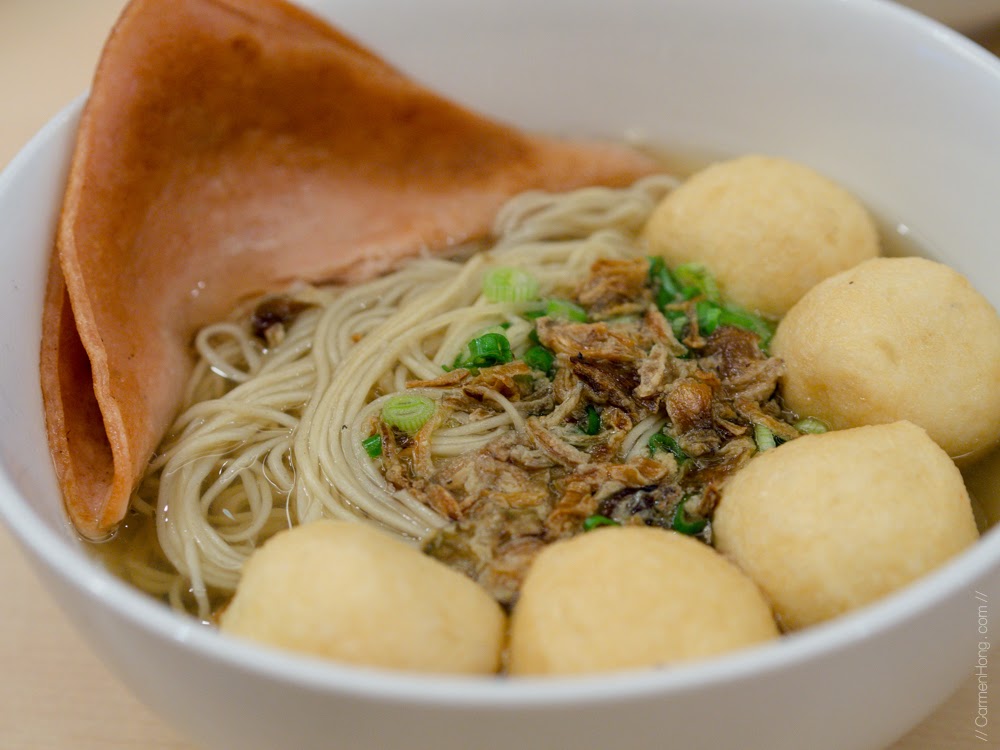 Fish Ball Soup Noodles | RM12.90
These noodles here, look pretty similar to ‘wan tan’ noodles, but do not be mistaken because there’s noodles are actually purely made from duck’s egg. As such, the texture of the noodles is also very much different than the ‘wan tan’ noodles. It’s more springy and it also doesn’t become soggy too easily. The soup base for both the Pork Chop Soup Noodles and Fish Ball Soup Noodles is the same, which is made from anchovies. It was a deliciously simple broth which I can eat it simply, just like that. 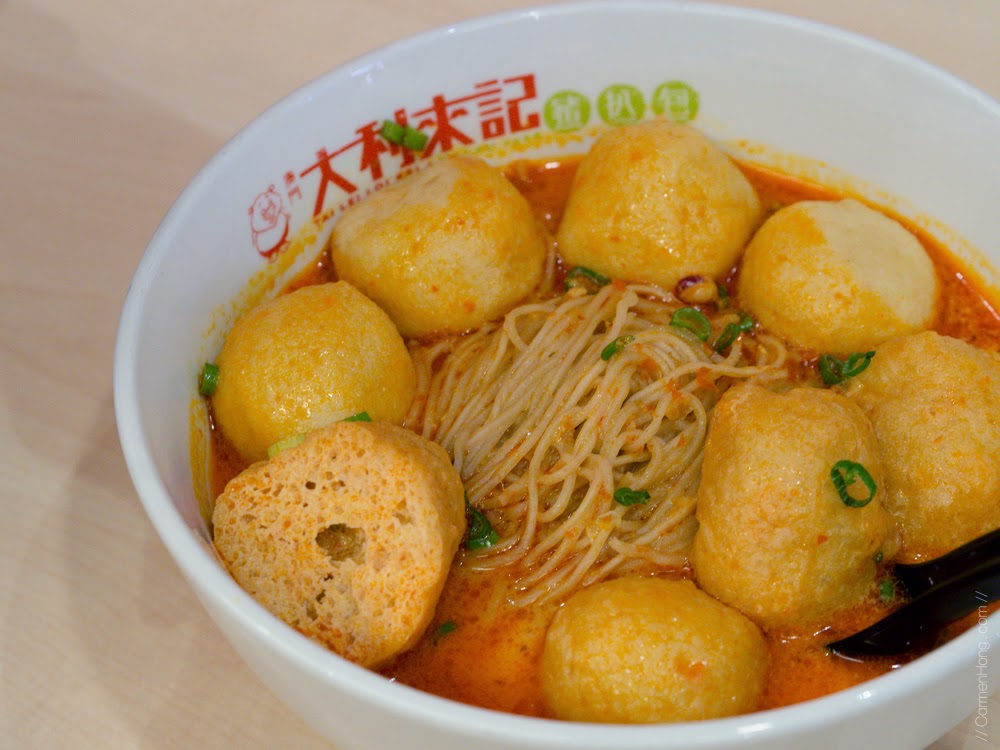 Fish Ball Curry Noodles | RM8.50
Similar to the noodles above, the same noodles and fish ball are used to cook the Fish Ball Curry Noodles. The difference is that this is a curry soup, which was unlike the typical curries one you’ll find outside. This one had santan in it but it was still light, not too overwhelming. It reminded me of nyonya laksa, so you can roughly imagine how much lighter the soup is compared to thicker curry soups. 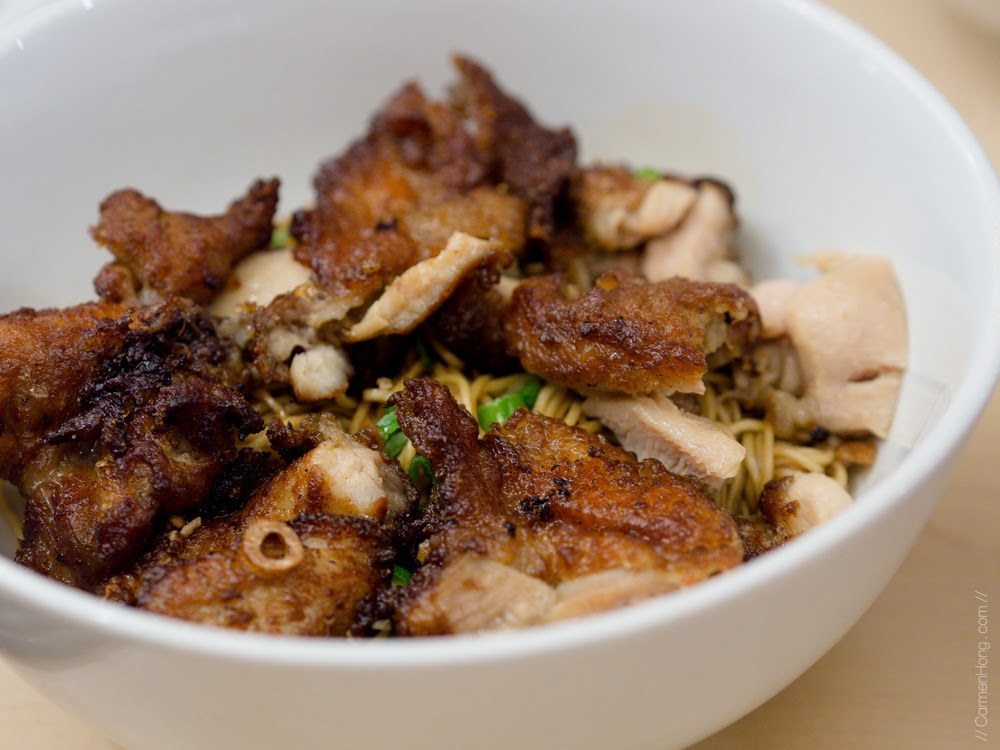 Chicken Chop Bouncing Noodles | RM12.90
Like the Pork Chop, I found the Chicken Chop rather well marinated as well. This I found out was due to a special machine used to marinate their meats, which will ensure that the meat is fully marinated. And best part of this, was that the marination was done just perfect. Not too salty, but just nice. 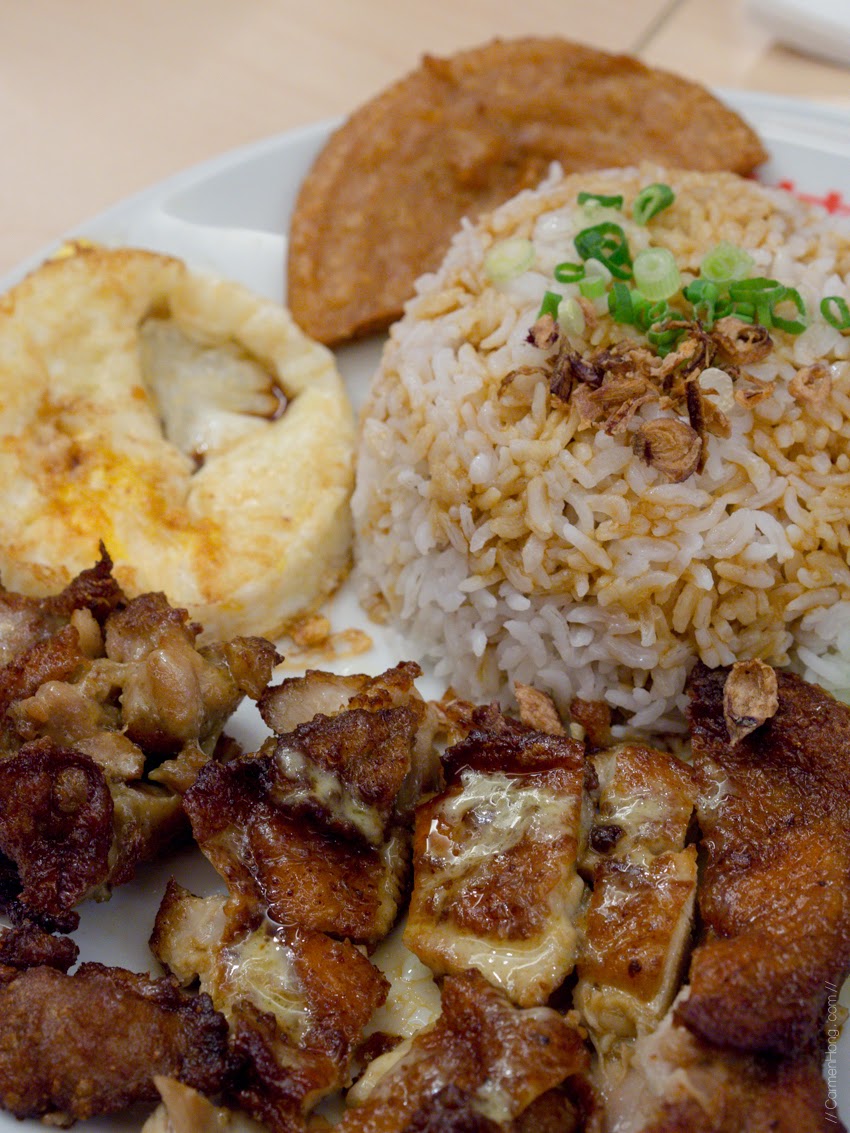 Supreme Chicken Chop Rice with Egg | RM12.90
Yeap, the chicken chop used in Chicken Chop Bouncing Noodles is the same as Supreme Chicken Chop Rice with Egg, except that in the rice version there are sinfully delicious buttery sauce poured over the chicken chop. Yumms. Other than that, the rice is also drizzled with a special dark sauce. To be honest, I would prefer to drizzle or pour my own sauce myself rather to have it done and served to me. But, that is a request you can ask from the kitchen or when you’re placing your order to have your sauce separated. 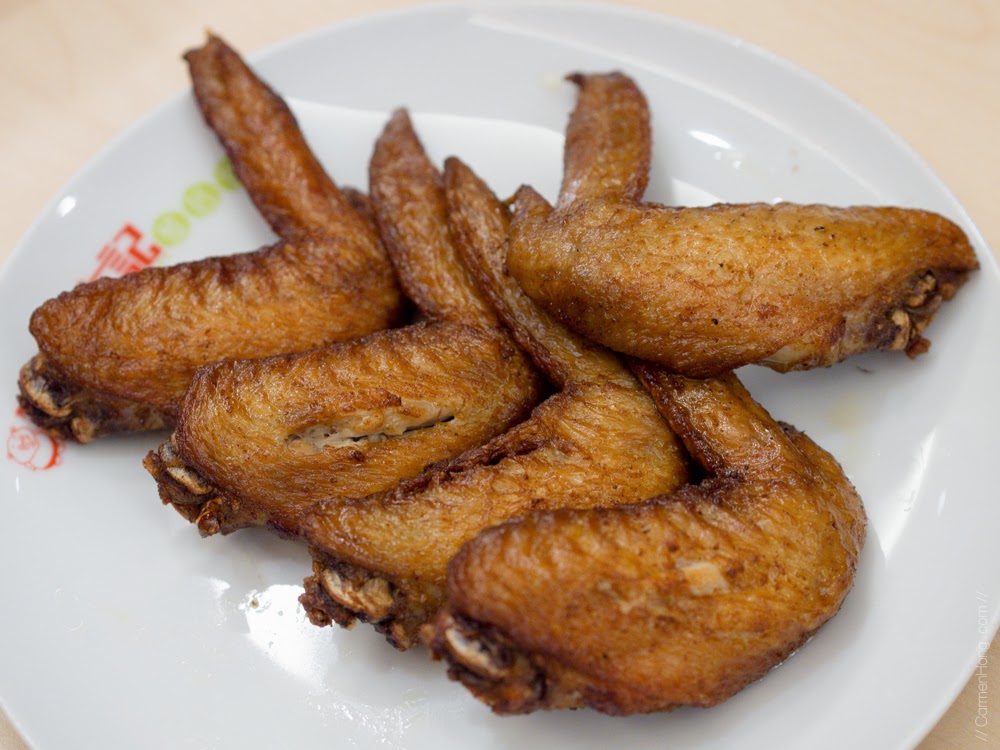 Macau Chicken Wings | RM9.90
Other the main dishes, Tai Lei Loi Kei also has snacks like the Macau Chicken Wings and Macau Curry Fish Ball. I have an absolutely soft spot for chicken wings, so I’m bias towards any chicken wings. I will say the same applies from the ones from Tai Lei Loi Kei. I like it, I could probably finish the whole plate here and ask for more. But I can’t say the same for the Macau Curry Fish Ball, the curry was too powderful for my liking. I hope you got the pun, because I meant to say the curry was all powdery and nothing smooth as all with the gravy. 🙁 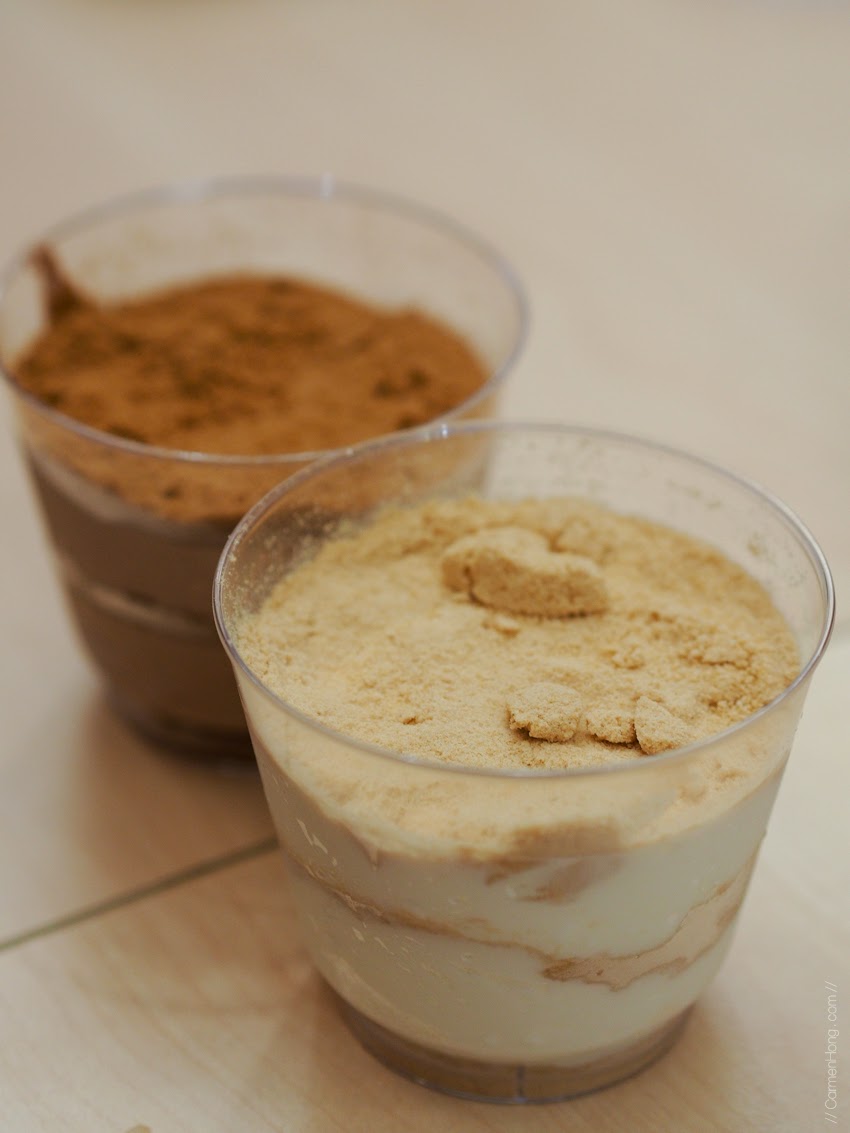 Sawdust Cake (Chocolate/Original) | RM5.50
If you ask me, I would have wanted to try this dessert in a heartbeat, just because of the name. It’s rather cute to name a food over something that you technically can’t eat, but looks so 100% similar to what the name suggests. Of course, it’s a relief to know that it’s not actually sawdust I am eating but really fine biscuits crumbs. I like the original version more, because the texture was bit harder than the other chocolaty mousse. And the best part is the original flavour which is just made from milk, feels more like cheese. Like soft cheesecake, but the manager insists that it’s just milk!
* * * * * * * * * *
&. Thanks to NomsterAds and Tai Lei Loi Kei (Taipan branch) for having me. +
Share