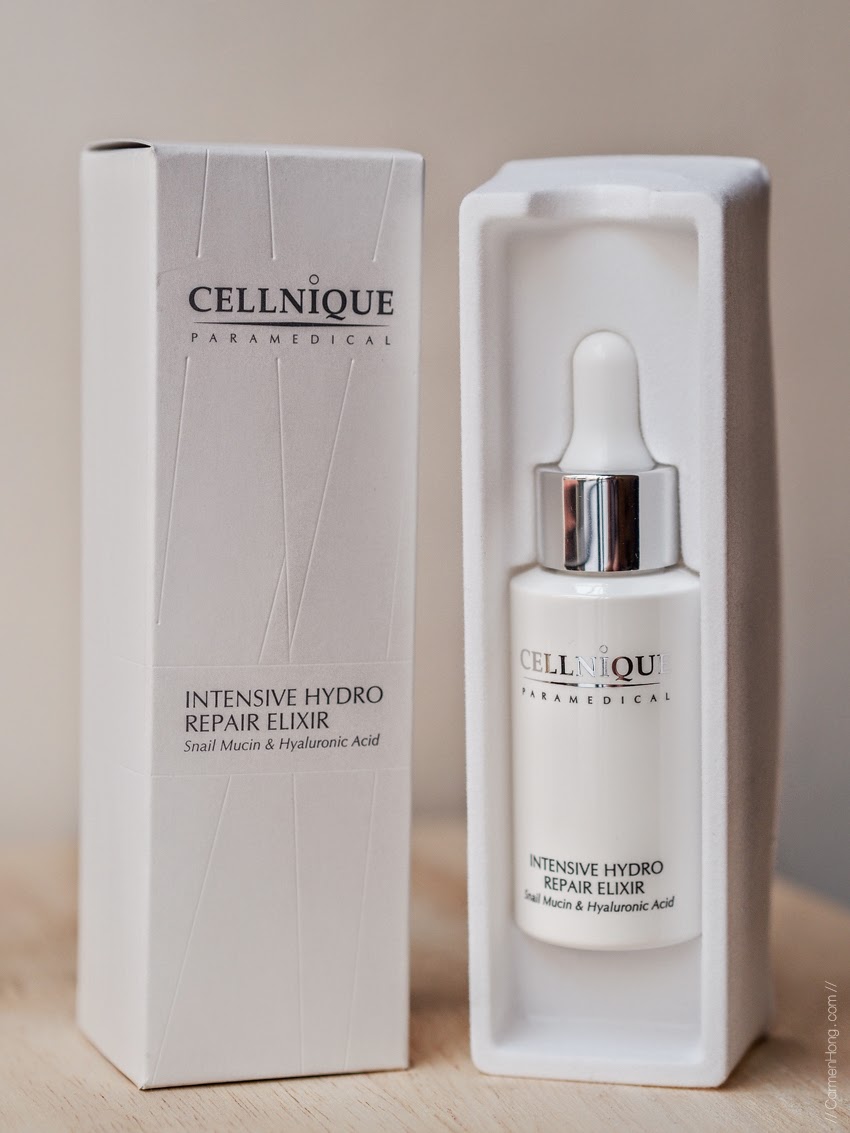 Intensive Hydro Repair Elixir, 30ml | RM199
Hola! I have been pretty busy with work lately, working till the AM and then doing it again. Well, it’s pretty much the busy time for my line of profession and that explains why my updates have been sporadic. This time around, I’m taking some time off to write a review on Intensive Hydro Repair Elixir by Cellnique. I’m not sure if I mentioned it before, but I have a rather strict beauty regime that I stick to. I have a couple of cleansers, just one moisturiser and one type of sunblock that I use. And I swear by this regime, because it is perfect for me. It is rare that I would add or substitute another beauty product into my regime. Intensive Hydro Repair Elixir, 30ml | RM199
But when I first heard about the Intensive Hydro Repair Elixir, I found out that it contained an ingredient that I came to learn about years ago but till today I never did try. It was the Snail Mucin. If you don’t actually know what it is, it’s snail slime! Yes, you may say eww! But here’s the thing, I have heard how miraculously they were and I have always wanted to try the creams/masks, but I never got around to it.
So now, you know why I decided to give Cellnique’s Intensive Hydro Repair Elixir a try. How did it fare? For this product, I decided to substitute it with my moisturiser. Instead of using my usual moisturiser, I used this instead. I have been using it for three weeks already now, so I’ll be able to share with you how the product is for my skin. 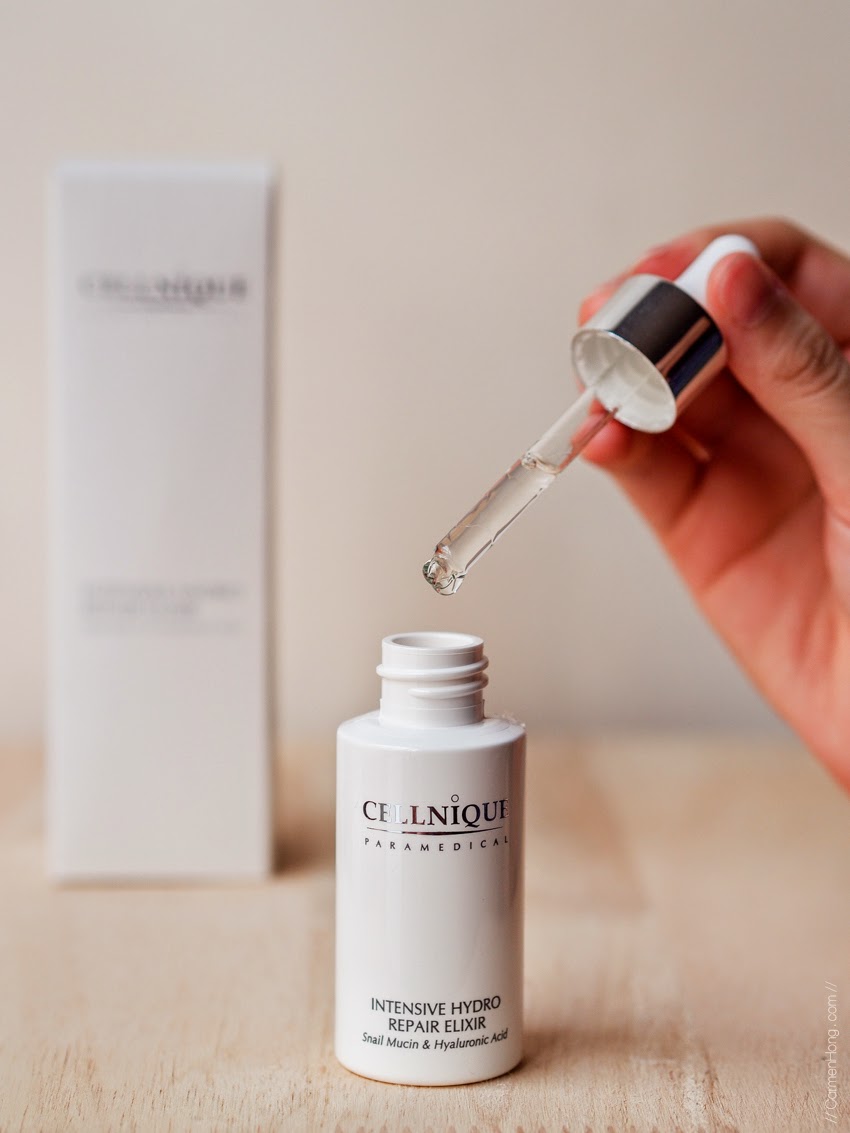 Unlike most of my beauty products, this came with a dropper. Apparently, I was supposed to drop it onto my fingers and I just have to apply it like that. I found that different than my usual gel cream. But then again, this is a water based serum. The product write up found on the website (here), recommends it to be used day and night after cleanser, toner and eye care. 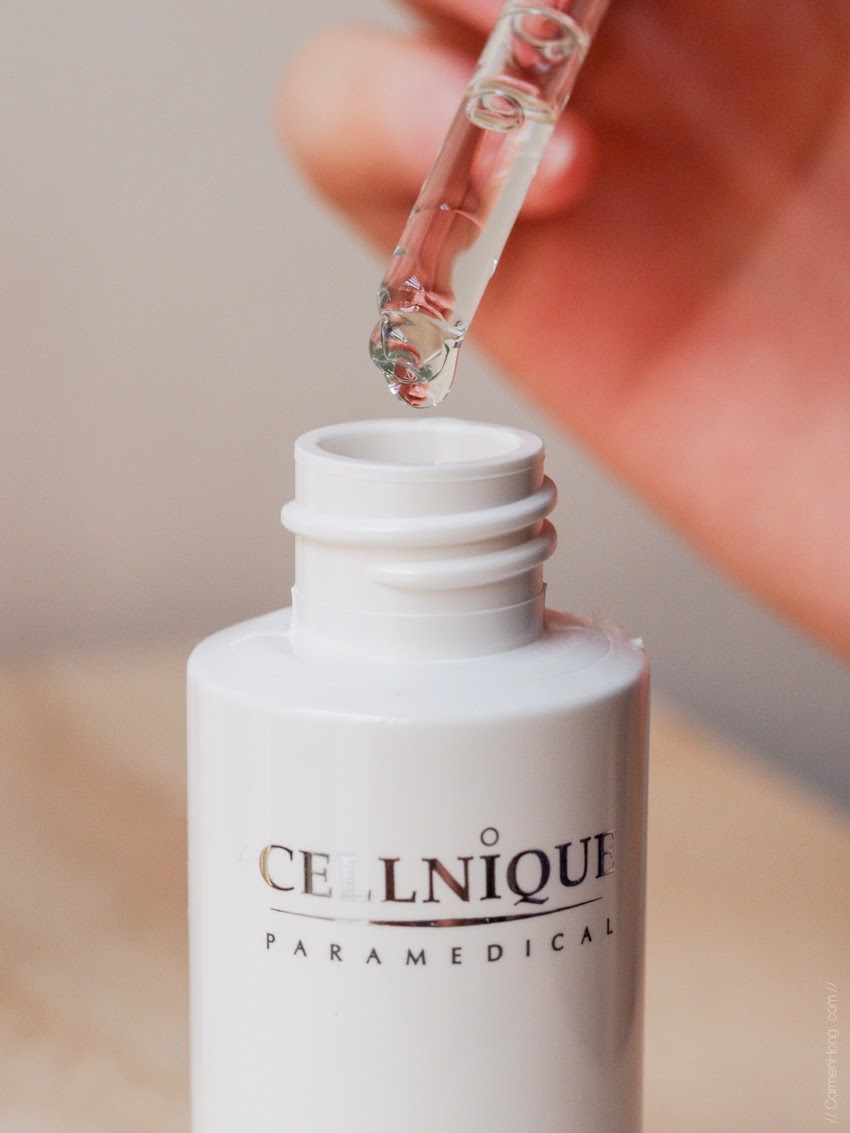 Like I mentioned earlier, it’s a water based serum so you can see from above that it’s rather watery. I didn’t attempt to shoot it with a droplet on my hand like I would usually do because it’ll just slide down. It’s that watery. Application wise, what I do is that I use two drop for my cheeks and another one for my forehead. I applied them in circular motion using my middle finger also known as the beauty finger, the finger with the lesser pressure.
The product is scentless and clear. When applied, it absorbs rather quickly. Which what I loved most in beauty products, because I despise products which leave a sticky residue feeling. I read some comments that it wasn’t hydrating enough, but for me, I think the products works fine just for me. In fact, from the write up the product contains Hyaluronic Acid.

“A powerful water binding agent which able to give skin 1,000 times more hydration. When hyaluronate acid is applied on the surface of the skin, it forms a permeable layer to lock in moisture, leaving skin a healthy and youthful appearance.”

For me, it works great as a substitute for my gel cream and I don’t see my skin flaking or peeling which means it hydrating enough for me. But don’t expect any sensation when applied, but just because it doesn’t have does not mean it’s not good enough. 🙂 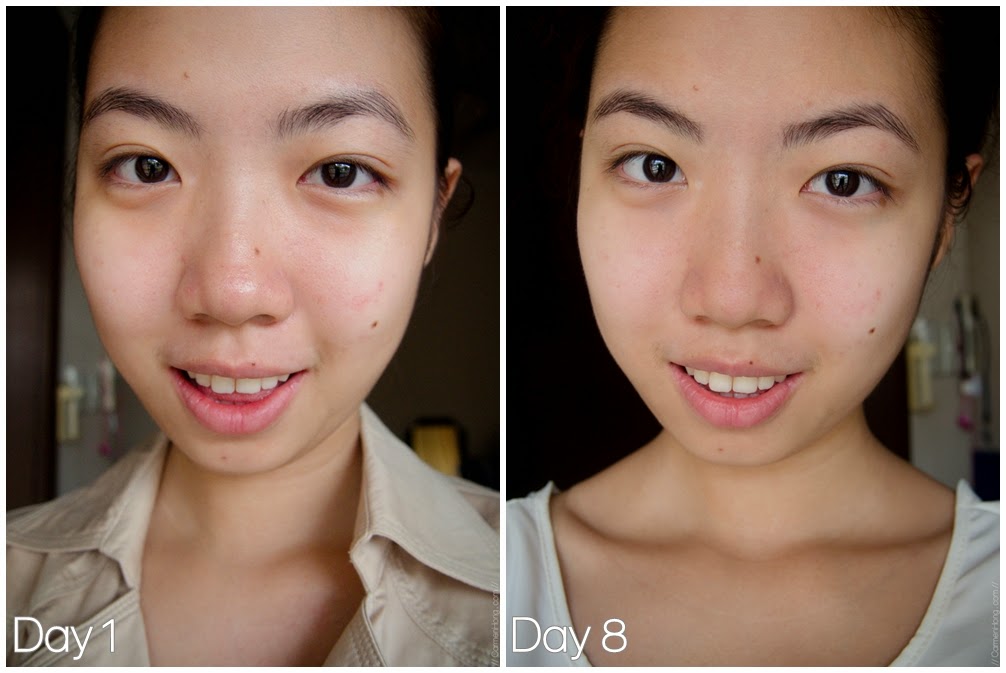 These two pictures show a comparison of my complexion from the first day I used the product and then, a week later. In a week, you can see my face is less flushed and my skin healthier in the second picture. I definitely look less tired and these pictures were taken after I woke up. So, according to the website, here are the benefits of using the products. 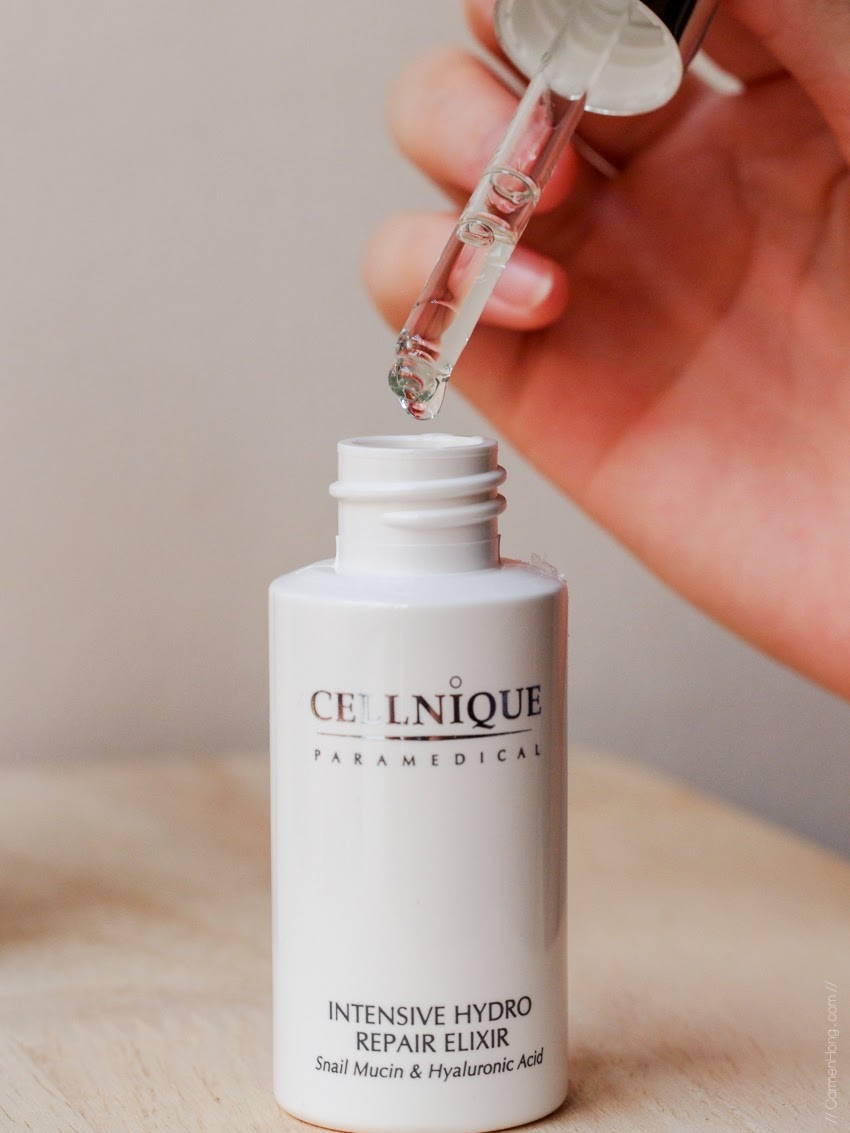 When I first started using this product, I had no expectations on why and how it would work on my face. And personally, I found it to be rather good especially when I can see the results in just under 7 days. My current gel cream only moisturises my skin but I never did notice any effect like this. With my late nights recently and with many more to come, I would need a product like this which will repair my skin. Personally, I think the price is rather reasonable for 30ml of this product. At the rate that I am using, it’ll probably take me a longer time to finish. So, I really wouldn’t mind paying RM199 for a product that works. I’m actually considering using this in my regime for good!
If you are interested in the product, you can get them from http://www.cellnique.my/index.php/intensive-hydro-repair-elixir.html here or you can visit any Cellnique’s beauty centres. For KL peeps, http://www.cellnique.my/index.php/location/west-malaysia/wilayah-persekutuan.html and for those from other part of Malaysia, http://www.cellnique.my/index.php/location.html. (Mouse over Location, then click on your state.) 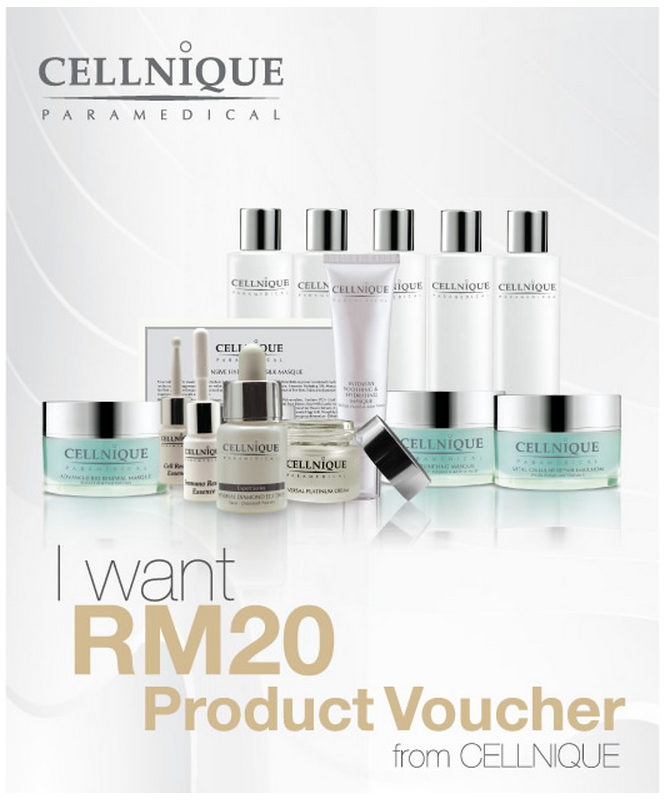 And guess what, I have great news for my lovely readers! The wonderful peeps at Cellnique have decided to give away RM20 discount vouchers for my reader, limited to the first 50 readers. All you have to do is leave a comment here >> https://www.facebook.com/cellnique/posts/10152081277977963?stream_ref=10, and then fill up your details here >> http://www.cellnique.my/voucher-redeem/RM20-product-voucher/. An e-voucher will then be sent to your email!