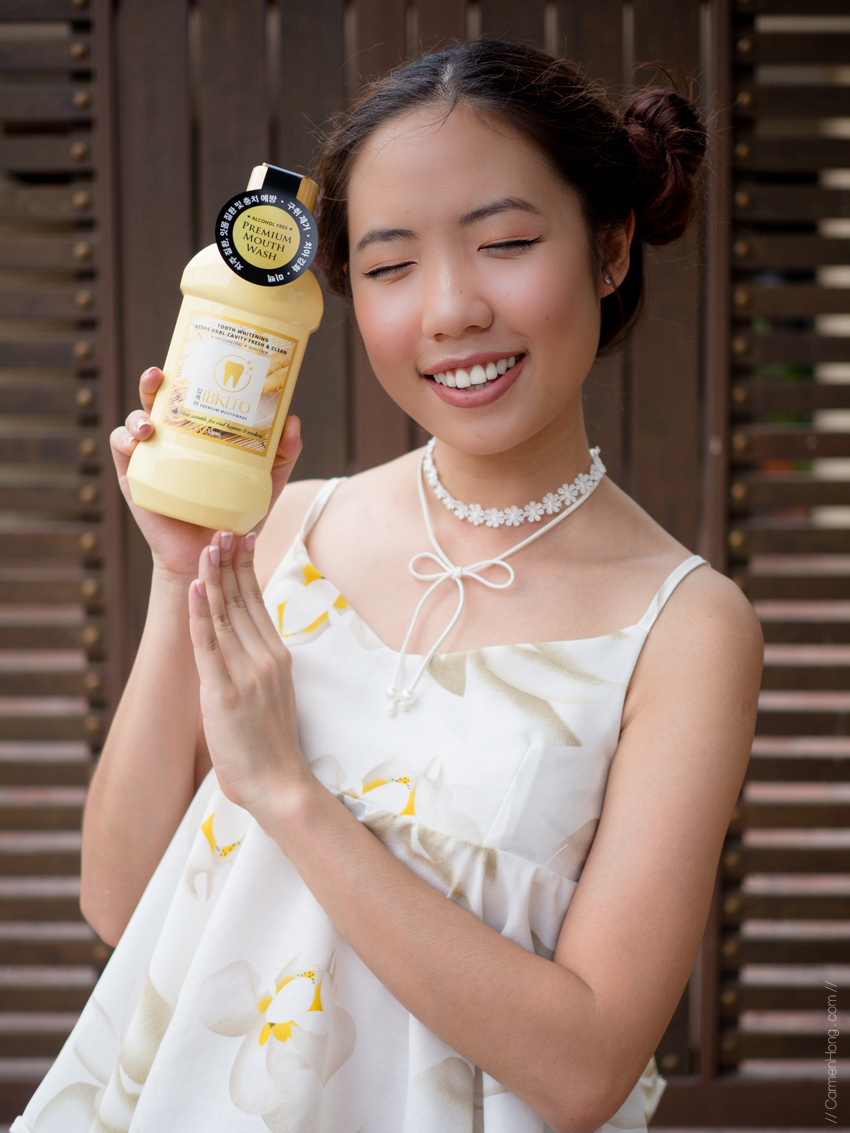 There is no denying that oral hygiene is an important element, one which we ought to give extra attention to. But how often do you actually use mouthwash after brushing our teeth. For me, that was something I’d do occassionally mainly because I’ve never been a fan of the strong minty aftertaste and the burning sensation that it leaves you with. All of my life, I’ve only known of these bright coloured minty mouthwashes only. Little do I know that there are actually another type of mouthwash… like the one from IBKEEO, which is a Premium Oral Hygiene Mouthwash. 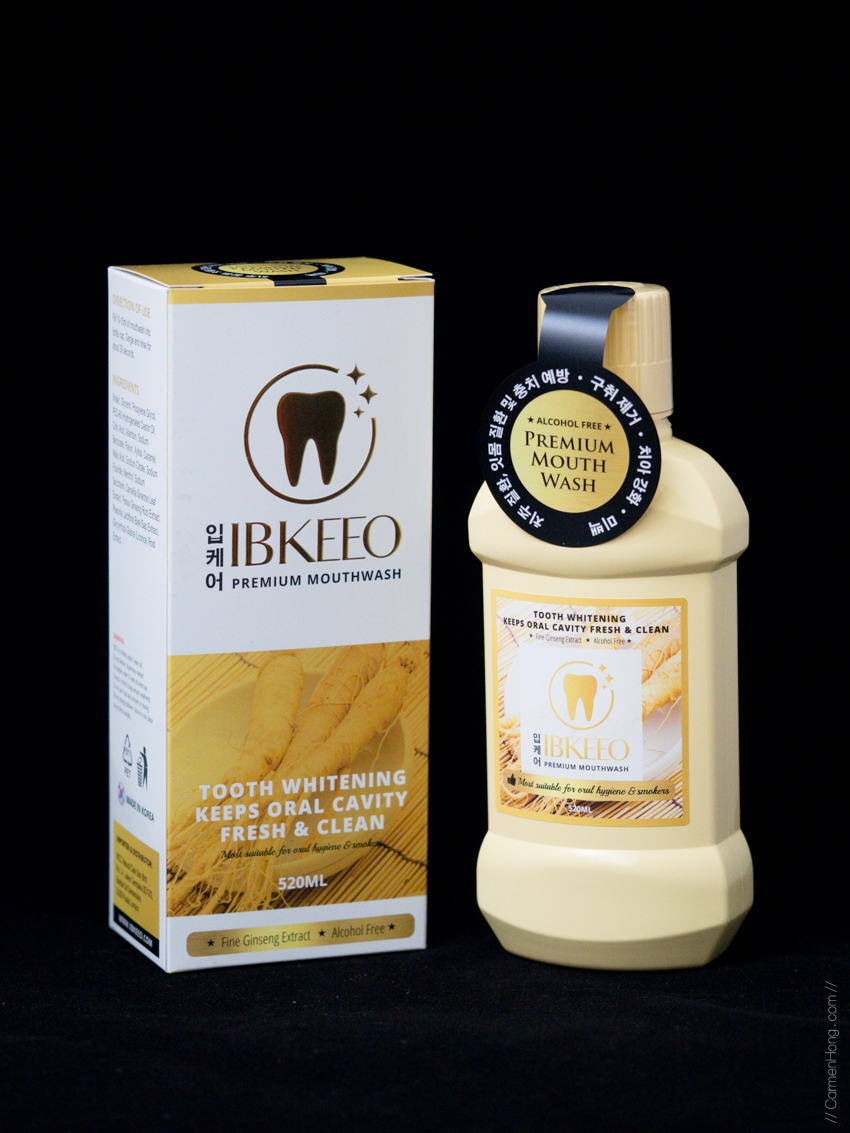 The mouthwash from IBKEEO is enhanced with quality Korean ginseng extract, white peony (an active antibacterial ingredient, preventing growth of bacteria), tea tree (helps to remove protein leftover in the mouth and eliminate bad breath) and licorice (activates salivary glands, prevent dry mouth, and cleans oral hygiene).
One of the unique feature of this mouthwash is the visible protein leftovers which will show after you gargle with it. These protein leftovers are as a result of protein elements which cover our teeth and gums. Usually after meals, oral bacteria and food will attach themselves to this protein membrane. With an average temperature of 37°c, it makes for a perfect breeding ground for bacteria.
Did you know that these bacteria, or more precisely the anaerobic bacteria, the bacteria that live on the back of the tongue is responsible for bad breath? How these bacteria causes the bad breath is by feeding on protein leftovers in your mouth producing the volatile sulfur compounds! The best way to eliminate this is by gargling with a mouthwash which can effectively remove the protein elements, along with the bacteria that feeds on it. 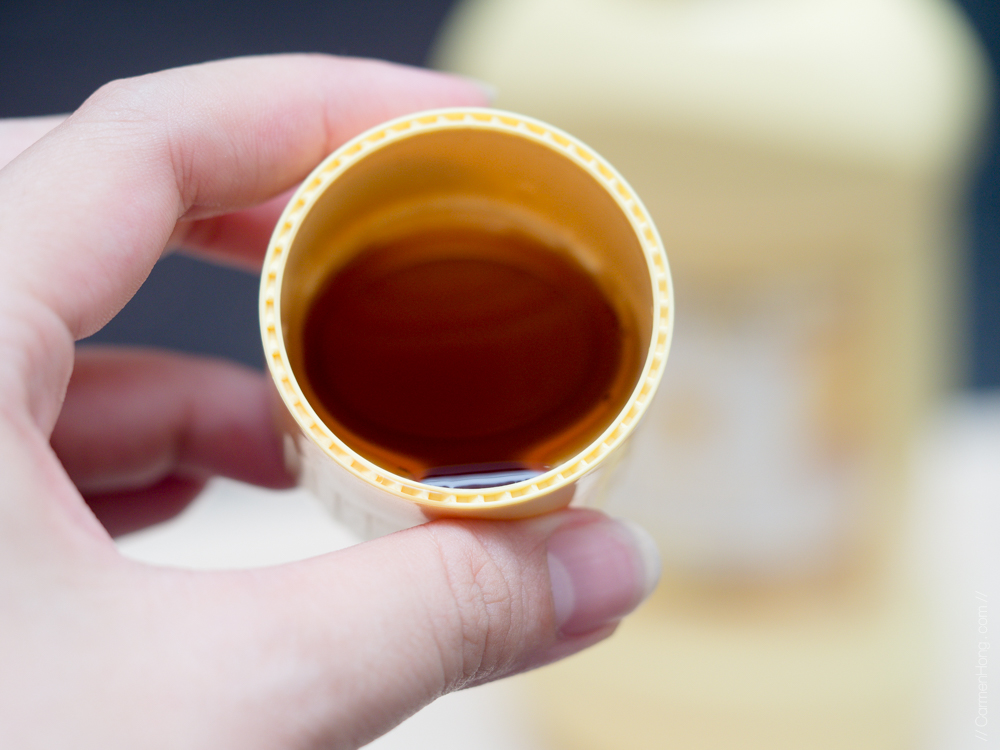 As I mentioned earlier, IBKEEO mouthwash is different compared to the rest in terms of the colour as well as the flavour. Usually, typical mouthwash are brightly coloured — blue, green or purple shades, but the ones from IBKEEO is in a shade of brown. This is presumbly because of the ingredients used especially ginseng, being the main ingredient. As you can expect, the flavour of the IBKEEO mouthwash has a strong ginseng taste, alongside with traces of other herbs as well.
I found this rather pleasant compared to the typical mouthwashes, which meant that I can gargle it in my mouth longer than I would usually. This would actually help in eliminating the bacteria and the protein elements as I have been told it’s ideal to gargle longer. When I tried to gargle with IBKEEO mouthwash, I found that there are indeed traces of protein elements! It’s actually a bit icky for me to publish the picture of it here, but if I don’t show … you won’t be able to know what I’m talking about. So be warned before you scroll down further (the pictures are shown after the instructions below)! 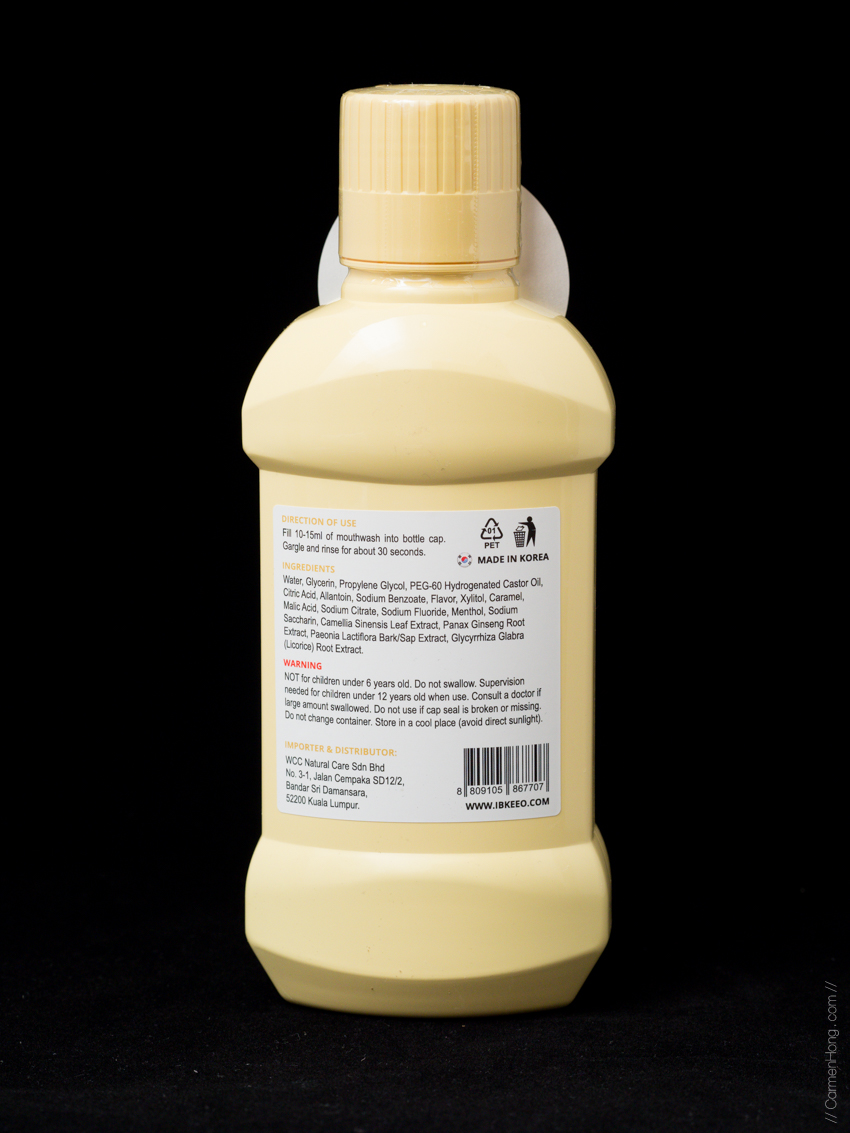 HOW TO USE?
1. Pour 10-15ml IBKEEO Oral Hygiene Solution into a cup | 2. Empty cup into mouth and gargle for 20-30 seconds | 3. Spit out and you will see visible protein leftovers. | 4. Enjoy fresh breath and healthy oral hygiene 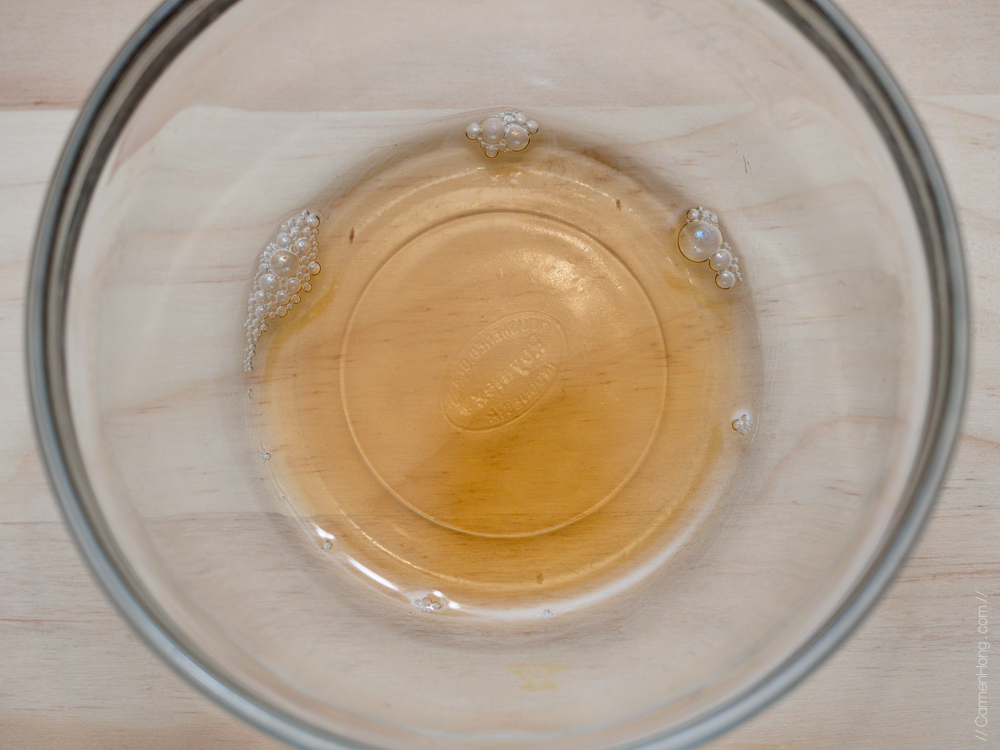 | The original condition of the IBKEEO mouth wash before rinsing | 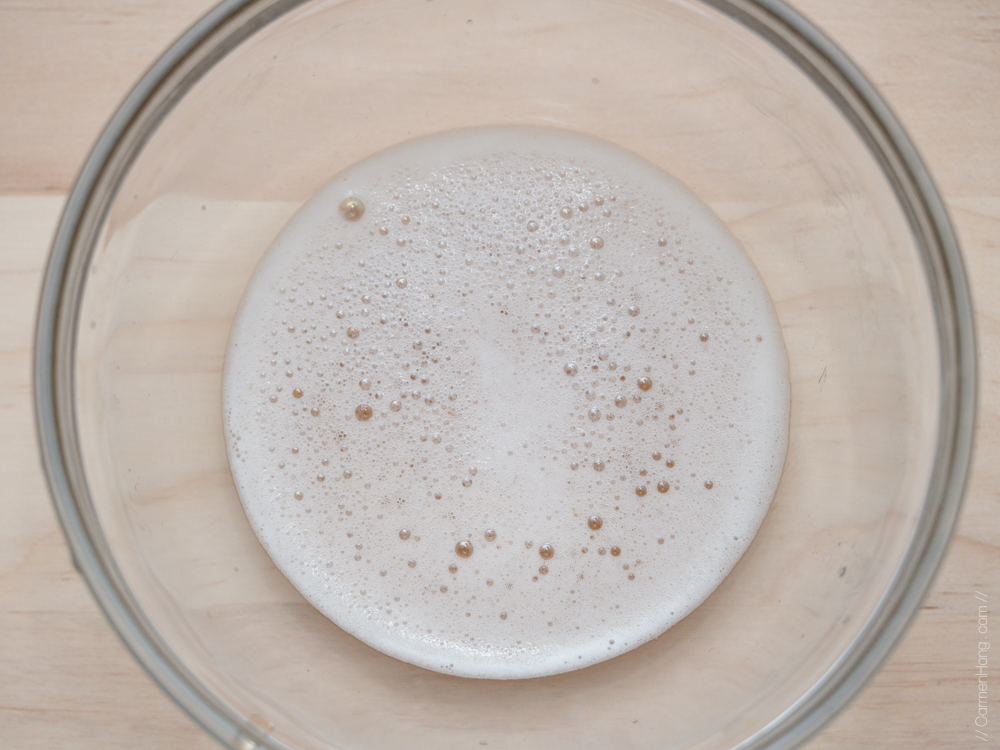 | Foam caused from the gargling of the IBKEEO mouth wash | 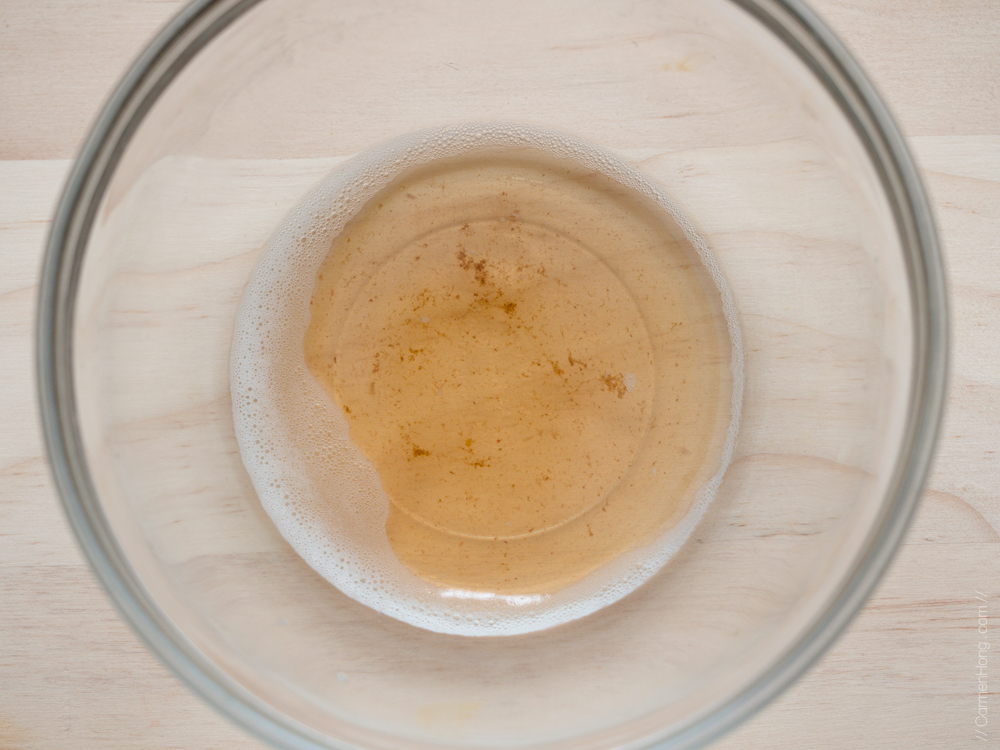 | Can you spot the protein residue in the picture above? |

Personally, I found that this mouthwash is perfect for those who are not a fan of the “spicy” minty  aftertaste that most of the typical drugstore brand offers. This one is in the flavour of ginseng, making it almost herbal like. It will take some time to get used to this flavour given that we’ve been so accustomed to the mint version. That aside, I found it very intriguing that I’m able to see the results after gargling my mouth… with the protein residue present in the after gargle rinse, you’ll feel rest assured that your mouth is cleaner now. However, the protein residue may not always be present which actually indicates that your mouth is clean!

This ginseng flavoured mouth wash is definitely unique but it might not be everyone’s cup of tea. But fret not, as there would be a new flavour being introduced soon! Look out for that annoucement on my blog in due time. I don’t know yet what the flavour would be but I’m intrigued to find out what other flavours IBKEEO would be offering! 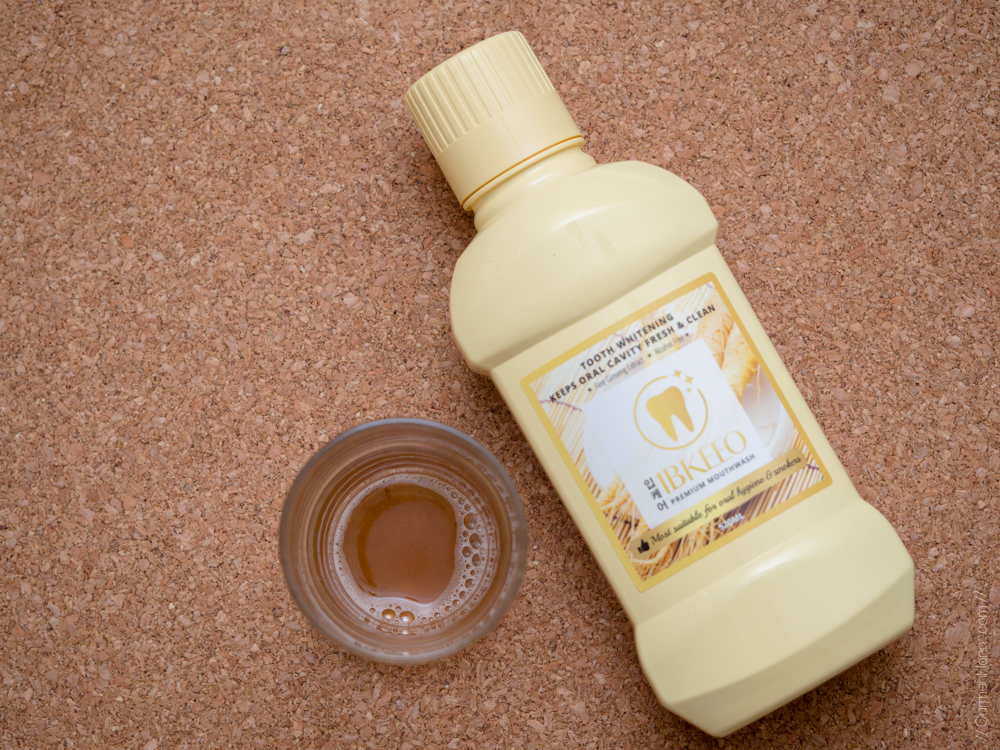