In Beauty, Make Up, Review

Did you read my post on the amazing Lip Sticker? The one that gave my lips such edgy look? If you haven’t, you can read it here. What did you think about this trend? For me, I love how edgy it was; wear the Lip Sticker out, and you’re bound to get attention (read: heads will turn 360 degrees). Haha. So, it is not exactly a very, everyday-I-can-wear-this-out look. 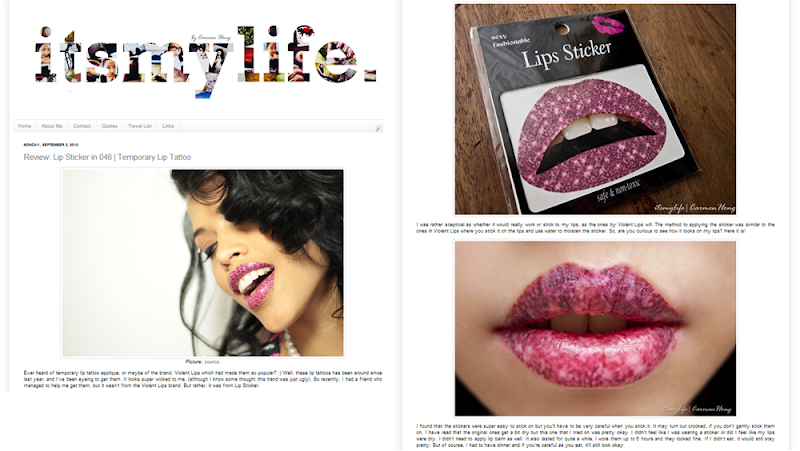 Now that you have seen/read about the Lip Sticker, would you believe me when I say that there is already a sticker for eyeliners as well? But then again, with all the trends around these days, nothing would really come off surprising anyway. 😡 Anyway, the eyeliner stickers sounded quite interesting and I managed to get my hands on a few of them. 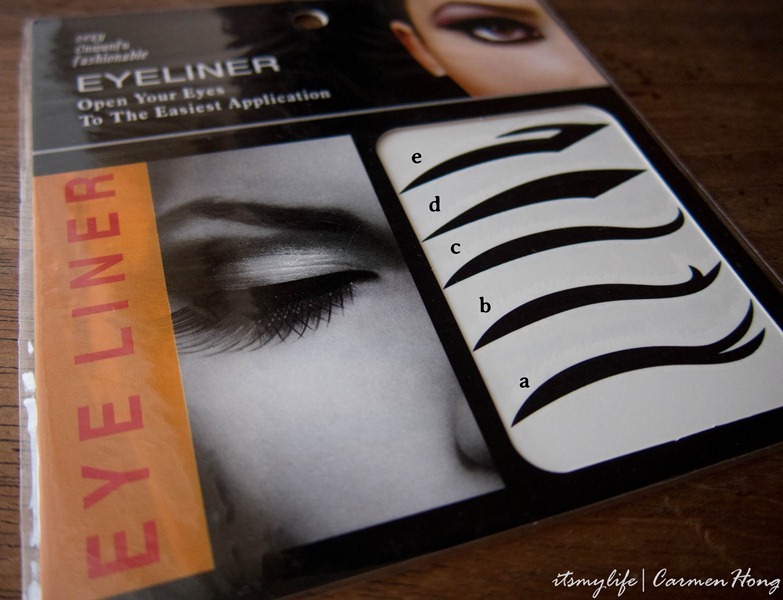 This is how it looks like; there are five pairs of different designs in a pack. I had initially thought that they would be like a sticker; being able to peel it off from the film and then stick them on to my eyelids. 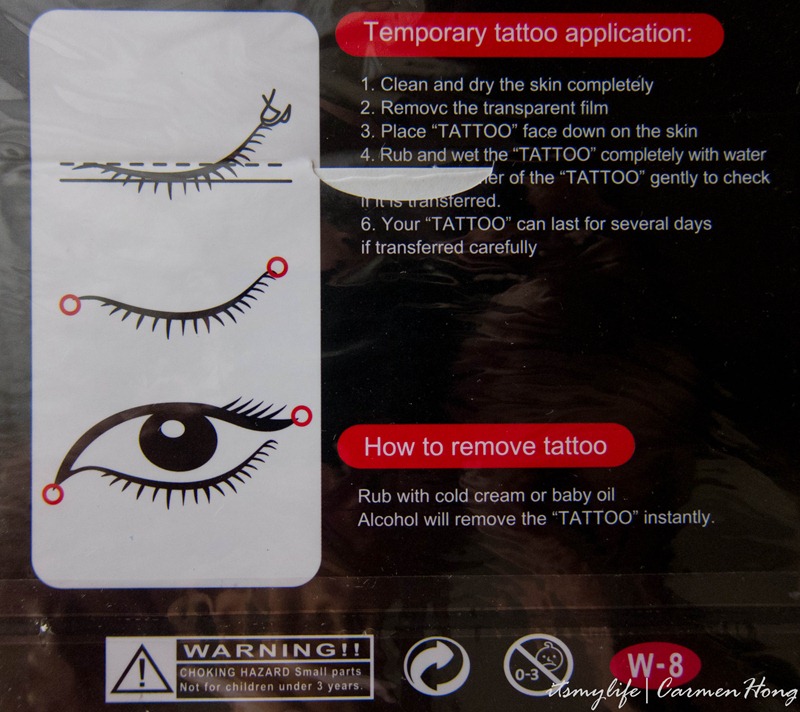 Turns out that the application for this eyeliner was similar to the Lip Sticker, whereby the sticker/tattoo is transferred using water. I actually did a step-by-step photo instructions for this temporary tattoo eyeliner. Here it is; 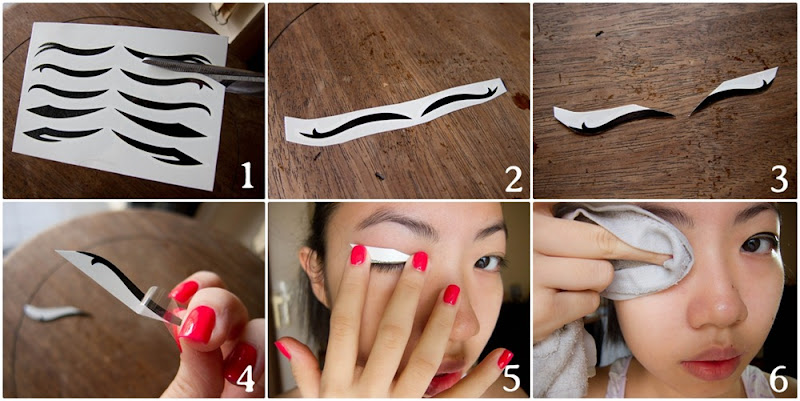 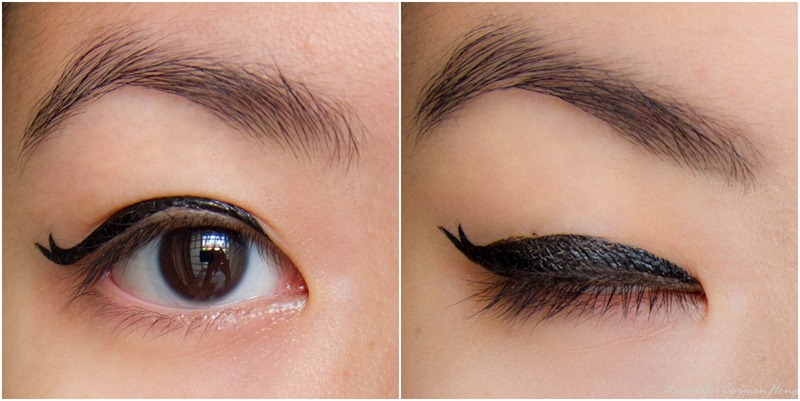 And this is how it looks! 😀 So awww-sum right?

It was super easy and fun to do. The picture on the left is without any foundation and was taken immediately after I managed to stick it on. On the right, is after I put on some BB cream and touched up the eyeliner. Sometimes I find that when transferring, not all it will get transferred properly. It’ll like extremely tiny gaps, so this eyeliner sticker is best to use with an eyeliner. But mostly all I needed to do was to fill in the gaps only.

The product claimed to be able to last a few days and hence, it is known as tattoo eye liner. I was sceptical about it at first, so after the first time using it I didn’t remove it just to test how long it was able to last. On the second day, the eyeliner still looks almost as good as when it was first applied. It was only after the third day when the sticker was slowly wearing out, with more gaps. Again, these gaps can be filled up using eyeliner. So yes, I must say that it really does what it said to do.

But for it to last longer, you’ll have to try to avoid washing your eyelids like the rest of your face. Besides that, the removal of this sticker was very easy as well; I used olive oil and cleaned it using a cotton bud. 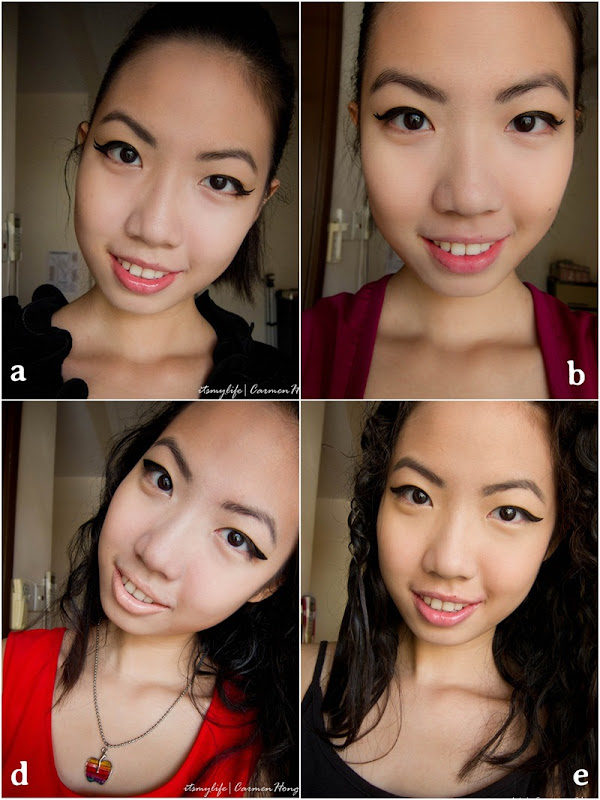 And here you can see a collage of the different designs of eyeliners I used, according to the alphabets; a,b,d and e. I haven’t tried c yet To be honest, I didn’t like design e, because there was a gap, it ended up looking weird. So, I filled in that space using eyeliners instead.

After trying out most of the designs, I find that these eyeliners are simple enough to be worn out without looking over the top. But, it is uniquely designed so it doesn’t look too plain and normal. This set of eyeliners are actually the basic ones; there are two other fancy sets. 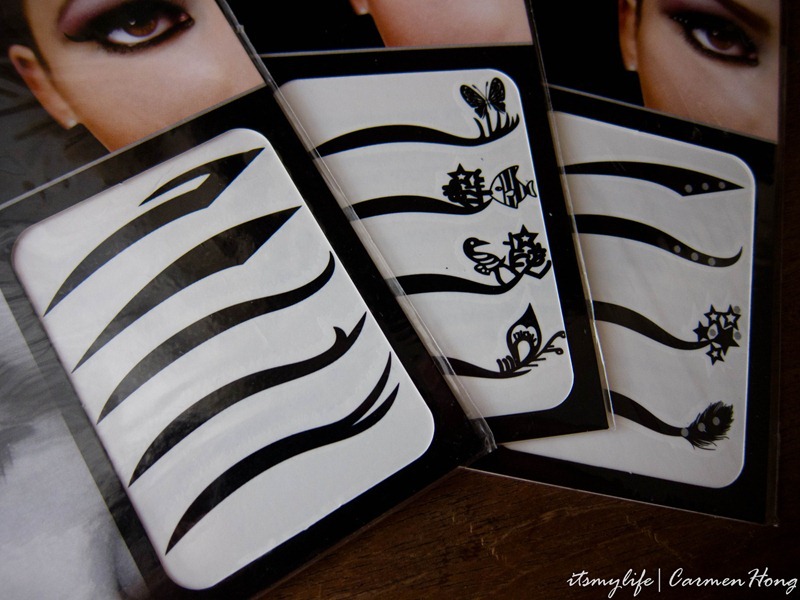 If you have read my post on thirtyfour’s blackplatinum event, you may have saw that I was wearing one of the fancier eyeliner sticker. Here is a picture of myself with it. 🙂 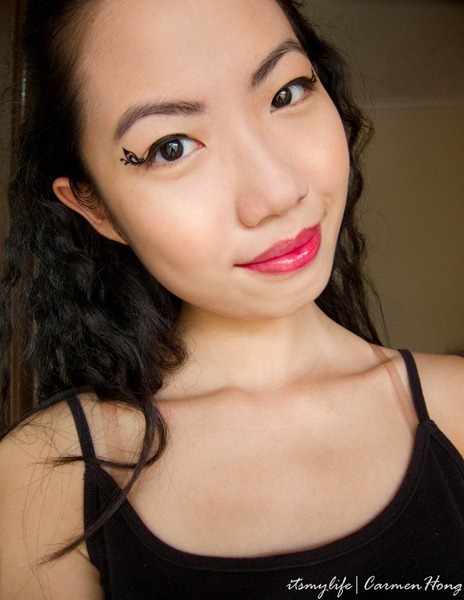 As you can see  I had minimal make-up on my face, except the lips because I wanted to focus to be on my eyes. I really liked how easy it was to do this, instead of having to spend like 20 mins on eye make-up, I was done in about 5 mins max.

This was quite a picture heavy post, thank you for reading it till here. So I’ll just give a final conclusion on what I feel about this product; super easy and convenient for those who look for something different from the usual drawn eyeliners. But since it have to be transferred, instead of sticking it on, that part can get a bit troublesome. Sometimes even, there are tiny gaps or the sticker wasn’t transferred nicely. That is when the old school eye liner would be useful.

PS – I had actually realised that these were probably inspired from Dior’s Velvet Eye. After more Googling, I found out that Sephora and a number of other brands did come up with their own versions as well. But I’m guessing those didn’t take off as well as how Violent Lips succeeded with the Lip Sticker. And compared to this product which was transferred by water, Dior’s and Sephora’s one are made from velvet and can be stick onto the eye lids.