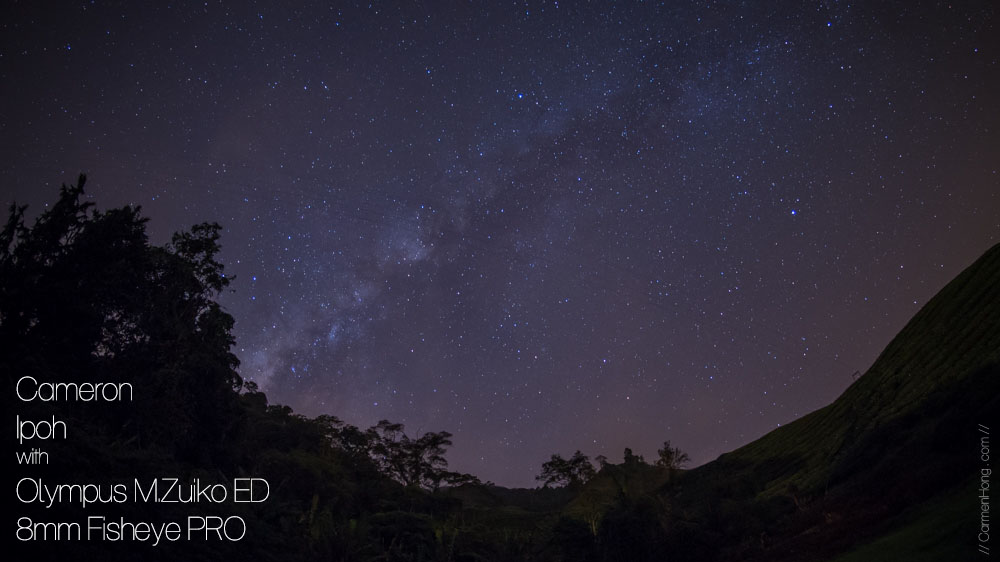 Somewhere along the years in my photography journey, I stumbled upon breath-taking pictures of milky way. I decided there and then, that it would be on my photography bucket list to shoot the milky way. I don’t know how and I don’t know when, but it was on my list and it stayed there for years on (collecting dust). I think it’s normal that that happens, just as how our dreams get forgotten as time passes by.
But thanks to Robin, I had my first opportunity of shooting milky way in Cameron Highlands. Together with my friends, Shutter Therapists (except for Jaslyn who couldn’t make it, else we will have full attendance!) we did a short road trip up to Cameron. I arrived much later at night at about 9PM. From the night drive up, I realised how windy the roads are (so we had to drive up slowly) and also how far the foot of the hill was from the top! It was close to 90 minutes drive up!
First stop was at the steamboat restaurant, where we tried the charcoal version of steamboat. It was comforting to have some warm food to fill our tummies before the midnight milk way shoot. 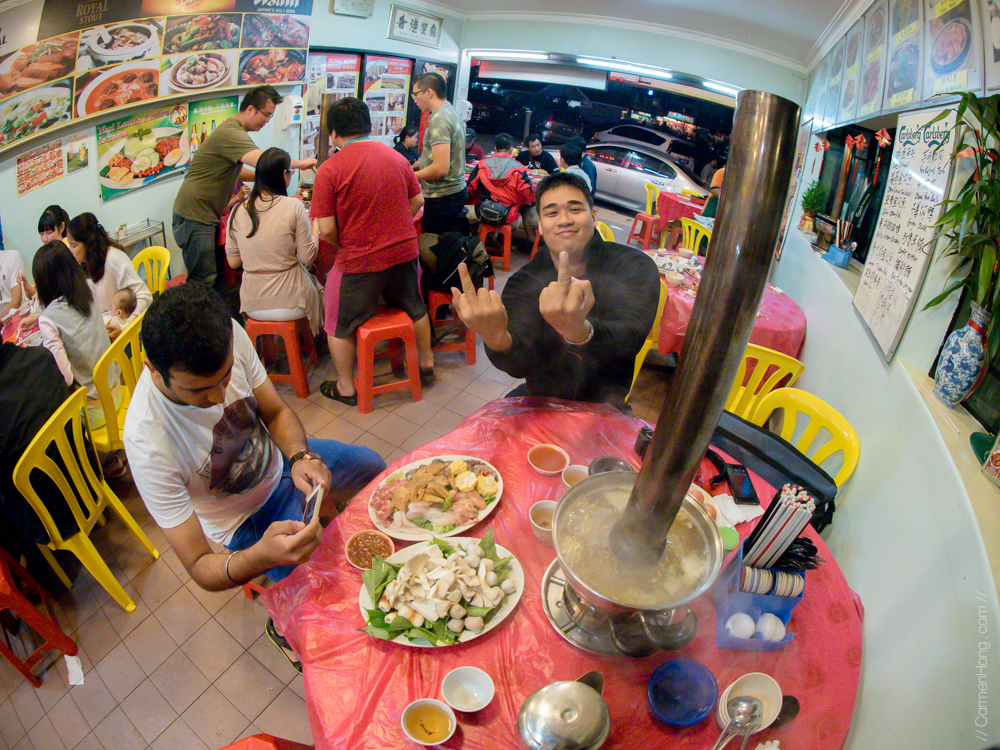 After dinner, we headed over to our apartment for us to drop our luggage and I managed a quick freezing cold shower (after not having shower for 16 hours, I had an early start because I was volunteering in Seremban earlier that day). We quickly grabbed our gears, then proceeded to the shoot location. When we arrived, I stepped down and looked up at the skies. For a minute or so, I was in awe by the sheer number of stars and the milky way. The view was breath-taking and coupled with the chilly weather, it was the best combination. All I wanted to do then was just lie down on the grass and marvel at the beauty of it.

But that didn’t happen because the mission that night was to shoot the milky way! Robin had helped me with the settings on my camera and also, created a cheat sheet for us all. It was super easy to pre-set the settings beforehand and assign a button to enable those settings on my Olympus PEN Lite E-PL7. And just a press of a button, I was able to shoot the milky way. For this shoot, I had the Olympus M.Zuiko ED 8mm F1.8 Fisheye PRO to use.
The fish eye perspective has never been my favourite one, because of the distortion but since we were shooting the milky way, it would be best to use the widest angle I could get my hands on and hence, 8mm F1.8 Fisheye PRO lens. 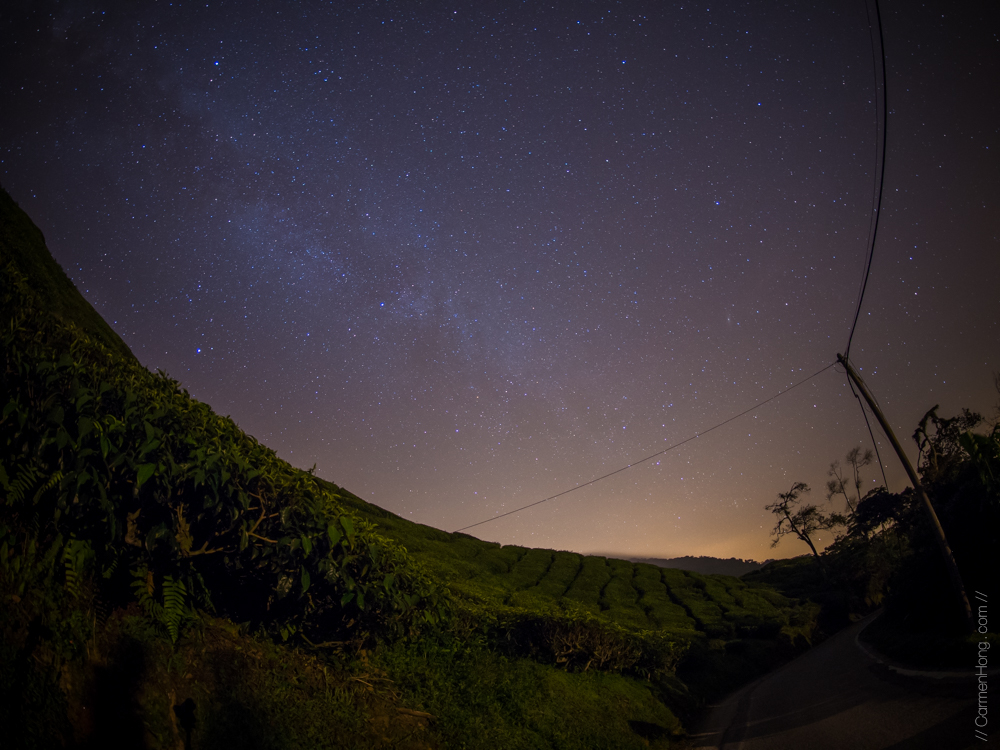 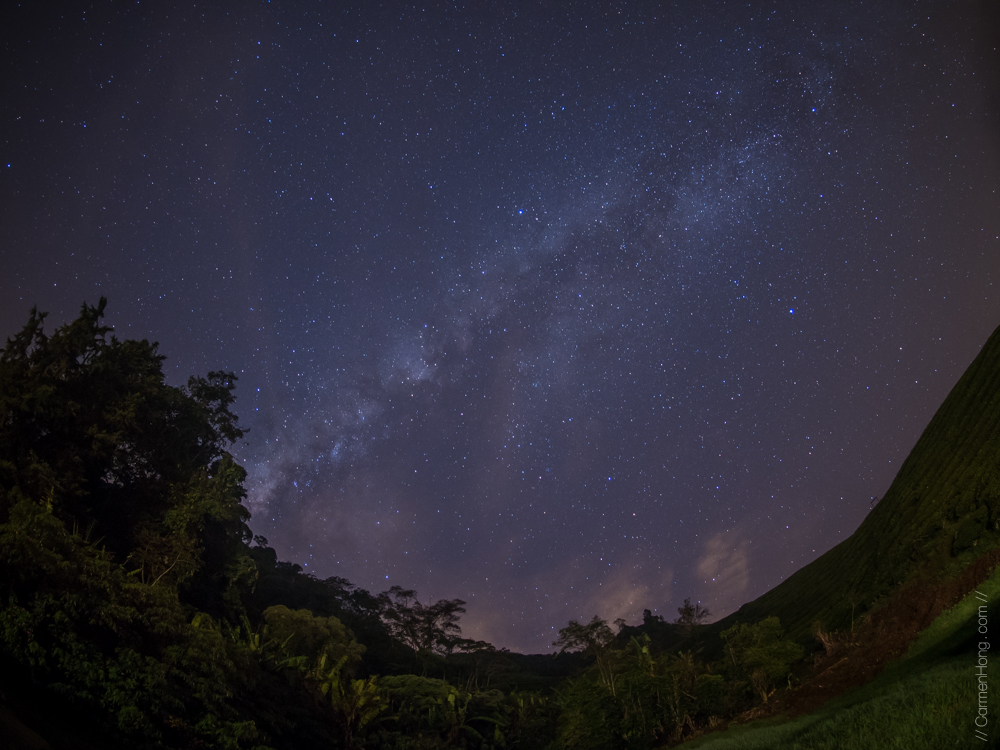 These two pictures are the best of the photographs that I have taken, which was not many to begin with. We only had a window of 2 hours before the clouds returned. Initially during the day, it was raining and I was afraid that we won’t be able to shoot the skies given the possible cloud cover. In the limited time that we had, temperature was dropping from 18 Celsius to 16 Celsius which caused the lens to fog up. I ended up having to constantly wipe the lens and ended up with more hazy shots. I was also shooting with Olympus M.Zuiko ED 8mm F1.8 Fisheye PRO which was little difficult to focus since there is no indicator to set the manual focus to infinity.
All in all, it was such a magical night being able to capture it all, I wish I had more time to explore other compositions. Here’s to many more milky way pictures in future! By the way, I would like to include the link which I referred to for my post processing of the milky way shots; http://petapixel.com/2015/08/13/how-to-post-process-a-milky-way-photo-in-lightroom/ 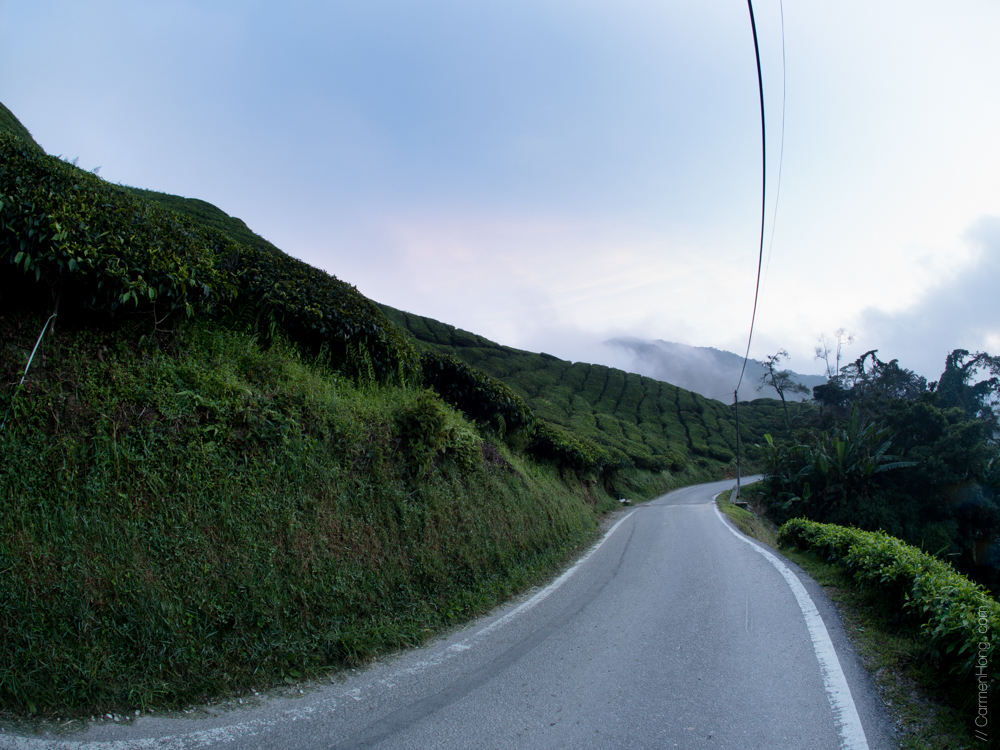 The morning after, our alarms rang at 530AM and we headed out to catch the sunrise. But unfortunately we were only greeted with clouds instead of a glorious sunrise with the tea plantation in the photographs. It was disappointing to say the least, but these things happen and it’s way beyond our control. 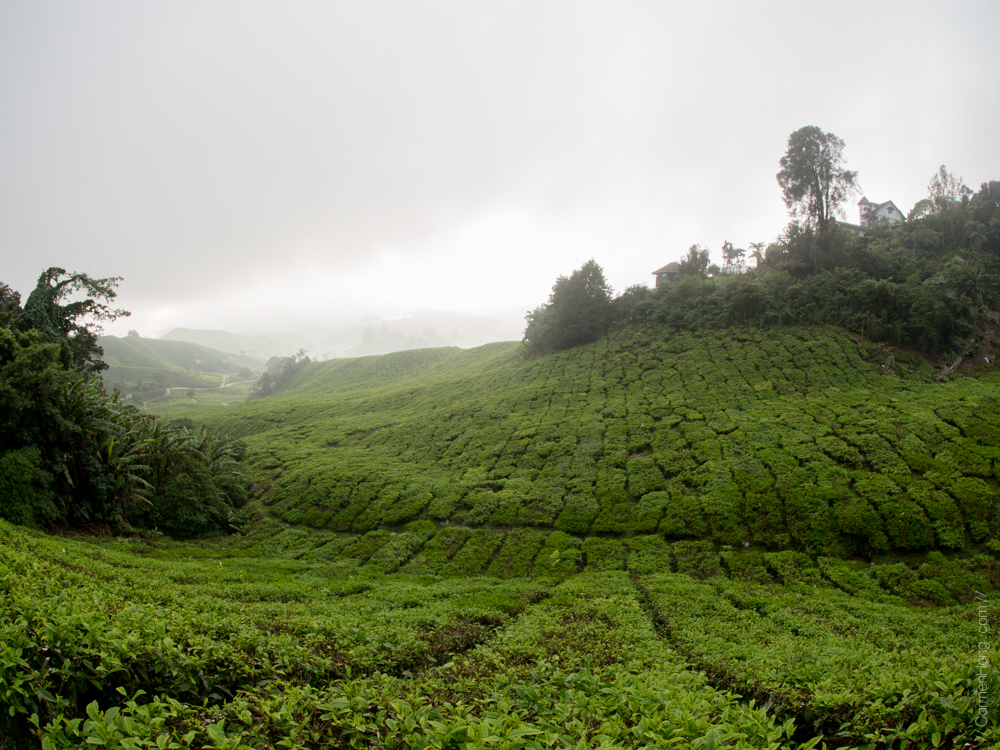 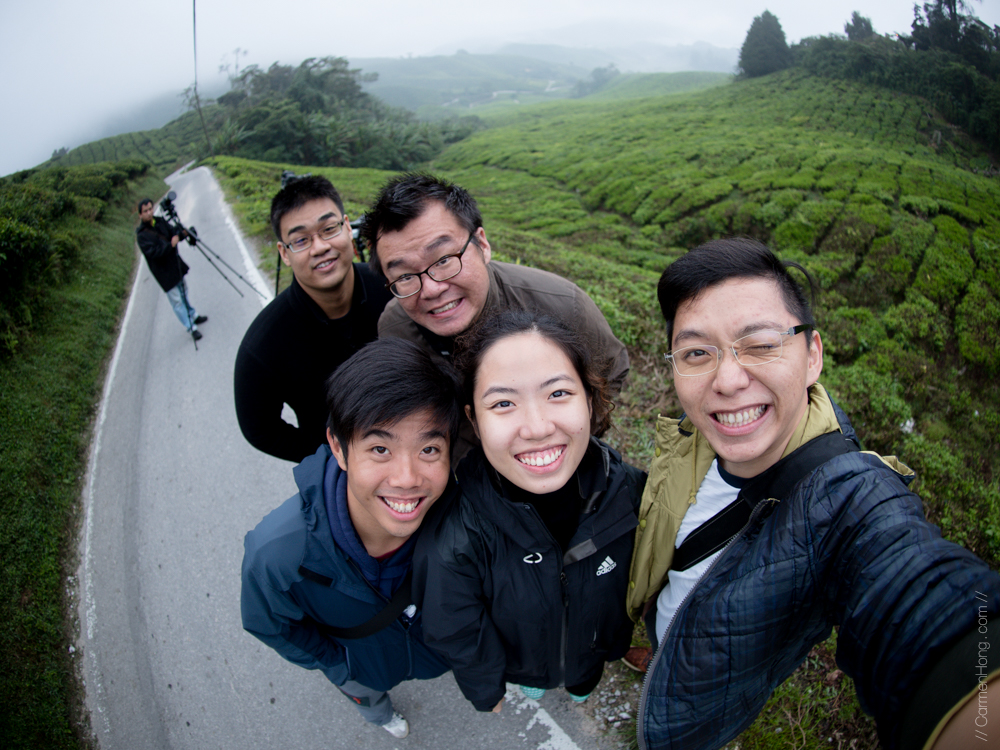 Since I had the Olympus M.Zuiko ED 8mm F1.8 Fisheye PRO with me, I decided to try it to take selfies and some portraits with it. Here’s a selfie taken by Tian Chad together with the bunch of us who woke up for the sunrise shoot. Jackie and his girlfriend didn’t join us for this. Robin and Alex are behind me and Calvin is on my left. 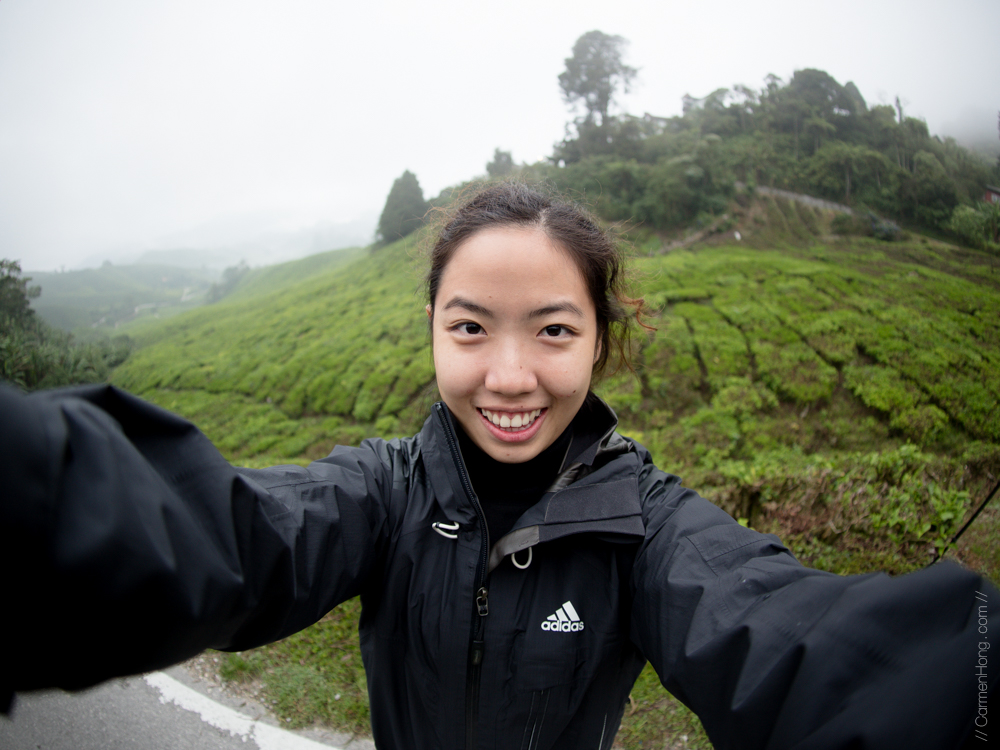 Let me try a selfie! No make up face with only 3 hours of sleep. 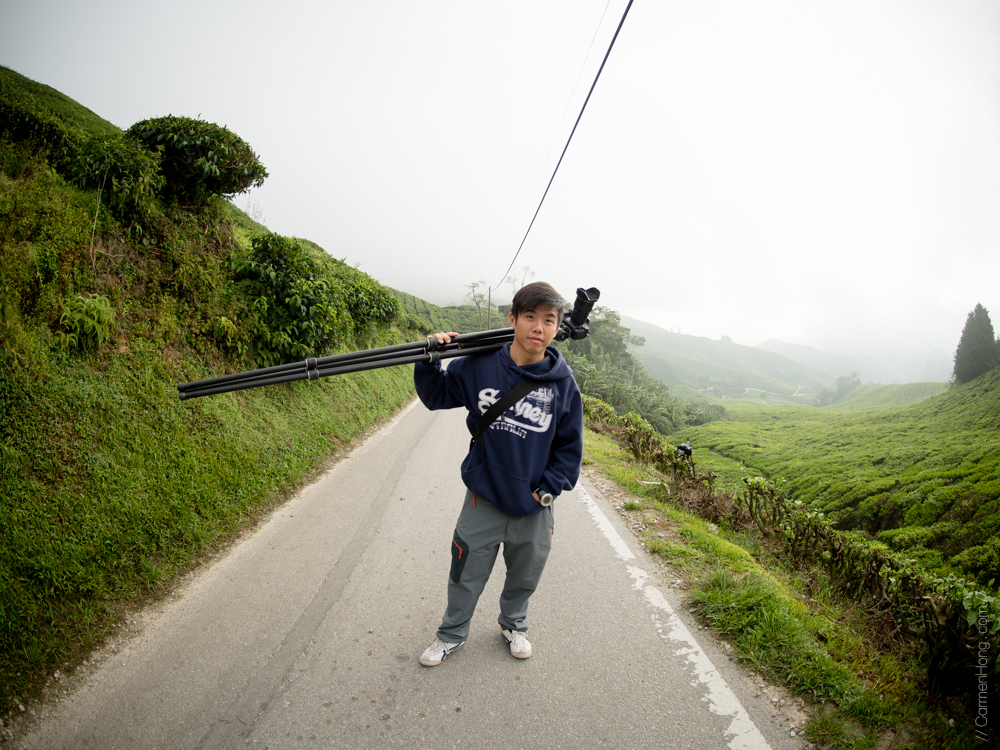 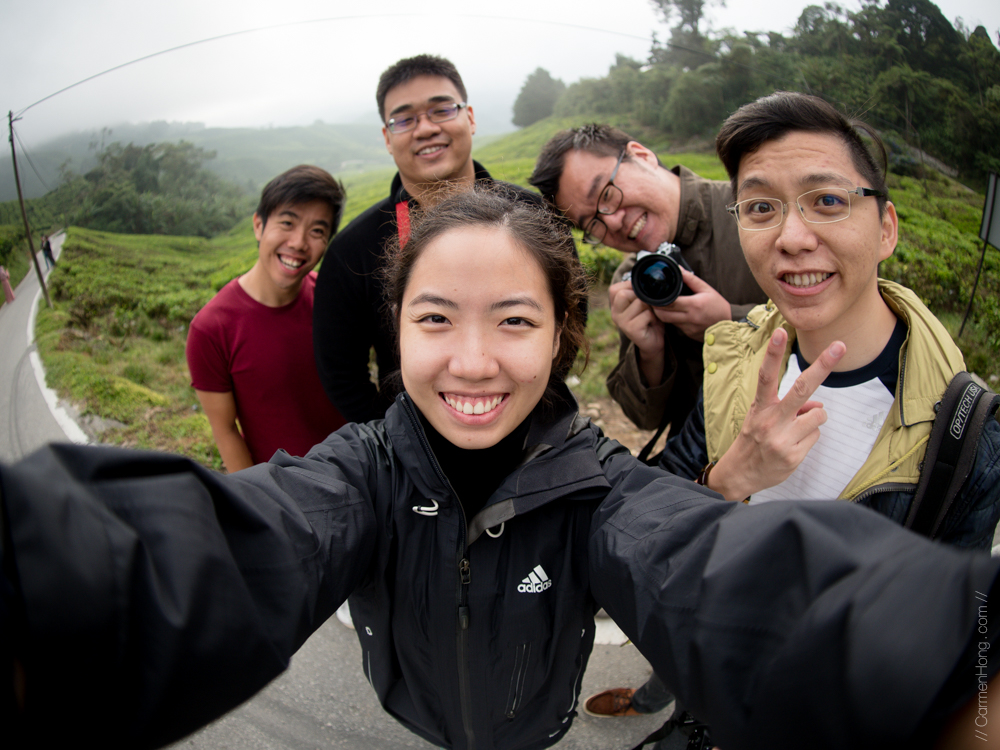 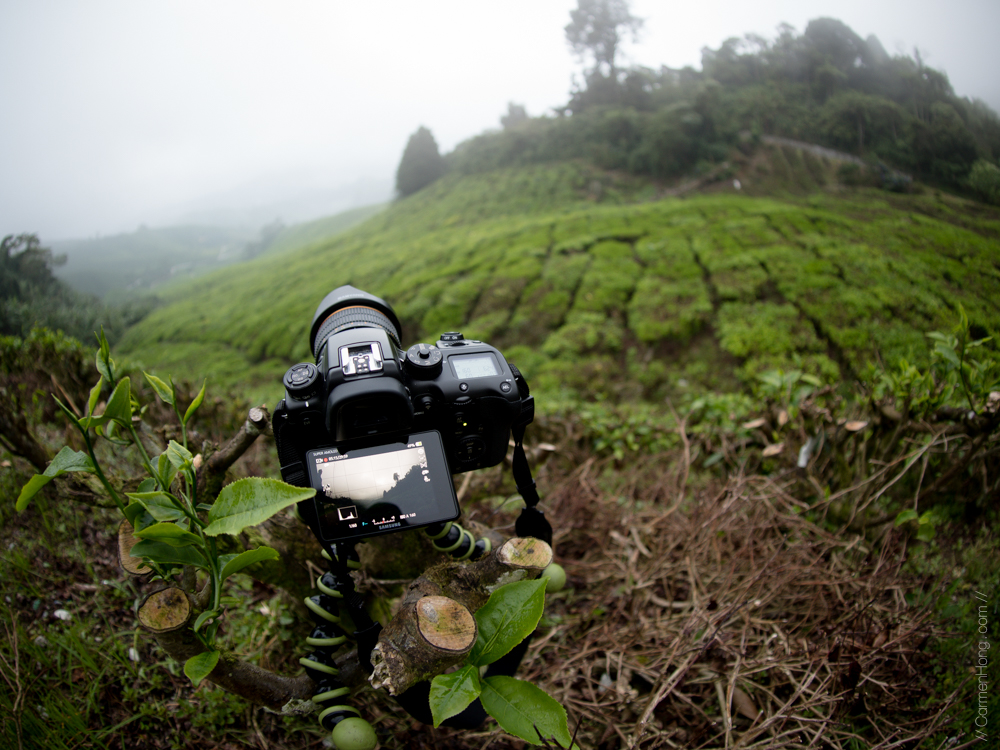 Tian Chad decided to do a time lapse with his camera. I can’t wait to see the outcome! 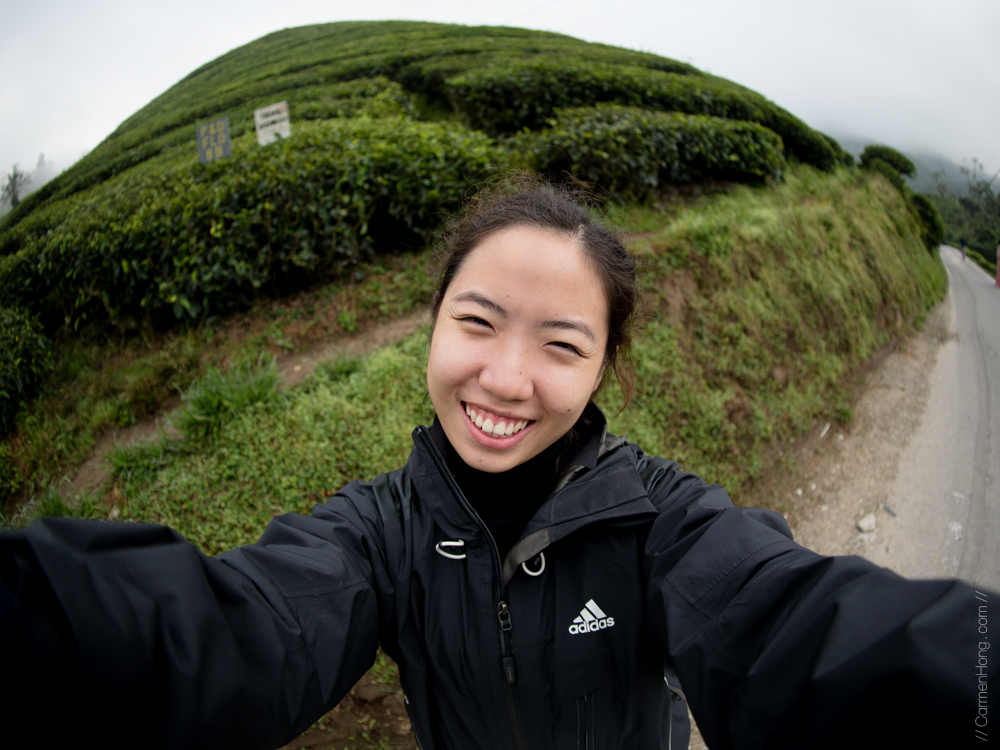 The last selfie at the tea plantation before we left 🙂
After the unsuccessful attempt of shooting sunrise, it was time for breakfast! And since I was the food blogger amongst my friends, I got to decide where we could head to for breakfast. I did a quick Google search and in some forums, there was mentions of a deaf couple who sold nice pancakes. I thought it would be a good idea to eat there. However Tian Chad did mention that it was just okay, in terms of taste. But since there was no other places Google can tell me of, so we decided on that. 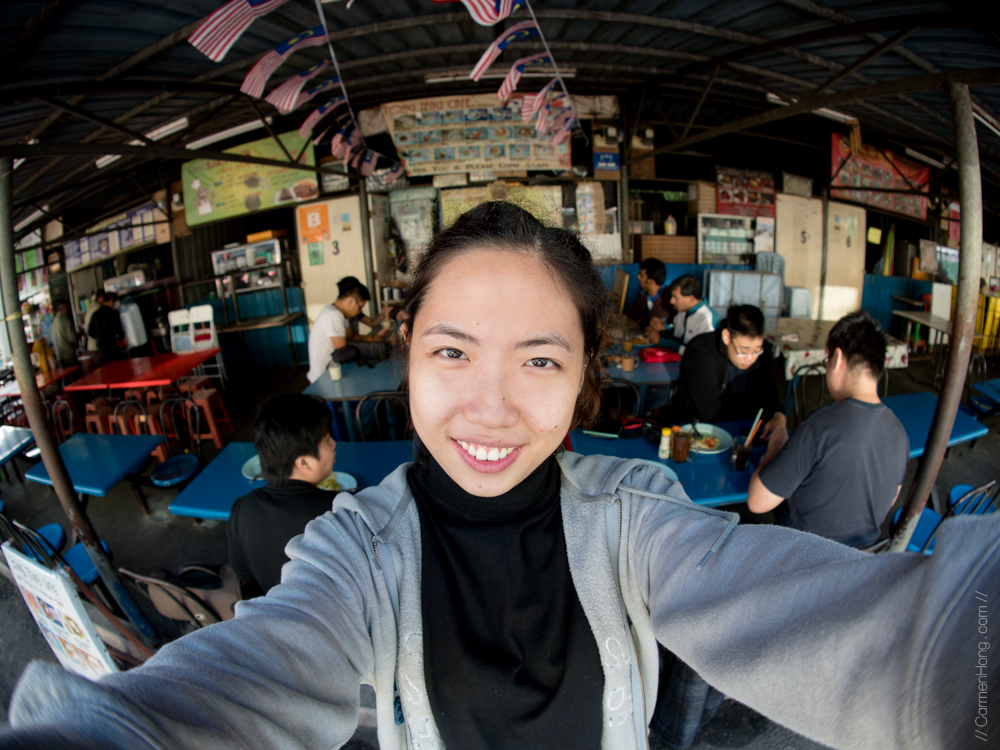 With the Olympus M.Zuiko ED 8mm F1.8 Fisheye PRO, you can capture a lot more in your photograph. I find it extremely convenient how I managed to capture the name of the cafe I was at, coupled with the ambiance and the details of how the cafe actually looked like. Not to mention, my face in it as well since this is a selfie. 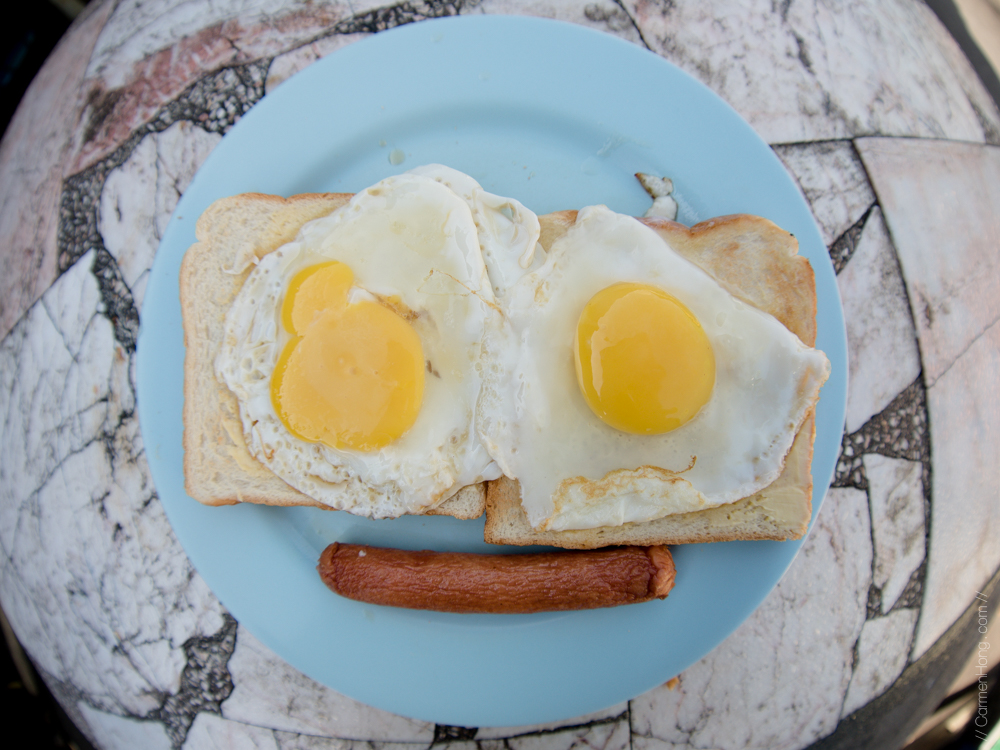 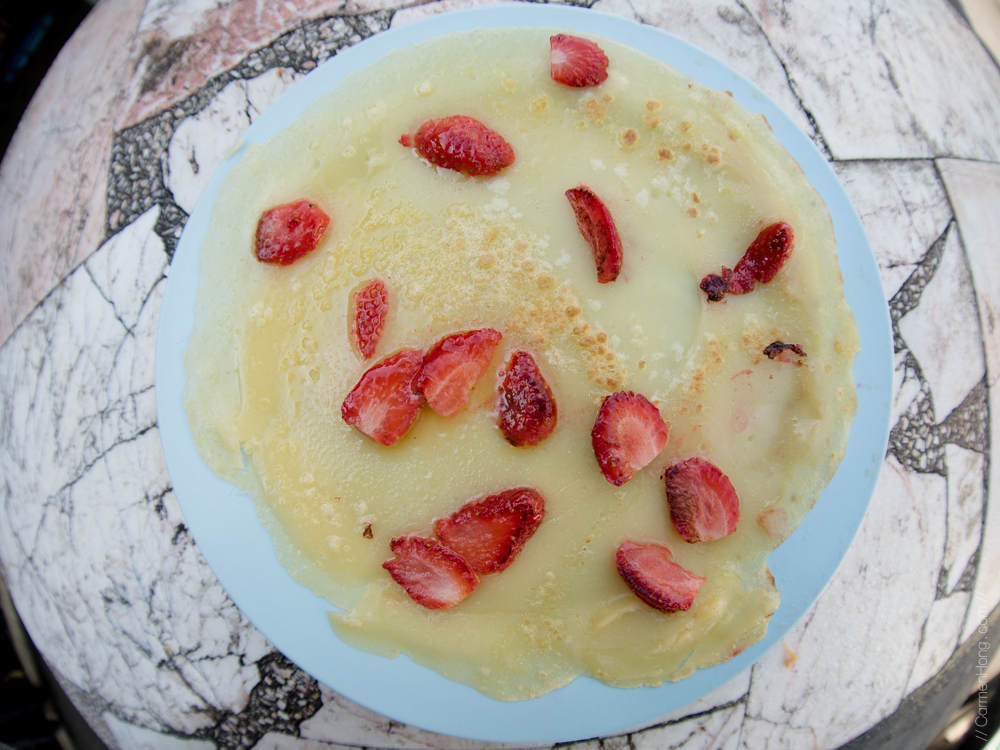 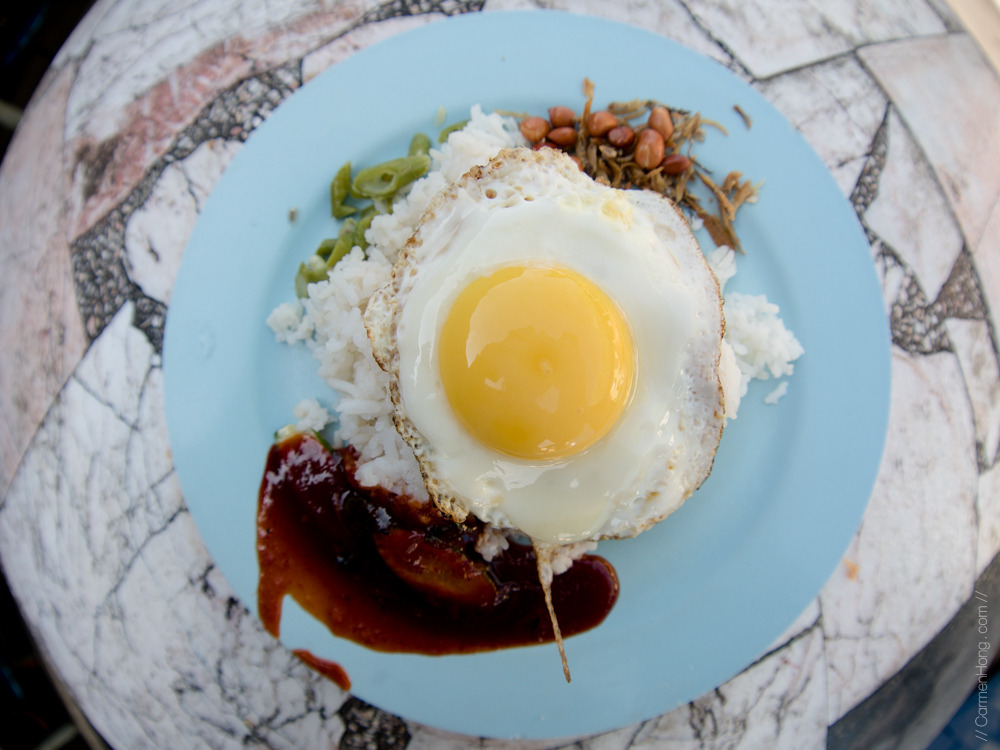 These were some of what we had for breakfast which to be honest was a rather huge let-down. Food was mediocre to say the least and it left me feeling rather incomplete. But to be honest, I didn’t know of any other locations for breakfasts and we were running out of time. So, we headed back to the apartment to get ready for check-out. 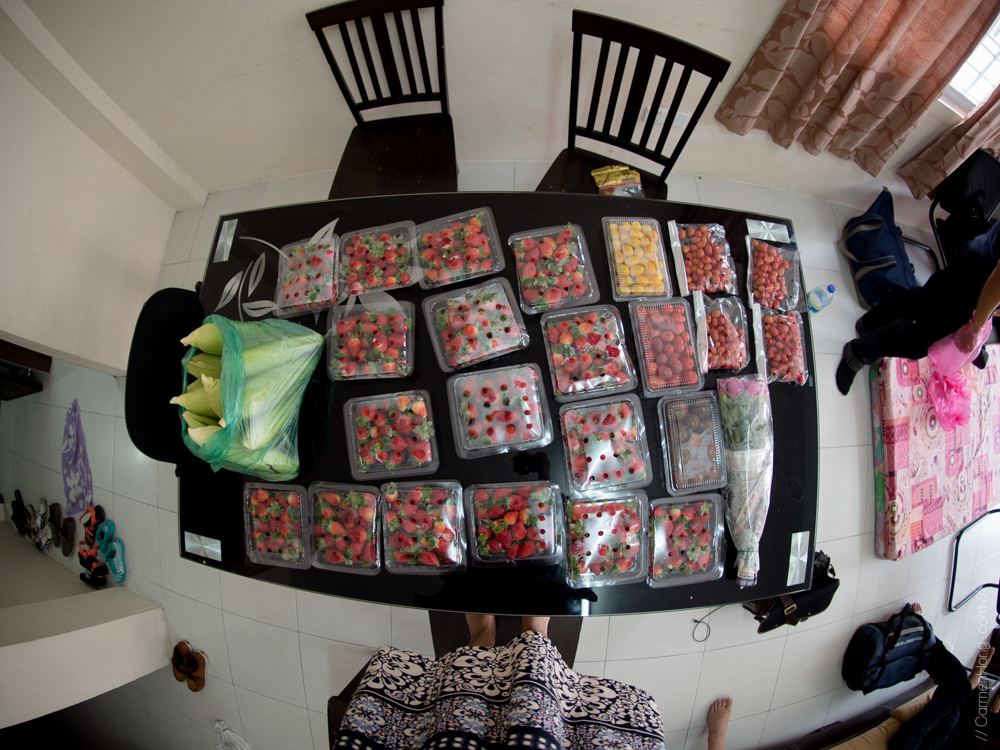 Initially we had plans to head to a strawberry farm and to visit a tea plantation. We didn’t because it was so jammed to get back up to the apartment. Instead, we ended up at a morning market in Brinchang because I wanted to get strawberries! And I bought two trays of strawberries for RM50. Unfortunately, because it was stuffed into the container, the strawberries were not able to be kept for days long after I returned from Cameron.
And yes, I bought sweet pearly corns at only RM15 for that one bag. Tian Chad and Robin got me some purple roses too, because I mentioned the day before that I wanted to get roses! Super duper sweet of them guys. 😀 The next time I’m in Cameron again, I’ll definitely going to buy more corns strawberries and even more vegetables!
Since breakfast was such a disappointment, I wasn’t going to head back home before feeding myself with delicious food. After all, we already drove this far. So, it was decided that we’ll head to Ipoh for yummy-licious food! I have been to Ipoh for foodtripping with my family, so I didn’t need to do any research on the places to eat. Plus, everything delicious is within close proximity from one another. 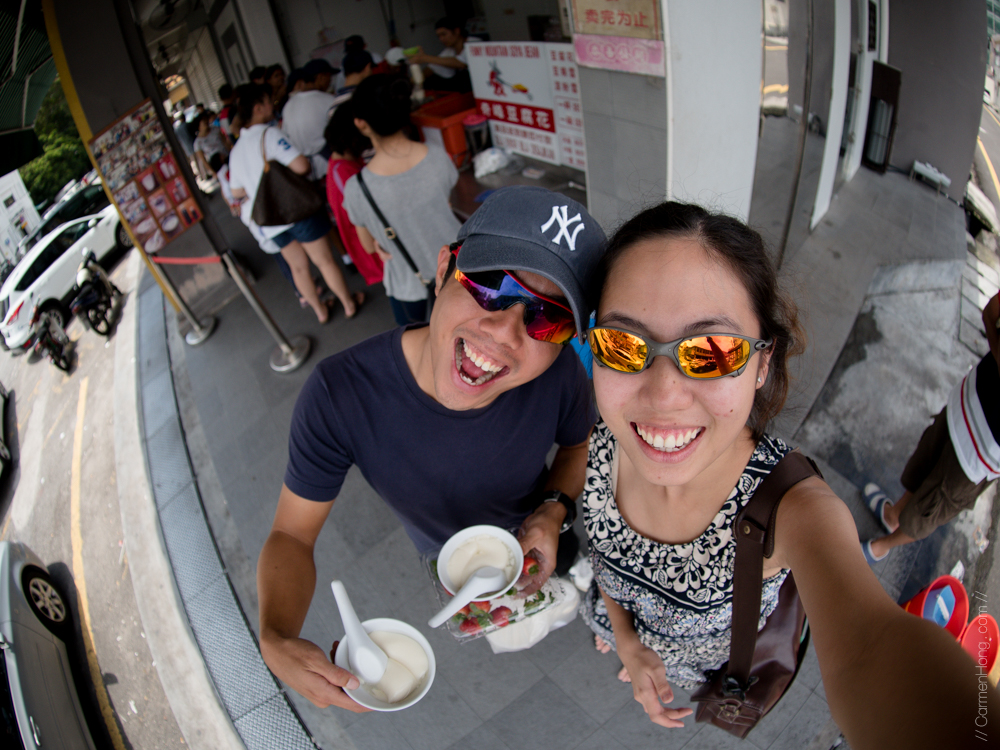 First stop was the famous Funny Mountain tau fu fah, which was extremely packed with people and there was a long queue. There was even a drive-through option. I took one scoop of the tau fu fah and to my surprise, the texture was not as smooth as the ones I have back home. Meh, that was rather disappointing. My favourite tau fu fah are the ones from OUG morning market where it’s so smooth, it can cause a car accident if you ever spill it on the road. That was what Calvin said, actually. 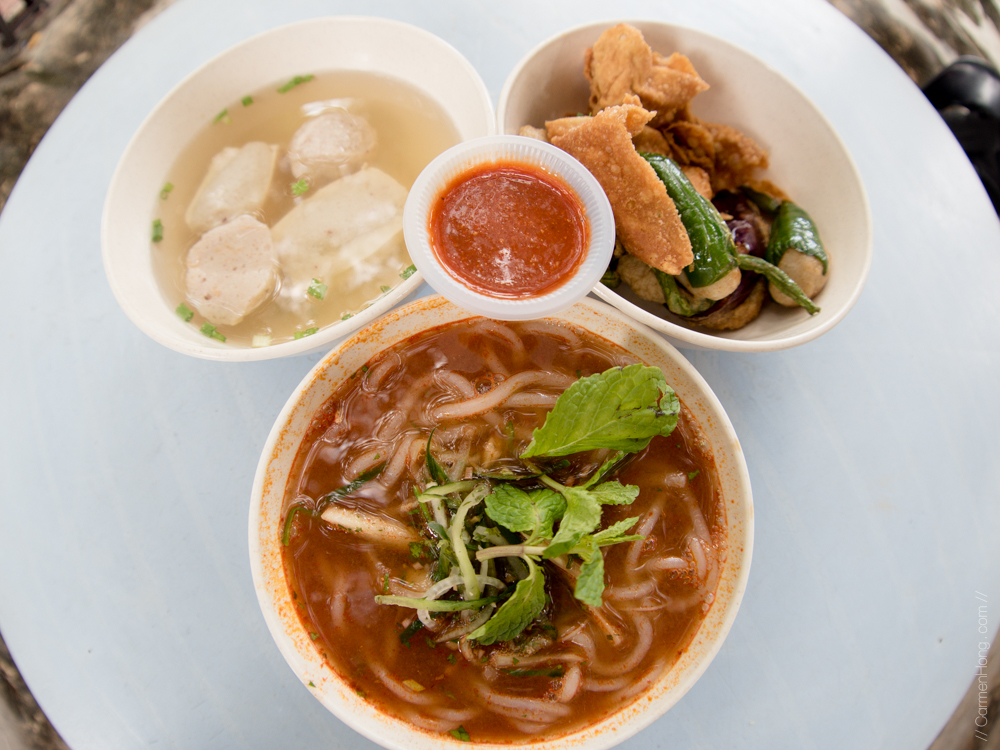 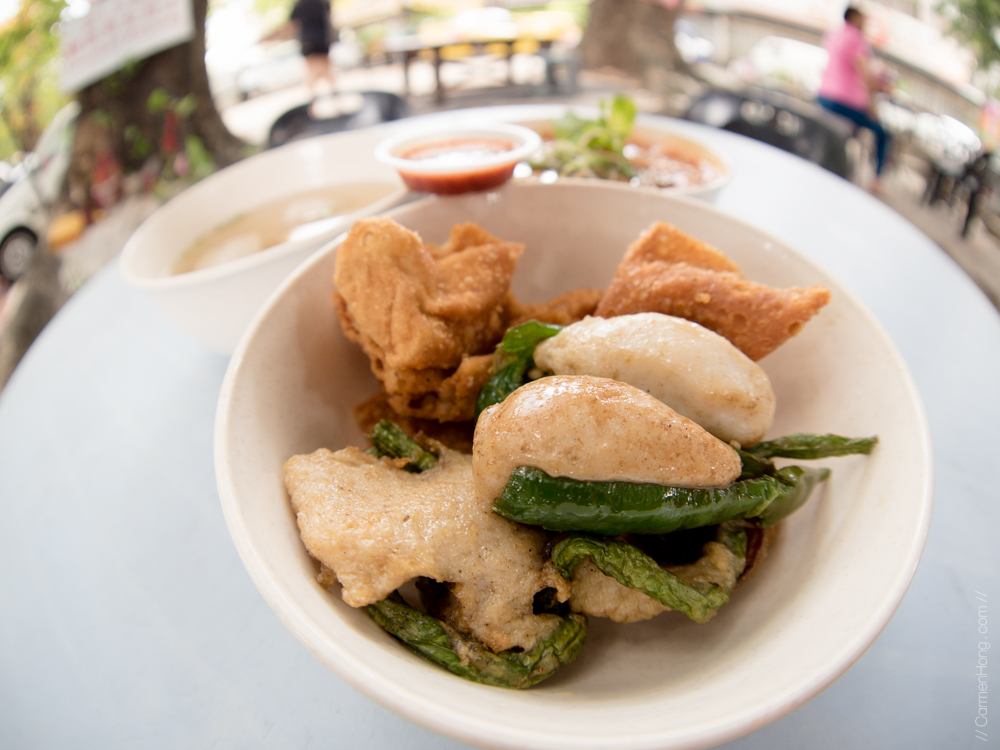 After Funny Mountain, we headed over to Pasir Pinji (which is still within Ipoh) for some yummy delicious yong tau foo, mua chee and rojak! The first time I was in Pasir Pinji, I tried the neighbouring yong tau foo stall and was severely let down by the mediocre food. The whole food court was filled to the brim, which let me to assume that the food must have been amazing. It was the exact opposite, so this time I tried the stall next door which was better! The laksa packed a punch and goes surprisingly well with the yong tau foo. 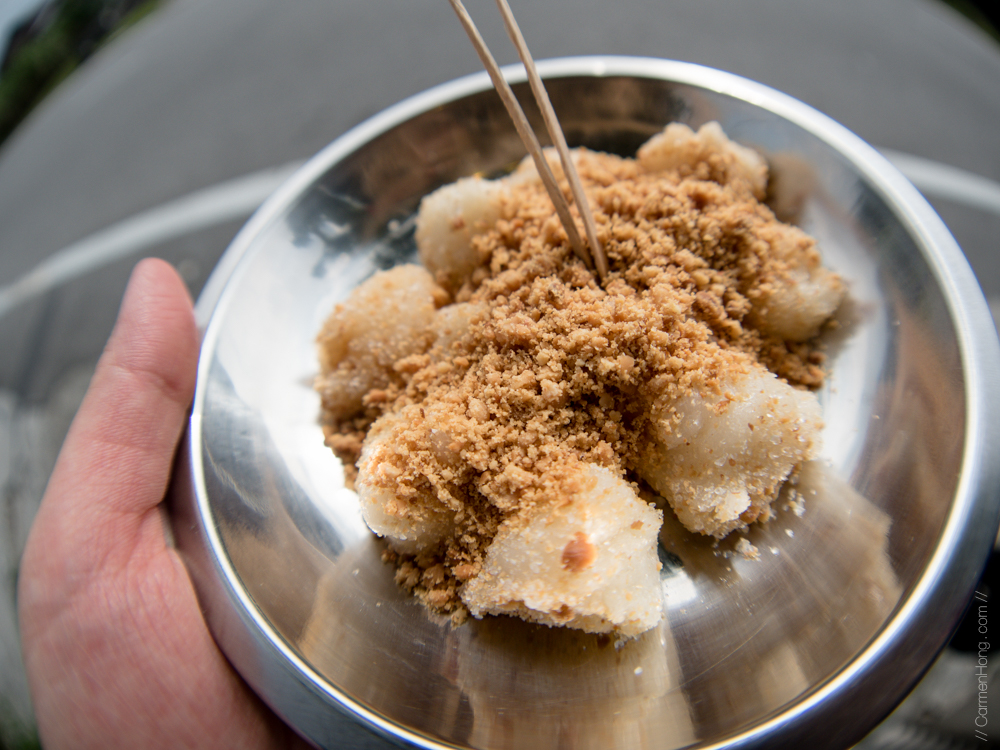 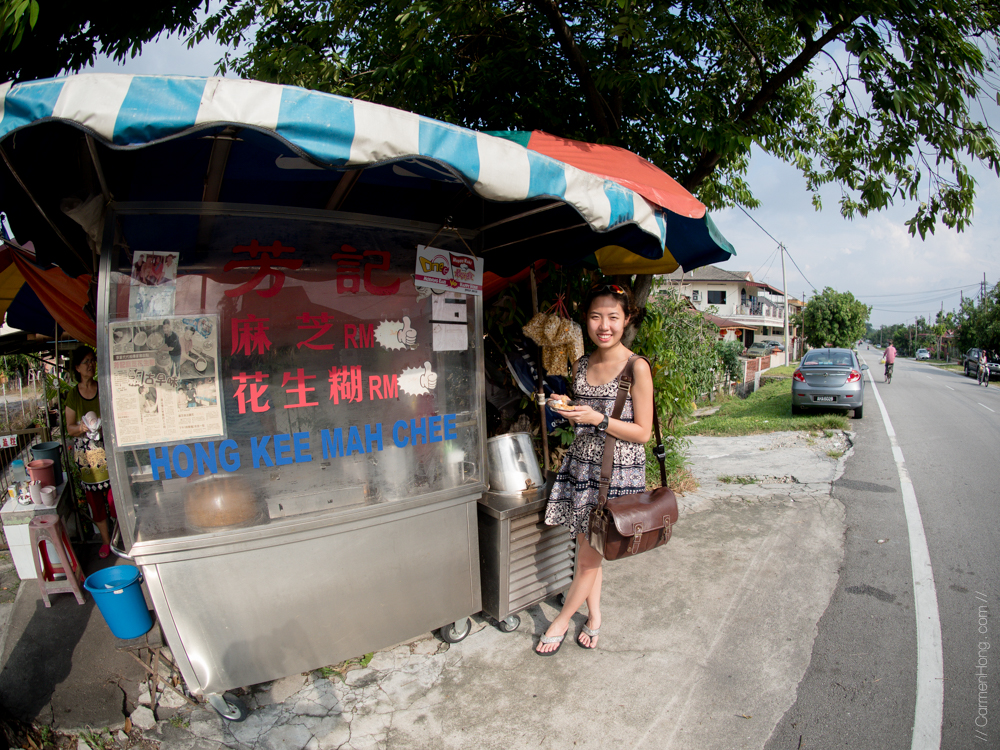 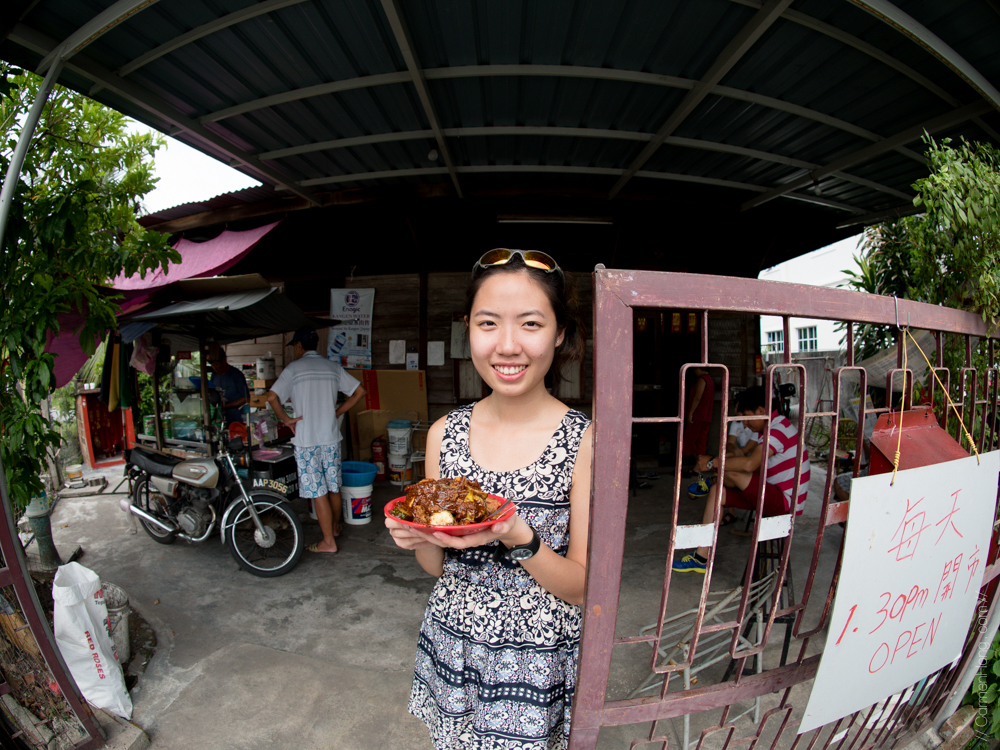 The mua chee was chewingly tasty, but was slightly overpriced at RM3 per plate. Put that in comparison with the plate of rojak for just only, RM5. The rojak will leave you craving for more with every bite, with hints of lingering spicyness. Having tasted the best rojak ever in my life here in Pasir Pinji, everything else falls flat. Thank you for graciously ‘ruining’ my taste buds.
And with that, it marks the end of my short but packed road trip with some of my lovely friends and photographers! As of the time of writing, we will be planning another trip to shoot the milky way and of course, I’ll make it a food-tripping journey along the way. Anyone who is up for that, do drop me a message and we’ll see how we can plan this!
* * * * * * * * * *
The pictures in this post above are solely taken with the Olympus PEN Lite E-PL7 and Olympus M.Zuiko ED 8mm F1.8 Fisheye PRO. No other cameras or lenses were used. :p Except the picture below, which was taken using Calvin’s camera. 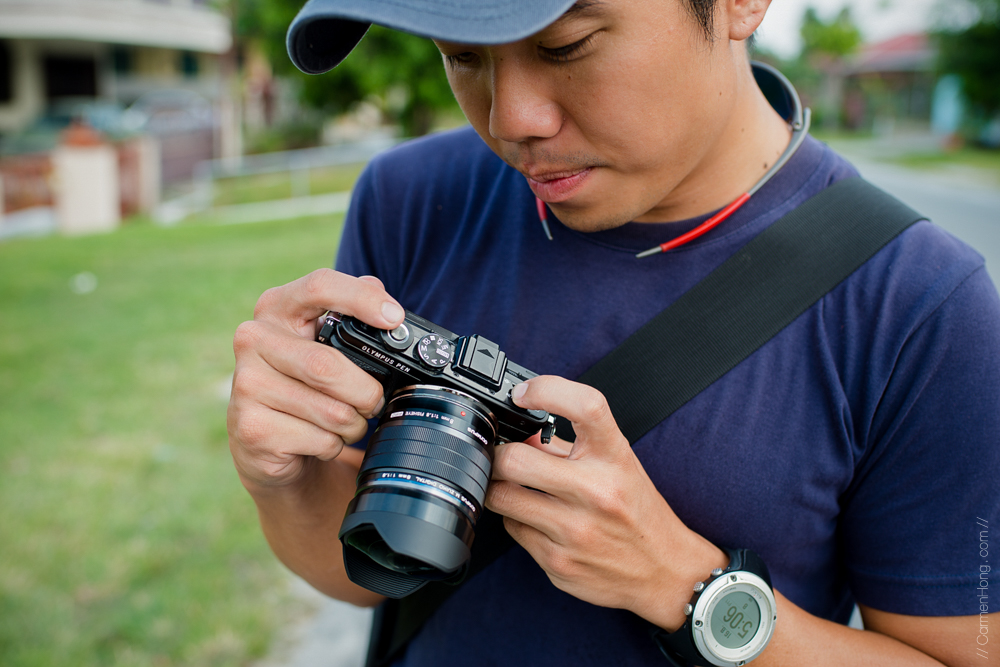 Out & About: Taking that leap towards fitness!

Out & About: Maybank GO…