As I am typing this, I still can’t decide on a suitable title for this post. It was shot around Petaling Street and the neighbouring streets, but about half of the pictures this time are taken in Sri Mahamariamman Temple. As I have other pictures as well, I could not just title this post as just the temple name. I have only started shooting on the streets recently, but I realised that my pictures would so often be in black and white, or almost muted colours. You can check out my other Street Photography pictures.

This time around I have decided to go for colours; brilliant, vibrant colours. It feels awesome to think that when I was shooting, I never had any particular theme in mind. But as I was post-processing the pictures, somehow I opted for colourful edits instead. 🙂 I hope you’ll enjoy the set as much I do.
* * * * * * * * * * 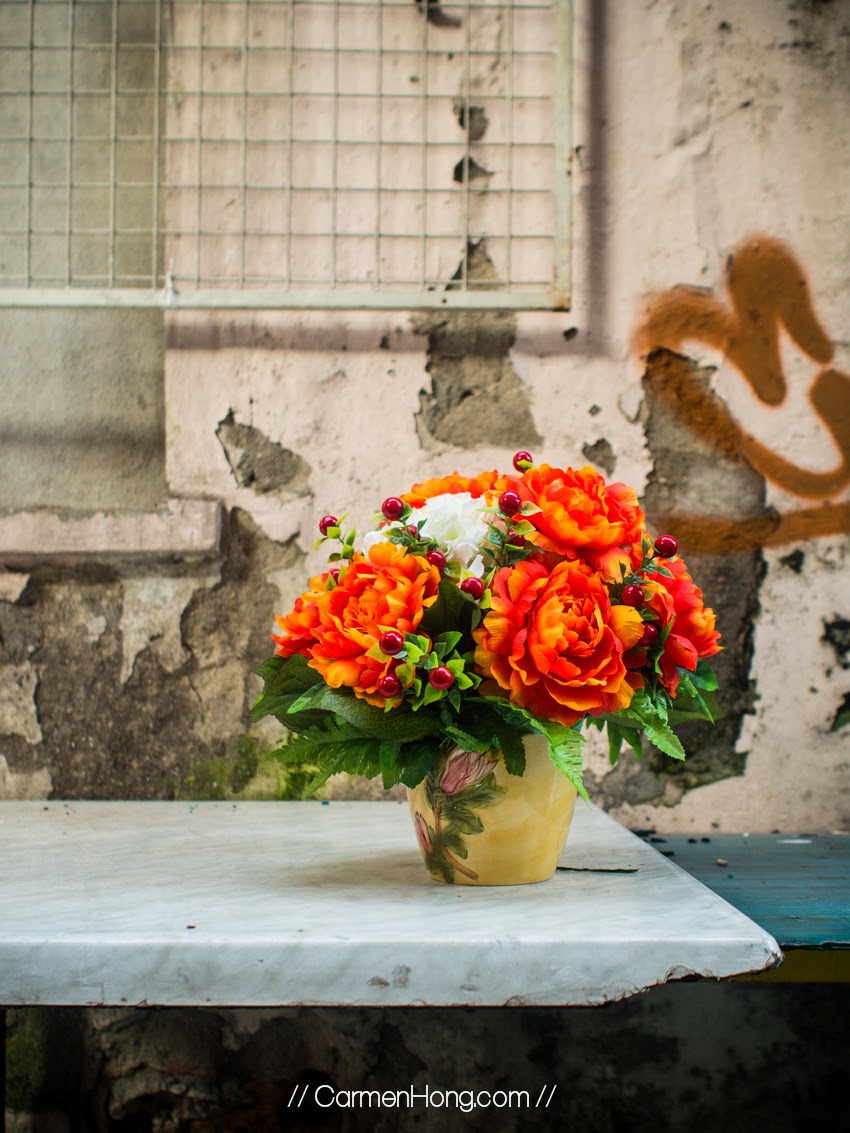 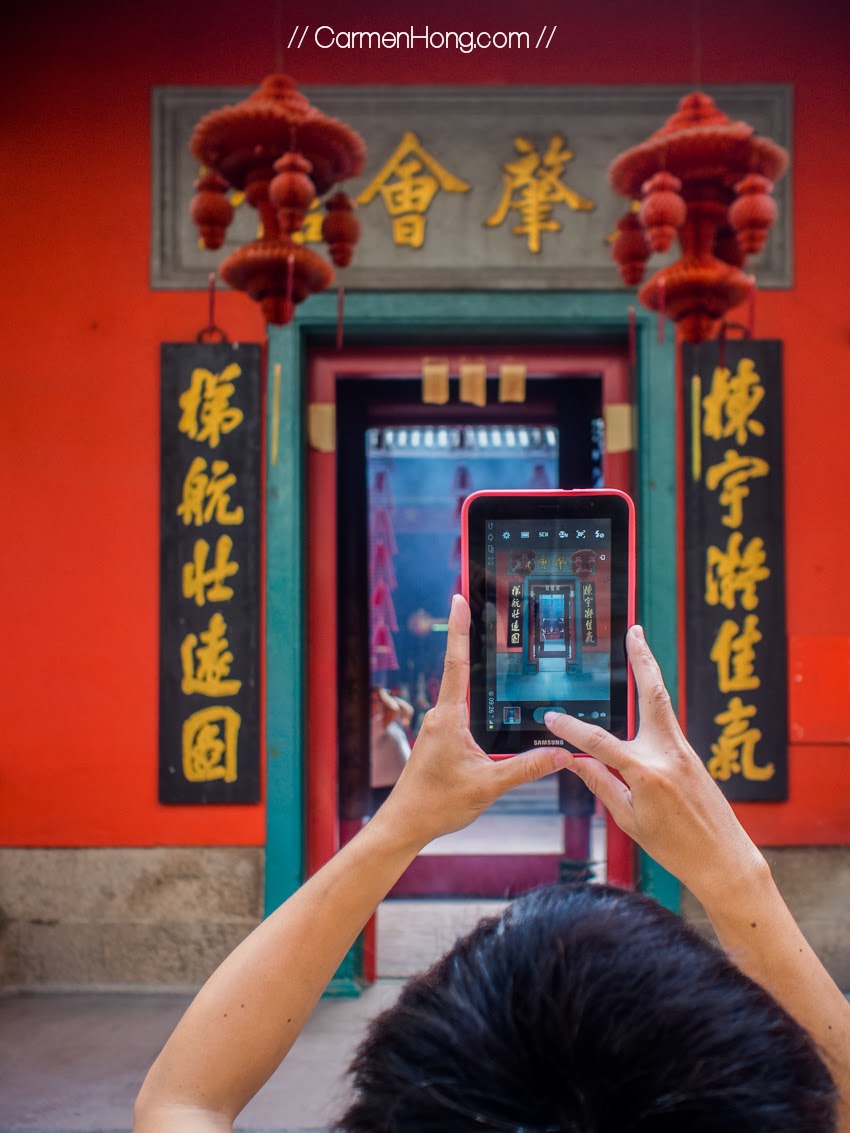 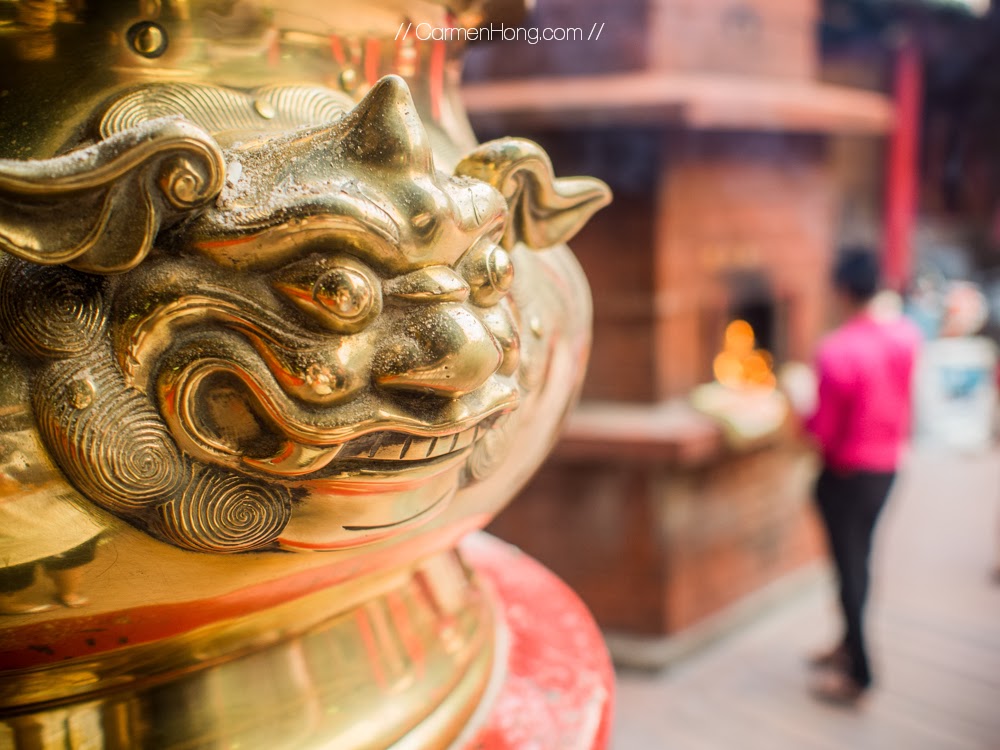 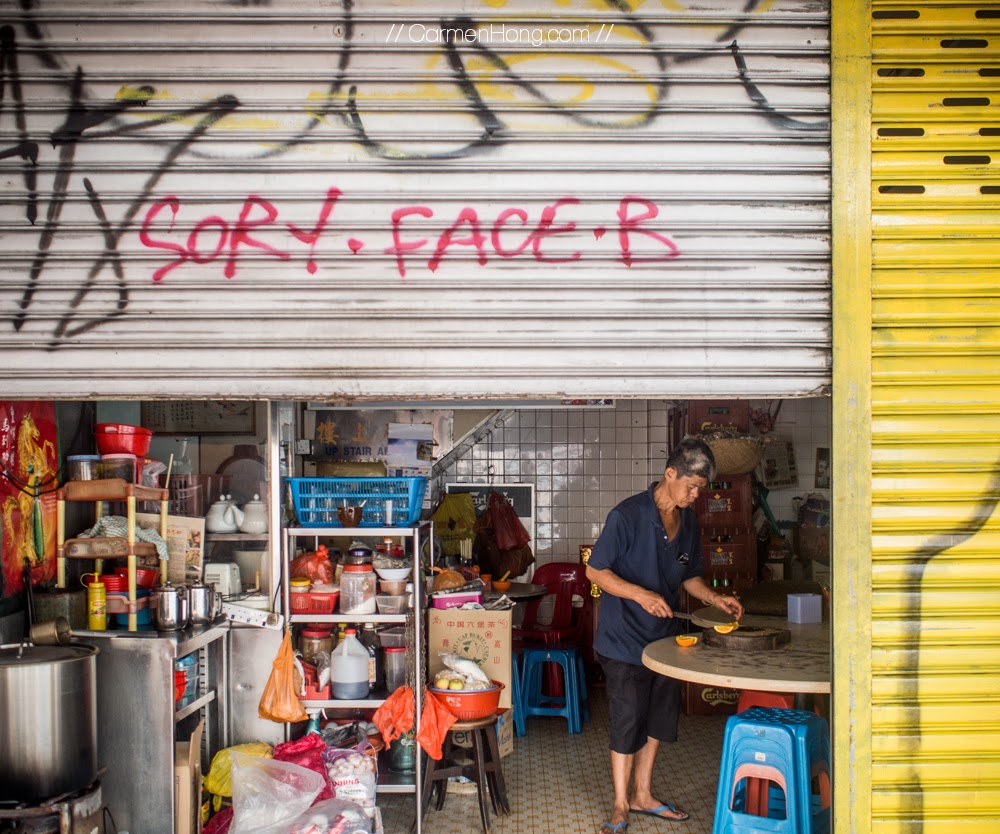 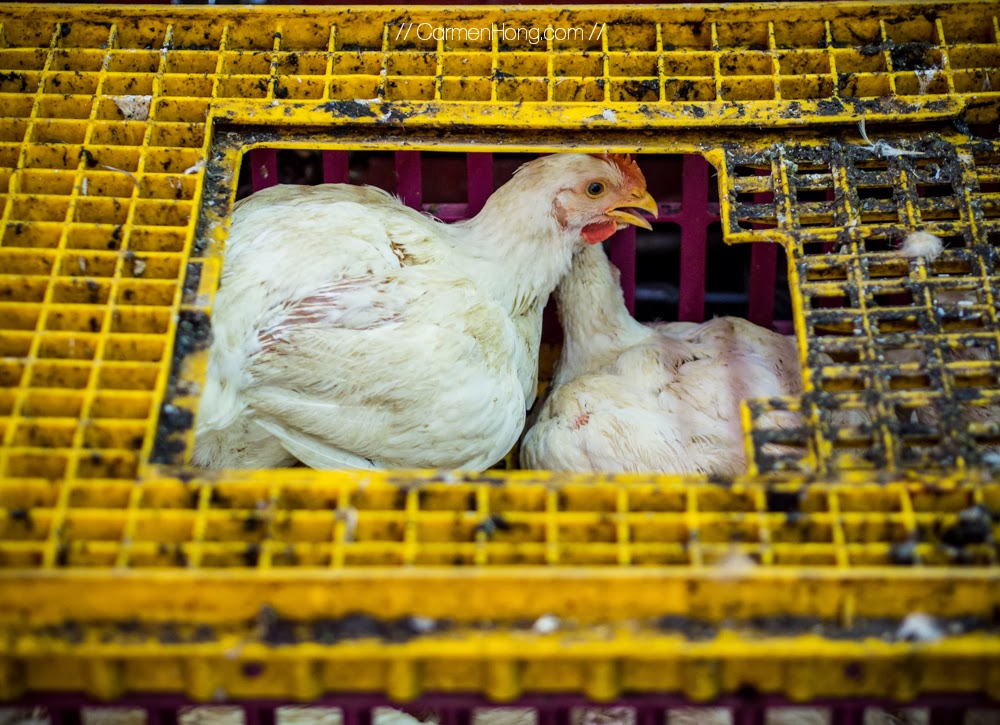 And the pictures from here on are taken from the Sri Mahamariamman Temple. 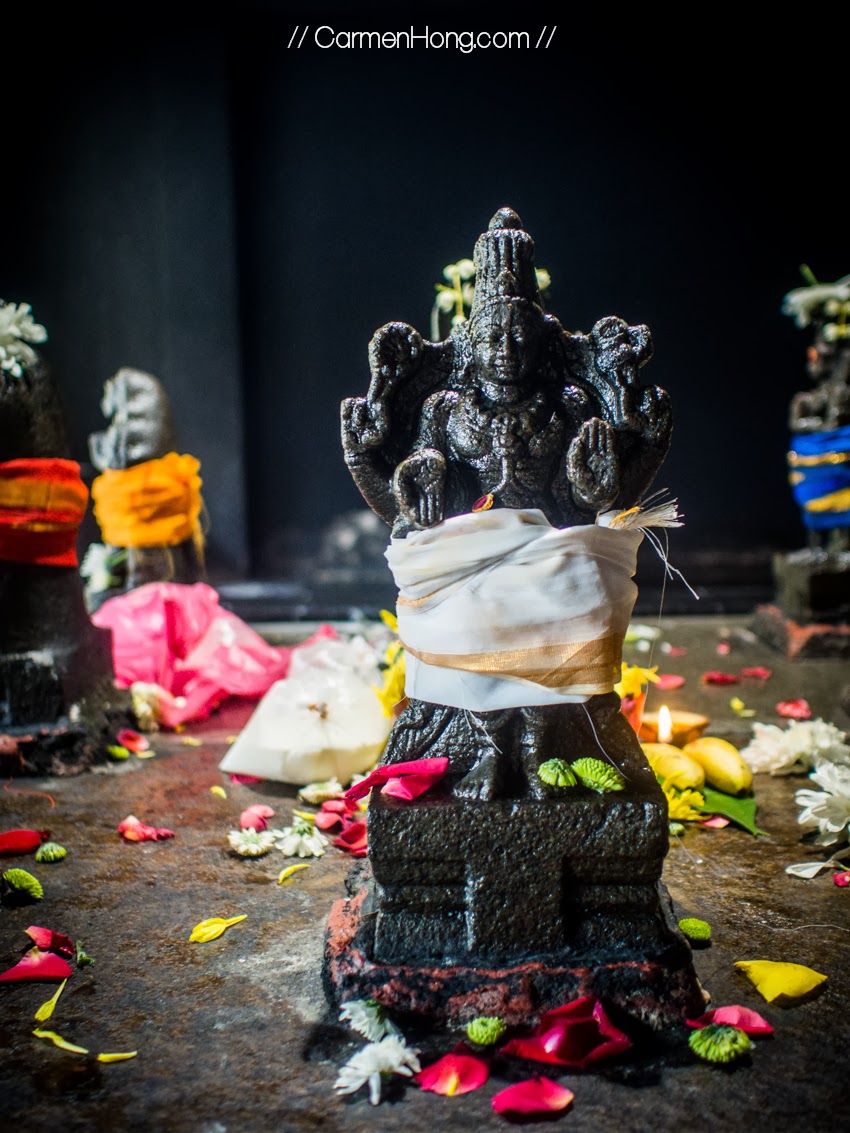 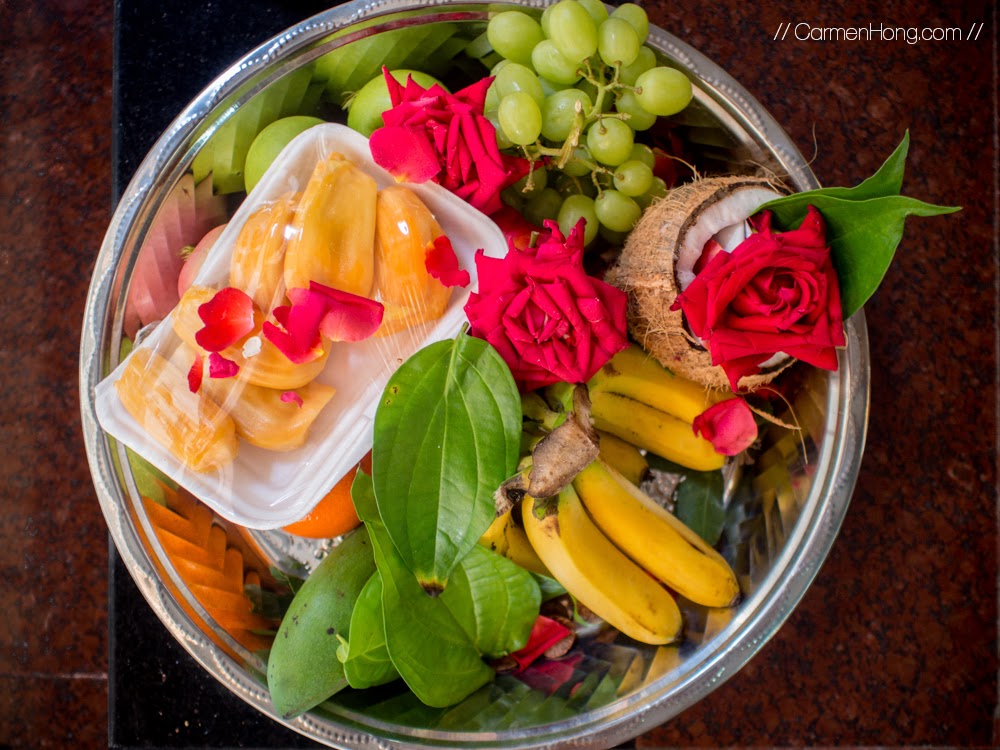 I’m not too sure what these are, but they appear to be offerings, which will be blessed and then, you can take them back. This is just my assumption, because I saw people holding it and they didn’t exactly place it near the gods. Anyone can help to clarify? 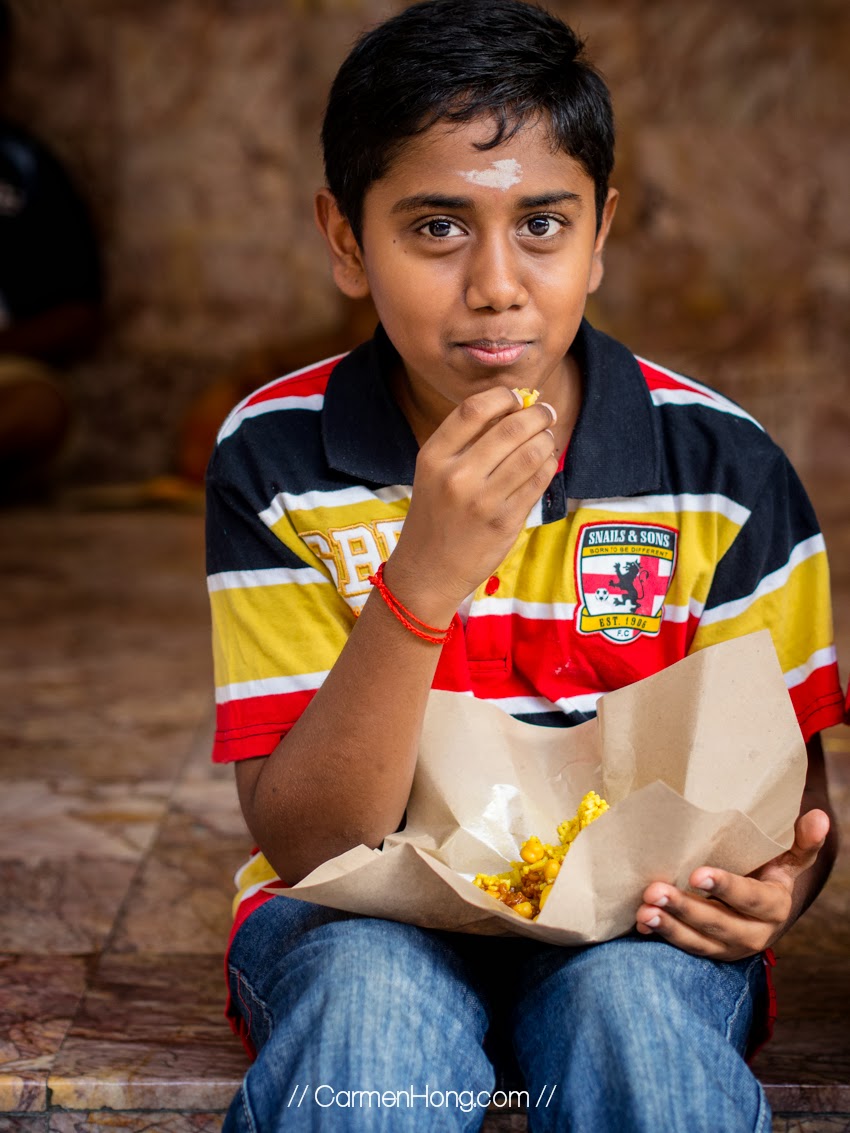 I think there were a ceremony on the day we were there because there were vegetarian food served there too. 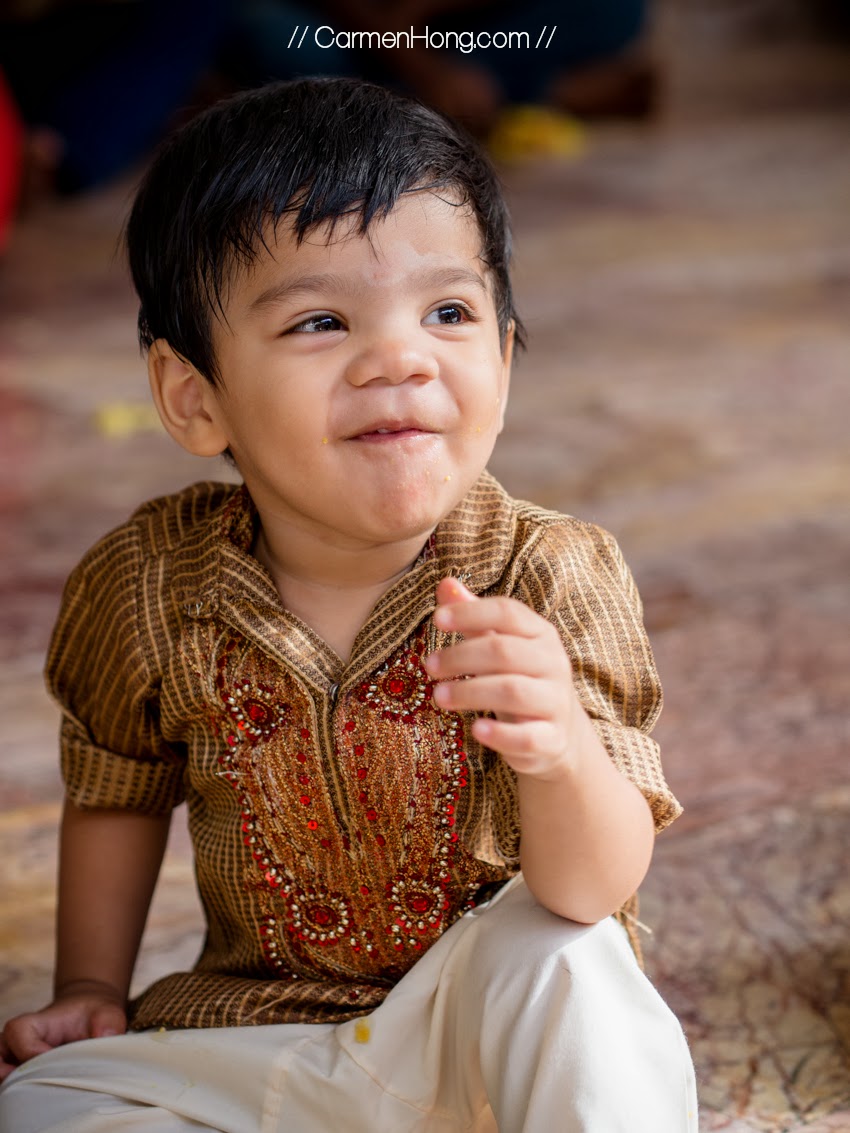 And here is an adorable boy who caught my eye because he was so happily chasing pigeons around the temple, which made it hard to photograph him. Luckily though, his grandmother sat him down to feed him. More about him below. 🙂 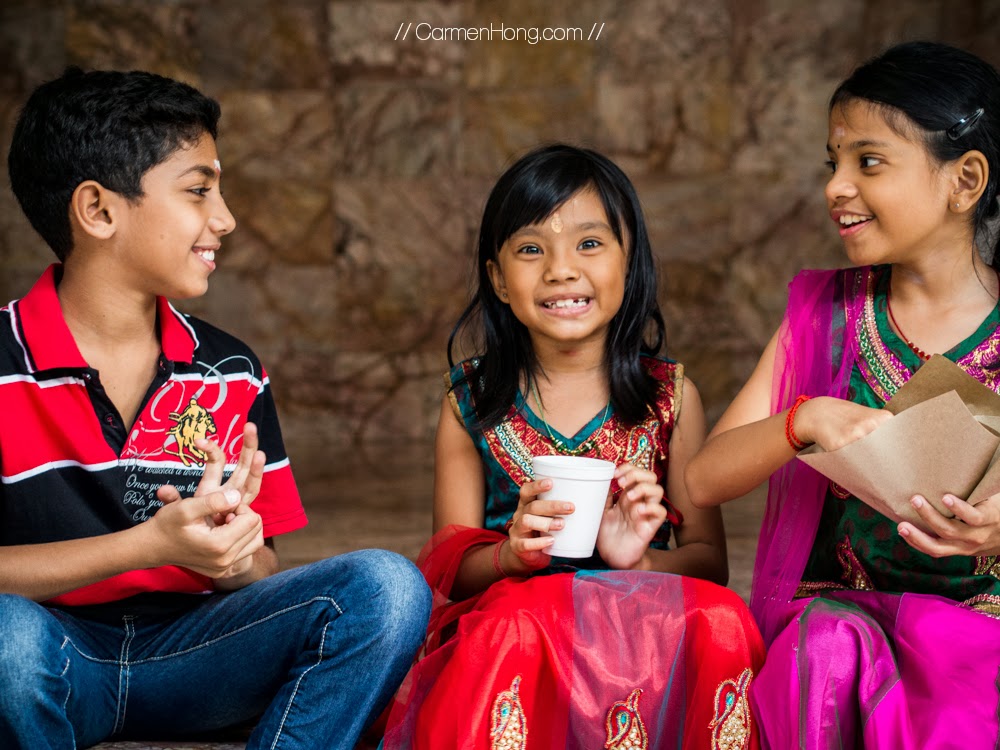 It made it all the more adorable because these kids knew we were photographing them and they were conscious, shy but yet they were curious too. There was probably a little joke within them about us, because they kept smiling sheepishly. 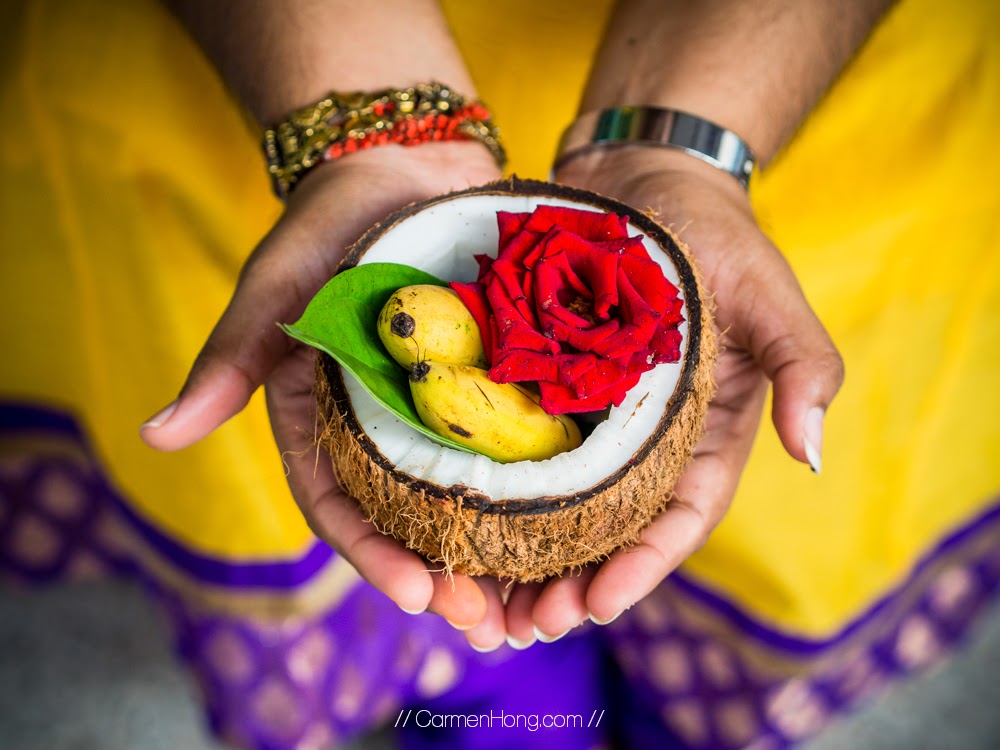 And here is my favorite picture from the walk. Actually, I asked the pretty lady if I could take a picture of her, and then I saw the colors, I was smitten. I had to take a picture, and the combination is just lovely. 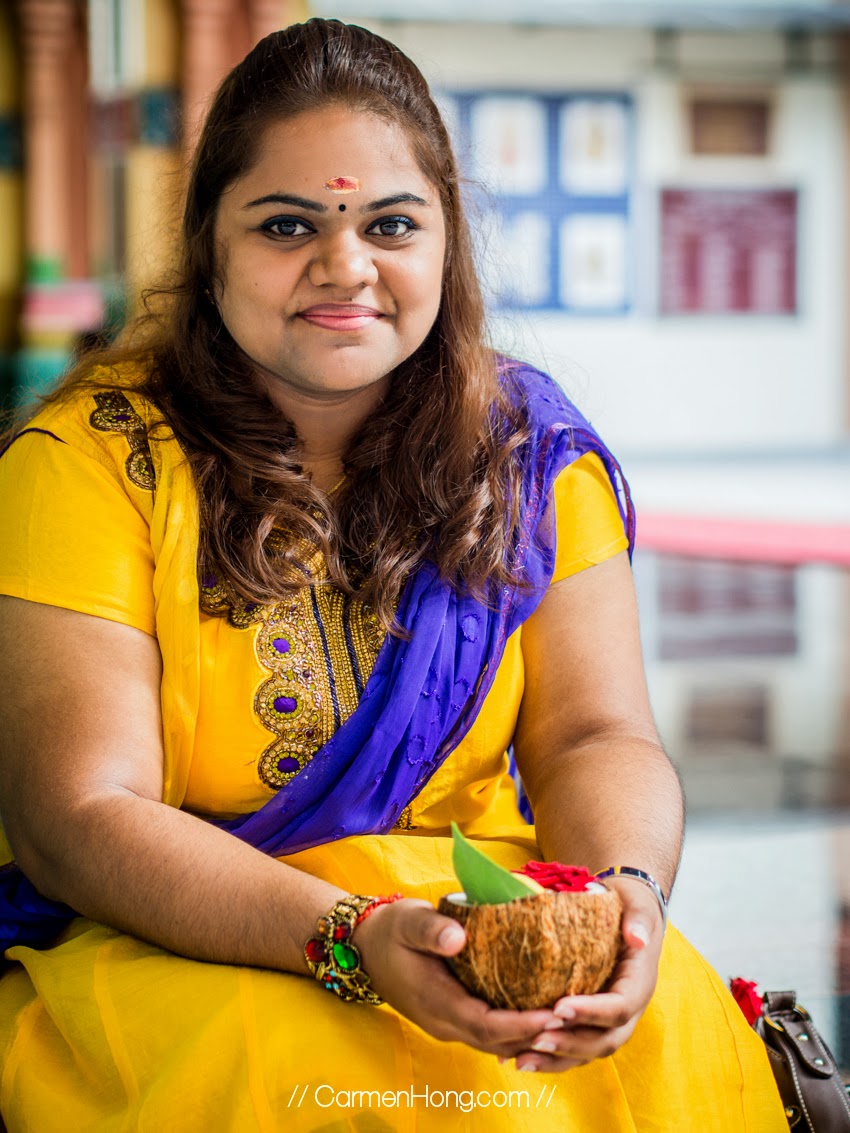 And now, meet the pretty and sweet lady.

* * * * * * * * * *
Honestly, Petaling Street is not really one of my favourite places to shoot especially for street photography. It is often crowded and people are just less friendly here, because everything is so commercialised. It is a tourist attraction, so that much is expected. I did not manage to do more portraiture as I would have preferred on the streets, but I did managed to photograph the children in the Indian temple. 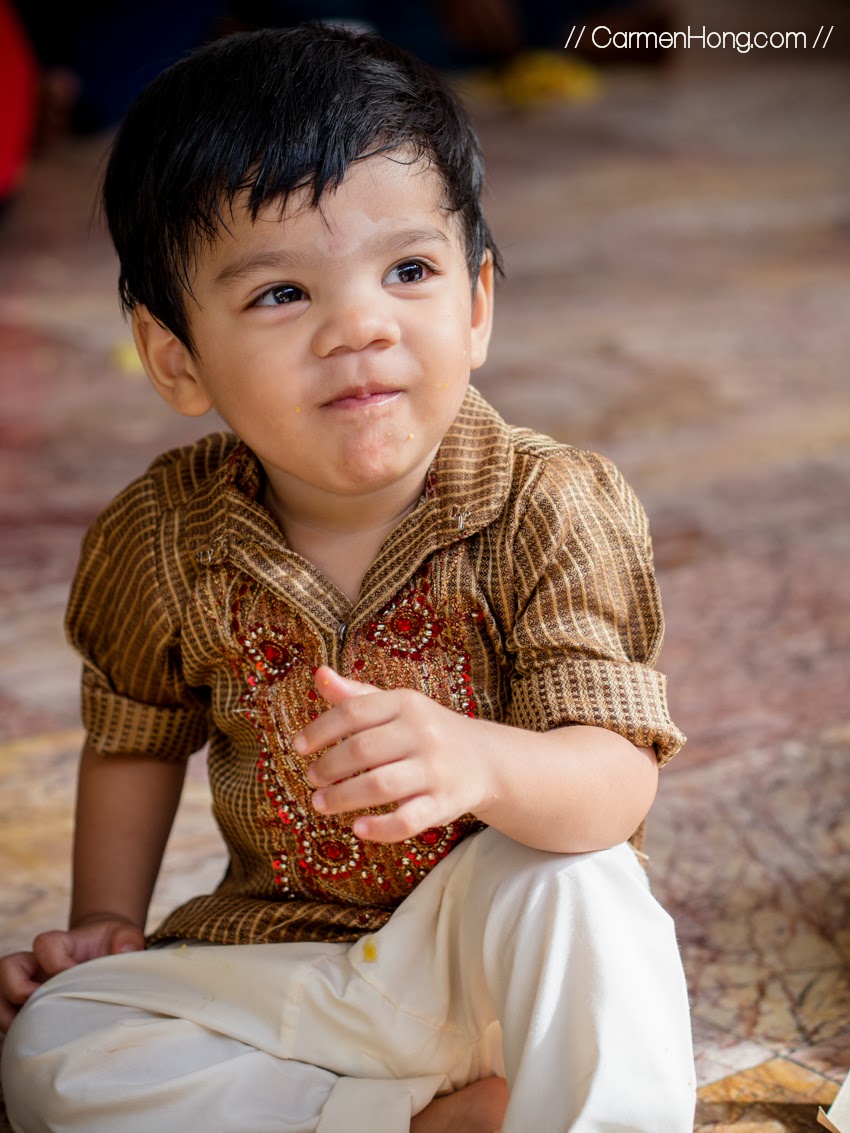 Of all my subjects, I actually think I love photographing kids. Haha. But this boy here wasn’t always so happy to see us, (in this picture I think he was looking at Robin).
The children were especially friendly, some a little shy but they smiled for us nevertheless. The best part was probably how encouraging their parents were; they were nudging their kids to look into our direction and asking them to smile for us. These were the little things that I find joy in during my street walks, to meet such lovely and heart-warming people. 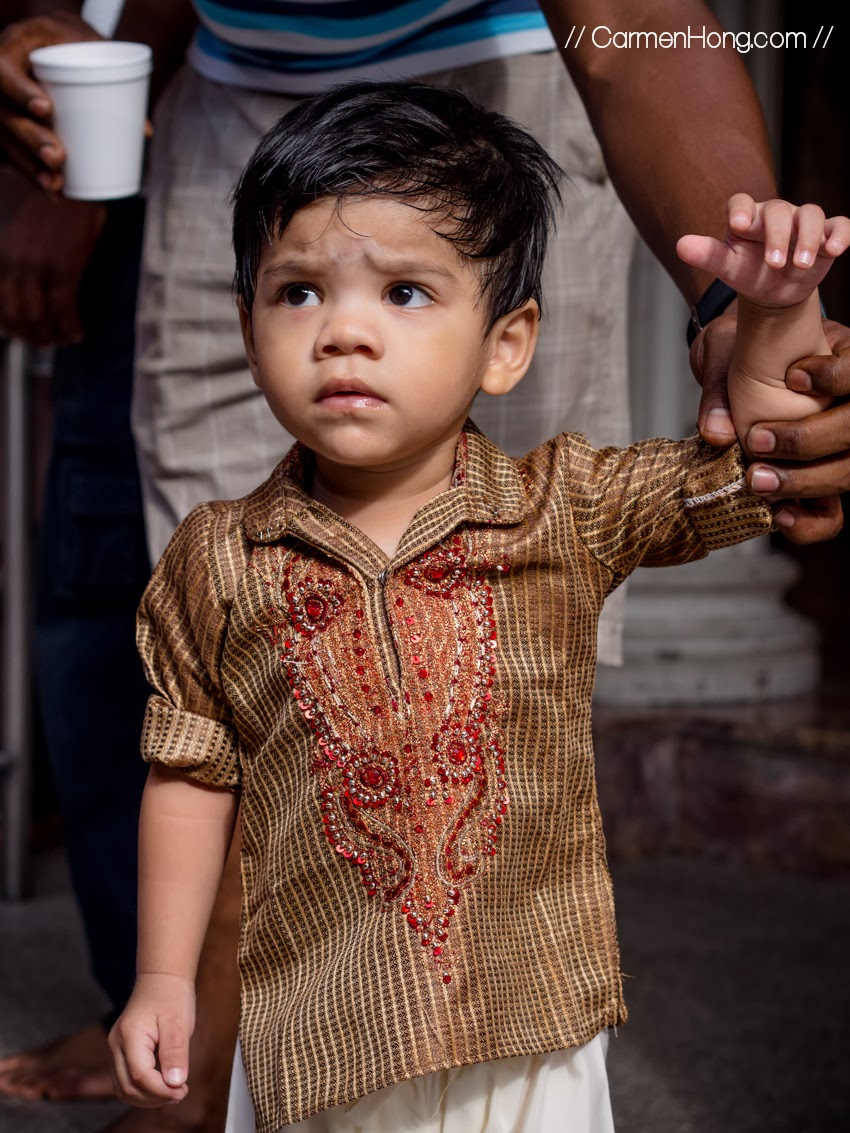 This was his extremely confused look when his parents asked him to stop chasing pigeons and to look at us. He look bewildered, probably because suddenly he had three strangers pointing cameras at him. 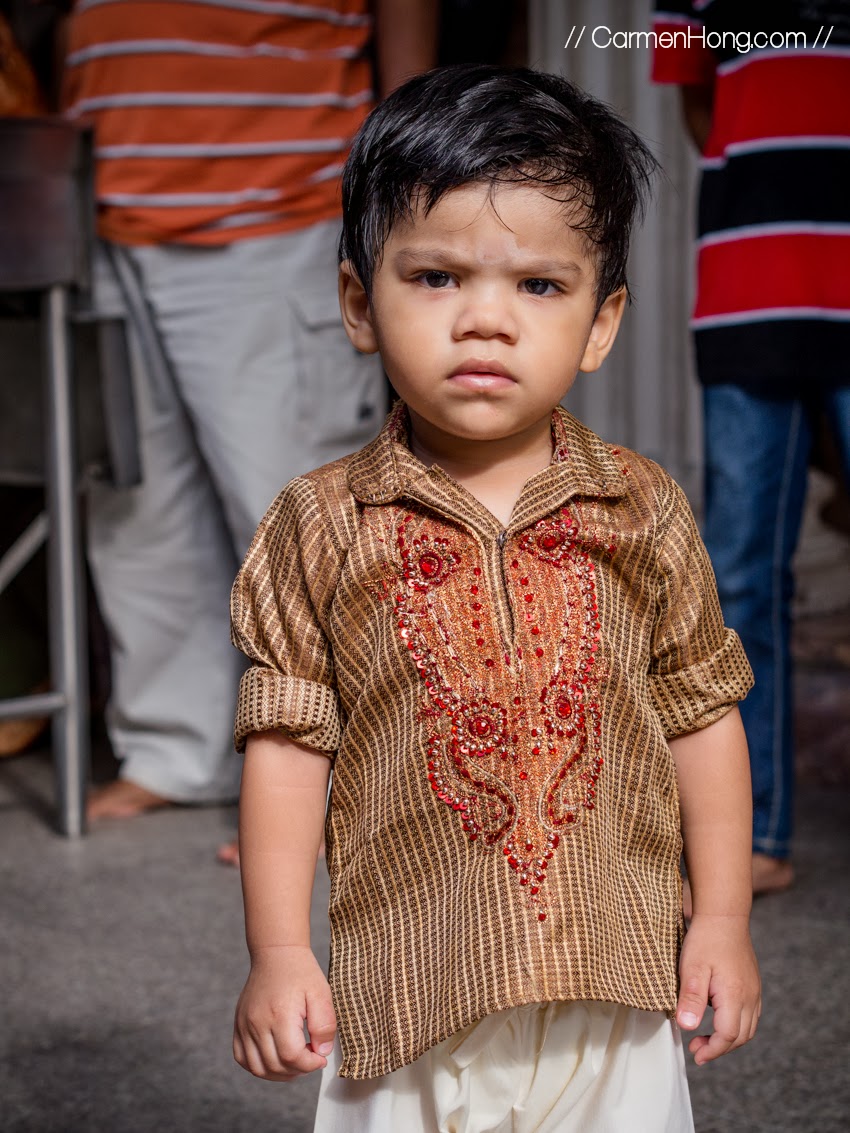 Then, he looked my way and decided to give me the *death* stare. Haha.

I was personally expecting more from myself from this shoot, because I had certain expectations and pictures I wanted to take. Like more portraits, but of course, I’m pretty much still shy to approach any interesting subjects. This time, I was shooting alongside Robin who could effortlessly approach and shoot a friendly face. Up till now, I am still amazed with how he does it. Jackie was there shooting with his Olympus EM-1 and Olympus 45mm f/1.8 ED M.Zuiko Digital. We also had one of Robin’s reader from US joining us for this session.

* * * * * * * * * *
I know this post is titled as embracing colours, but these two pictures were stood out more in black and white. In the first picture, you’ll see a homeless man and in the second, you’ll see a black, gorgeous dog all chained up. 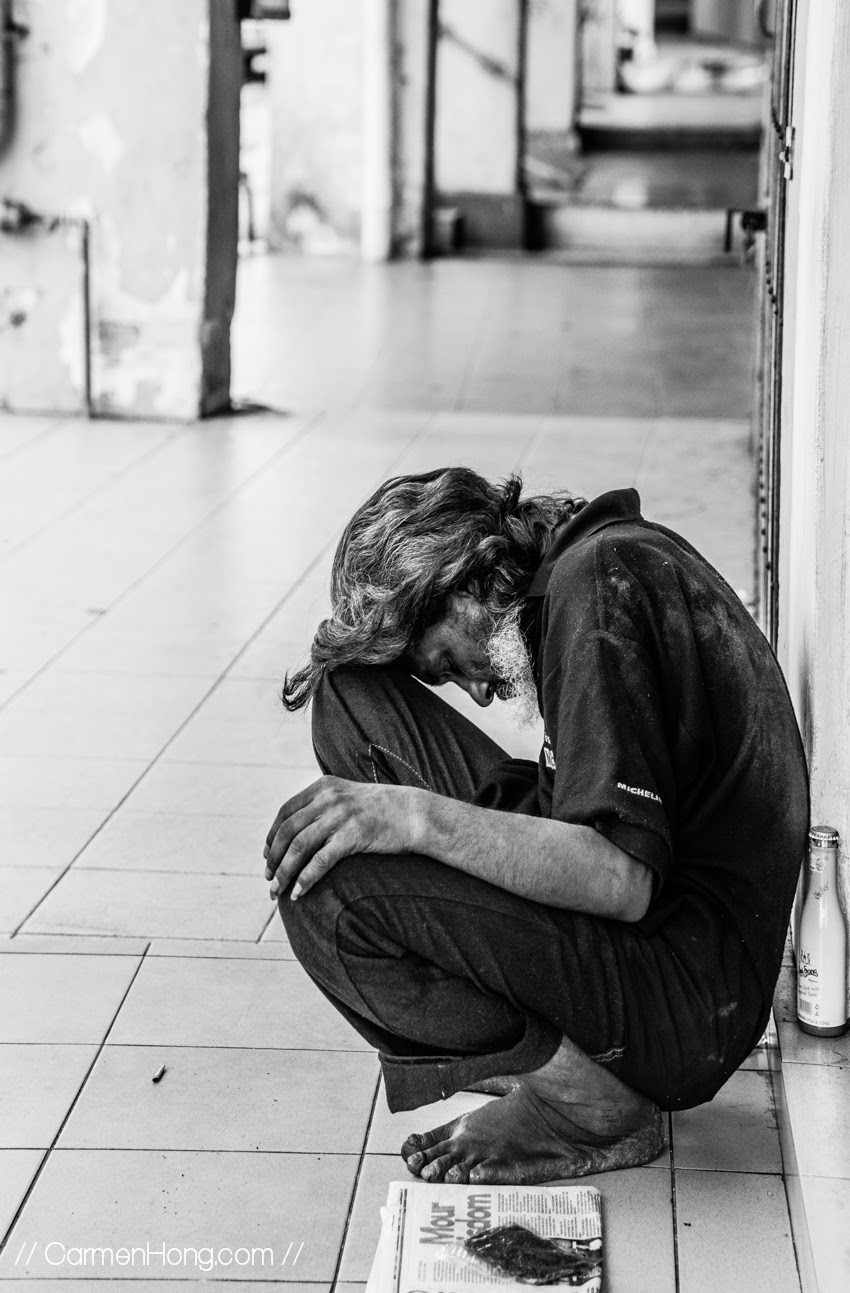 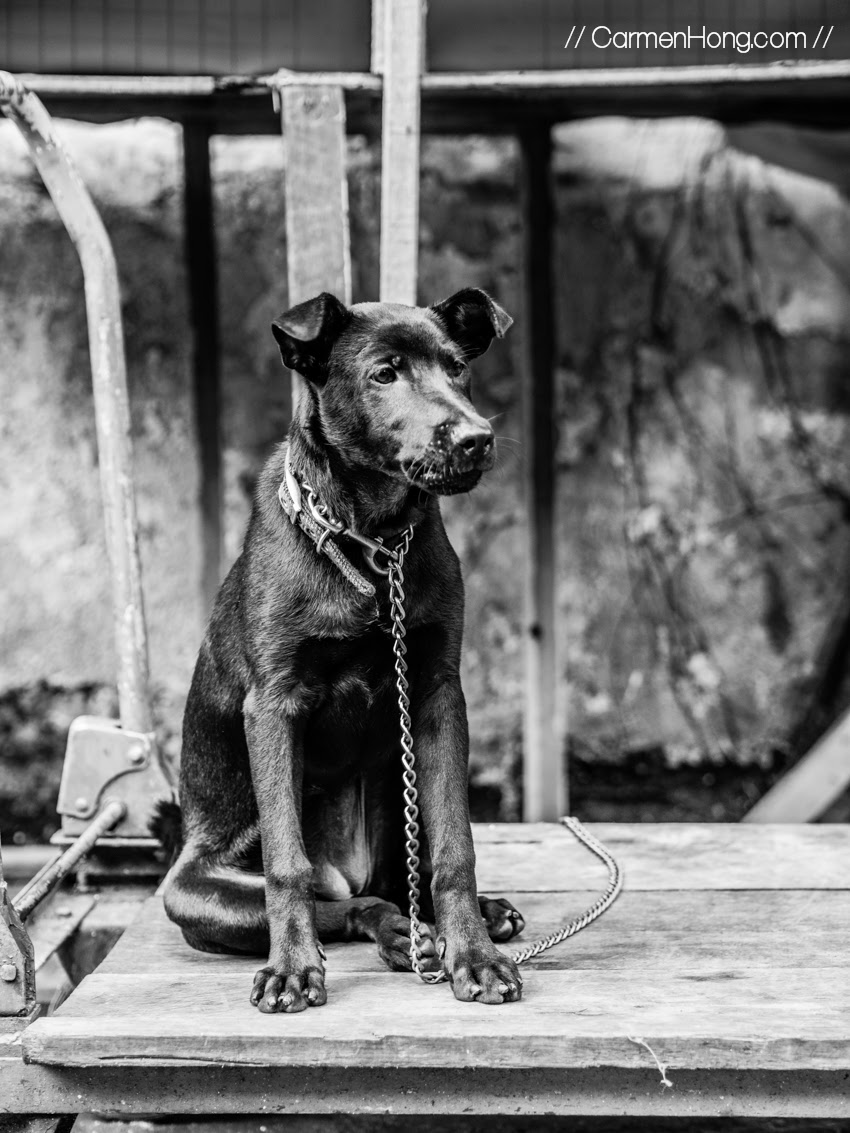 “The two pictures are a contrasting image of one another. The dog is well taken care of, with sufficient food and all. But alas, he is chained up. The one thing he doesn’t have was freedom. And that was the one thing the homeless probably had, he could move around on his own freewill. But food and care was what he lacked of.”

PS – I was going through my blog when I stumbled upon another photo walk I had in Petaling Street earlier this year, March 2013 to be exact. We visited the same places like we did for this session. I was even shooting with the exact same lens, the 45mm. The only difference was I was shot with my own 45mm lens and with the Olympus EPL5. How time flies. Read it here; https://carmenhong.com/2013/03/rage-photo-walk-2013-petaling-street.html and you will probably see my improvement from then.

PPS – I’m still working out the kinks for my watermarks, it’s so annoying how the portrait ones look different than the landscape ones. But which would you prefer?