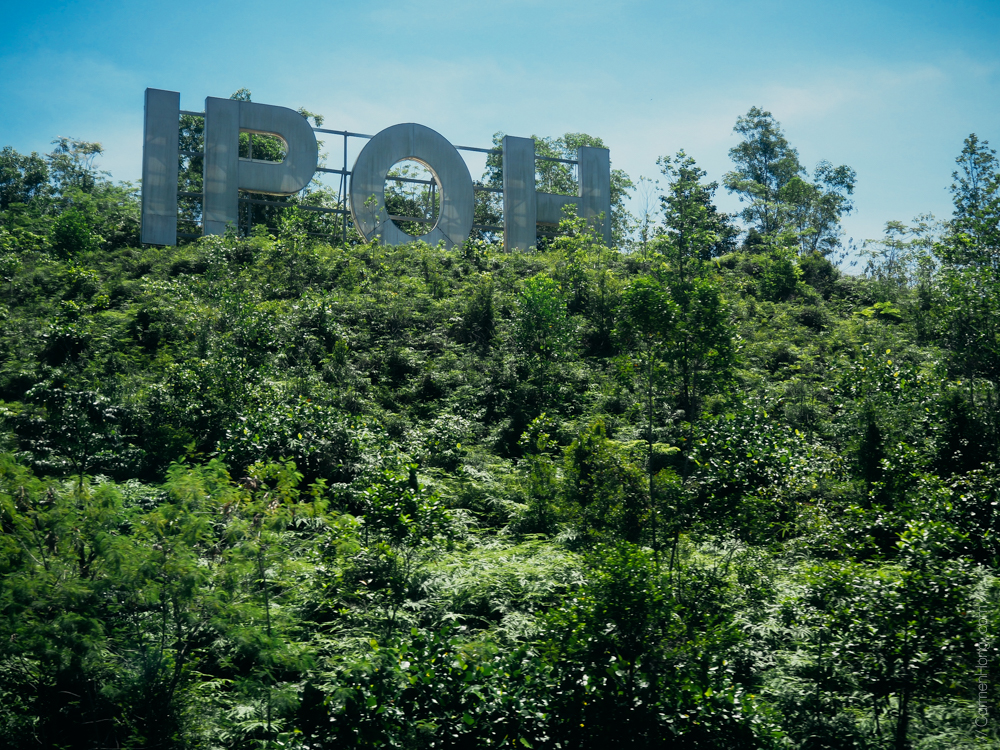 It’s been a while since I last went for a shutter therapy session with the boys, I think by now it would have been months. It’s a shame when I come to think of it that I don’t find/make enough time for something that I so clearly miss and is passionate about. But try as much as I could, I cannot really make the time to do it. Now, if you’re new and just picked up photography you’ll want to avoid getting too long of a hiatus from shooting because you’ll find that your creative perspective may take a hit from this break. At least to me, that was what that was happening. It can be rather de-motivating, to say the least. 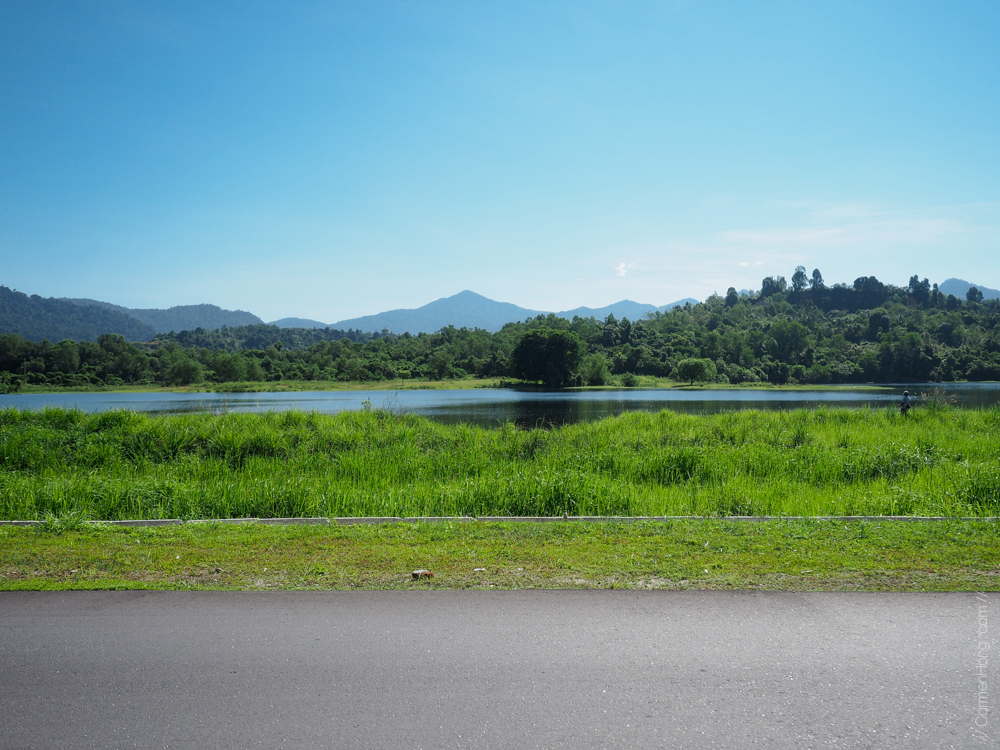 What helps though to ignite that passion again is new sights and sounds, even a simple trip out of town would help. The fresh change in the scenery would be a warm welcome for you. Since there was along holiday in May, I suggested to my parents that it’s time to head for another one of our gastronomic food road trips again. Do you remember the last few edition(s) that I posted about my road trips around Malaysia?
There was the;
Initially, the plan was to head to Sg Lembing for the May holidays but as it turns out the place was fully booked and so, we ended up heading to Ipoh instead. I have been to Ipoh on another food trip with my family before and that time we visited Ipoh and Taiping together. Taiping was a rather huge disappointment and hence, this time around Ipoh would be our main place of attraction. 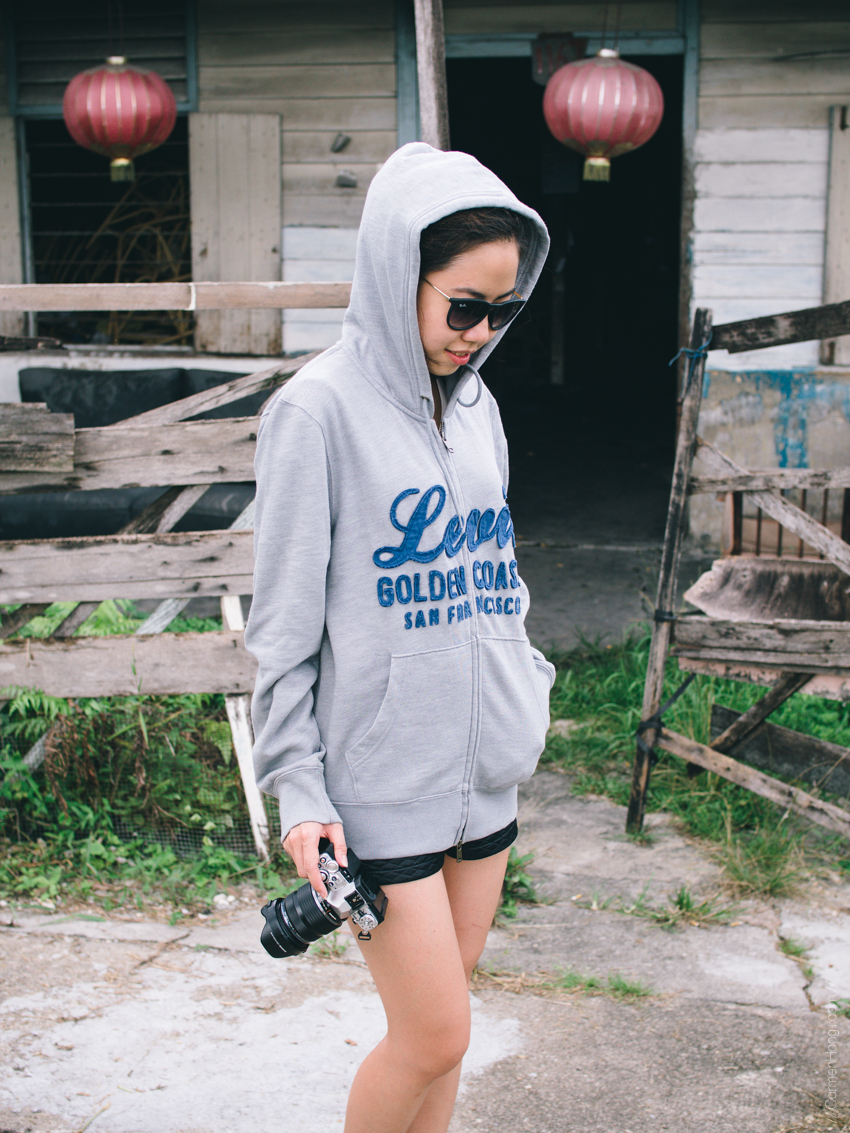 For this trip, I decided that I was going to get my photography mojo back on and I’m lucky enough to have the Olympus OM-D E-M5 Mark II together with the Olympus M Zuiko Digital ED 12-40mm f/2.8 PRO lens to bring with me for this road trip. I actually haven’t shot/played with either one of the two gears, so I was pretty pumped to test these babies out. 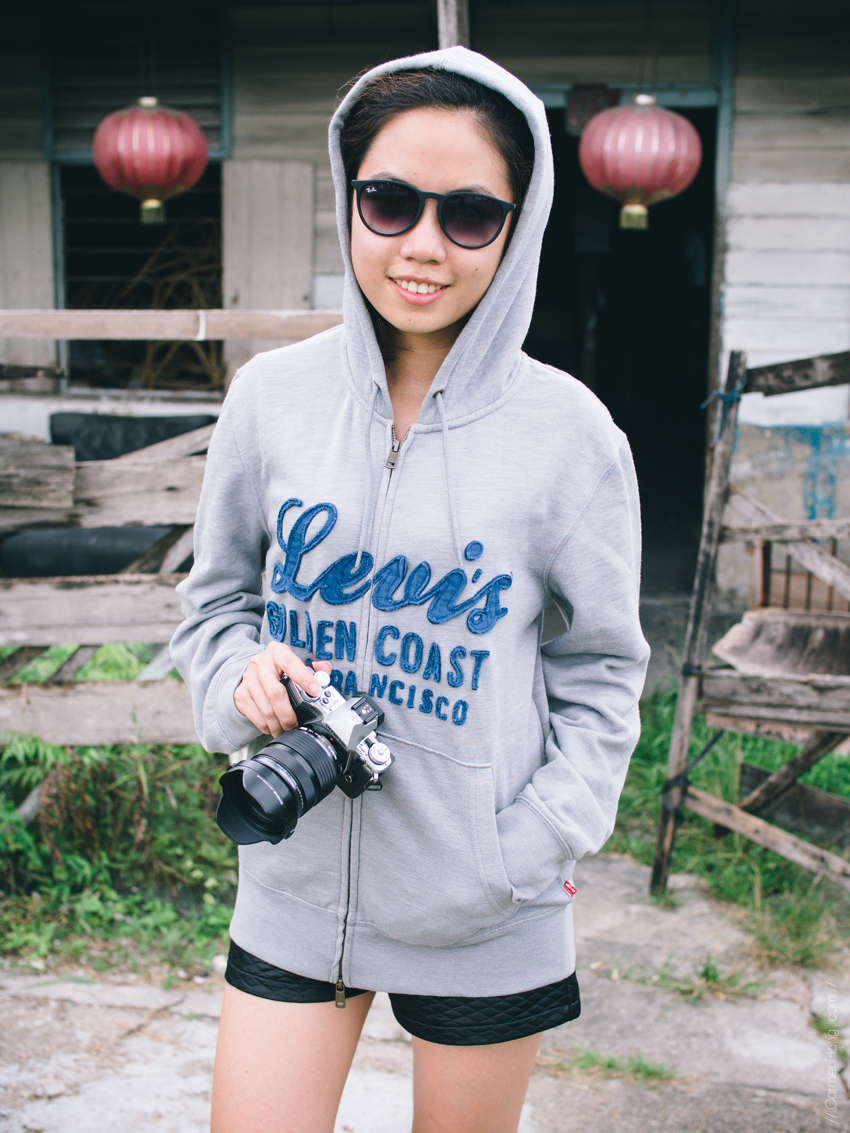 In my Sekinchan post, I mentioned how travel friendly the Olympus PEN Lite E-PL7 with it being lightweight, enabling me to bring along all my lenses for the road trip. This time around because I had the Olympus M Zuiko Digital ED 12-40mm f/2.8 PRO which have a constant aperture of f/2.8, so I didn’t bring any other lenses. With this PRO lens, it’s as good as having prime lenses with a focal length ranging for 12mm for wide angle, up till 40mm. Although the E-M5 Mark II is the latest camera addition to the Olympus Micro Four Thirds family, I was more excited with the 12-40mm f/2.8 PRO lens instead. I’ve always been more of a lens person. :p
So for this road trip, I settled with just the E-M5 Mark II and the 12-40mm f/2.8 PRO lens. I did carry along the Olympus PEN Lite E-PL7 together with the 25mm f/1.8 lens. Again, I managed to fit this all into my brown messenger bag. I’m still truly amazed at how compact the Olympus Micro Four Thirds’s cameras are. Before I bore you any further, let’s have a look at the pictures that I taken (mostly with the E-M5 Mark II and the 12-40mm f/2.8 PRO lens)!
* * * * * * * * * *
Because we were headed down on the first day of the holiday, we were caught in a somewhat heavy and massive jam on our way to Ipoh. There was nothing interesting to do in the car except taking selfies! The E-M5 Mark II has a 3-inch vari-angle swivel touch screen monitor, which made selfies so much easier too. So, it was car selfie time! 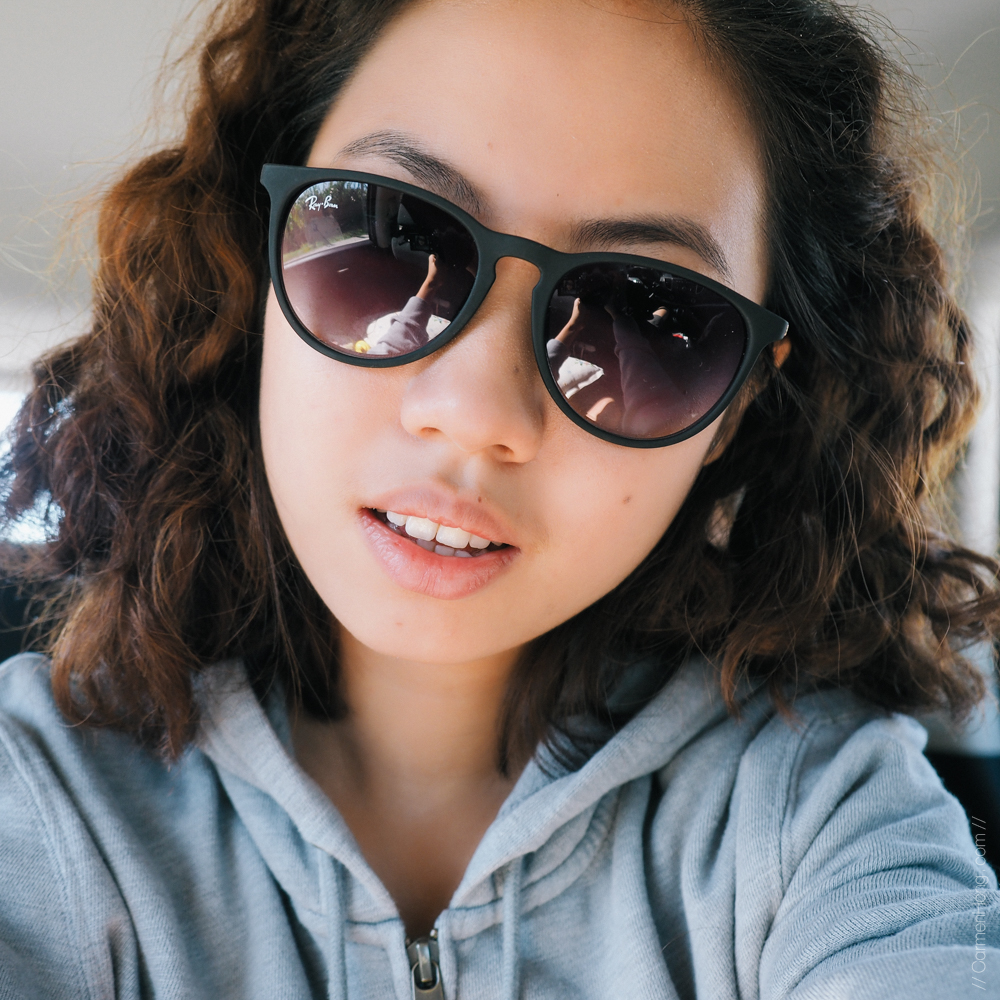 Can you spot the camera in the reflection of my shades? I’m using the e-Portrait Beauty mode for the selfie above, where the camera automatically detects my skin and only smoothen that. Notice how everything else is sharp and in focus too, like my hair and my hoodie!
Like in all our the Hong’s family gastronomic food trips, we would make pit stops along the way before we head to the destination of our choice and this time around, we picked to have a stop over in the Kampar town for breakfast. Mention Kampar and you’ll be reminded of the fish balls and tofu(s) too! And that’s what we headed there for, for some yummy fish balls and fish meat goodies! 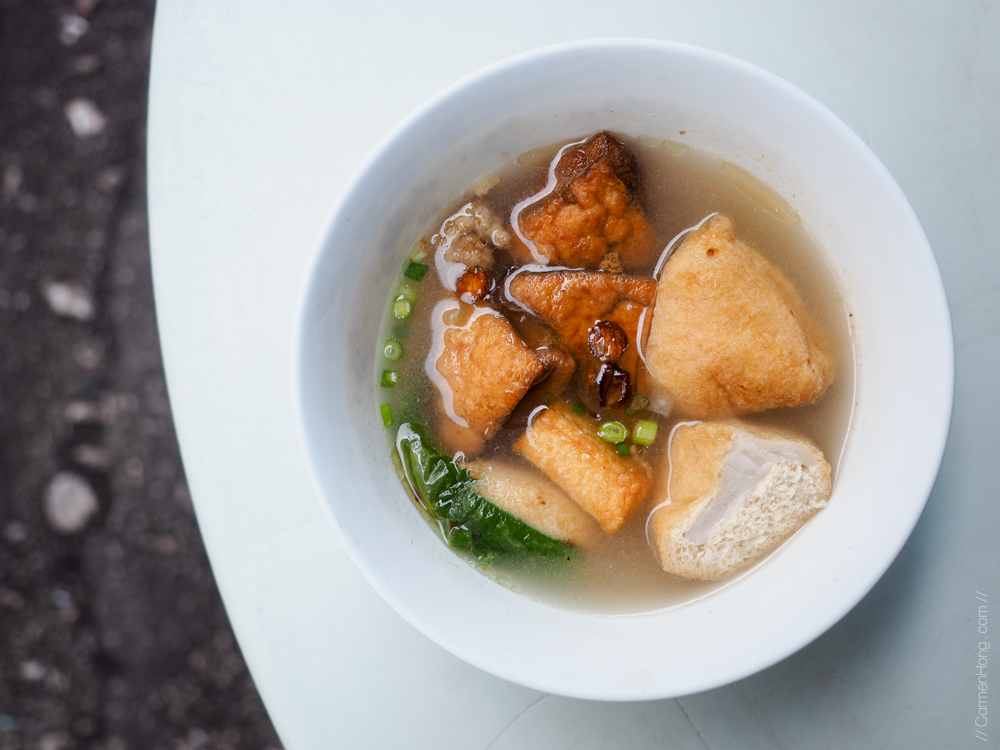 We had a family friend whose son studied in Kampar, so she recommended that we pay a visit to the Kedai Hoong Kee, which is located in Kampar Old Town. It’s located amongst many many stalls, so we had to look out for the shop’s name. You’ll find that there are a couple of other shops which would sell similar items as Hoong Kee does, but this shop was the busiest. They have an array of choices like fish ball, pork ball, taufu, fried wantan, fried foo chok and fried eggplant. Price ranges from RM0.40 to RM0.70 per piece. My favourites are the tofu ones!
* * * * * * * * * *
// Kedai Hoong Kee //
Jalan Baru, Taman Tasik Emas,
31900 Kampar, Perak
* * * * * * * * * * 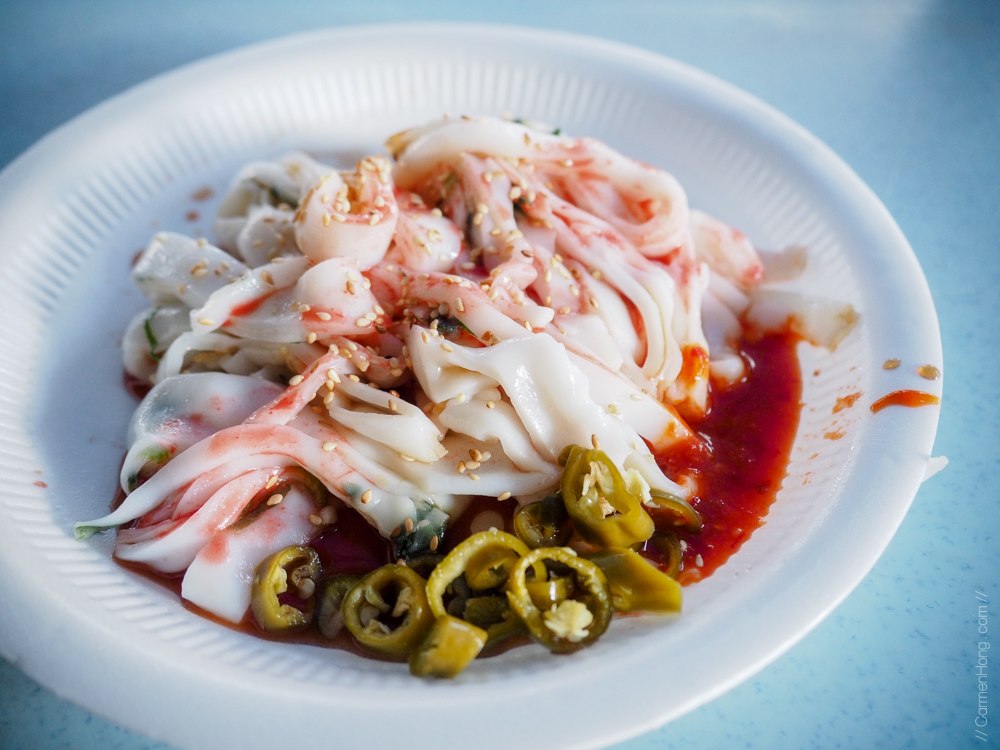 Dad saw another stall selling some chee cheong fun, about a few stalls away from Hoong Kee and decided to give it a try. But alas, as good and promising that it looks it actually pretty meh. I didn’t like the texture and taste of it that much. So it’s a no from me. The real winner of Kampar is the fresh sliced fish porridge in the next two pictures. 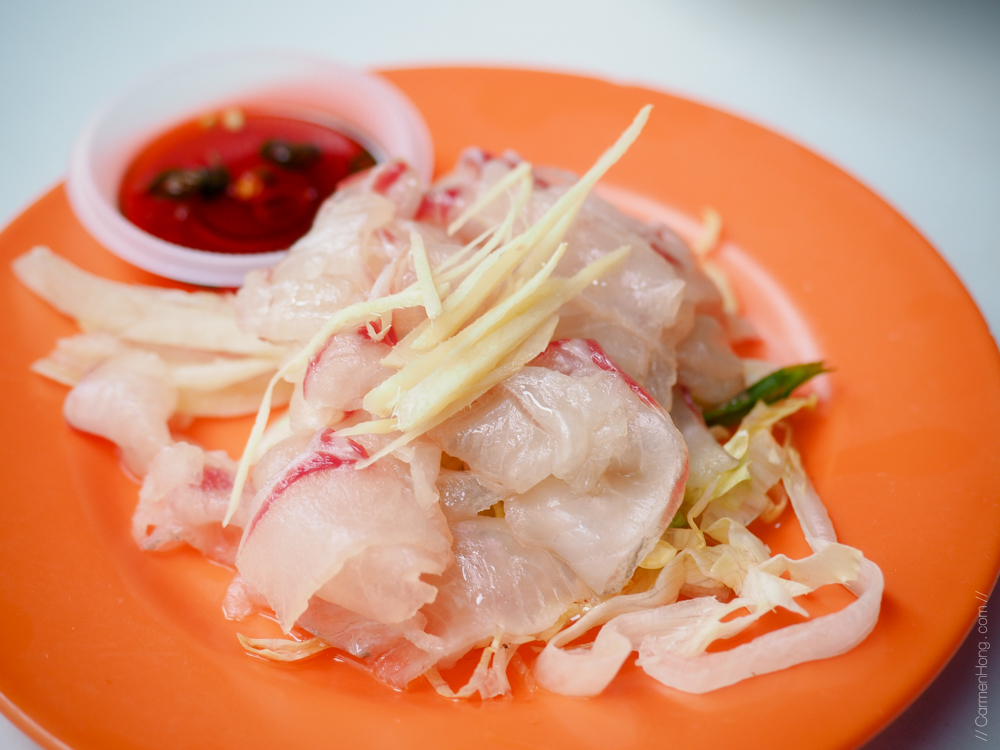 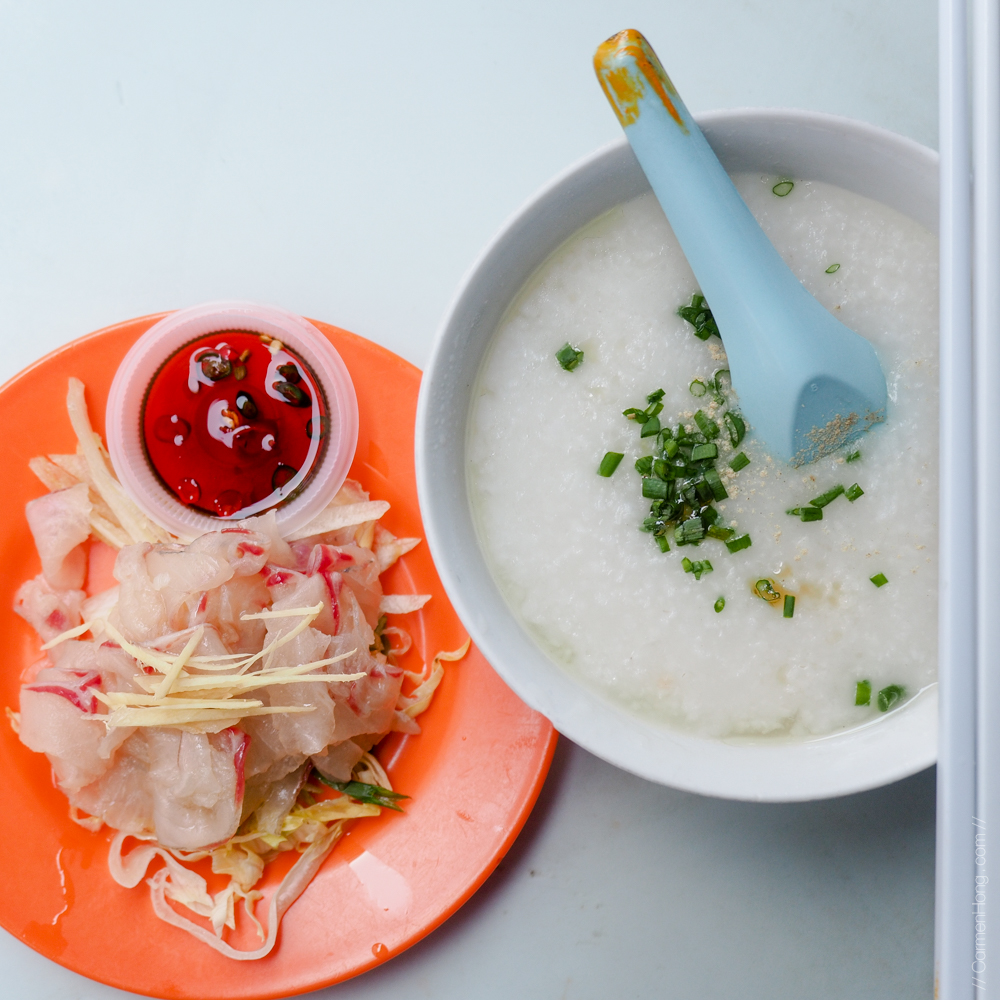 It’s true when they say that the simplest things are the best thing in life, and the same goes for food. This is one of my favourite comfort food that I eat in Pudu, Kuala Lumpur. This one was even tastier, because the sliced fish was so fresh! So fresh that you can eat it raw too, like sashimi. It had a raw crunchy sweet fish taste to it. I hope you can imagine how that tasted like, or else you can always taste it yourself.
There is also delicious chicken porridge served here, so if fresh fish slices are not your choice, you can have the chicken instead. The stall is located just opposite from the rows of stalls where Hoong Kee is located at. The porridge stall is located in Pusat Makanan Gold Wing and a bowl of porridge is RM3.50 each.
* * * * * * * * * *
// Pusat Makanan Gold Wing //
012-5713177 | 018-5791821
Jalan Baru, Taman Tasik Emas,
31900 Kampar, Perak
* * * * * * * * * *
After that, we headed to Pasir Pinji which actually was a neighbourhood place located in Ipoh. What I found out was that the delicious food from Pasir Pinji was located in those house in a neighbourhood, especially the famous chee cheong fun. 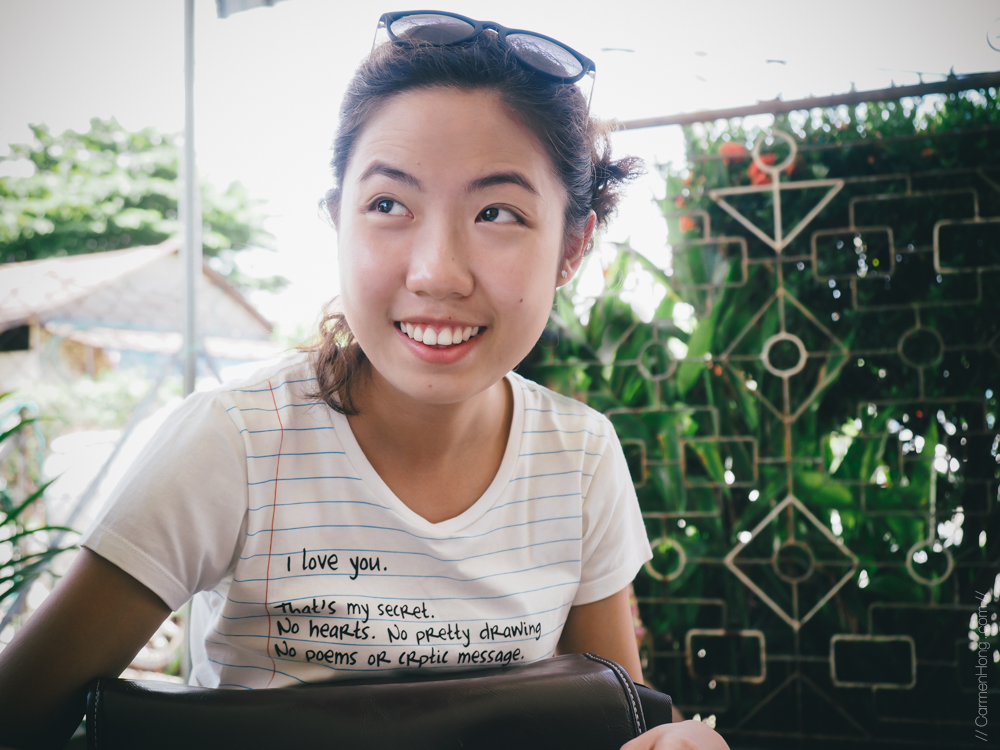 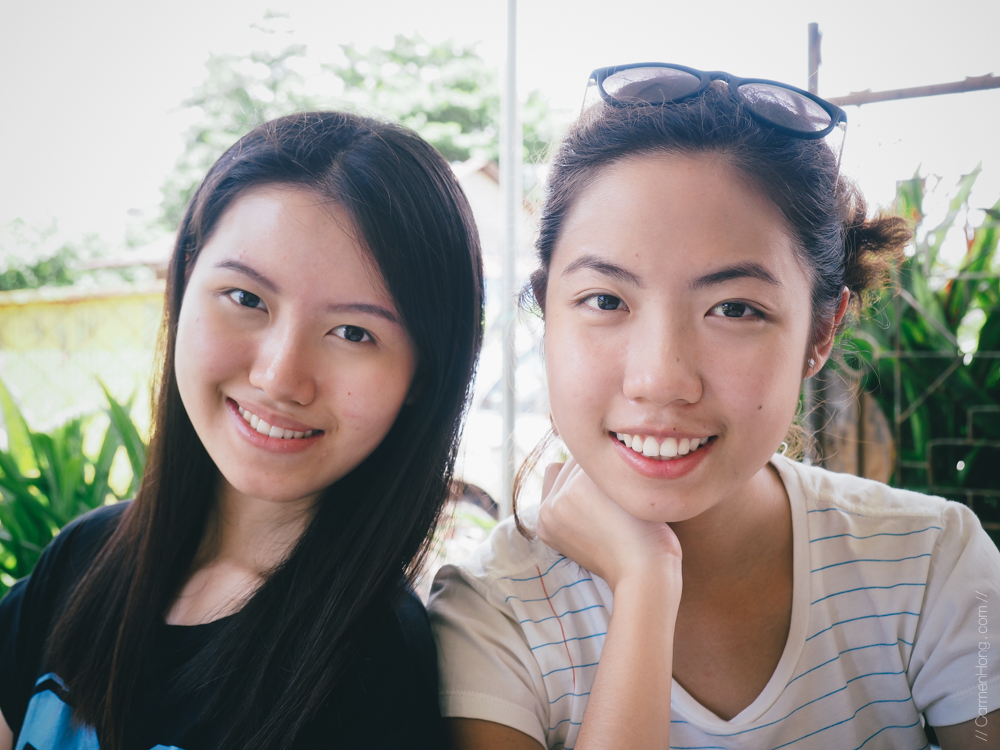 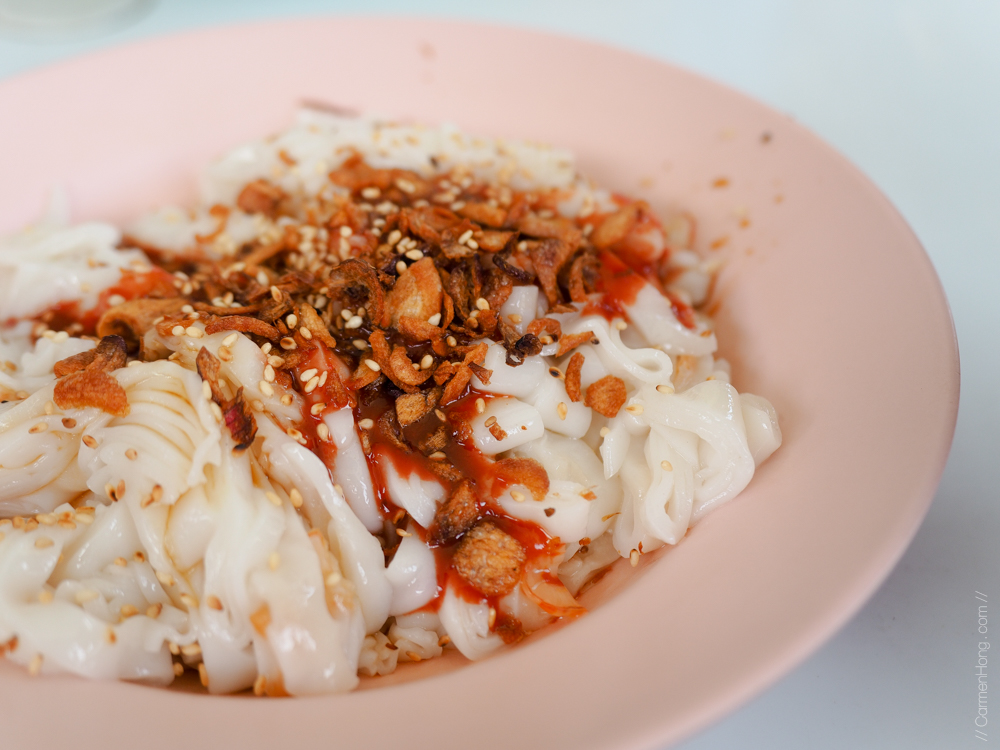 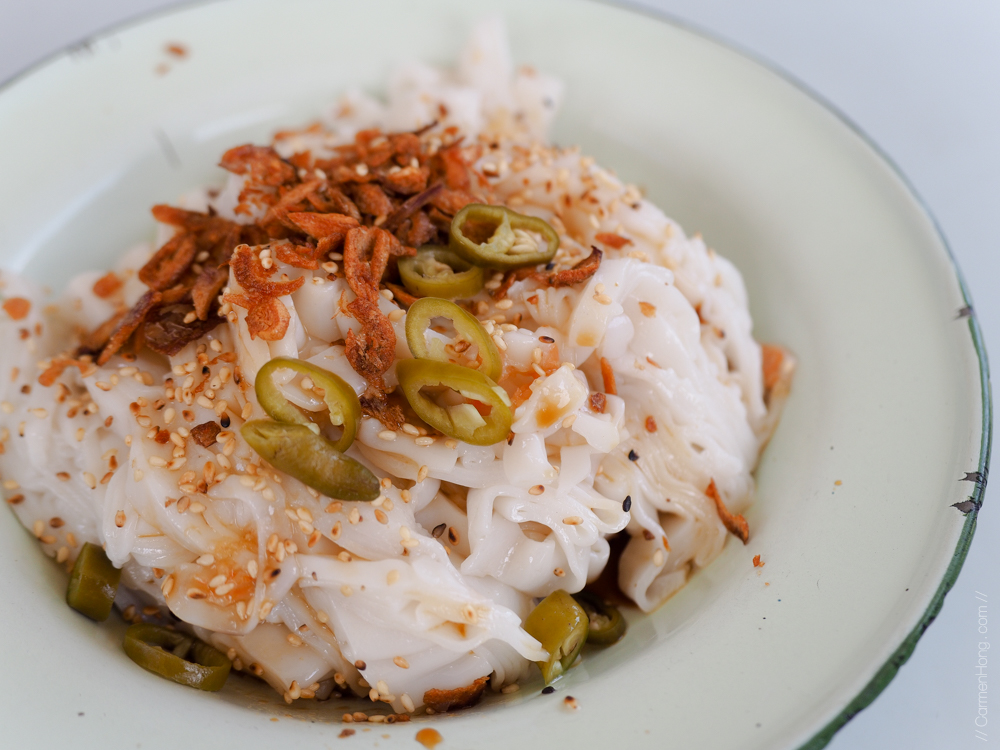 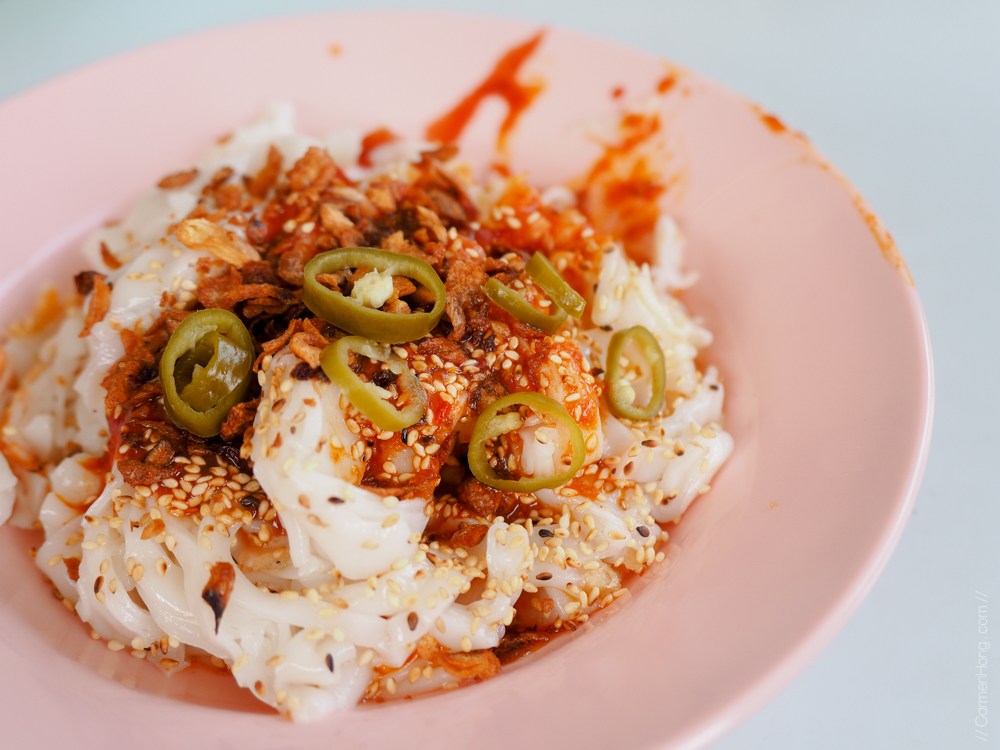 The chee cheong fun comes in three different sauce of choice; the sweet one or chilli or just the plain soya sauce. Since there were all together 5 of us and we wanted to try all three sauce so we ordered all three! My favourite one would still be the simple soya sauce. To be honest, I always like my chee cheong fun plain and simple. I feel like it’s only then I’m able to taste the smoothness and the flavour of the chee cheong fun.

* * * * * * * * * *
// Pasir Pinji – Chee Cheong Fun //
House No 1456,
Jalan Pasir Pinji 5,
31650 Ipoh, Perak, Malaysia
* * * * * * * * * *
There are a couple more places in Pasir Pinji that we have visited but I decided I’ll shorten the post right here and cover the rest of the places we have visited in the next post instead. As I was reviewing and working on my pictures in Lightroom, I realised that I have actually been shooting in a range of focal length of 20mm till 25mm with Olympus M Zuiko Digital ED 12-40mm f/2.8 PRO lens, on the Olympus OM-D E-M5 Mark II. The thing was I was probably doing this very unconsciously because with that lens, it’s very convenient to pick any focal length and not having to worry about the aperture.
So, when I took the pictures above, most of the time I’ll zoomed right it to a focal length which I’m comfortable with. It’s probably around that range because the Olympus 25mm lens is my default lens anyway. That would explain why. But I did truly enjoyed using the Olympus M Zuiko Digital ED 12-40mm f/2.8 PRO lens with the Olympus OM-D E-M5 Mark II. Shooting with this combination feels rather solid and personally, damn I miss that feeling. The Olympus PEN Lite E-PL7 is amazing, but doesn’t feel the same. Ah, wells till the next road trip then. ;p
Till next time,
xoxo
Share

Out & About: Rain Party…