I have been pretty much delaying my blog posts, I’m horrible with keeping my blog updated that way. Things have been going on my mind about my blog, photography and my direction. I have doubts about these stuff, and it’s bugging me. But I’ll try to keep them aside, and keep myself blogging about things I love.

* * * * * * * * * *
If you read my last food tripping post in Muar, I was absolutely disappointed in the food there. So much so, that we decided to hop over to Malacca from Muar in hope of better food, which was almost guaranteed because we went to Malacca before. Plus, I had some friends who are from Malacca and I asked them where to head to. The first stop is the famous popiah babi in Jalan Bunga Raya. 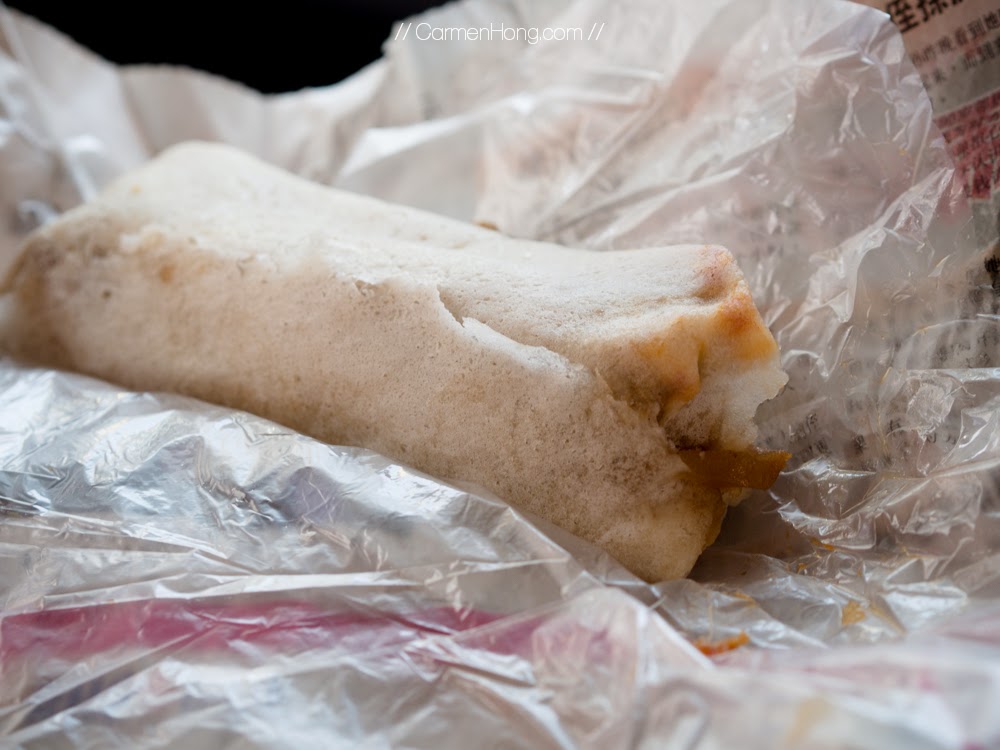 Pork Popiah | Roadside stall along Jalan Bunga Raya
Dad loved it so much the last time that he wanted to head here first before anything else. We got a little lost in finding our way there because the GPS wasn’t working, but we found it in the end. It is near a place called Madam King, if you don’t know, it’s actually a roadside stall. So, we stopped by the roadside and I went down to buy it. There wasn’t any queue when I arrived and a young chap with an old lady was at the stall. The lady took my order and proceeded to pick two wrapped rolls from a huge pile of already made popiah(s). The man was busy preparing more pre-made popiah(s). 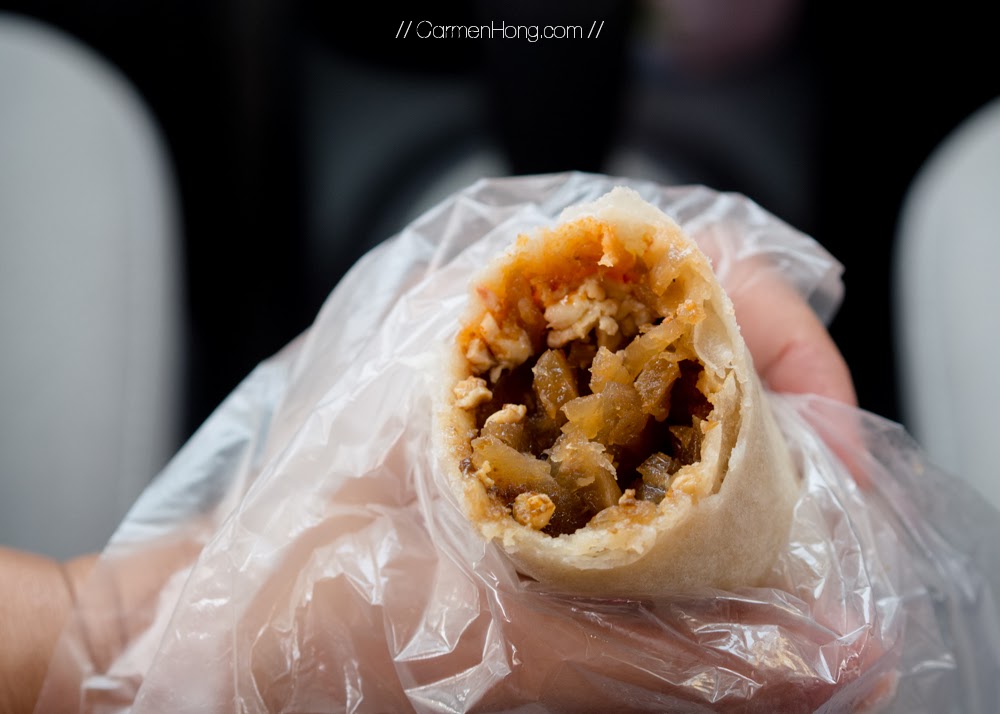 Pork Popiah | Roadside stall along Jalan Bunga Raya
This is not a very flattering shot of the popiah but just to show you what it looks like. The first time I had this was during a BRATs camp, the first one that I helped out with. And oh, I remember how porky the popiah was. It was overwhelming, with pork taste all over and then you bite the crunchy pork lards; that is pretty much what an orgasm in your mouth feels like. Haha. Unfortunately, it didn’t taste the same like that anymore. I could bare notice the crispy pork lards, and what more the porky taste. Because the popiah was pre-made, it could have made the pork lard soggy and yes, the popiah was cold. My brother loved it still, but not so much for me. 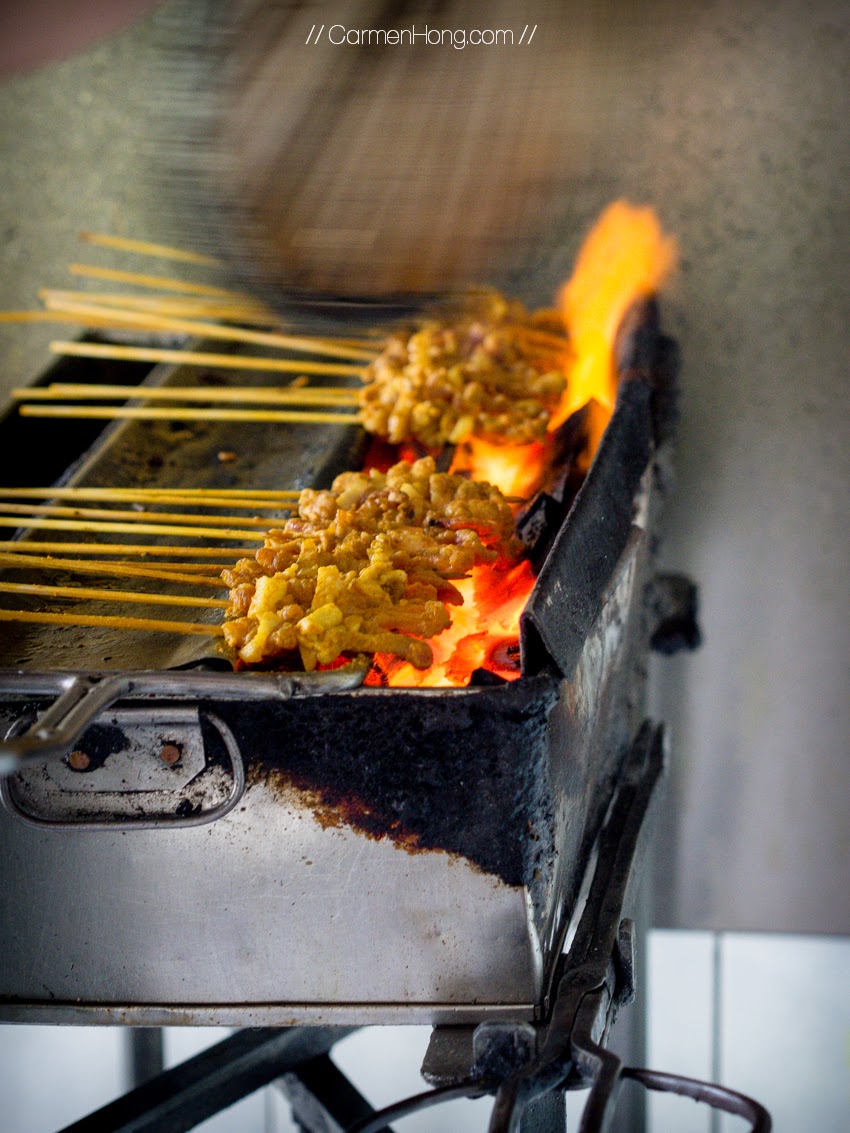 The next stop is pork satay, because I remember vaguely that Jason have mentioned it before years ago during my last trip down but I never got to try it. So, this time I decided to head to the shop for pork satay. The place itself wasn’t too difficult to find, I think it was in Waze too. 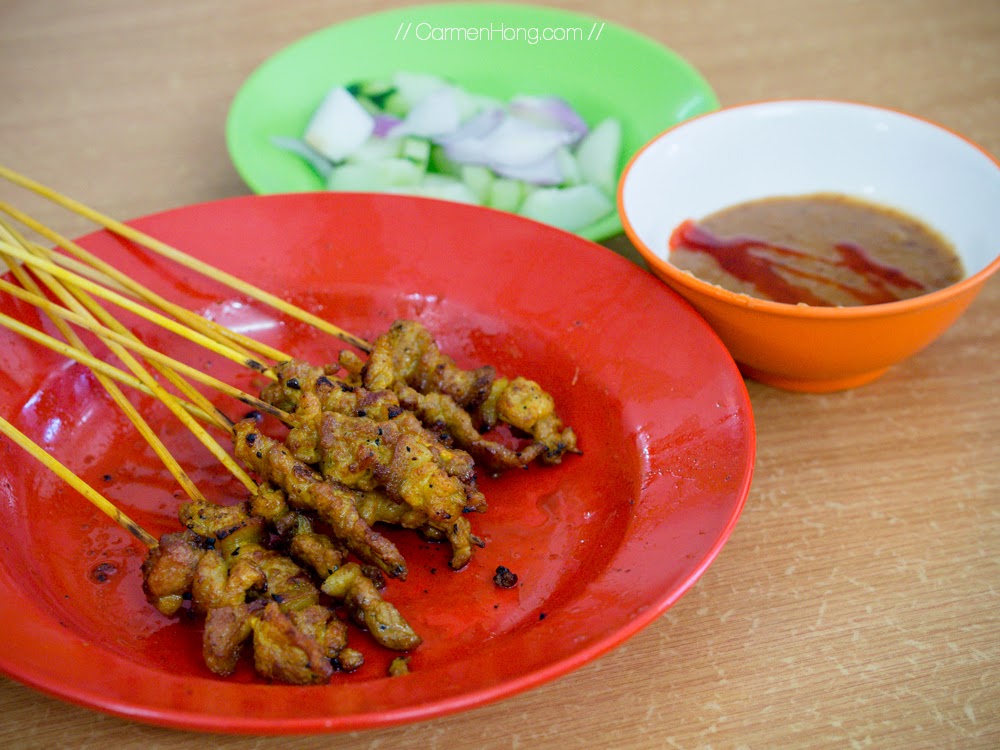 The first thing I thought was how tiny the pork satay sticks were. I have been probably too used to the Kajang satay, which was easily double the size. In terms of the taste, it was crispy and pretty much well marinated. But because it was so tiny, it didn’t leave much impression, to say the least, it really wasn’t worth the trip to this place. Apparently, there was a better one in Kajang according to Dad. I will admit though, it is something different for a first timer.

Next we headed to the Jonker Street which was walking distance from the pork satay place. Jonker Street was as happening as you would expect it to be on a weekend, there was the occasional human jam and what not. Along the street, they were plenty of peddlers all around. I never been one to try those, unless I know it’s damned good. Pretty much walked past them because you could get those type of food from the night market too. 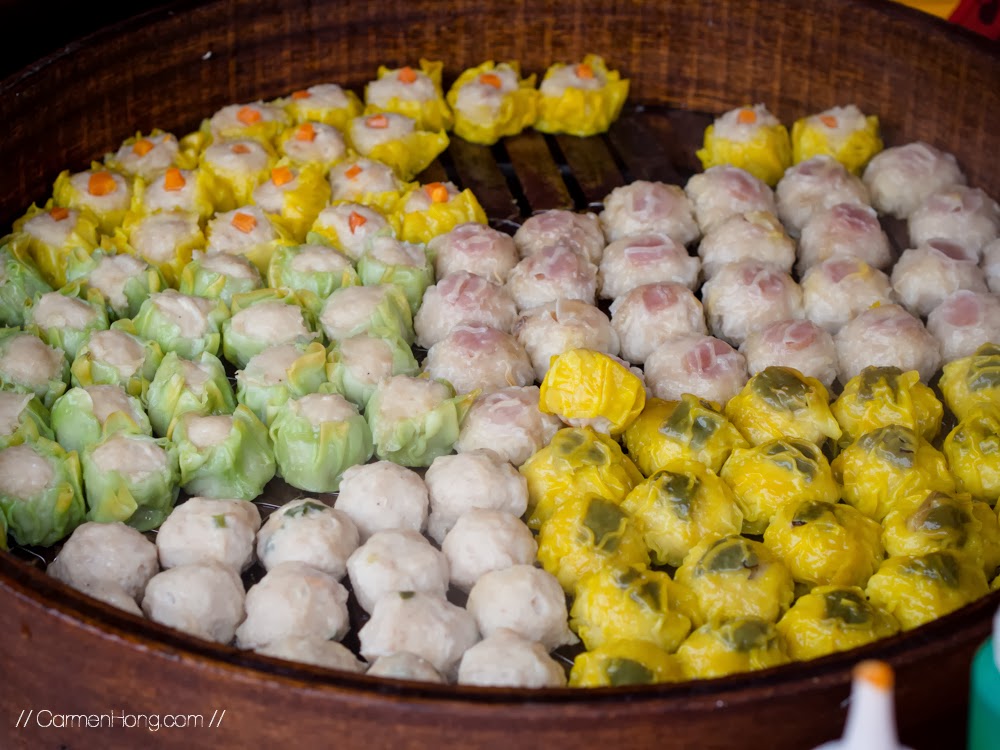 Assorted Dim Sum | Jonker Street
As we walked further, I came across this lady selling a lot of dim sums! And it was so cheap, I didn’t pay but I think it was something like RM5 for 6 pieces. We could pick any of the flavours there, and the picture above is just one of the tray. The best part was that it was actually delicious, not bad. 🙂 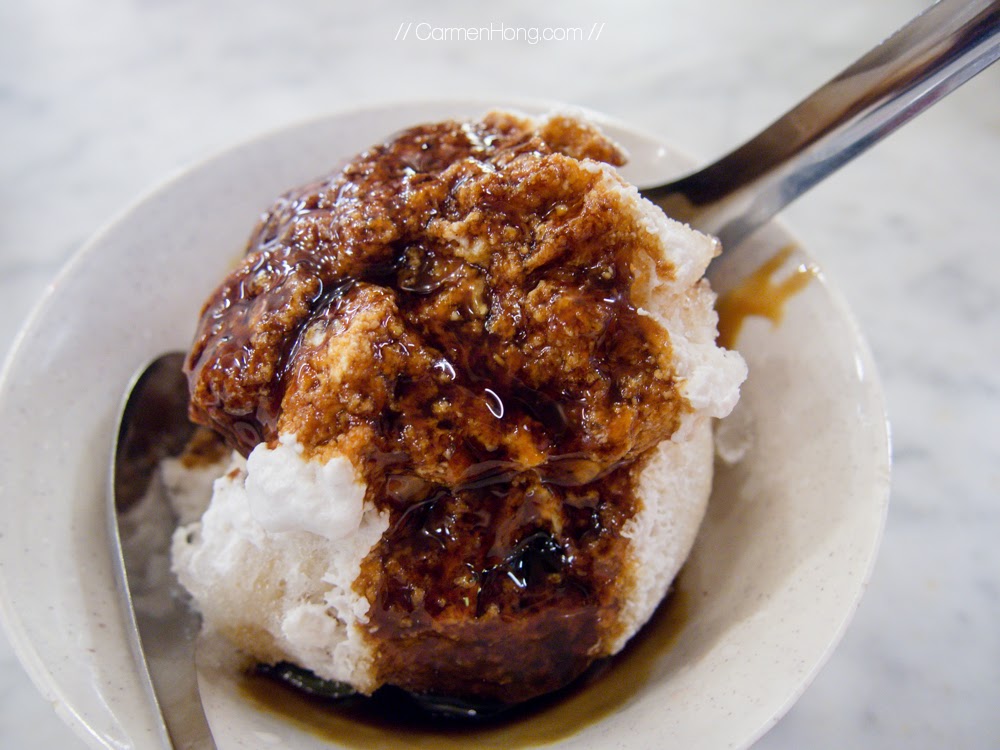 The last time in Malacca, I had the ones from Donald and Lily’s which was also pretty famous already. But this time around, we wanted to try a different one and decided on Jonker 88 this time around. The place is located along Jonker Street and boy, there was a queue there. The place was rather small and it was packed, it might take some time just to get a seat. We tried two types of chendol; Baba Chendol and Durian Chendol. I have never been a fan of chendol or Gula Melaka, and the Baba Chendol  was just topped with so much Gula Melaka, it made me shudder with a spoonful of the chendol. Not my cup of tea, or any of my family’s. 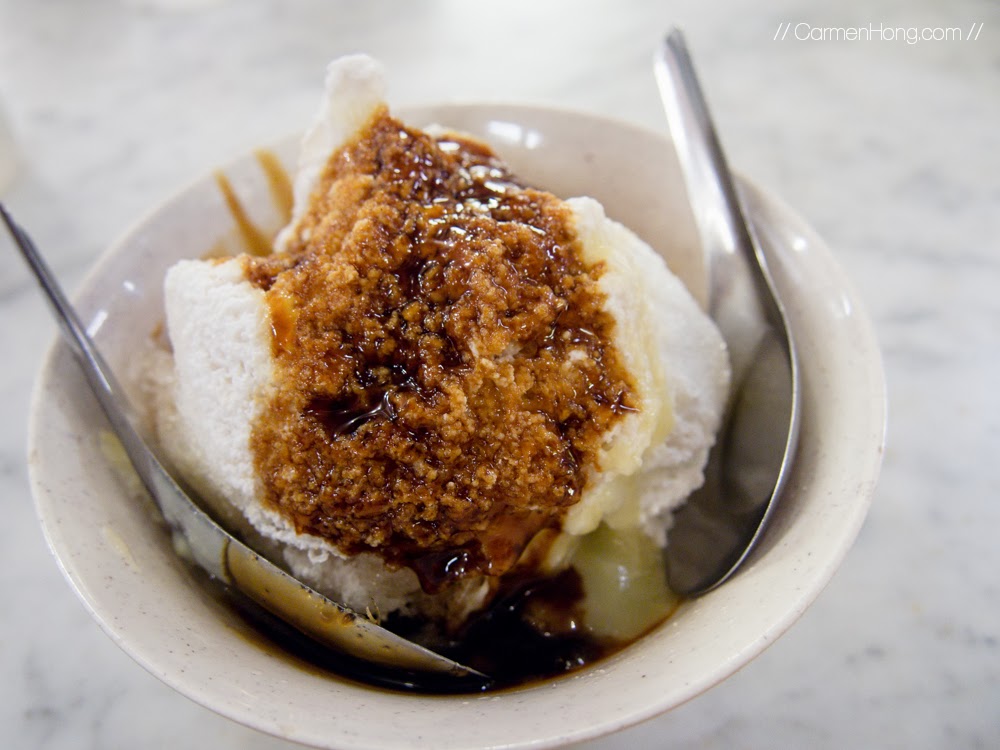 Durian Chendol | Jonker 88
The durian chendol tasted much better, thankfully with lesser amount of Gula Melaka. This chendol has a subtle hint of durian flavour, I would think that those who stay away from durian would not actually minded them in here. I quite like it although it is not as good as the usual ones I’ll have in Malacca. Well, at least I tried a durian chendol once in my life. 🙂 I probably would get another one if I’m down in Malacca again. 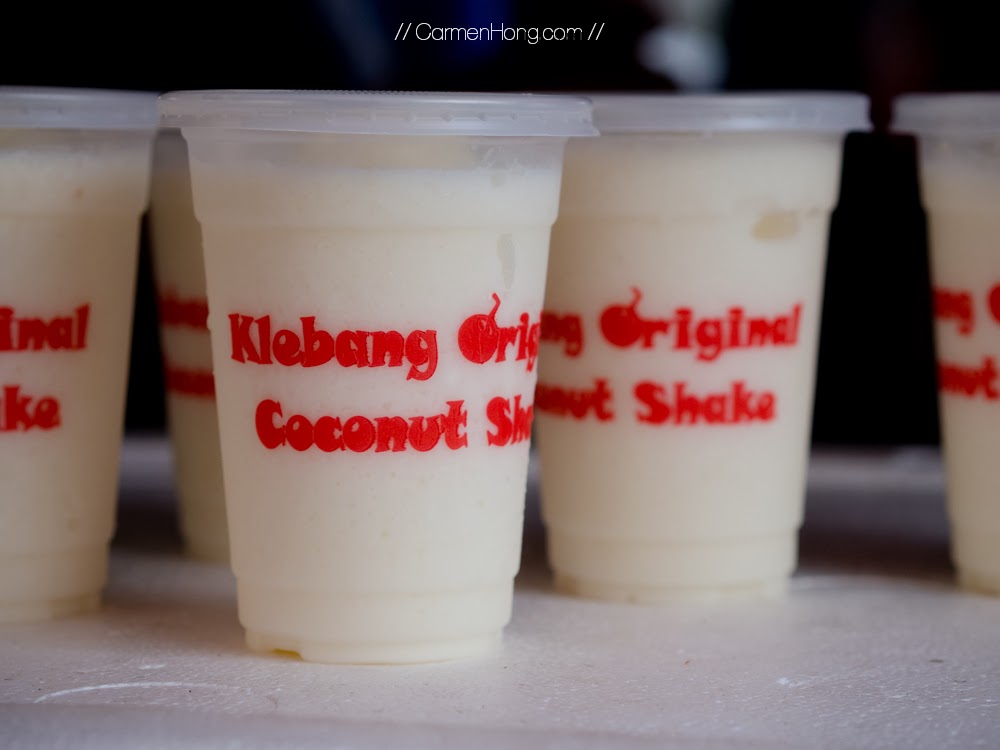 Coconut Shake | Klebang Original Coconut Shake
I first heard about this coconut shake from my friends on Twitter, where they would rave and go on and on about how amazing I have to try this coconut shake. The very first time I tried it was in Rawang, near where I used to work and I tried it then out of curiosity. I didn’t know where the Klebang one was so I messaged a few Malacca-ians to ask, one told me that I could use Waze. Another gave me directions to the place and said I wouldn’t miss it for sure because it’ll be jammed leading up to the place. I didn’t believe him when he said that, I mean what place is capable of causing a jam just to get to a coconut shake place?
Boy, was I so wrong. I think we were in the car jamming our way to the place for a good 20 minutes. The best part was finally arriving at the place and I saw this extremely long, probably 1km long queue for coconut shake. If I hadn’t came all the way there just to had it, I would have left. But I decided to try it anyway. And it was AWWWWSOME! They had two versions, which I think didn’t make much difference. If you don’t know what it’s made of, it is actually coconut water blended with Wall’s vanilla ice cream. It’s really good; smooth and creamy with coconut yummy goodness! 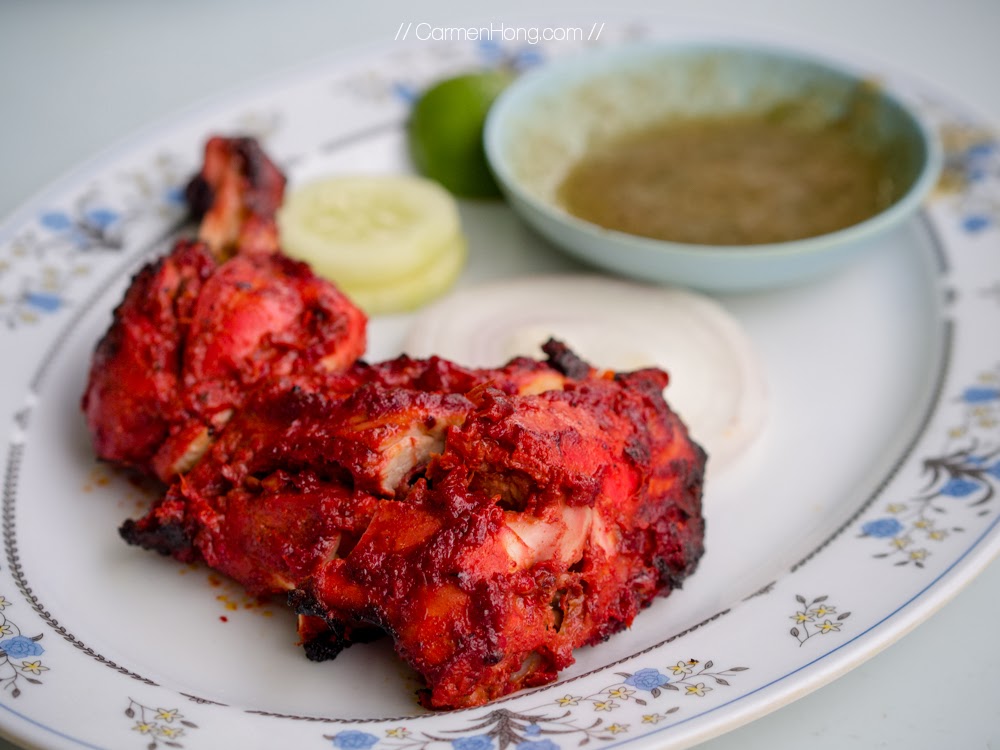 The last stop for the day would be my all time favourite place in Malacca, the super duper famous Pak Putra. Really, I don’t think I need to elaborate further because I’m pretty sure you would have tried it before. You can tell how delicious the chicken is from the picture, because it’s juicy and well-marinated. I know some tandoori chicken can taste so dry and just ugh chewy. 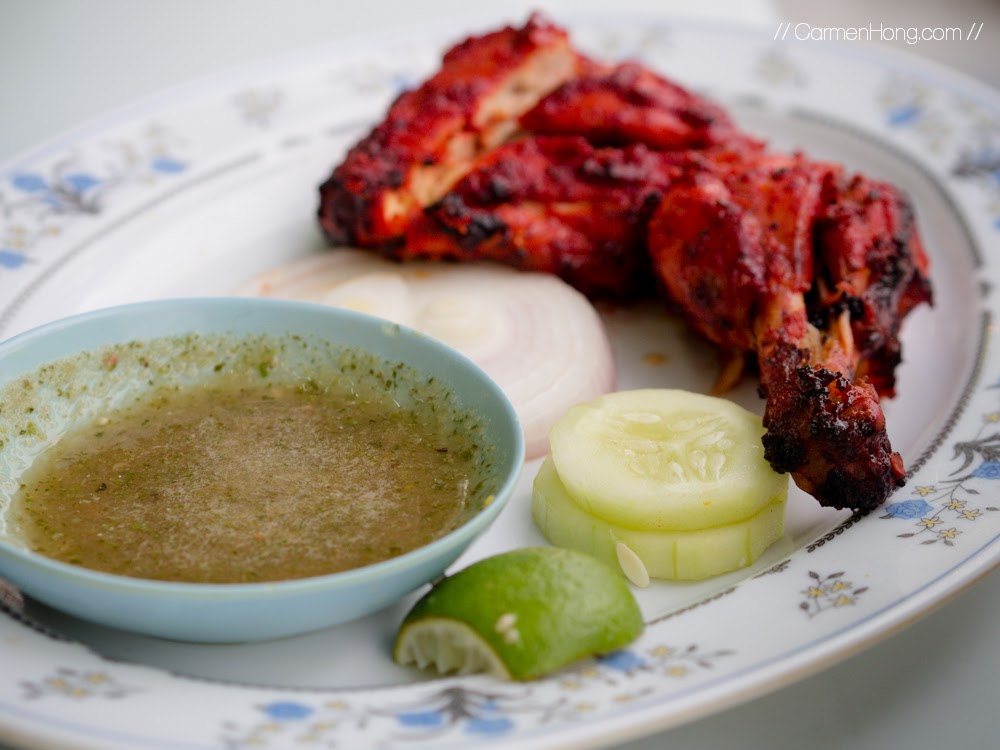 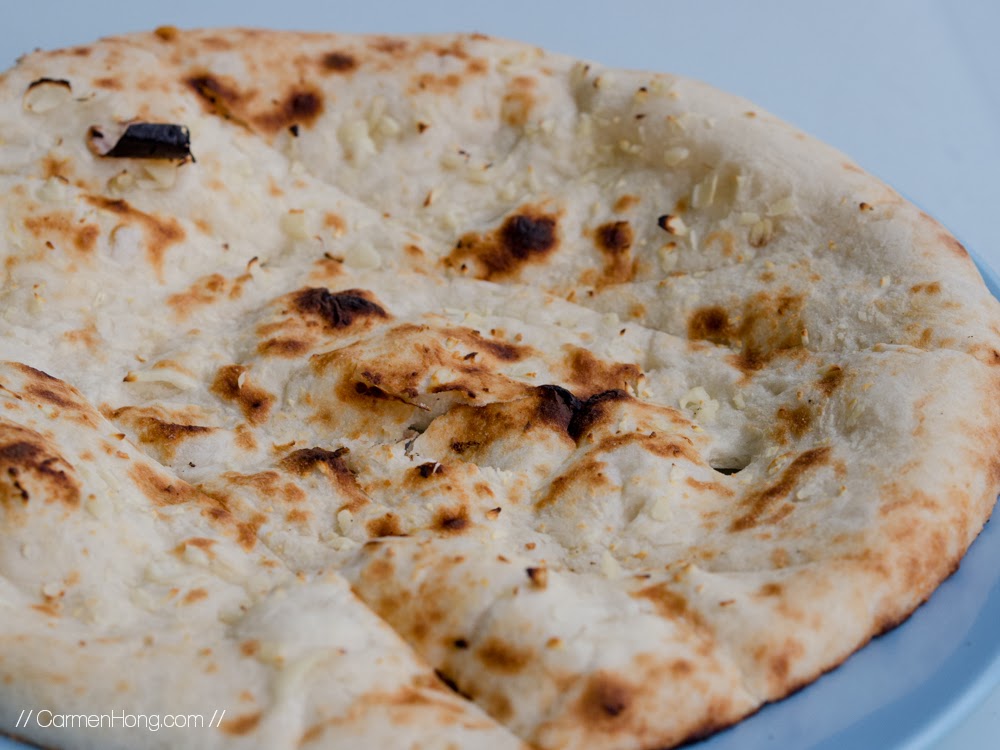 Garlic Naan | Pak Putra
If you ever in Malacca, this place is a must visit and must try! Be there early though because it can get crowded later in the evening and their tandoori chicken might finish. If I lived in Malacca I would have this every weekend for sure. The price for the chicken has apparently increased from RM6.50 to RM8.00, so that is something you might want to take note of before ordering 10 plates. :p
* * * * * * * * * *
And that marks the end of my food tripping edition. I do hope I can go on another food tripping adventure, if anyone is up for it, let’s go for one! I’m planning for a Penang one soon, that place is practically a food haven.
till next time,
xoxo
Share

In Everywhere and in between