If you noticed the extra “s” in the title above, it is because I actually went on two road trips to Sekinchan. The first are with the shutter-loving photographer guys, and the second was with my family. And of course, in both trips I brought the Olympus EPL7 with different set of lenses. The first trip was intended to head to Sekinchan to shoot the paddy fields and Sekinchan town. So, I brought along with me the following lenses; Olympus 14-42mm f/3.5-5.6 M. Zuiko Digital ED Zoom Lens, Olympus 25 mm f/1.8 M.Zuiko Digital, Olympus 45mm f/1.8 ED M.Zuiko Digital and Olympus M.Zuiko 60mm F2.8 macro lens. 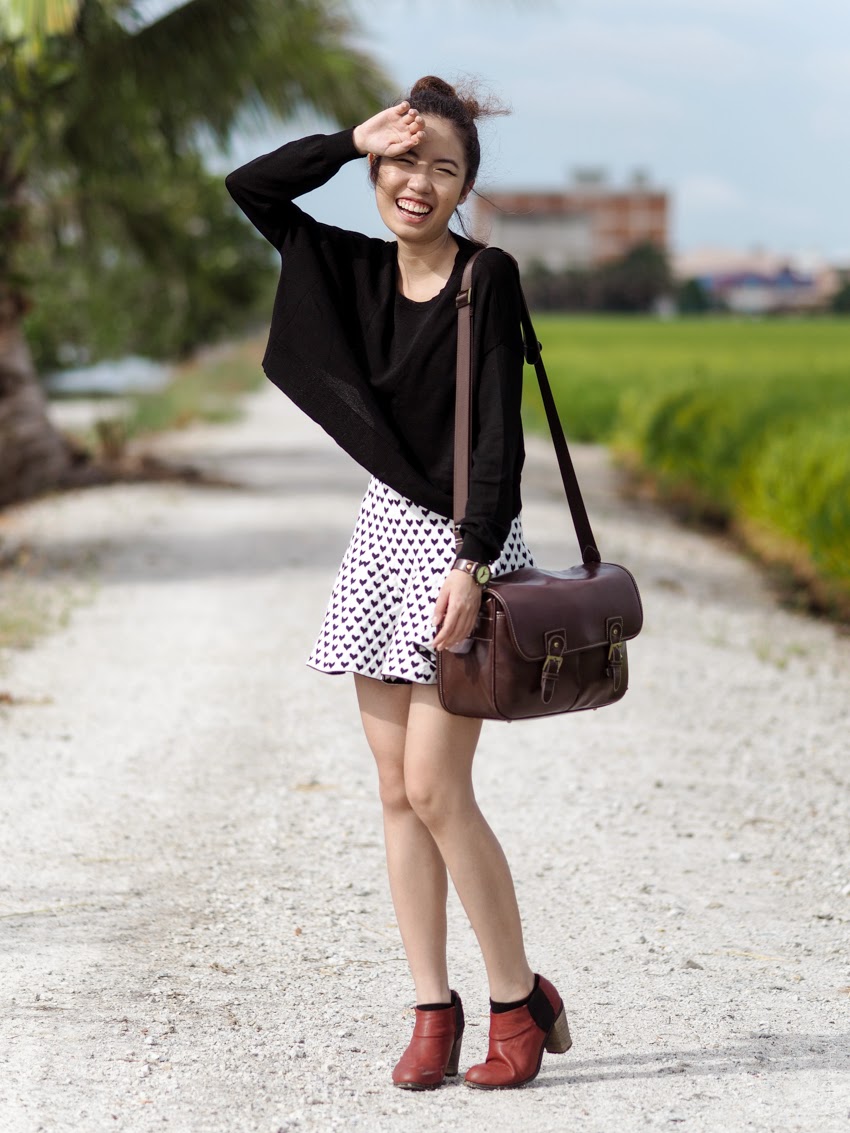 That means that I had with me, the Olympus PEN Lite E-PL7 and four different lenses in my bag with me that I managed to fit into my sling camera bag (the one pictured above). One of the biggest advantage being on the Micro Four Thirds system had always been the fact that the cameras and the lenses are compact sized, and are able to deliver quality images. Recently, I had a friend who asked for my opinion on recommending a camera which is suitable for travelling and selfies. There is no better camera that came to mind other than the Olympus PEN Lite E-PL7.
I posted previously on all the functionality of the camera, and based on that, it is easy to see why the EPL7 comes to mind first. It’s compact size makes it easier to carry it around, without feeling burdened by it. With the 14-42mm lens is attached to the EPL7, the pancake lenses made it look even tinier. A lot of times, I have heard comments that goes something like this, “Oh, I don’t think the kit lens (14-42mm lens in this case of the EPL7) is good enough. Better to get xxx lens.” 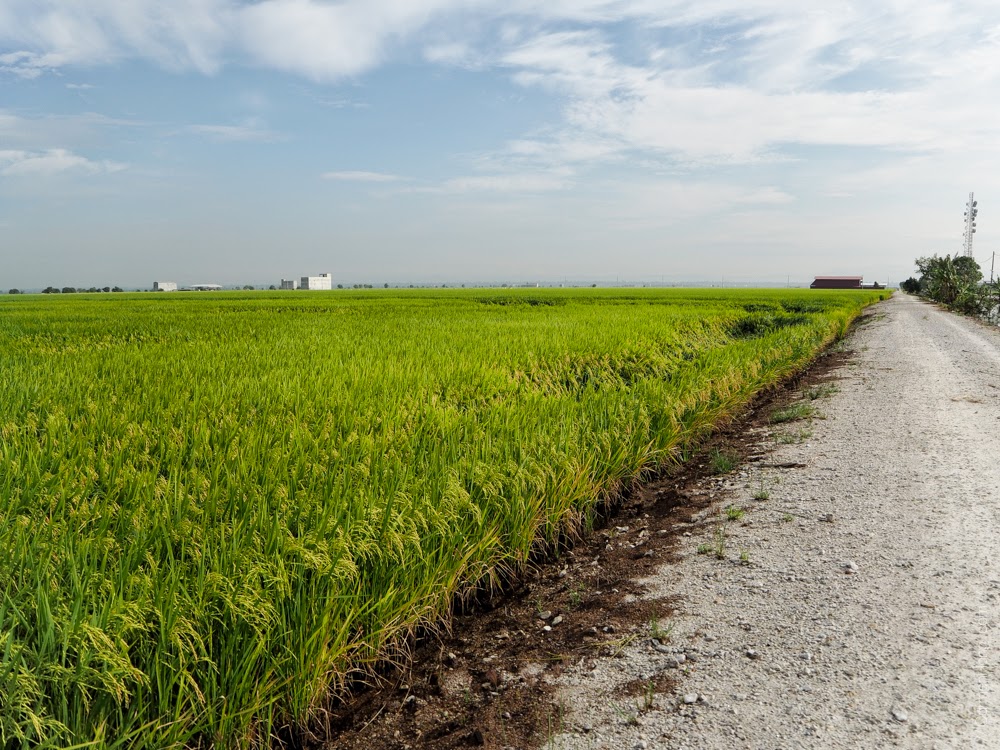 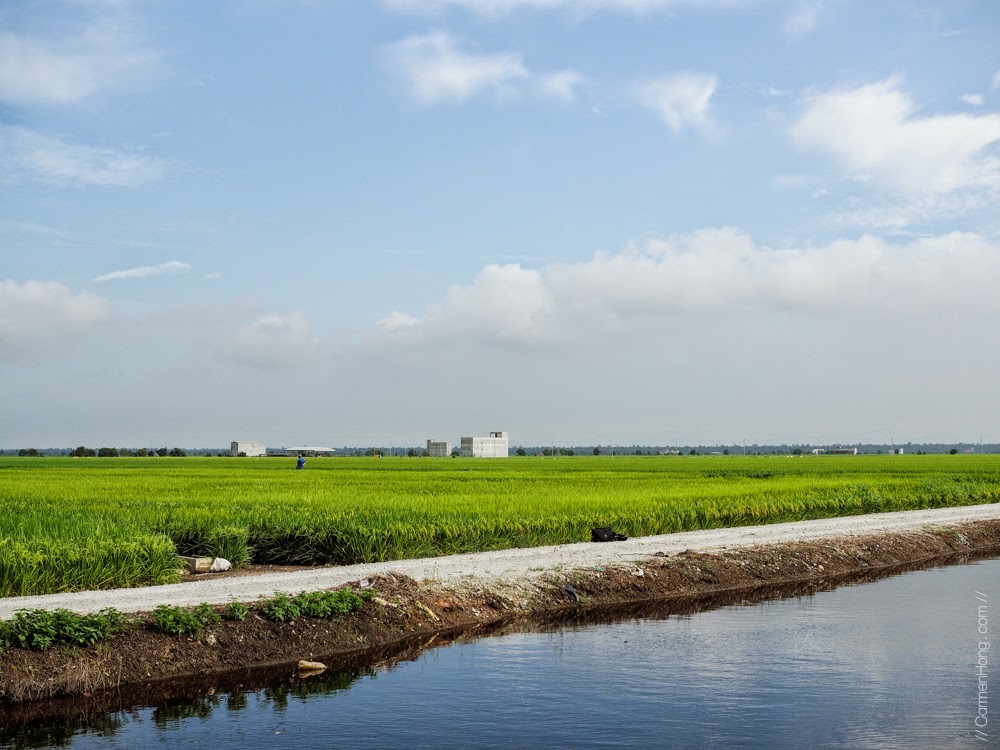 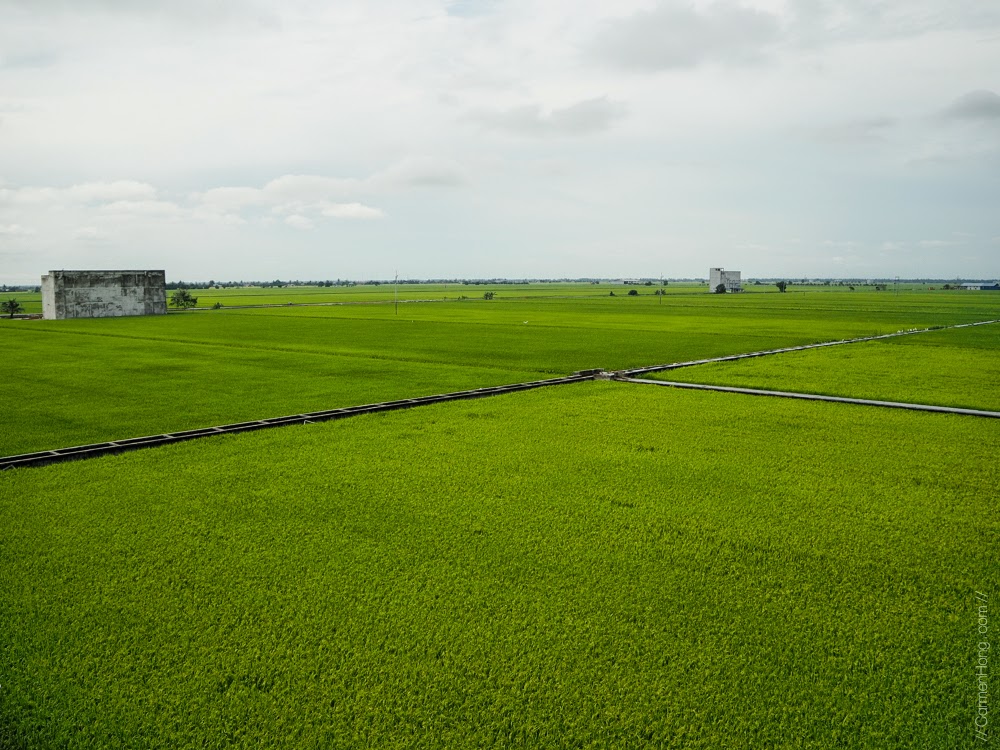 These pictures above are taken with the Olympus 14-42mm f/3.5-5.6 M. Zuiko Digital ED Zoom Lens,  which is the lens that comes with the EPL7. Some would call it the kit lens. A good friend once told me that there is a reason why the kit lens is the kit lens. It is a lens which is capable of many things; from shooting wide to zooming it closer. Granted that it will not be as sharp as primes are but I would say that the kit would generally cover most of your shooting needs.
This would bring me back to the one recommendations that I tell friends who just got the camera, “Always shoot with the kit lens first before anything else. Shoot extensively with it, know what it can and what it cannot do. It is only from that, that you’ll know what the kit lens lack in and only then do you get another lens to which can do it instead.” 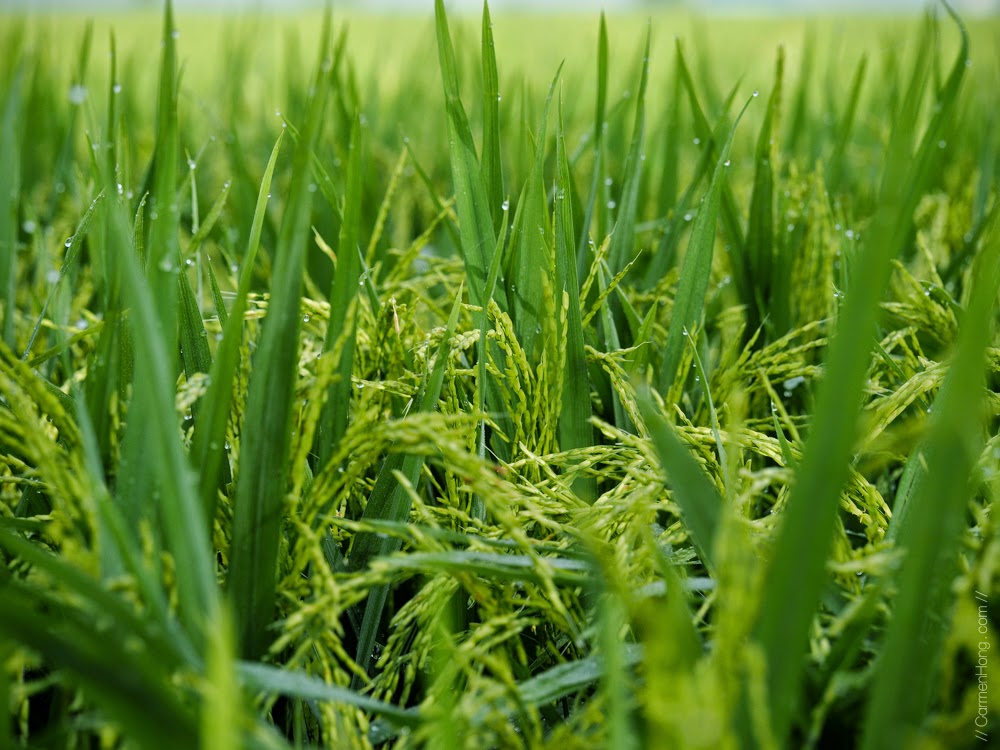 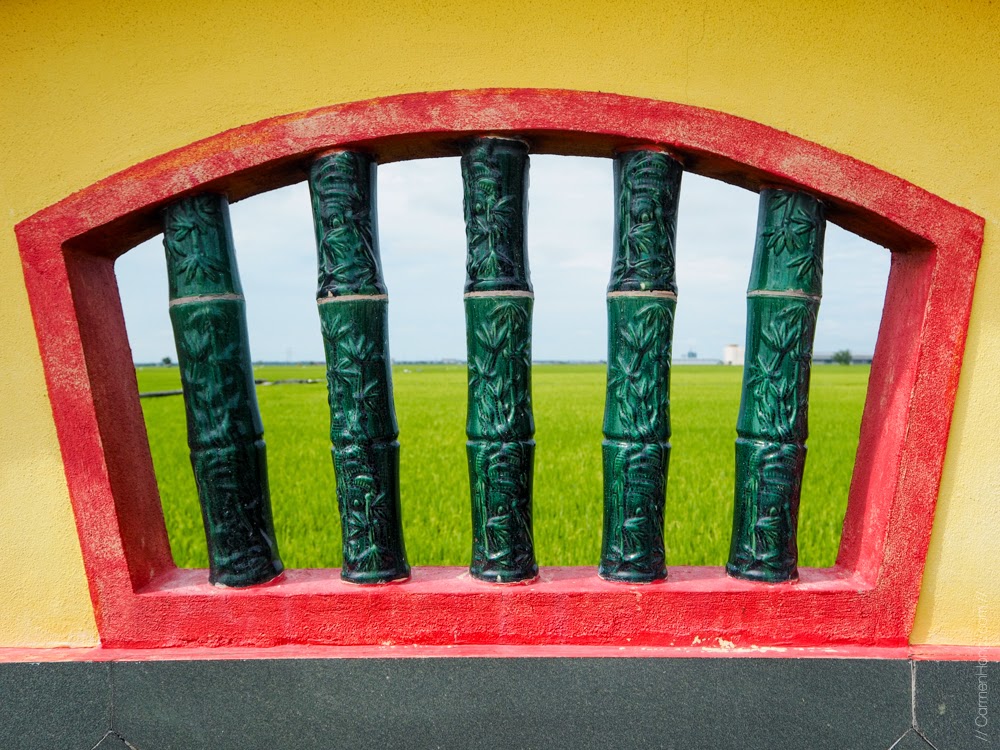 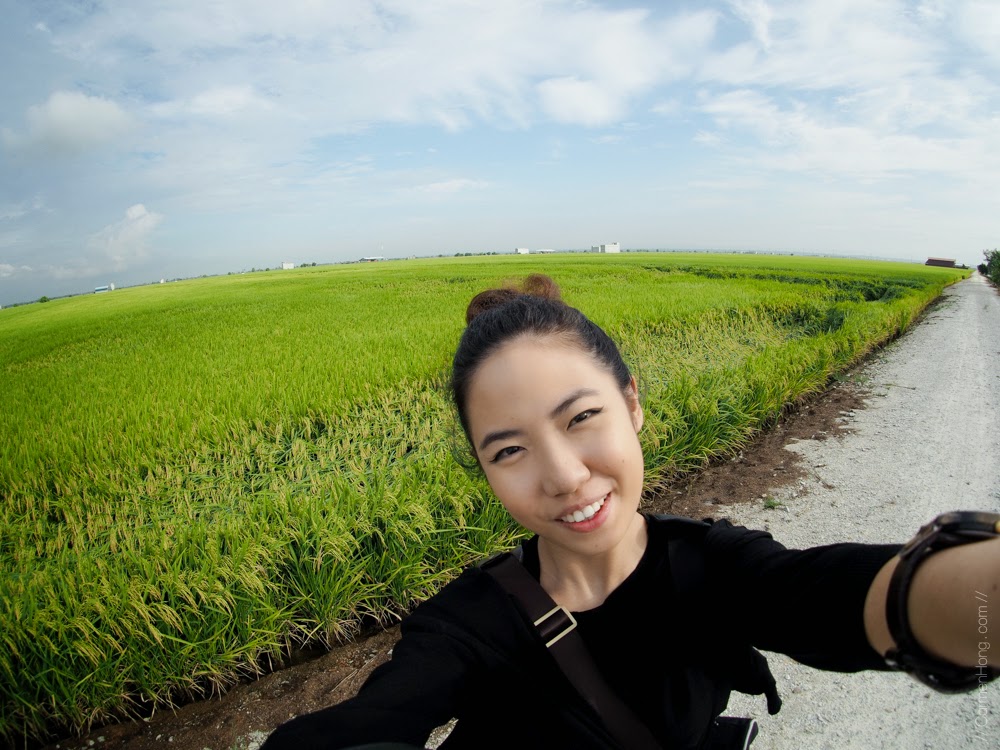 It is no surprise why the EPL7 is an amazing camera for travelling, simply because it is such a handy camera to take selfies with. I won’t need to run you through why, I already wrote two posts about the functionality of the camera which allows you to do so. The first would be flipped-down LCD screen and the second would be the WiFi connectivity. If you haven’t read my posts yet, do check them out here; Snaps: Selfies with the Olympus PEN Lite E-PL7 & Review: Why I love the Olympus PEN Lite E-PL7.
So, back to Sekinchan… I honestly didn’t get much pictures that I like enough to post it up. This was rather disappointing for me, but I was rather distracted to shoot. It happens whenever I’m shooting something that I’m not familiar with, like in this case landscape. But I always tell myself I need to push myself to try the different things. And this is why I keep shooting, because there is no shortcut to getting better at something. You do it more, you do it better each time.
* * * * * * * * * *
The rest of the pictures below are taken in fishing village of Sekinchan and around Pantai Redang. If you’re planning to visit the fishing village, do make sure you’re there early because by noon, there is nothing left to see. Most of the fishermen would have already sold their local catch and returned back home. So, what we did see was ladies working on the squids. 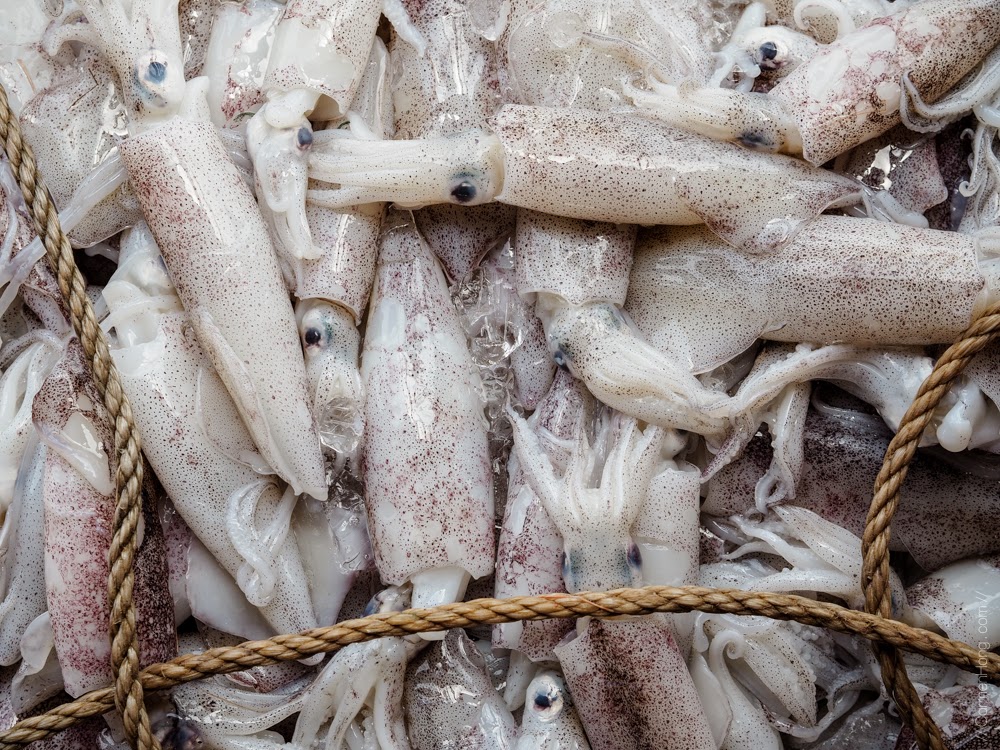 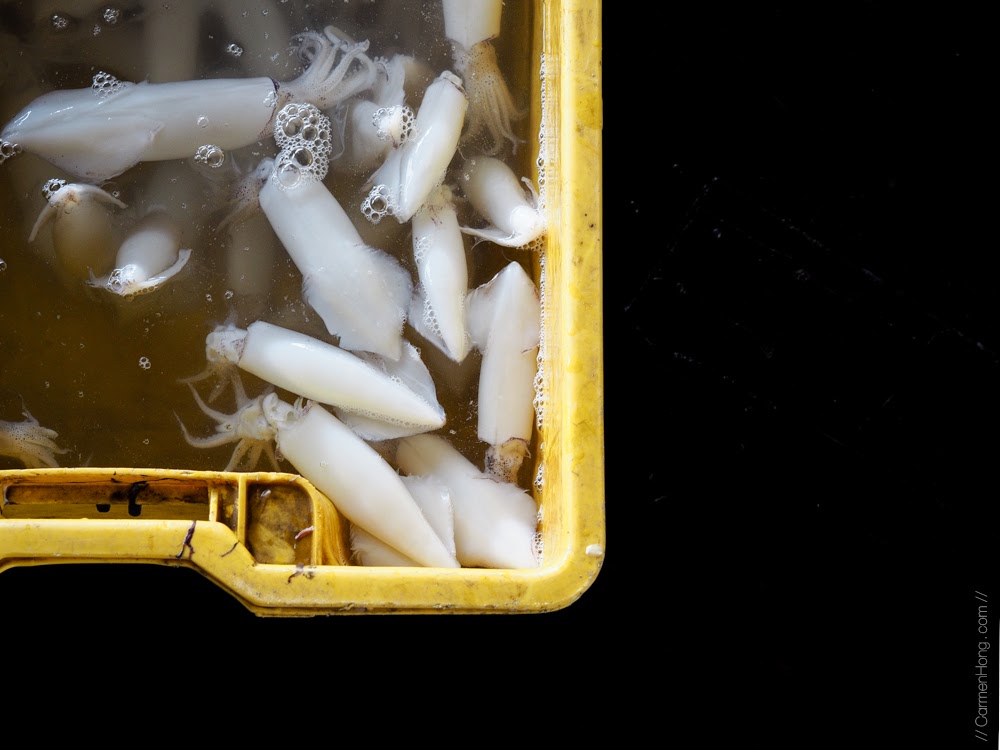 Then, we headed next to Pantai Redang which was a carefully hidden beach. However, it was rather commercialised with quite a number amount of tourist on the beach. You’ll also find tonnes of stalls selling all kinds of knicks knacks; from soapy water with strings to make giant bubbles to stalls whipping out seafood dishes, to souvenirs as well. What I love about the beach was these tiny tree houses along the beach. There was hammocks inside these tree houses and it is oh-so-comfortable to just chill in it. 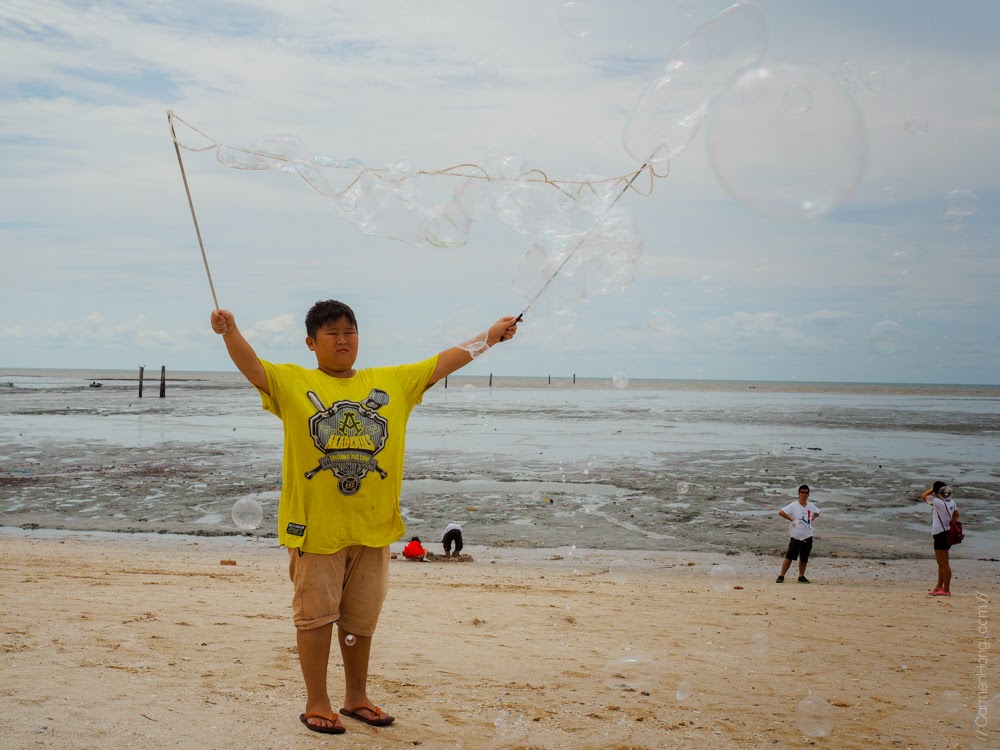 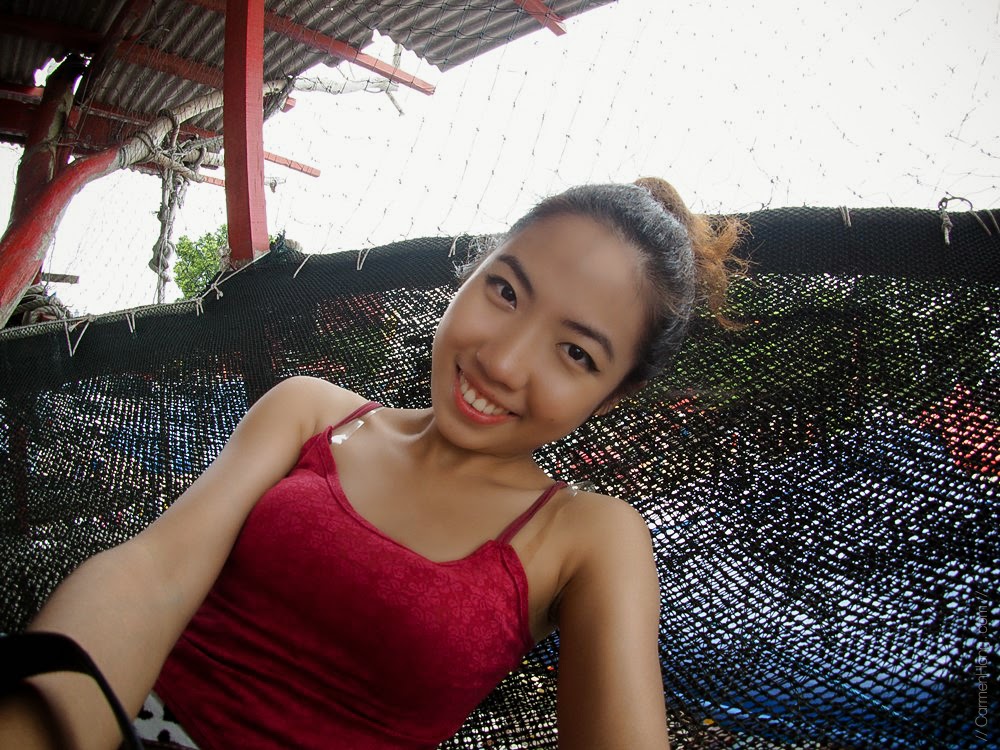 Another tourist attraction on the beach would be the wishing tree, where you can get these strings from the temple nearby and write down your wishes on the strings. You can get the strings for free, and donations are welcomed. There is a trick to tossing the strings, you hold them by the middle of it and with the weights on both ends downwards. It’ll be easier for the strings to be hooked on the branches. 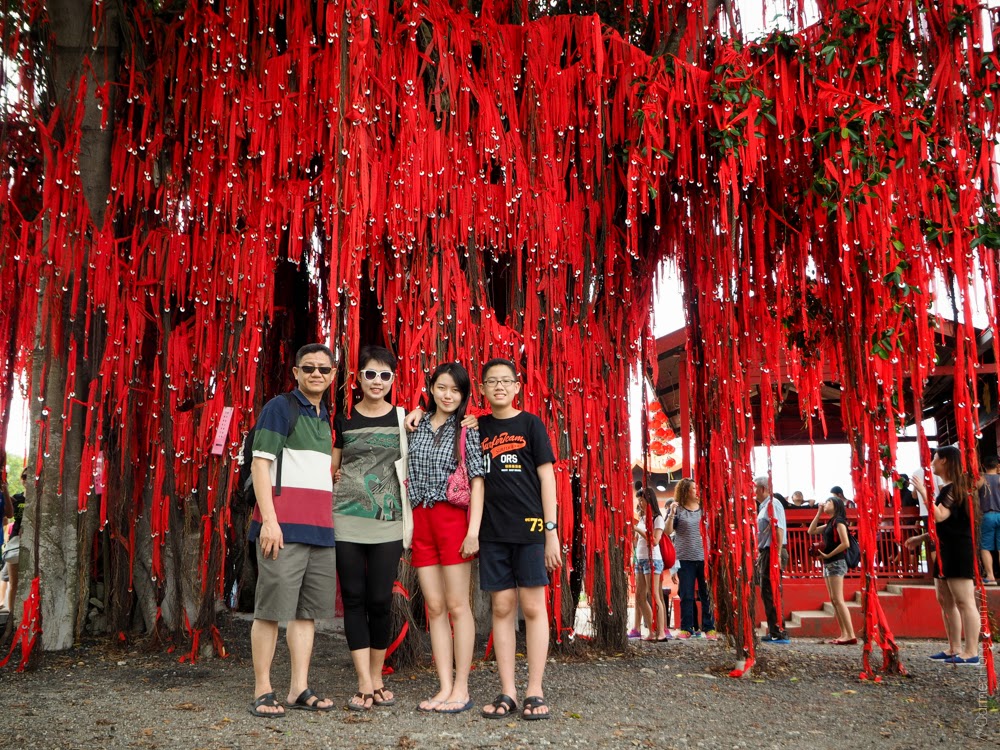 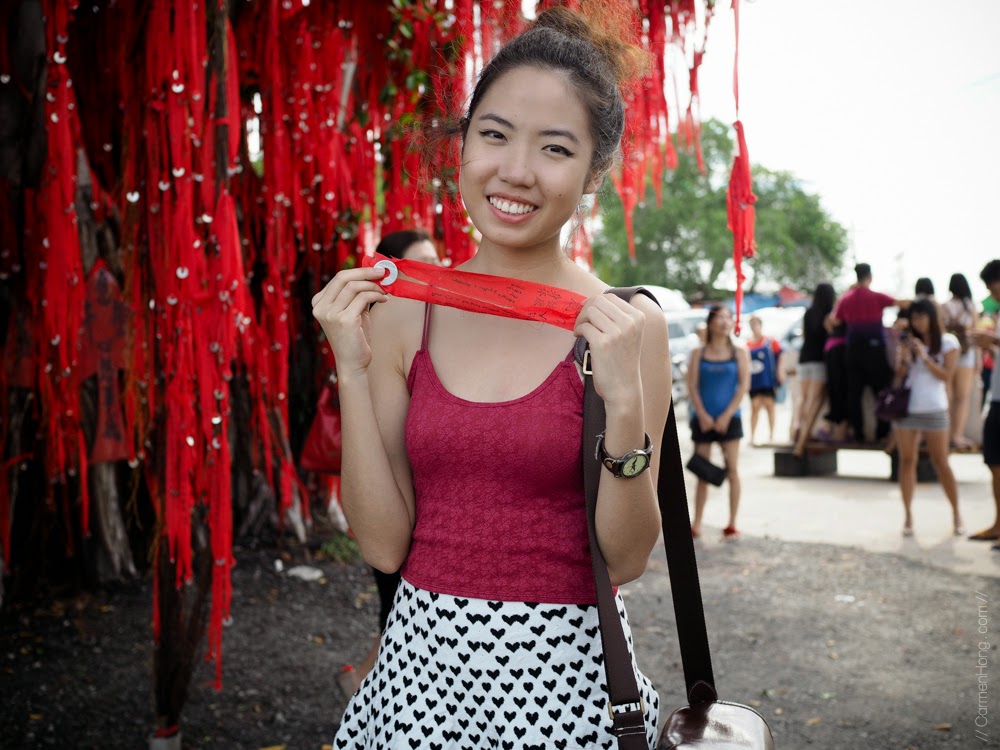 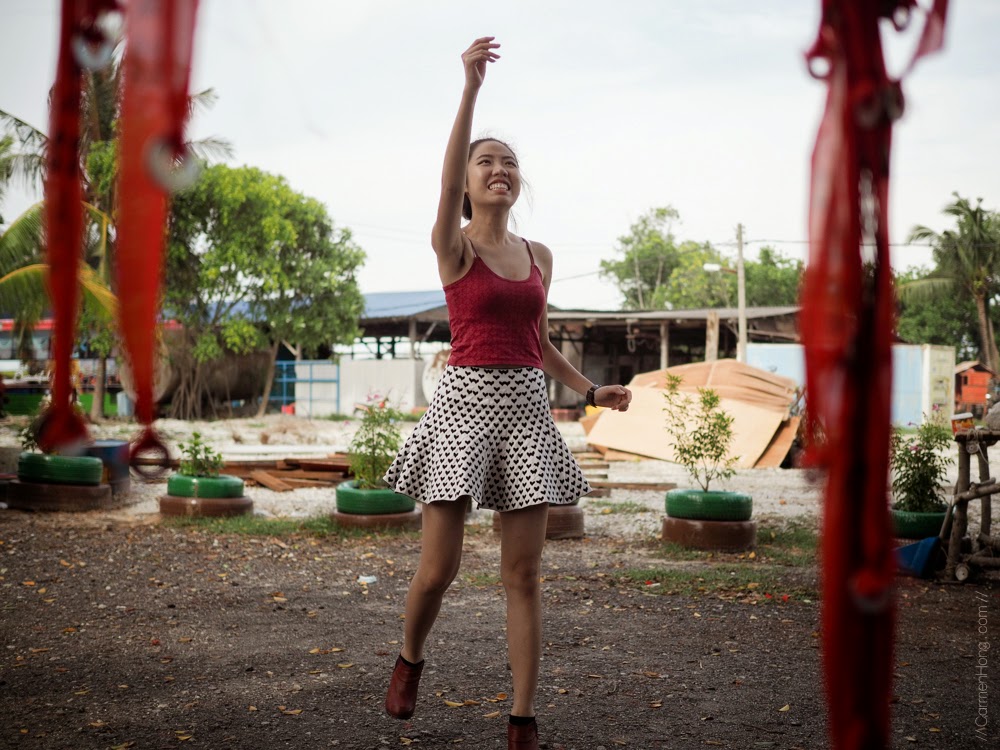 It wouldn’t be a complete road trip to Sekinchan without having some local seafood dishes, and for this, we headed to a place which was recommended by the locals called Cha Po Tion (Jalan Besar Bagan, Bagan Sekinchan, 45400 Sekinchan, Selangor). We had some of the dishes that the restaurant was well known for like the porridge soup, sweet sour spicy noodle soup, and steamed clams. Do note that these are not the actual names, my parents ordered them in Chinese and I had no idea what they are called. 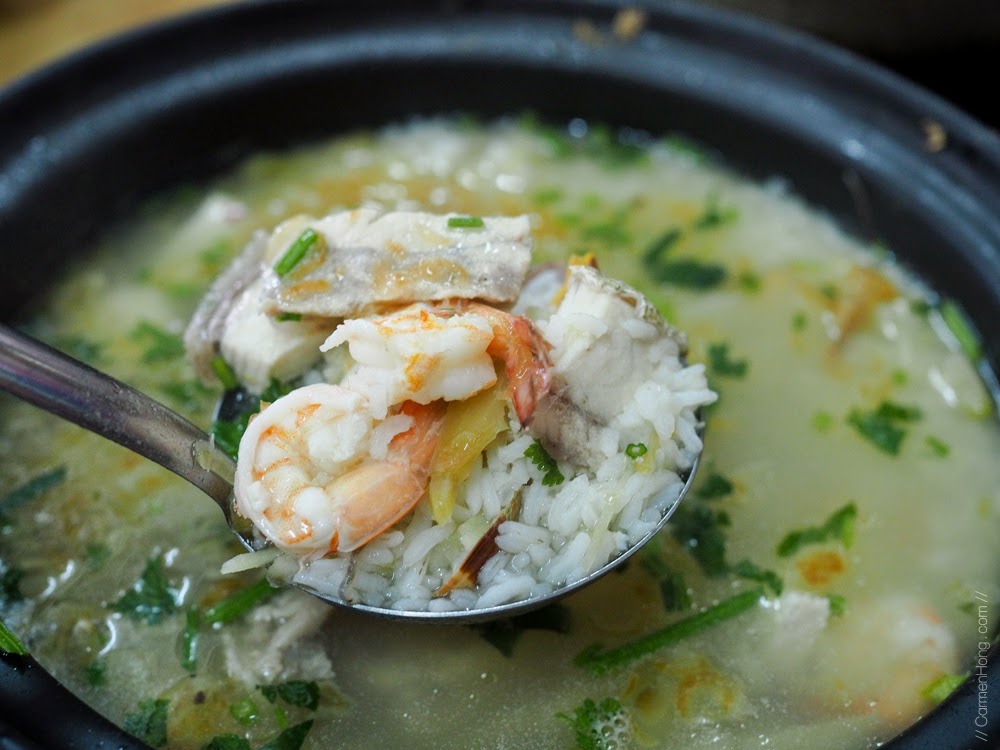 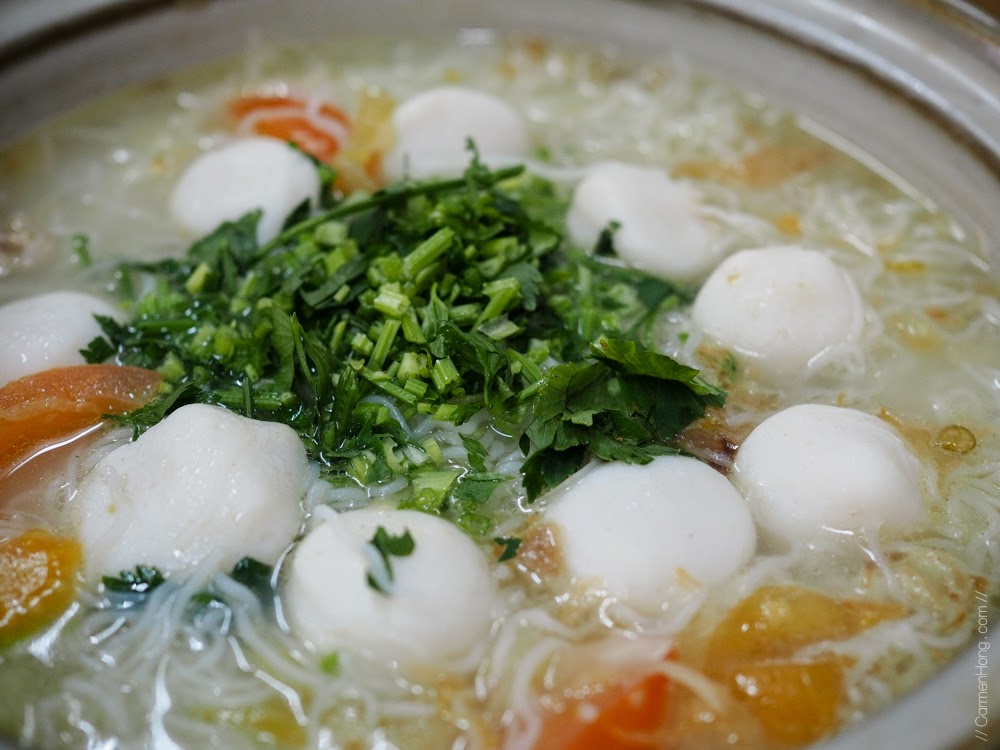 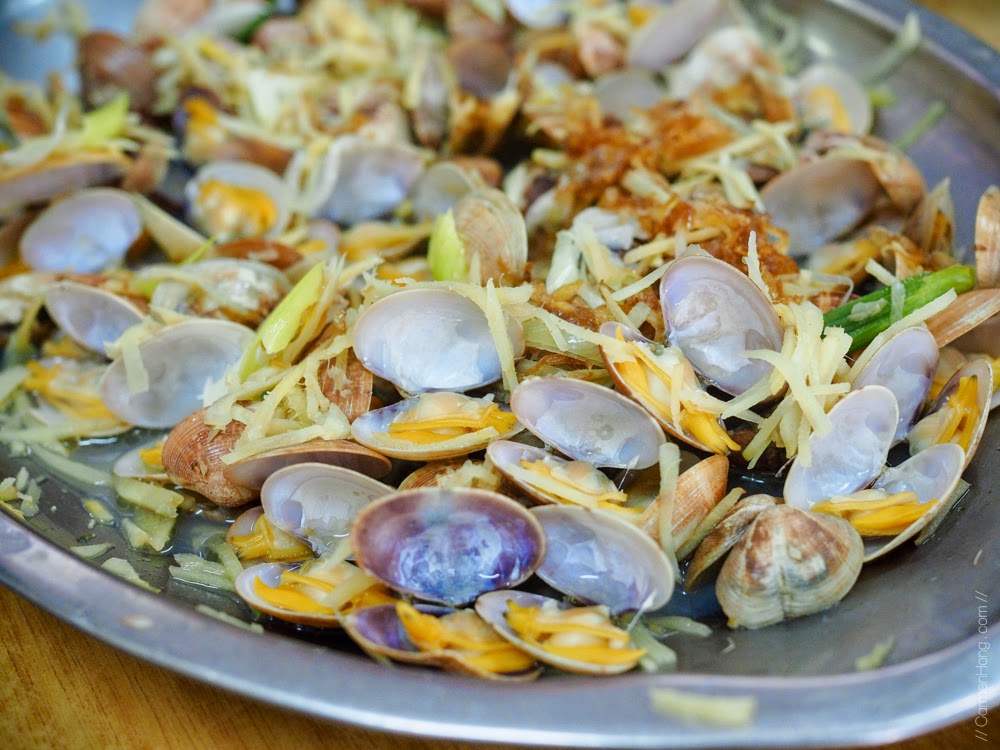 For my second trip with my family, I brought along with me the Olympus M.Zuiko 60mm F2.8 macro lens, Olympus 25 mm f/1.8 M.Zuiko Digital and the Olympus M. Zuiko Digital ED 9-18mm f/4.0-5.6. This time around, I brought an even smaller backpack and have successful managed to place my camera, three lenses, my purse and my cosmetic pouch as well. If my camera and lenses were any huger, I would have probably needed two bags just to fit them all in. 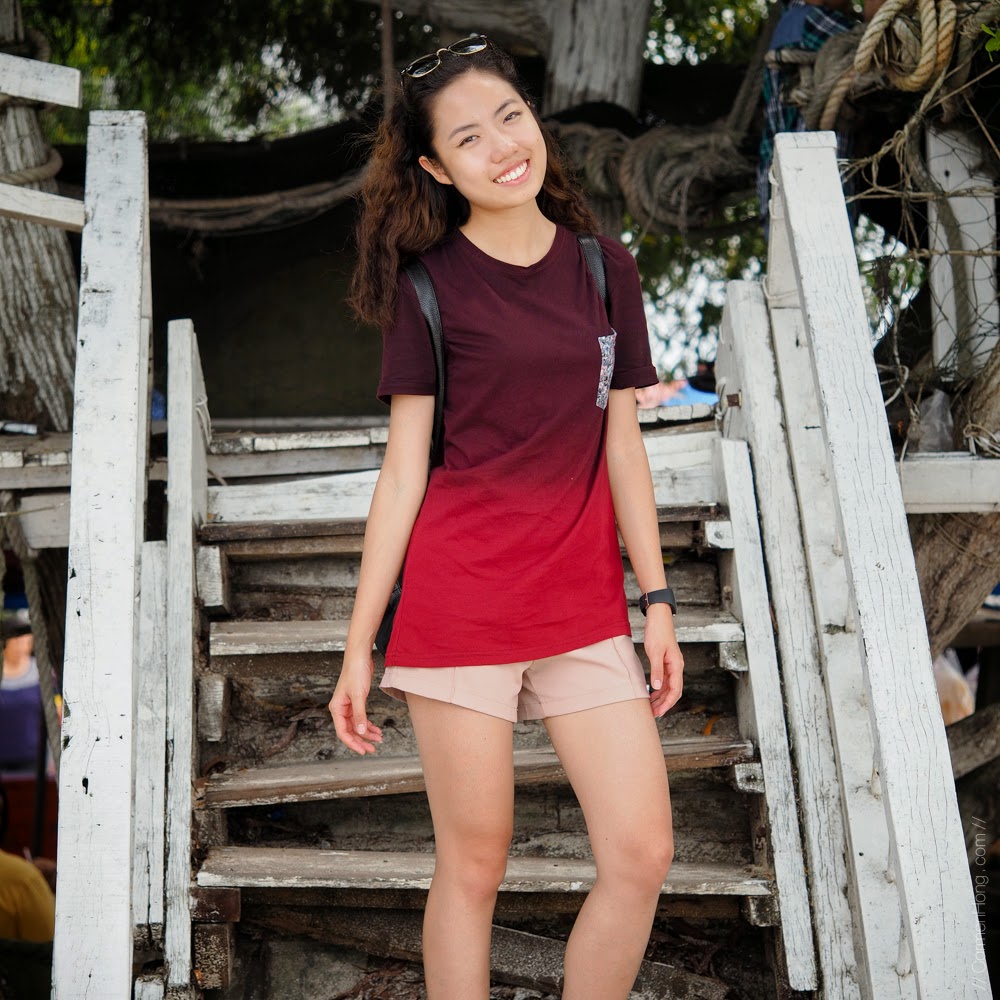 So, that is all for my short post on my Sekinchan road trips. I took the time to share more about the kind of gears I bring on a road trip, along with how I generally feel about using the Olympus PEN Lite E-PL7 as a travelling camera. It isn’t an in-depth review or a comprehensive post on why I like the EPL7 when I’m travelling. It really more about sharing my thoughts and feel generally. I hope you enjoyed the post and thanks for reading! Hoping to talk more about my Phuket travels next!
Till next time,
xoxo
Share

Out & About: The Party Of The Century, coming soon!

Out & About: The Party of The Century at Empire City