The Best Nights of This Month. 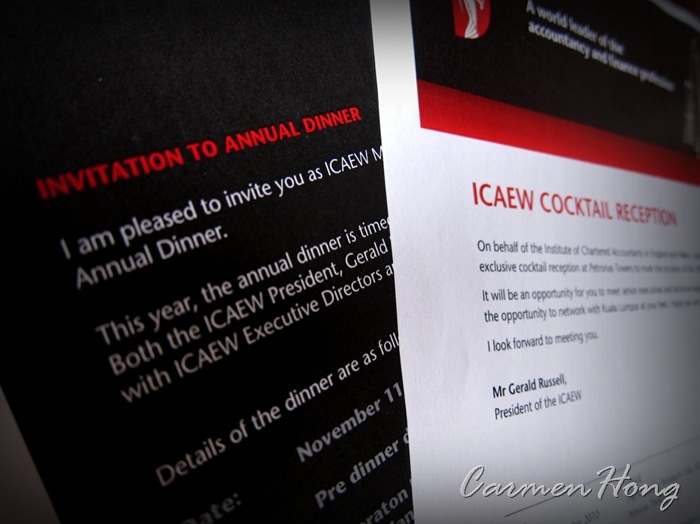 Thanks to Wei Yuen and Pat from ICAEW Malaysia for the invites to these exclusive events. I honestly had no idea how awesome these events was until I was there. I got to help out a little on both days. 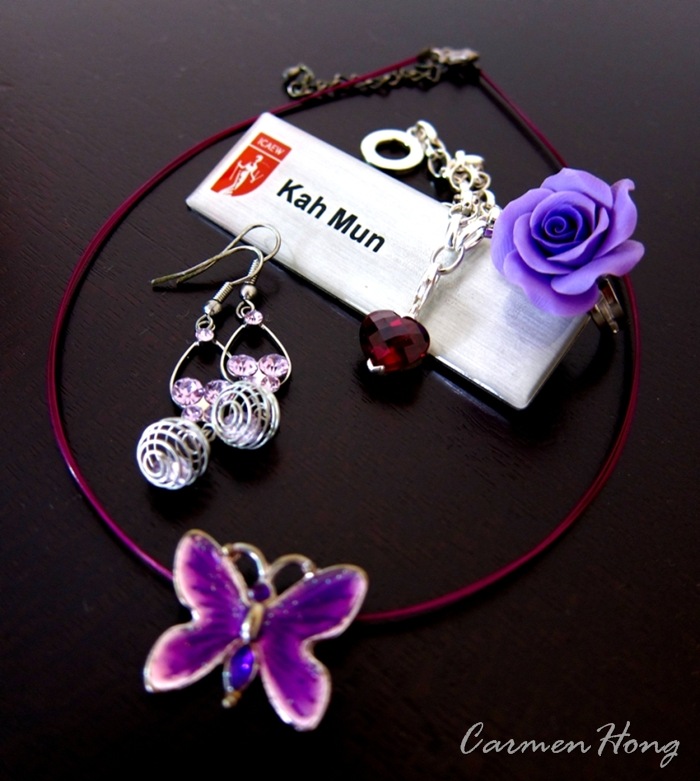 Quite the excited me, I laid down the accessories I was planning to wear early in the morning. Honestly, I think accessories is the key to work that outfit. 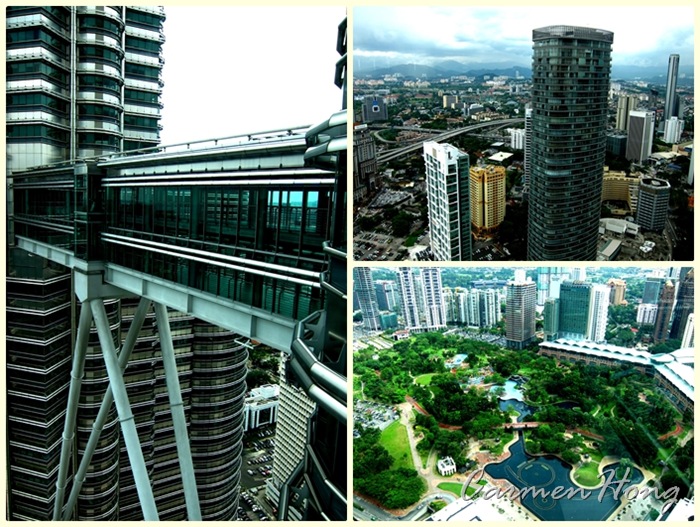 With a view like this, it is kind of obvious where the event was held. It was none other than The Petroleum Club on the 42nd floor of KLCC. 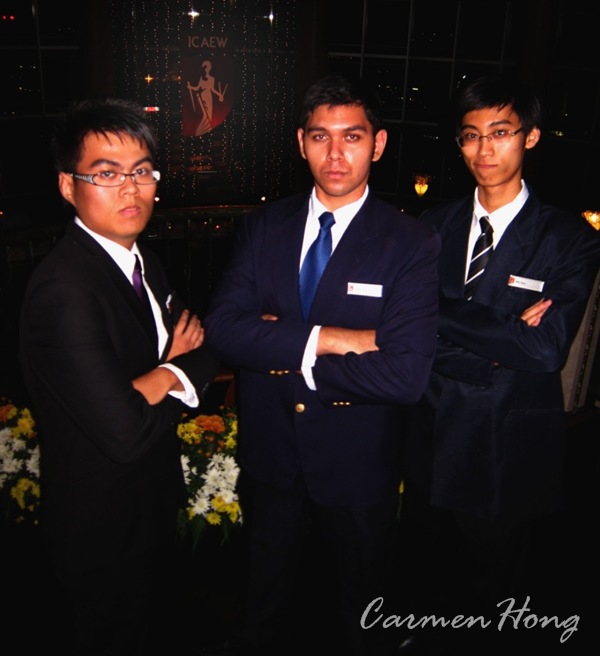 Three macho guys? Nah. I so so prefer guys that smile. The huge teeth-y smile, yo. 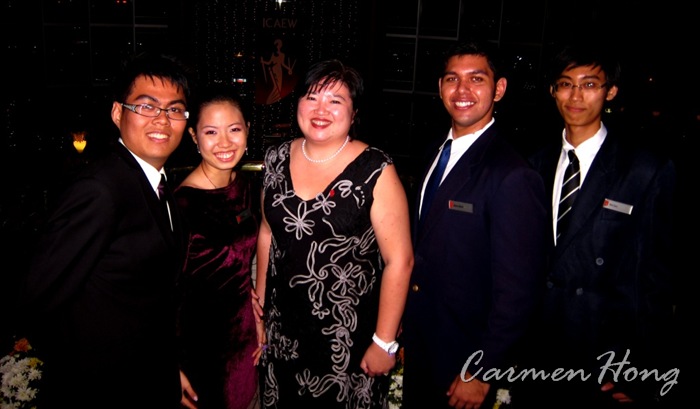 We managed to take a picture with Lim Kit Wan. The lady who can do it all, no joke. 🙂 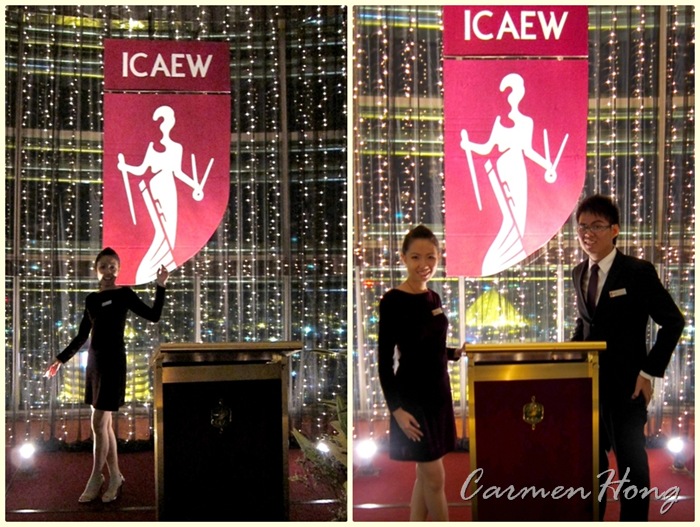 I was trying to imitate the Economia in the picture on your left. But turns out, it doesn’t even look the same. On the right side, it’s me and Cheok. 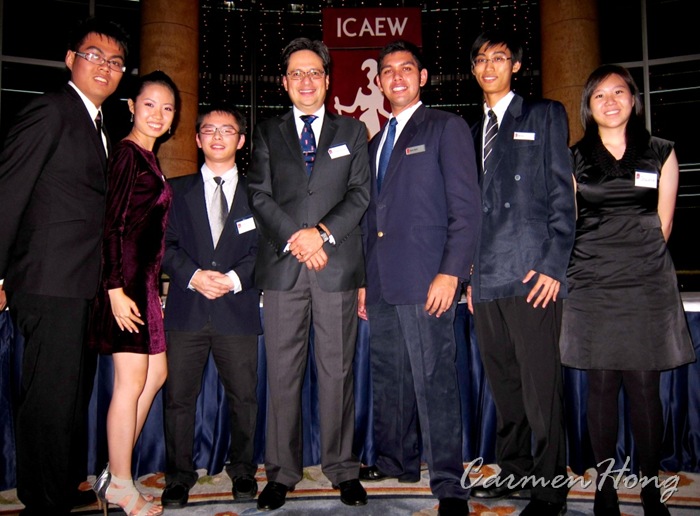 This is definitely one picture for the album because Dato’ Johan Raslan is in this picture! Who is he? He is the Partner and Executive Chairman of PricewaterhouseCoopers, the firm that I am going to intern at from January till March. It is definitely a great pleasure to meet him in person. A very friendly and humble guy. After the party, I kind of regretted not taking a personal picture with him. Gah.

But the cocktail party was like a sneak peek of how the corporate world does their networking session. I was assigned to follow the photographer (which was very super enthusiastic about his job) to take down the names of the important people he photographed. Sounds like an impossible job at first, but it wasn’t so bad after all. I managed to meet the President (Mr. Gerald Russell) and CEO of ICAEW (Mr. Micheal Izza) while doing my task.

I definitely look forward to attending more of these kinds of events in future! 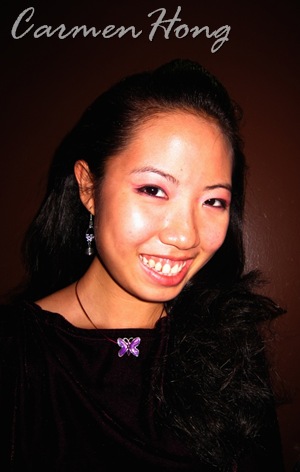 If you can see clearly, my hair is a bit curly after the party because of my hair do. It left my hair oh-so-dry, it should be the hair spray’s fault. Damn. 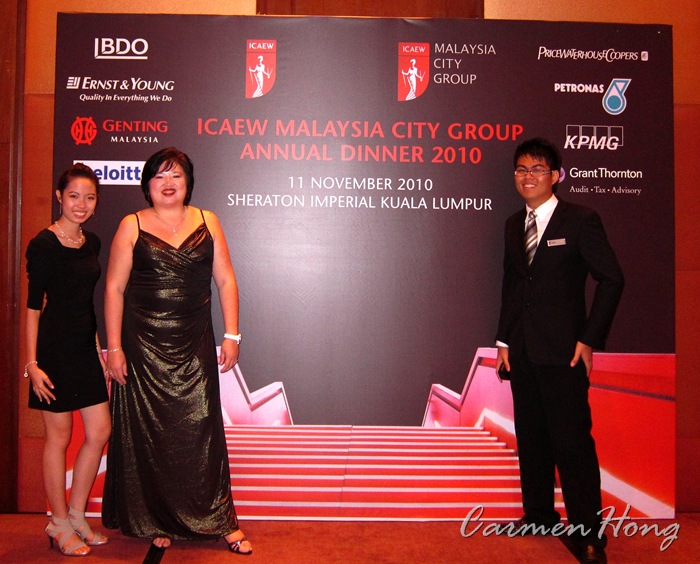 Haha, we couldn’t miss the chance to snap a picture with the emcee of the day  (Miss Kit) along with the back drop for the dinner. 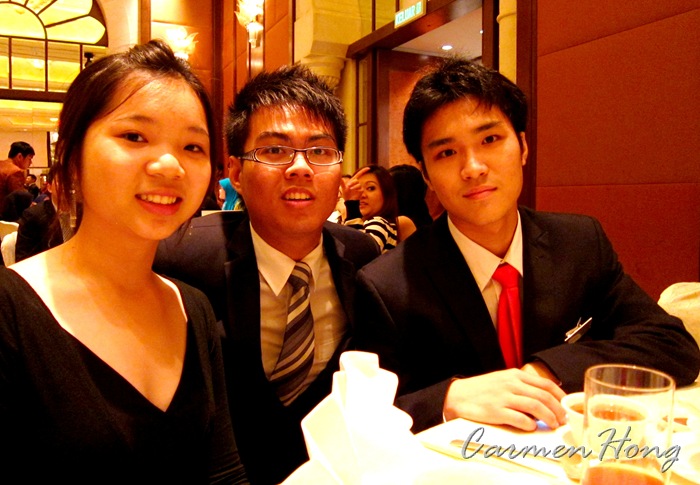 Meet my table mates for Table 31! Jo, Cheok and Reuben. We had fun talking a lot of shits. 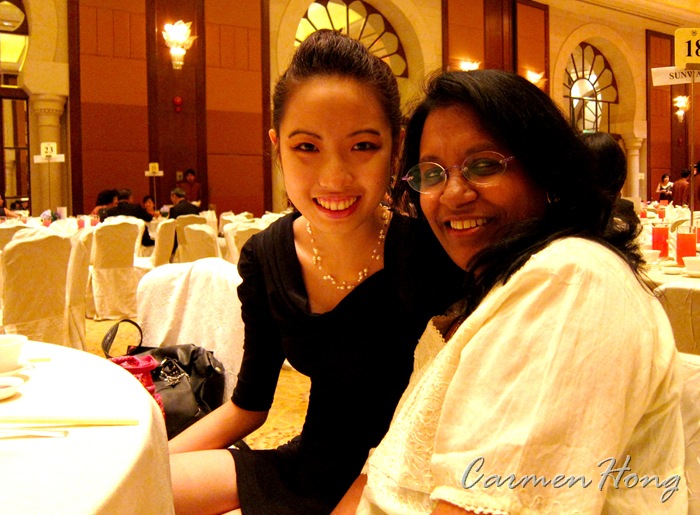 I met Miss Pushpa, my Law lecturer when I was walking around the ballroom. A huge thanks to her, because I scored 88 in my Law finals. Fantastic lecturer! 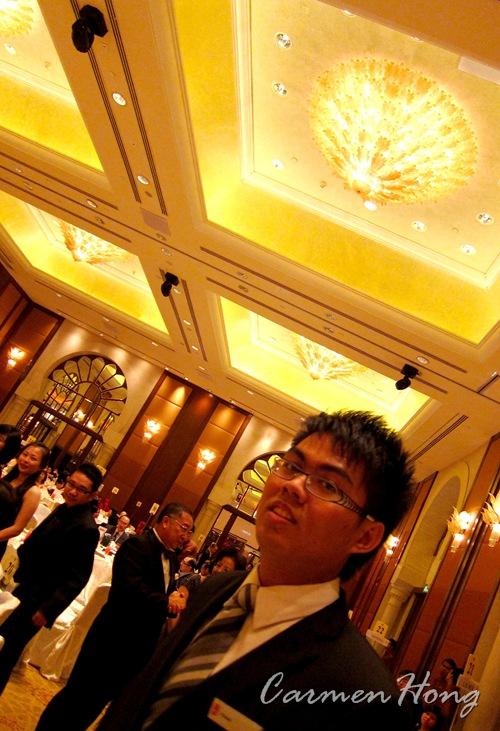 That oh-so-lost face. This was candid, I wanted to snap a picture of the ballroom but decided that shot is so damn boring. So, I saw Cheok in front of me and I called out his name. ‘Snap, click.. ta-da!’ 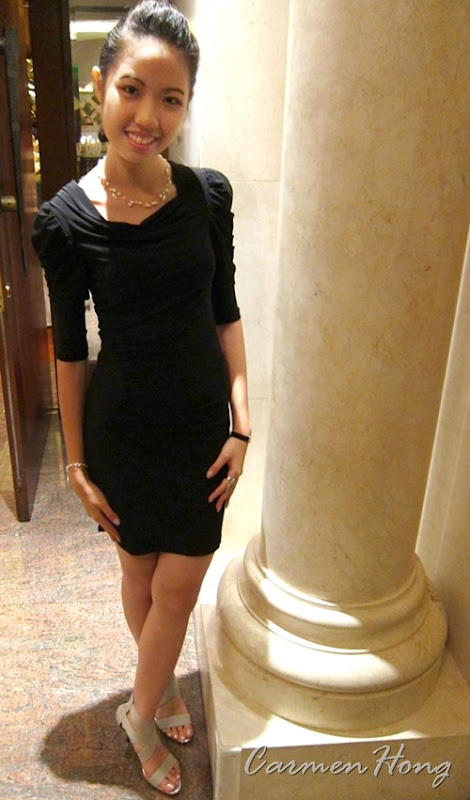 One of the nice full-body shot taken, but I realised how grainy this picture looks. Cammy must have burst the ISO. 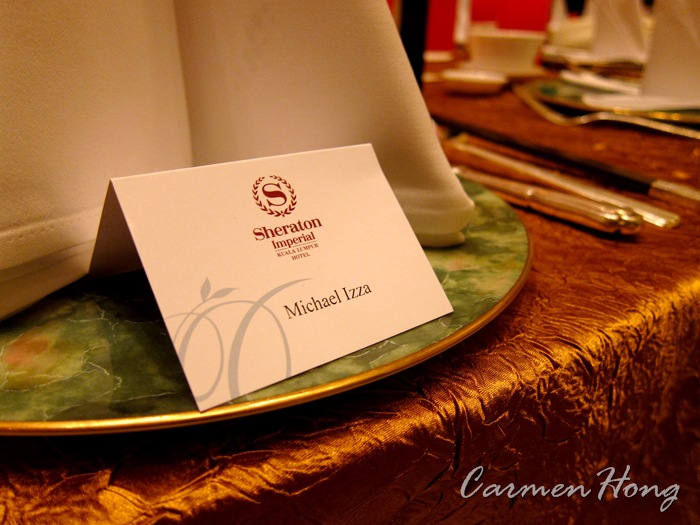 The CEO’s seat! Hahaa, I am such a stalker. I was peering and looking through the name cards on the main VIP table and I thought I’ll try to snap a picture. I like this picture, think the lighting is just perfect. 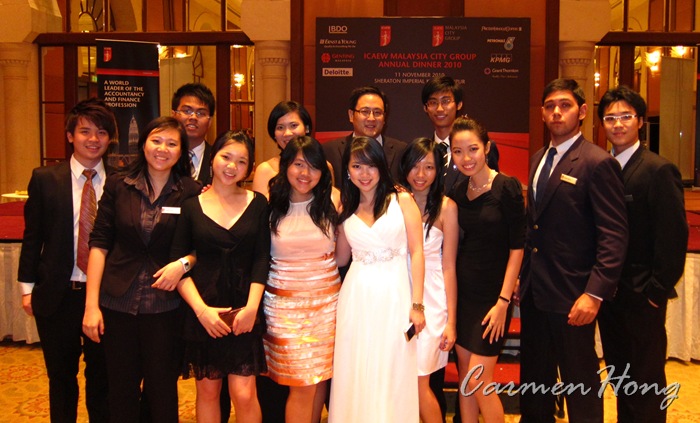 A picture with Mr. Ong and the CFAB students. He was sort of the star of the night because one of his students, Mr. An Li Foong won the First Prize and the Watts Prize for the subject ‘Audit & Assurance’; the subject Mr. Ong taught. He brought his wife along, she is pretty and tall. 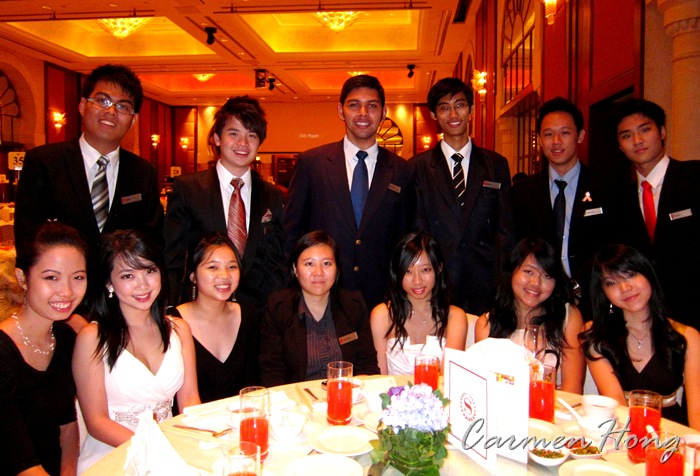 Group picture! The whole lot of CFAB students at the event. 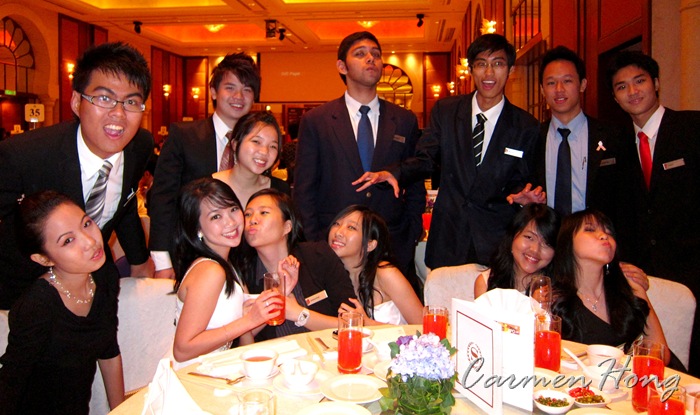 The picture with silly expressions. Hahaa.

And guess who I managed to take a picture with? 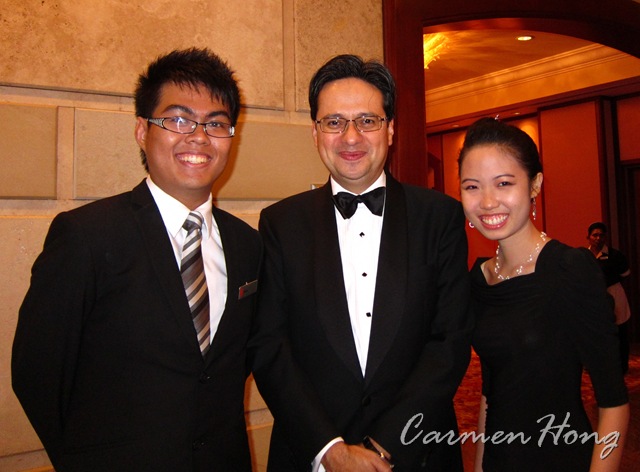 Dato’ Johan Raslan! 🙂 Wish came trueeeee. And I look so overly happy, smiled too huge until can see my gums already. LOL, right? 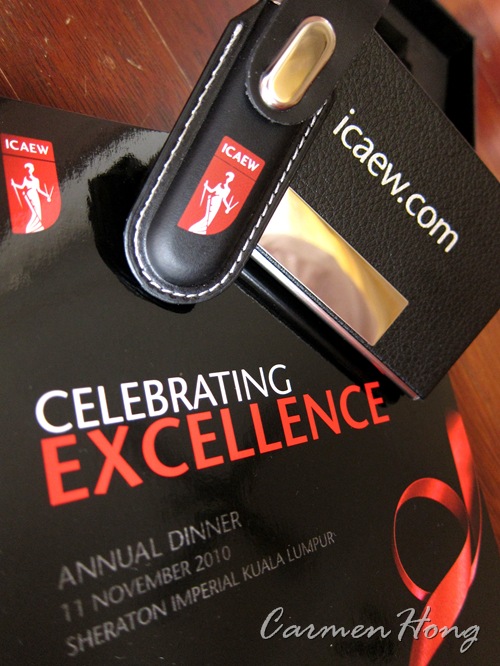 The souvenirs for the dinner. The CFAB-ers were the ones distributing it to the guests that night. We rock. 😀

So, that is all the pictures I have. The dinner was so-so. Some of the food was good, others were just merely edible. Performance was noisy, they had dikir barat in English. And no offence but it sounds tacky. It sounded as though, they flipped open an accounting book and plucked out the words.

Note: I did the make up myself for the first time ever. How was it? How much do you rate?

Earlier in the day, the CEO, Mr Micheal Izza actually visited the Sunway University College. And I was the emcee for the visit. Only got the script a day before the event so I didn’t bother memorising it. I was honestly kind of nervous about it. I imagined myself screwing it up and I did, though it was forgivable mistakes. But I got to learn from it, so it is a good experience. Plus, Wei Yuen later told me that the CEO thought I spoke with confidence! Thanked God the nervousness didn’t show through my voice. Oh, I didn’t really like my outfit either. The Batik top was okay, the knee-length skirt (albeit it being from Sub; my favorite shop) I don’t really like it cause it’s too long! It makes me look short even with heels. 🙁 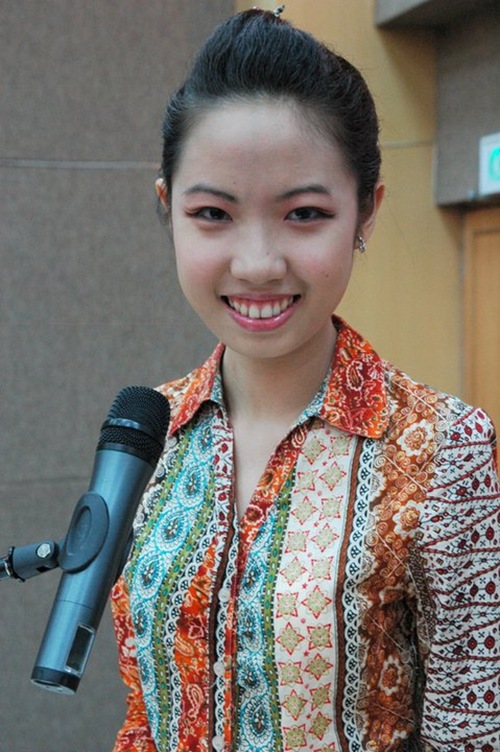 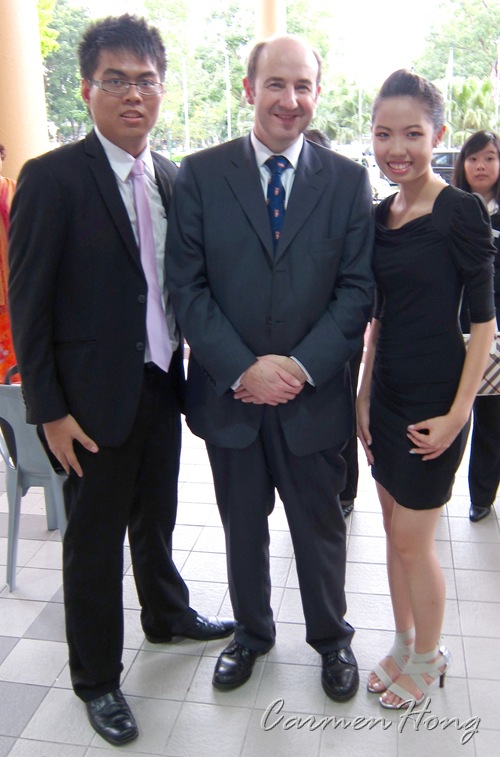 Couldn’t resist taking a picture with the CEO. Hey, it’s not like he comes down everyday right? I changed to my dinner outfit immediately after I emceed. Again, he thanked me for hosting the visit. Well, those were his words. They are all so courteous. Even the Head of Operations and Director Learning and Professional Development, Mr. Mark Protherough approached me and said well done for the emceeing. And Mr. Irwin Menezes, a partner at PricewaterhouseCoopers too!

this was such an awesome week. i wished my weeks were all like that. xoxo.

To Write Love On Her…

To Write Love On Her Arms Day