Honestly speaking, most of my Raya holidays was spent on studying and preparing myself for the Law Final E-Exam. Initially, I thought one week plus was a long time to study for Law. So, I took my own very sweet time to study. Like half a chapter a day and on some days, I didn’t touch the book. I finally realized that if I continue revising this way, I wouldn’t be able to finish the syllabus on the week of the examination.

It is kind of stupid for me to take that long to realize that. In the days to follow, I set the target of reading a few chapters a day; which for me proved to be an impossible feat. But in the end, I did manage to finish all the chapters with the questions along – of course, it took me many midnight oils to burn to accomplish that. So now all I’ve got to do is wait for my results to be out later in the day, should be around 4.30 pm.

[Edit: The results is finally out. I passed. Oh, boy. I’m washed with relief.]

It was obviously a very mundane routine for me during the holidays except for some occasional incidents involving Kah Lok. Trust me, his antics are really humorous. Take this for example. 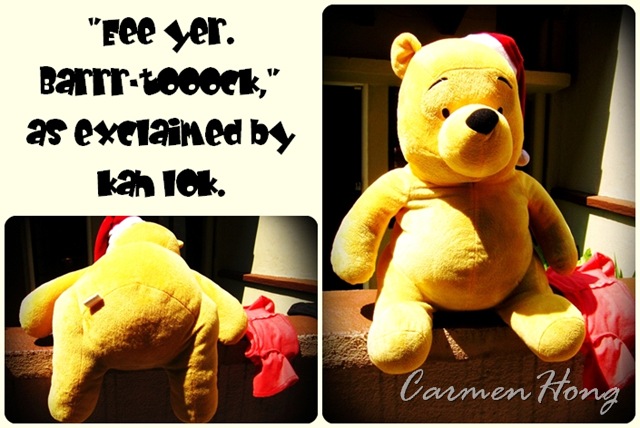 He saw the Pooh bear’s butt from the kitchen and he said, “Eee yer. Barrr-tooock.” And it’s so funny if you can hear the way he said it. 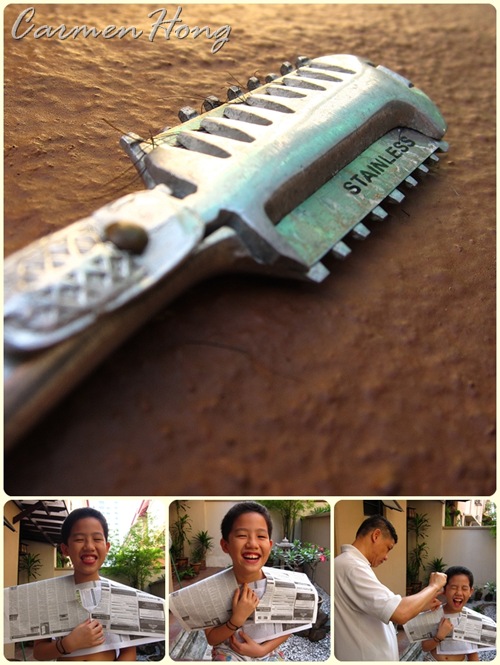 In the very same week too, my daddy trimmed Kah Lok’s hair as it was getting bushy. Plus, we had this old *idon’tknowhatitiscalled* thingy (shown in the picture above). All you got to do is comb the hair, and voila! It’s trimmed.

Mommy decided to hose him down with water after that because he wanted it. Haha. He really like the water. But funny thing is he doesn’t want to learn how to swim. He rather just floats around.

The last day of…

The last day of freedom?

The Best Beef Noodles in…

The Best Beef Noodles in the World