#TSDayOut to Banting – Part I

Just recently, Tourism Selangor organized yet another TSDayOut after a short hiatus due to the Ramadhan month along with the other festivities lined up. They kicked things off with a trip to Banting this time. And I have been lucky enough to join them again after my last #TSDayOut to Subang Skypark. Click on the link to read about what we did in the Skypark, pretty fun stuff for a seemingly normal place.

Just a short brief of what we did this time around; we started out the trail with a bus ride to have ‘Nasi Lemak Sotong’, visited the ‘kerepek’ factory and finally, we visited the Paya Indah Wetlands. The highlight for the trip for me would definitely be visiting the wetlands, although I must admit that I didn’t know anything about it at all. Sure, I heard of the place before but I don’t actually know anything about it.

I have decided to blog about the rest of the #TSDayOut on another separate post and to just concentrate on my favourite part of the trip; which was the crocodile feeding at the Paya Indah Wetlands. It was my first time seeing crocodiles being fed. Of course, I have seen it on National Geographic but it’s a whole different experience seeing it in person. Besides, this called for a photo opportunity!

I was so excited, I was at the front row (right next to the lorry with the food!) along with all the kindergarten kids too. Haha, I’m amazed with the child in me sometimes. The food they feed to the crocodile stinks really bad by the way, I’m surprised I didn’t feel nausea and sick. Probably too excited to feel anything else.

Meet my lovely models for the day!

I briefly heard from the guide who mentioned that these crocs were of a more ‘ganas’ type than those in the National Zoo. There are about thirty to forty crocodiles living in the pond, but I’ll only feature some of them today. :p 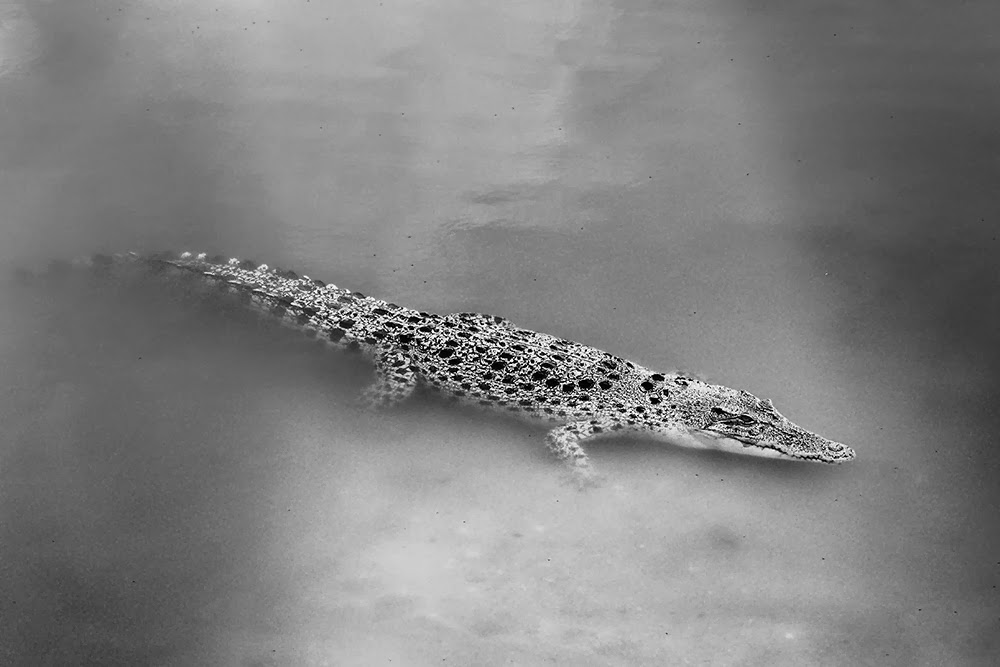 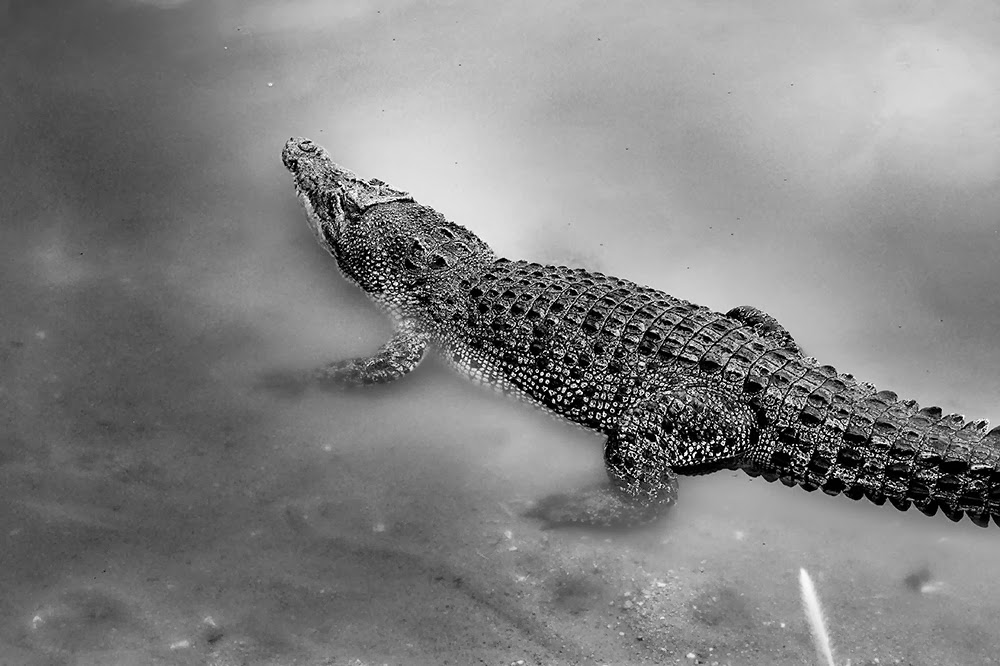 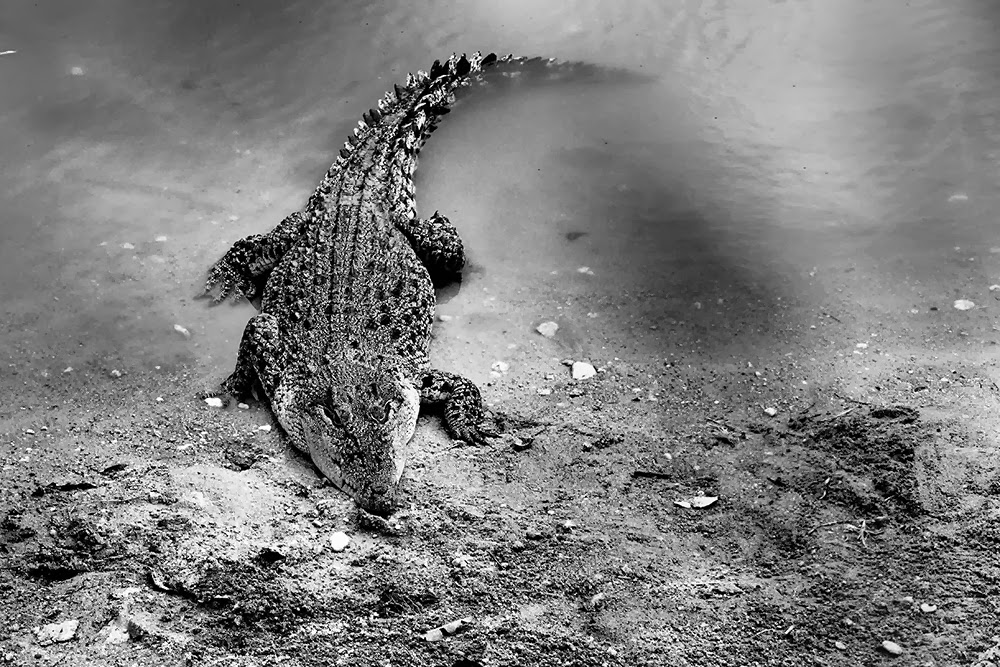 Things I never knew was just how much I actually enjoyed photographing the crocodiles. In fact, I had the most fun time taking pictures at the Crocodile station in the wetlands because it was the only place we stayed the longest time, giving me ample time to shoot. I never been one who have been able to shoot under time pressure and constraint, but this is a good training because there will come to a point that when I shoot, I won’t have the luxury to get inspired and compose a good picture. 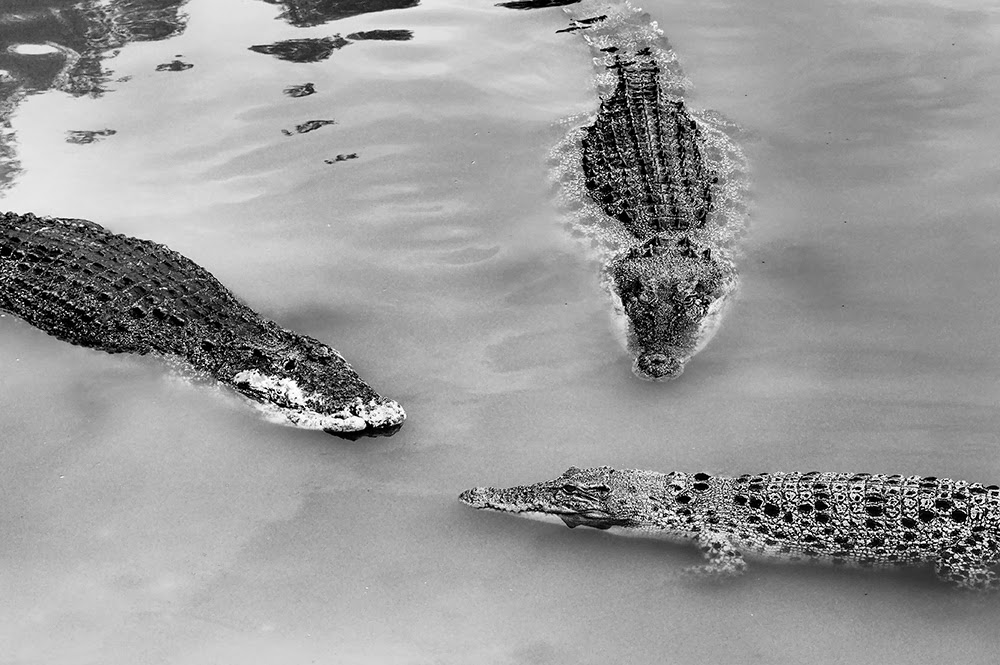 Group meeting
We were lucky on that day because the Paya Indah Wetlands management team had decided to feed the crocodiles for a second time, even though they just fed the crocodiles earlier. The crocodiles actually only need to be fed once a week, and so if you want to watch the feeding, do drop by on xxxx 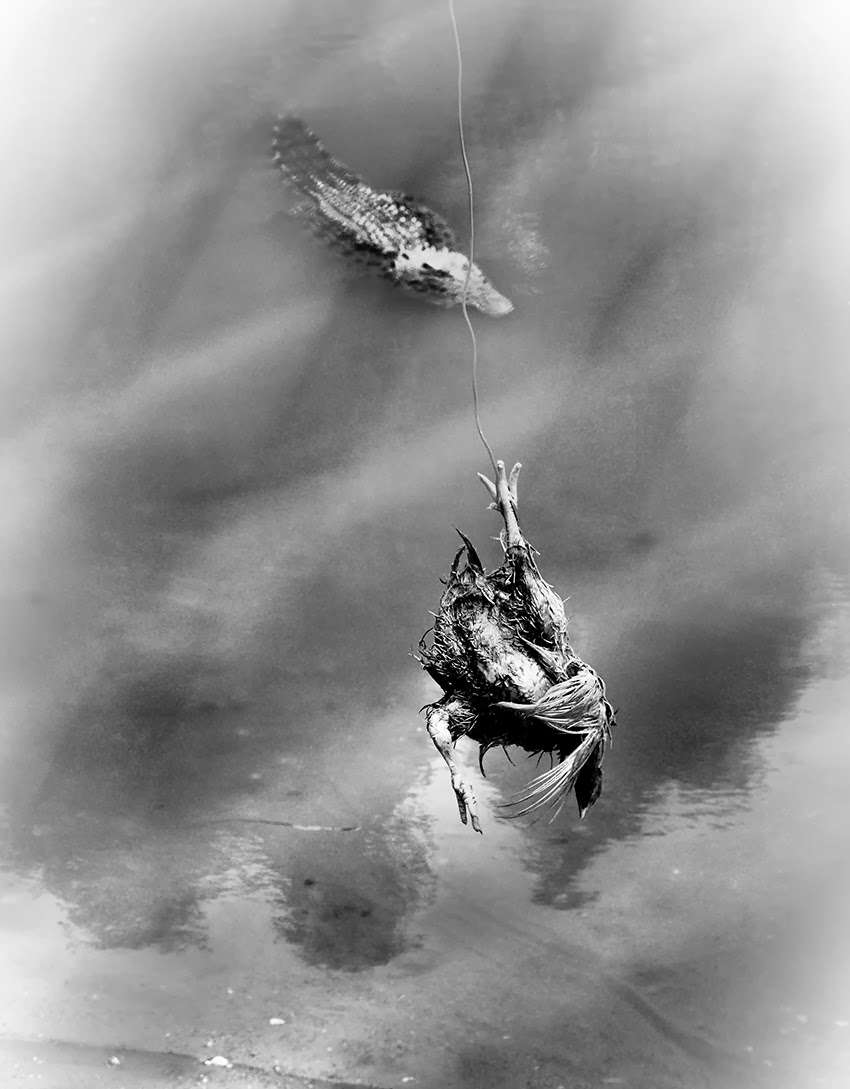 These chickens are hooked on a zip line and the feeder will have to slide it down along the line, moving it upwards and down to attract the attention of the crocodiles, as though it is a live chicken. 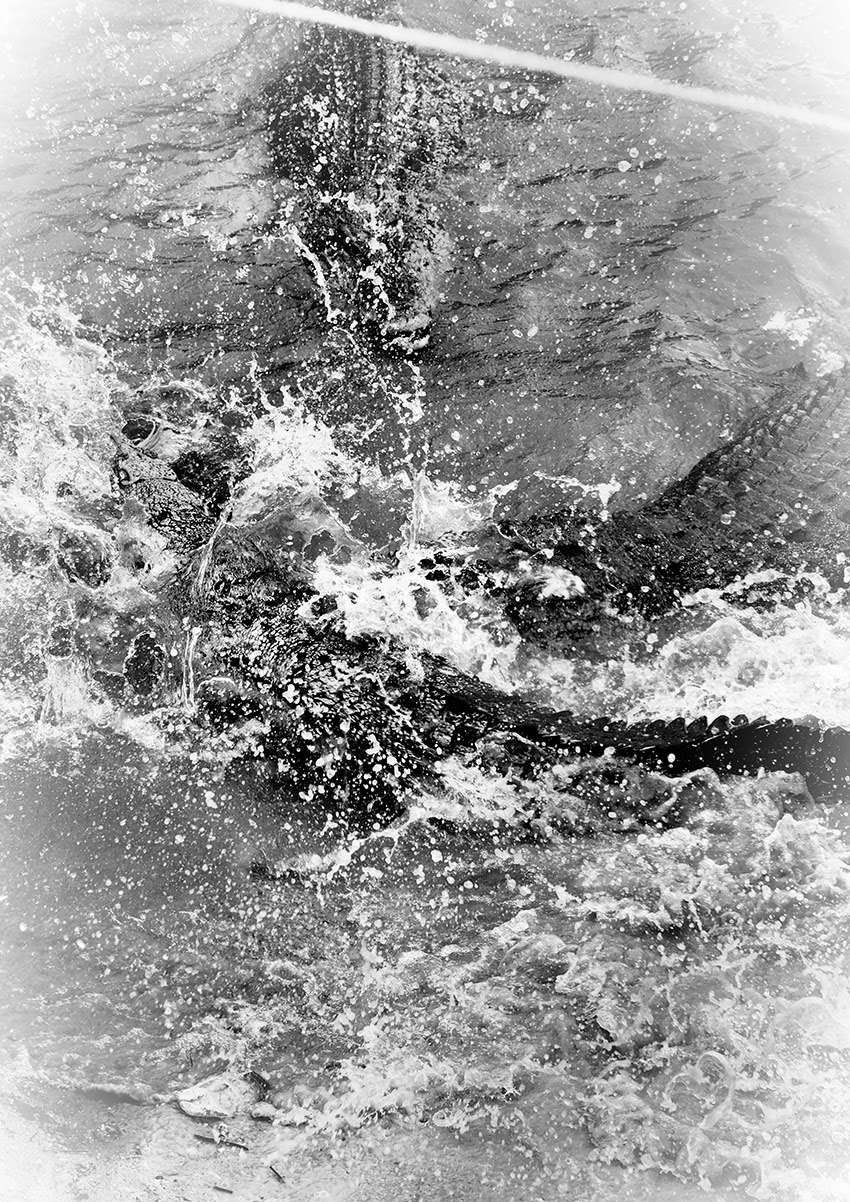 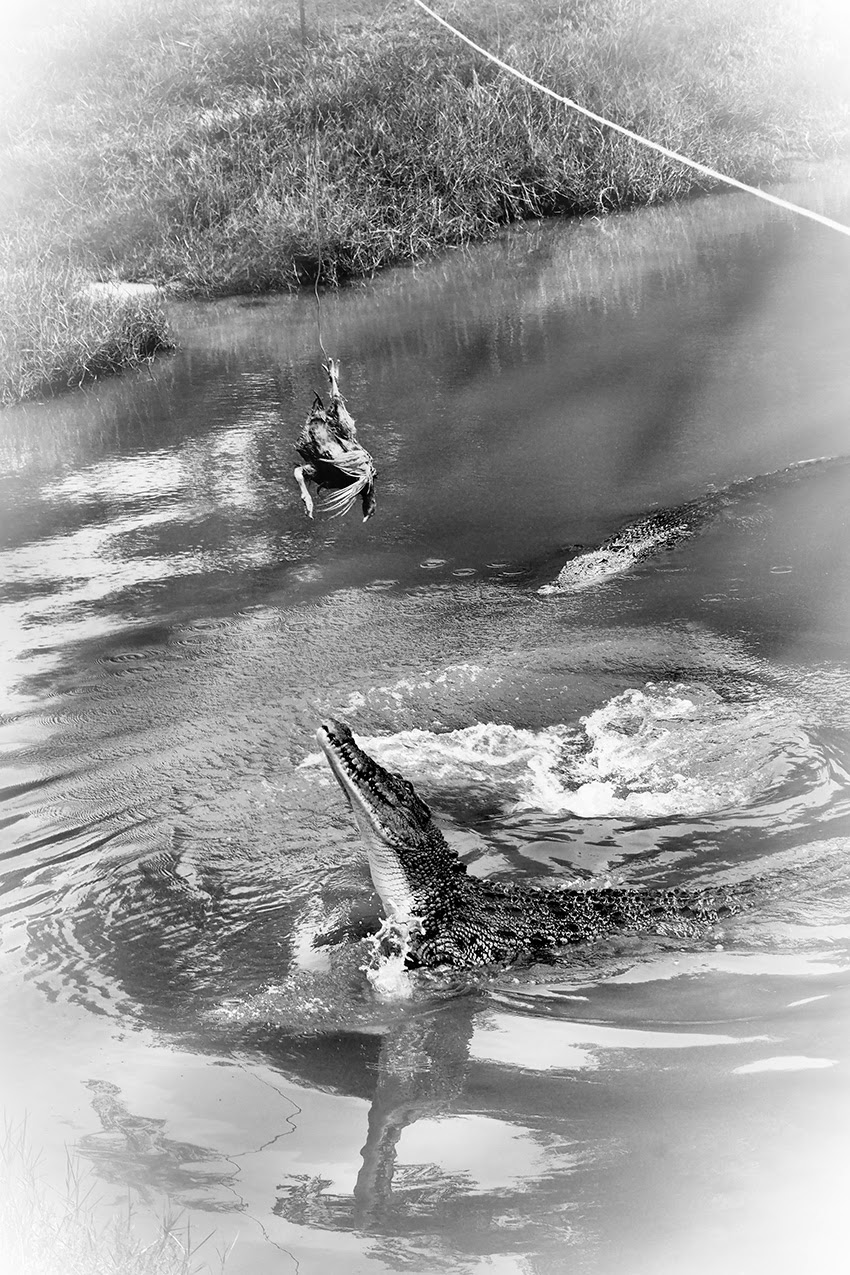 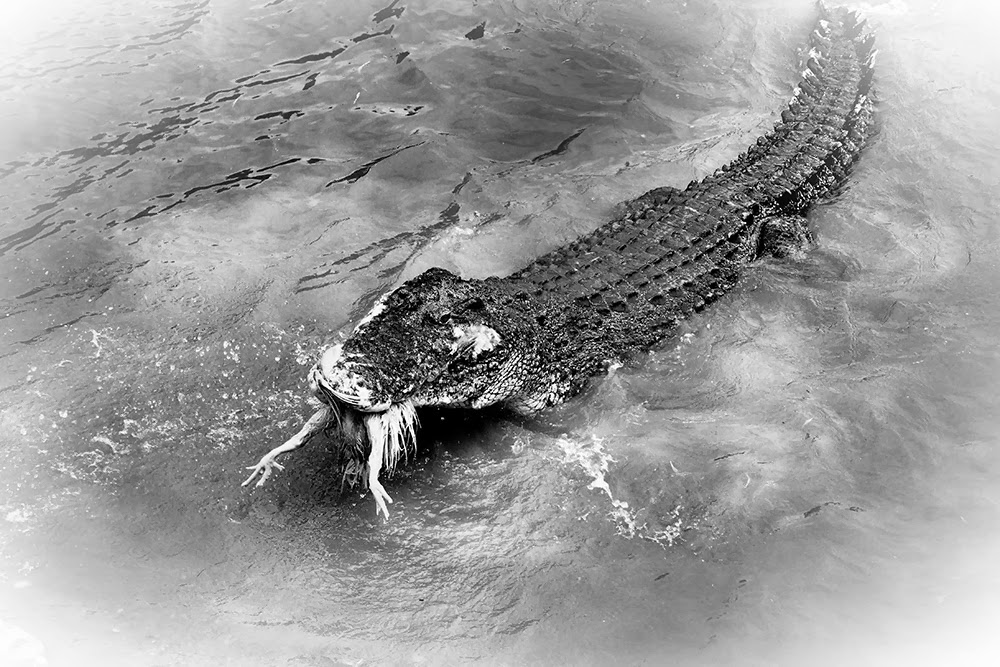 Happy crocodile!
* * * * * * * * * *
I think this is the first time I’m publishing a whole set of BW pictures that are straight from my camera. I don’t think it’s a huge secret that I post process most (actually all my pictures before they go up). But lately, I realize I have been spending too much time on post processing and at the same time, I’m shooting a lot more. At the end of the day, I would rather shoot more than to spend the extra time at holed in front of the computer with my Lightroom, unless it is completely necessary.
I hope you enjoyed this set of pictures, these were shot with the Olympus EPL5 with the Olympus M.Zuiko Digital ED 60mm f/2.8 Macro. You might have noticed some dark shadows shaped like the alphabet “x” , those are actually the shadow of the cage. I tried to shoot through the hole of the cage, hence the shadows.
By the way, I think one of the pictures from this set actually won the photo challenge for the day! 🙂 In every #TSDayOut, there is a shooting challenge for the day with a theme. This time around the theme was Nature, and we had to pick our five best pictures. Two of them are from the the set above with another one of a coloured version of crocodile (pictured below). I submitted two other pictures which I will publish in another post. Out of the five, I actually don’t know which one won, but you’ll get to see it all anyway.
It felt great that my picture was picked as one of the best photos for the day and also because I was the only female photographer too. :p Girls’ power, ftw. This is all so encouraging and I will continue to keep shooting. Even though the 60mm macro suffered from some beatings that day and now have ‘battle scars’. 🙁
* * * * * * * * * *
Before I end the post, here’s a few more pictures I took but this time with colour. 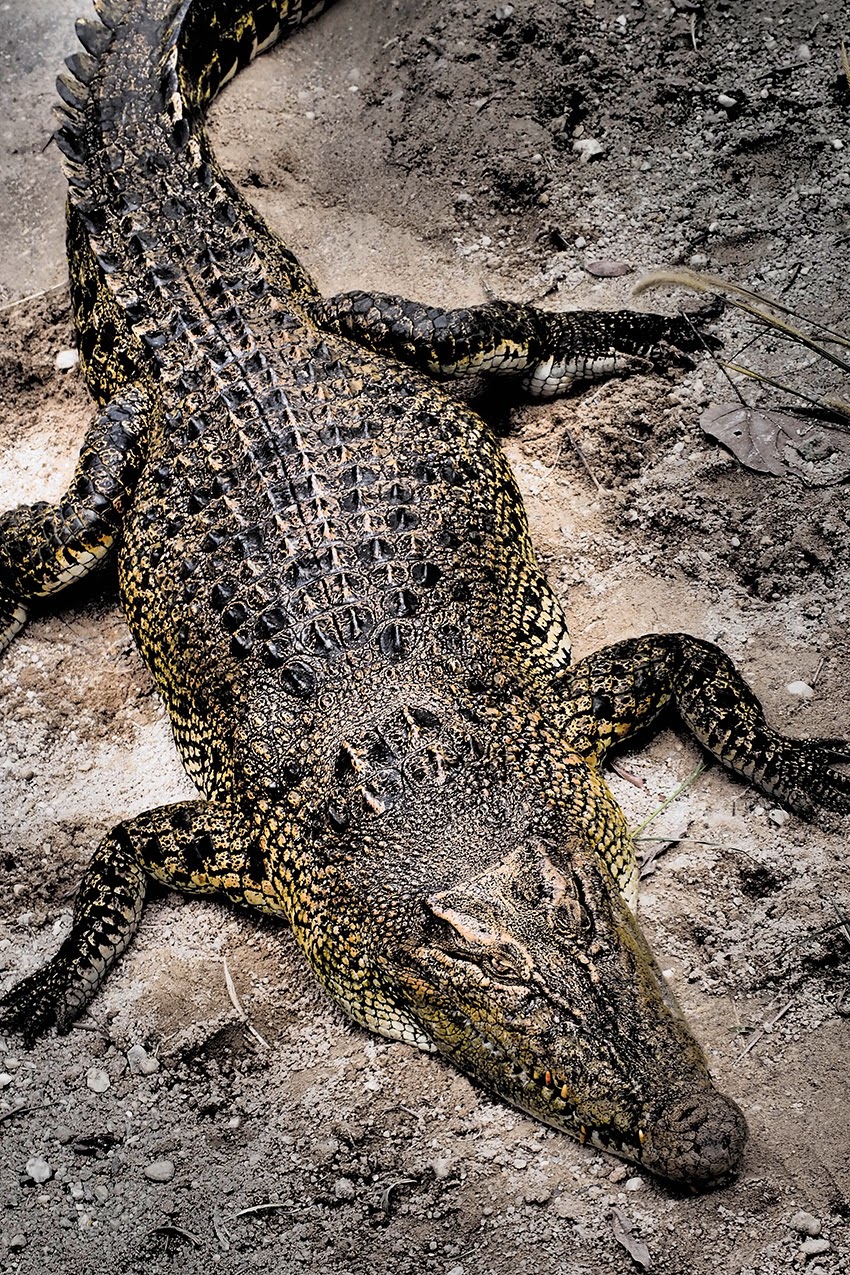 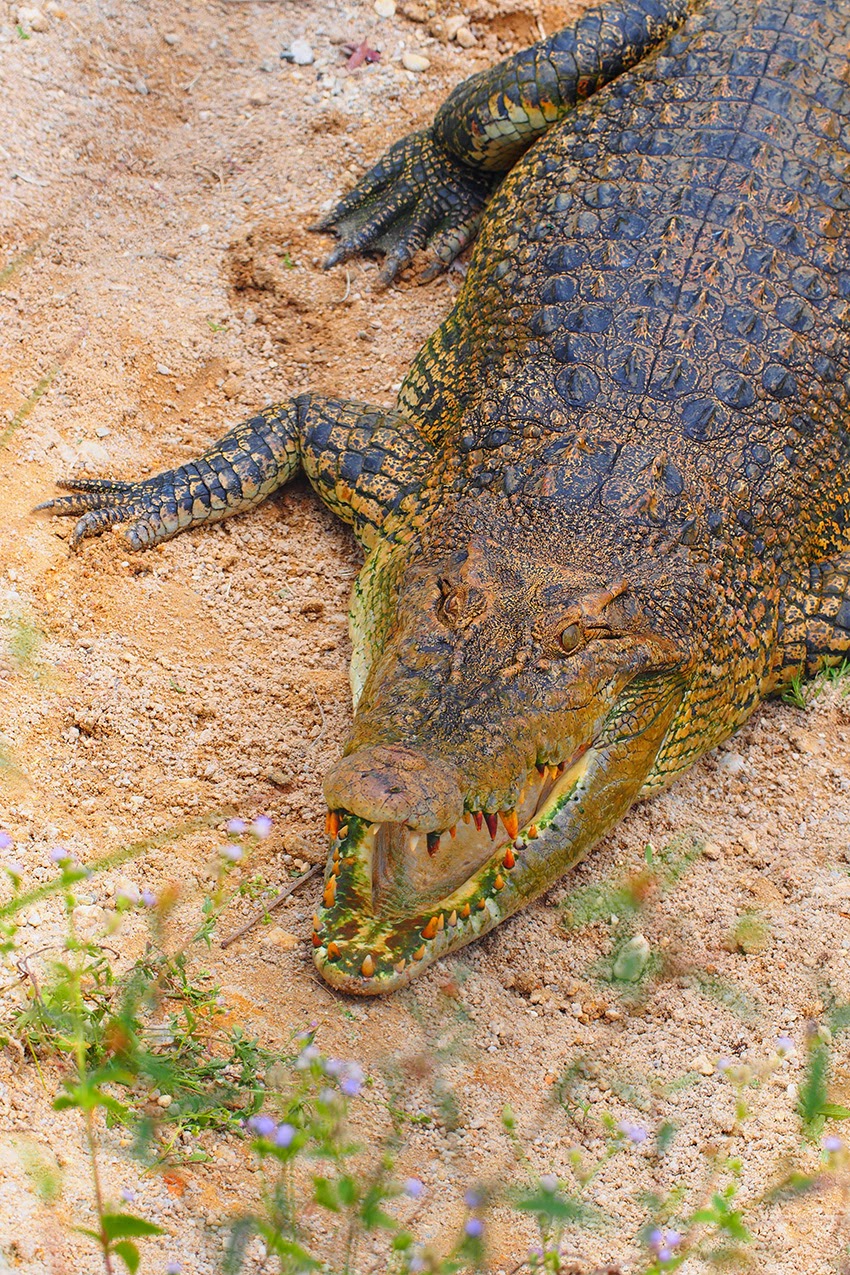