Every month or so, the awesome peeps from Tourism Selangor will organize a fun day out. It’ll be somewhere in Selangor (of course!) and it will probably be at a place you never thought of going to for a day trip. That’s the whole concept of the #TSDayOut, short for Tourism Selangor Day Out. Now, I have been following @TourismSelangor on Twitter for some time and I have always somehow seen posts about the TS Day Out, but I never did have a chance to join them. I never thought I could, because I never came across a place to sign up for it.

Until one fine day, of course. It was a fine day indeed; the skies were blue, the sun was shinning and the birds were chirping when I actually came across a tweet by Tourism Selangor that, the applications for #TSDayOut was open. Yay, like finally! I signed up for it, waited patiently with fingers crossed that I will finally get to for it. And ….

Ta-da! Obviously, since the post is titled as such, you would have known that I was selected to join the Day Out but still.. Haha. It is pretty exciting to finally get to head out one of these trips, I’m like a virgin #TSDayOut-er. And this time, we are brought to the Skypark Terminal of the Lapangan Terbang Sultan Abdul Aziz Shah. Do you know what my dad (or maybe almost everyone else I know) call this place? The old airport.

Completely honest, I only vaguely remember going there once when I was really really young. I don’t remember much since, but the airport didn’t that much of impression on me. Years later, going back there, I am surprised at how modern it looks like. It almost look like a shopping mall, if I’m not mistaken they have refurbished it.

So, what did we do in Skypark Subang? 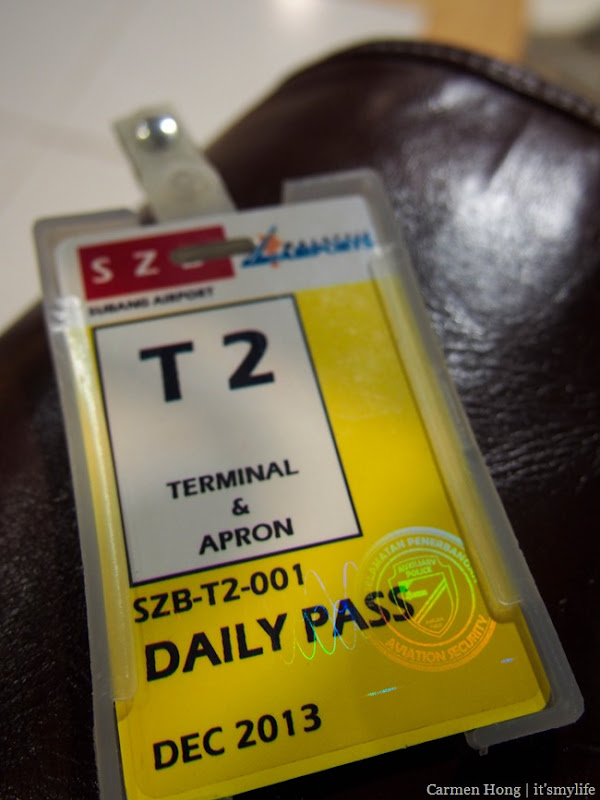 We started the Day Out with a tour of the Subang airport, with each of us being given a pass, allowing us access to the areas of the airport. Apparently, if you lose this pass a police report has to be made. It is that strict, but hey, this affects the airport security. Hence, the need for that. 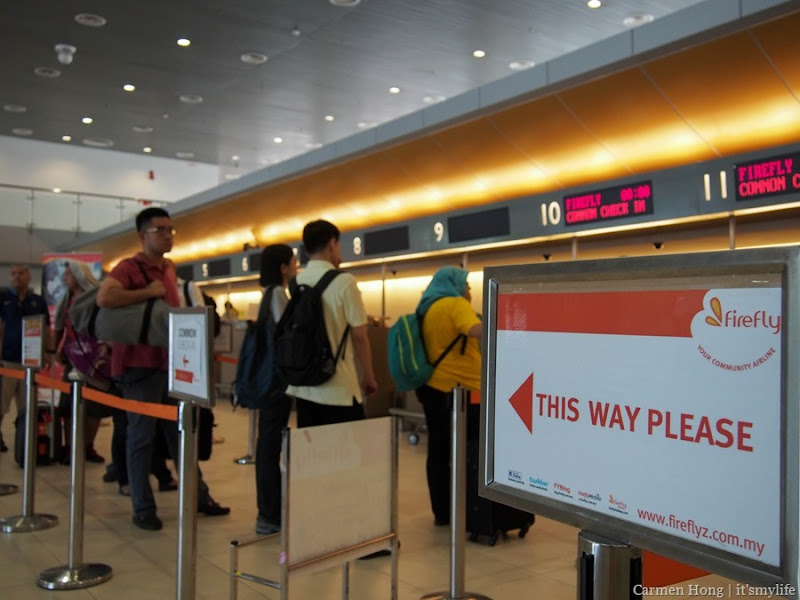 And this is the check-in counter. All together, there is only 13 counters for check-ins, significantly less than KLIA since there are less flights operating here. If I’m not mistaken only Firefly and Berjaya Air fly from this airport. If anything, the whole check in process seems a lot less stressful than in KLIA. Something I’d greatly appreciate especially before I take off to my vacation destination. 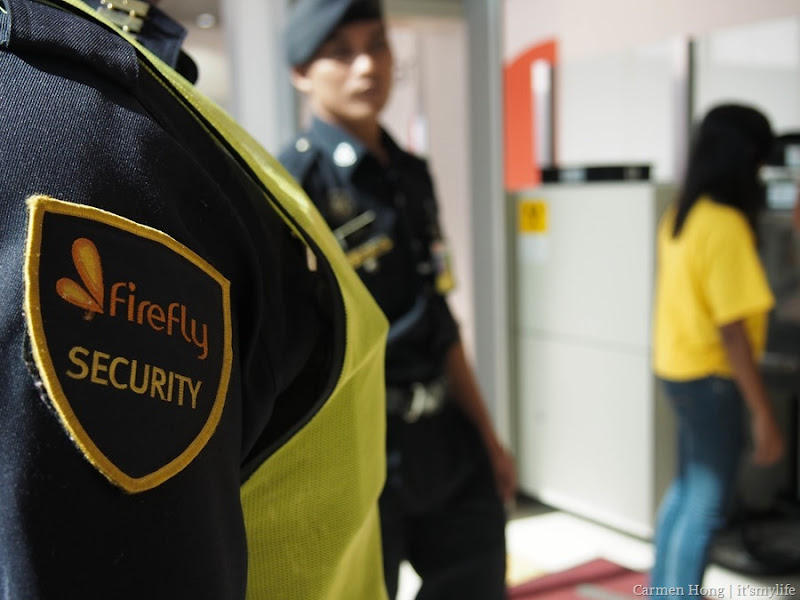 Basically, for the airport tour we started the tour from the passenger’s perspective, starting right from the check-in counter, and then moving on along to the security checks before heading to the departure lounge. 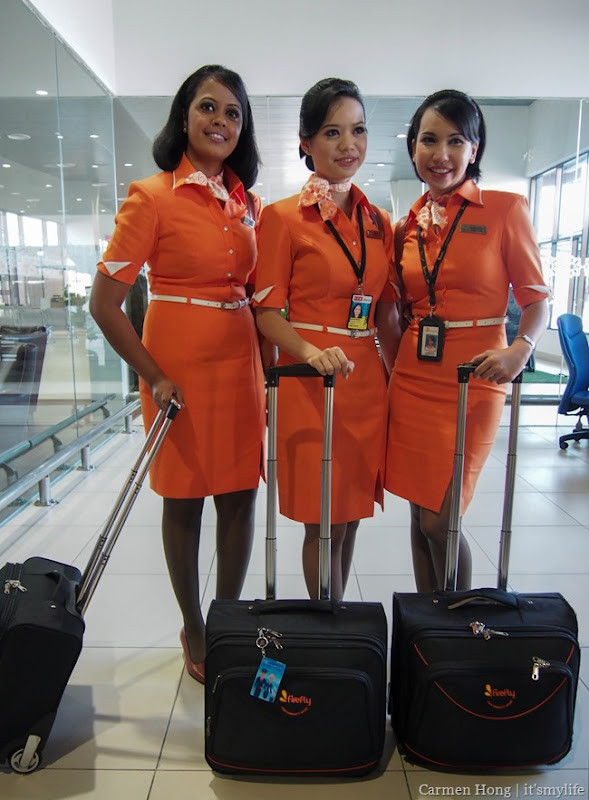 And at the departure lounge, we met these gorgeous air stewardess from Firefly decked in the signature color of the airline, bright cheery orange. 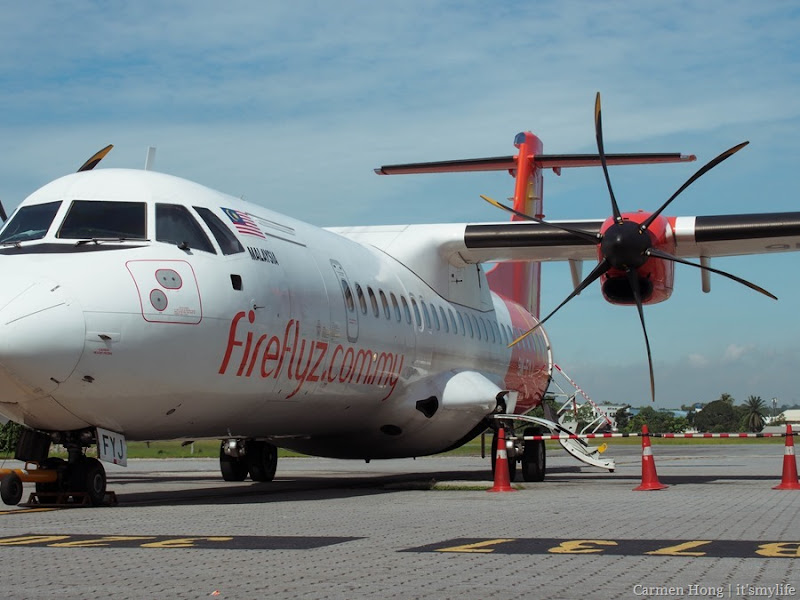 The highlight of the tour would of course, be seeing the propeller fan airplane on the runway strip. 🙂 An airport tour wouldn’t be complete without seeing an airplane, right? This is my first time seeing a propeller plane up close, and it was indeed interesting to see it took off as well. However, we weren’t allowed to get on the runway and we had to stand on the walkway. This picture was shot, zoomed with my Olympus EPL kit lens. 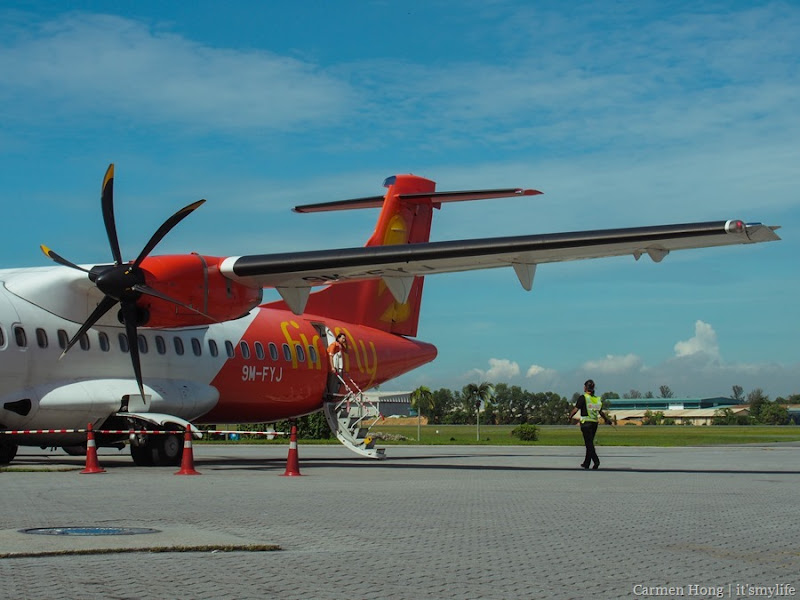 And another picture, before take off. During the take-off, it can get a bit noisy. I do wonder if the noise can be heard from inside the plane. I have never flew with Firefly before, so I can’t tell. I do wish we could have a tour and perhaps, a ride around Kuala Lumpur in the plane. 😛 Now, that would be fantastic. We could probably have airplane food for lunch, and maybe a crash course on how to be air steward or stewardess? 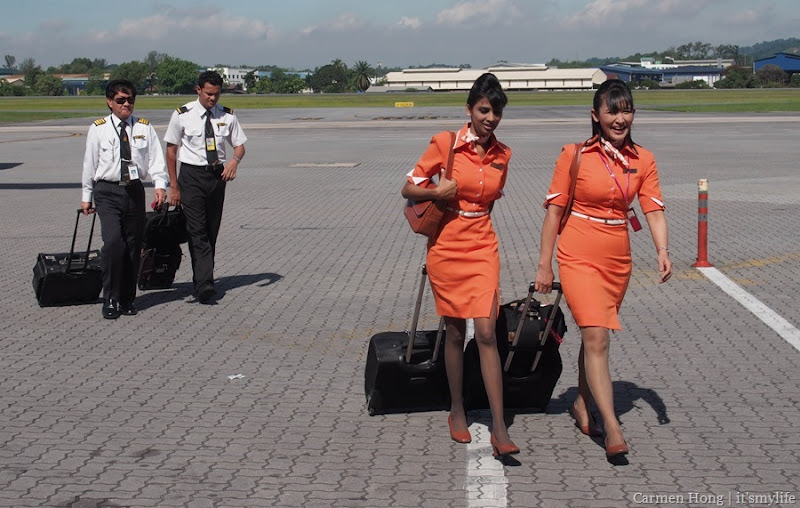 While we were there, we managed to catch the pilots and the stewardess from the previous flight which just landed. I have to say the Firefly stewardess are really friendly and cheerful. 🙂 They were smiling for us, once they saw the lot of us standing by the walkway armed with our ‘weapon’ of choice. Ahem, our cameras.

And, that wraps up the airport tour. The first one I ever been one to. Now I didn’t have any expectation on the tour, prior to this. While it was nice that we managed to walk around the airport, understanding a bit more of the process, I would have loved if we managed to see more behind the scenes of how the airport works. This is in terms of the operation. We were brought into the Firefly control room, but we didn’t manage to see how the control was being handled and no pictures were allowed there. I supposed that could be confidential information there. Even so, it would be nice to hear how the control was being organized. Maybe a mock up would be good. I mean, I have seen those in movies, but I do wonder if it works the same way in reality.

Ah, another thing I would like to see in an airport tour is how the food is being loaded into airplane and how does the stewardess prepares the meal when on board? I always wonder how they do that. Where do they keep hundred packs of food in the plane? I know they are packed into tiny boxes, but still, right? Oh, oh and also the flow of the baggage. You know how you check in your baggage? Where do they go to after that? Is it like in the Monster’s Inc movie, where you have tonnes of door flying around? So, maybe there were tonnes of bag on the conveyor belt? 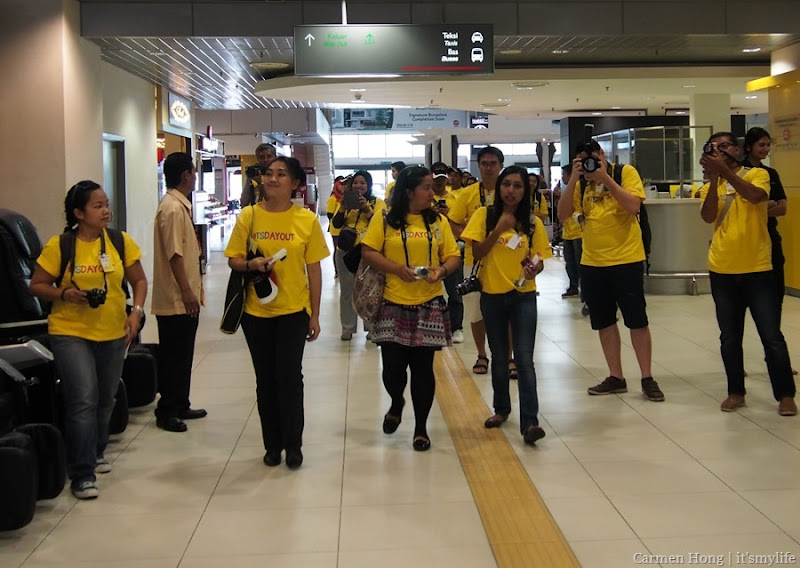 This is just some of us, and going around the air port wearing matching T-shirts feels like I’m back on a school trip to somewhere. Haha. This was shot when we were on our way to the SimFlightKL

If you would love to try to fly a plane without going through the hassle of going to a flying school, you can do that in SimFlightKL. It’s basically a simulation, but definitely much more advanced than those video games one, the controller/buttons/stuffs on the control panel is actually from a real plane. So this is as real as it gets. I tried my hands on trying to land the Boeing 737 and well, I didn’t crash the plane! Haha, it landed but it was off the runway by a bit. Okay, maybe a lot. Haha. 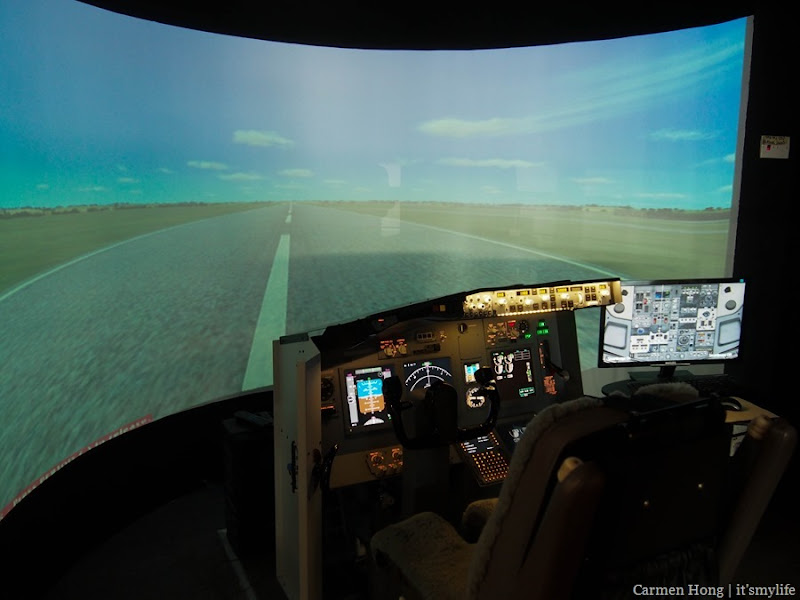 This is the Boeing 737 simulator. A pilot will sit next to you explaining what and how the controls work. And they would basically guide you. As you know, I never been one to play games or like flying, so when she explained, I didn’t understand a thing! I bet the boys would be better at this. 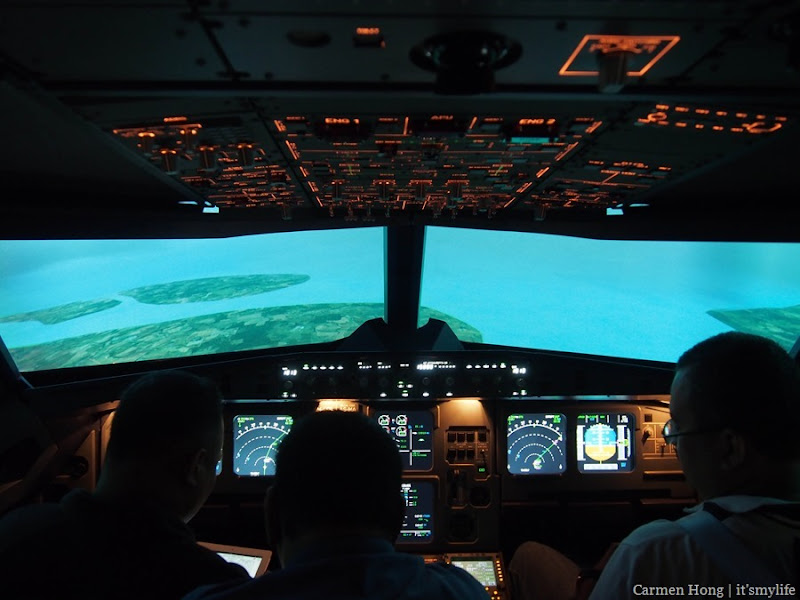 And this is the Airbus A320 simulator. They actually fitted the whole cockpit into the place, and this simulator actually moves. The Boeing one doesn’t, that is just stagnant. This one follows the airplane movement and of course, the screen changes according to where you’re flying to. This is really as real as it can get. You can choose to fly from almost any airport at all. Super uber cool! Didn’t get to try to fly this, but oh well. 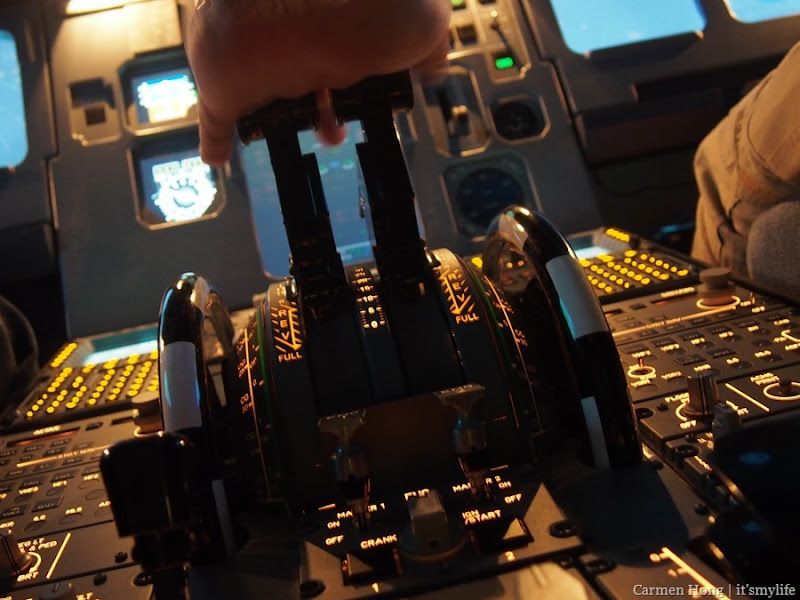 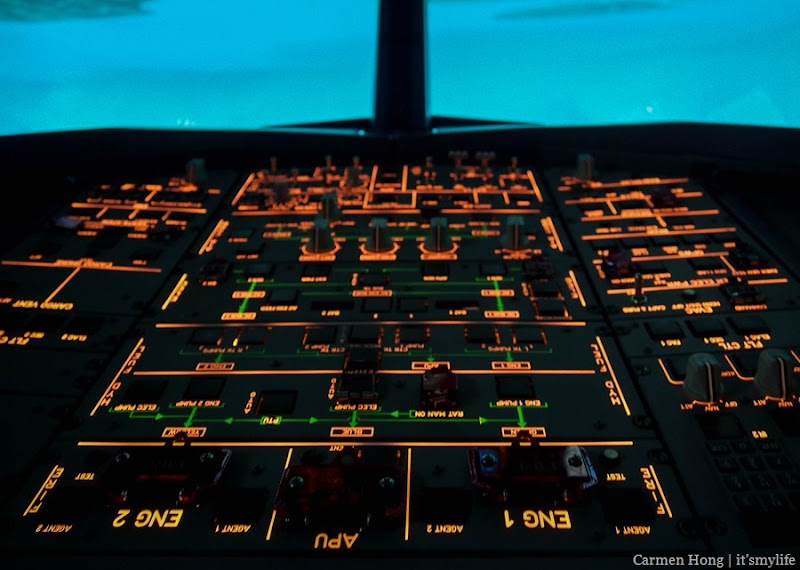 And that’s a wrap of my first ever #TSDayOut! It was a really fun and different experience, visiting the airport again after so long and trying my hands on the simulator. After the session with SimFlightKL, we headed over to the Peugeot lounge to have lunch served by Bubba Gump Shrimp and Co. I love their other food more than their shrimps, to be honest. Heh.

Till next time, lovelies. (Also, I can’t wait to go on the next Day Out!)