Hmm, so which one should I begin on first? The weird ones or the funny (also sort of embarrassing) one? I think I shall start with weird ones. I wouldn’t really consider it as really freaky weird-ish, it is just not normal.

This one happened last Friday after we managed to persuade our Business Maths teacher to release us early so that we could ‘watch’ the Malaysian team in action in the Thomas Cup match. So, anyway most of my classmates went back leaving behind just a handful. I wanted to access the Internet which I can’t do from the East Block because Sun-U WLAN is only limited to the main building. =.= I know. They ought to do something about it. Like, seriously.

So, I lugged my laptop to the almost empty cafeteria and started surfing there. Out of a sudden, an overly excited girl with one of those green bag started talking to me. God, I don’t even remembered what she said now. She started taking out a clear glass bottle, which turns out to be perfume. Next thing I know she sprays it on her hand and then, smudge it on my hand. All this while I was using my laptop. Whaatt. Then, she starts promoting the perfume. Boy, was I lost that time.

When she finally stopped talking, I politely said no. I’m surprised that I didn’t just ran away. Haha. She gives me the creeps, you should have seen her smile. And the best thing is that the perfume is awfully strong and stinks like cheap perfume. Eww. Could have been dog’s pee according to Reuben.

This encounter isn’t as weird and as long as the first one but it caught me by surprise. I was on my way to McDonalds after the scholarship ceremony in Sunway University College. While I was on my way there, a salesgirl suddenly came into my way and asked me, “You must be in college, right?”

I didn’t even know she was talking to me until I saw her smile directed at me. Man. She looked so happy for idon’tknowwhy reason. I was like, “Huh?” and she said, “Oh, you’re working already?”. Me; “No.”  And I walked as fast as I could to McDonalds. God.

Either there is something wrong with me or the salesgirls these days are getting way too creepy and they obviously do not have any sense in being polite. Though I wouldn’t mind if it was cute sales guy instead. Yes, I’m shallow, got a problem with that? 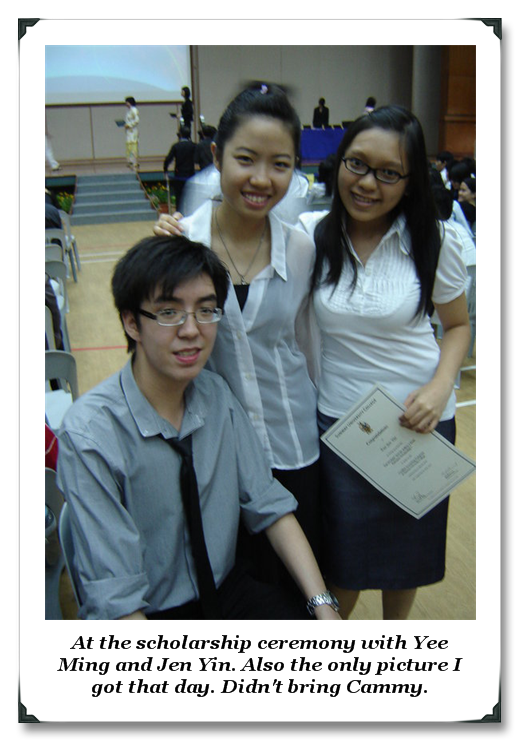 Okay, so now I’m in McDonalds already (it’s on the same day, place at the second encounter) and there was this other guy in the queue in front of me. So, he ordered and stood at the side waiting for his order after he finished placing his order. It’s my turn next, so I ordered what I wanted after he did. I waited patiently for him to get his food, assuming that after his order it would be mine. 5 mins later, he got his order and left. The waiter placed a tray in front of me along with fries on it.

Naturally, I assumed that the tray was my order. And since the waiter was taking eons with my burgers, I thought I’ll might as well munch on the fries first. So, I happily took one, and another, feeding it to my brother this time. I was this close to taking another when the waiter finally came and placed a McFlurry (which I didn’t order ) on the tray…… and in that split second, realization hits me. That tray is not my order! OMZG.

And I’ve been eating from it. And the guy behind him stepped in front to claim the tray. And he was standing behind me all the time, watching me munch on his French Fries. And he took the tray. And I apologized and apologized again. Thanked God, the cute guy smiled and said it was okay. Aww, at least he wasn’t a mean person. He was friendly and nice. And my oh my, I was so embarrassed that time. Lesson learnt; don’t ever assume. It makes an ASS out of U and ME. But in the case, it’s just me. Not the guy.

Holler back at you.

Holler back at you.